Are you considering a trip to Israel? Certainly you should visit Jerusalem, the Dead Sea, and perhaps Masada and Bethlehem.

While I’m not a Christian, all religions are interesting to me in terms of their cultural and historical importance. In Israel, I’ve visited Muslim sites, of which the Dome of the Rock in Jerusalem is the most important. I’ve seen Jewish sites like the Western Wall, Yad Vashem (the Holocaust museum) and Rachel’s Tomb. And I’ve explored the standard Christian sites: the Church of the Holy Sepulchre, the Via Dolorosa, and Bethlehem. 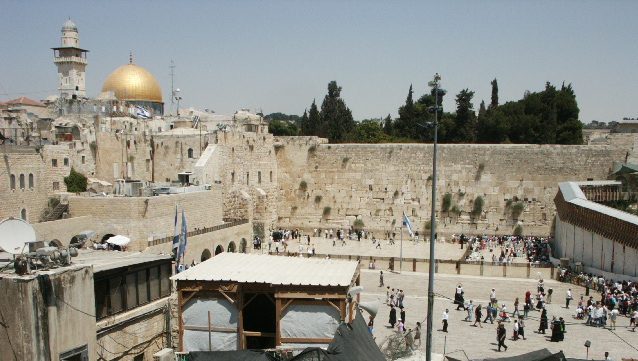 On my most recent trip to Israel, I explored Nazareth for the first time. I also stopped to see some of the Christian sites on the Sea of Galilee (also known as the Kinneret).

While these were relatively minor Christian sites (as compared to the Church of the Holy Sepulchre, believed to be the spot where Jesus’ crucifixion, burial and resurrection happened), I was curious to see them. After all, Christians attach great importance to the Sea of Galilee as the stage for many of the New Testament’s stories.

As an added bonus, I enjoyed the beautiful rolling hills of northern Israel, covered in wildflowers in April, with gorgeous wide-open views over the Sea of Galilee.

Your trip to Israel

My assumption is that if you are a religious Christian visiting Israel on a pilgrimage, you will see the sights around the Sea of Galilee as a matter of course on your trip to Israel.

What follows is a list for the rest of us: non-religious and/or non-Christian visitors to Israel. It is a brief description of five of the Christian sites on the Sea of Galilee, with my recommendations about whether you should see them.

The miracle of the swine is believed to have happened at Kursi. As described in Luke 8:26-39 and Matthew 8:28-34, Jesus exorcised some demons from a man. (In Matthew it’s two men.) The demons fled into a herd of pigs nearby. The pigs then ran to the Sea of Galilee and drowned themselves.

On the eastern shore of the Sea of Gallilee, Kursi is a ruin of a large Byzantine monastery and church, dating from the fifth century AD. Kursi was a place of pilgrimage back in the first few centuries of Christianity, then became one again after it was excavated and reopened in 1982.

Some of the walls around the monastery have been reconstructed, but the rest has been left as ruins. You can see the remains of the monastery, streets, and various small buildings that catered to the early Christian pilgrims.

The highlights, for the non-religious, are the remaining bits of mosaic on the floors of the church and baptistery. It’s only a half-hour visit, I’d say. It’s easy to get to if you’re passing by, but I don’t think I’d go out of my way to see it. 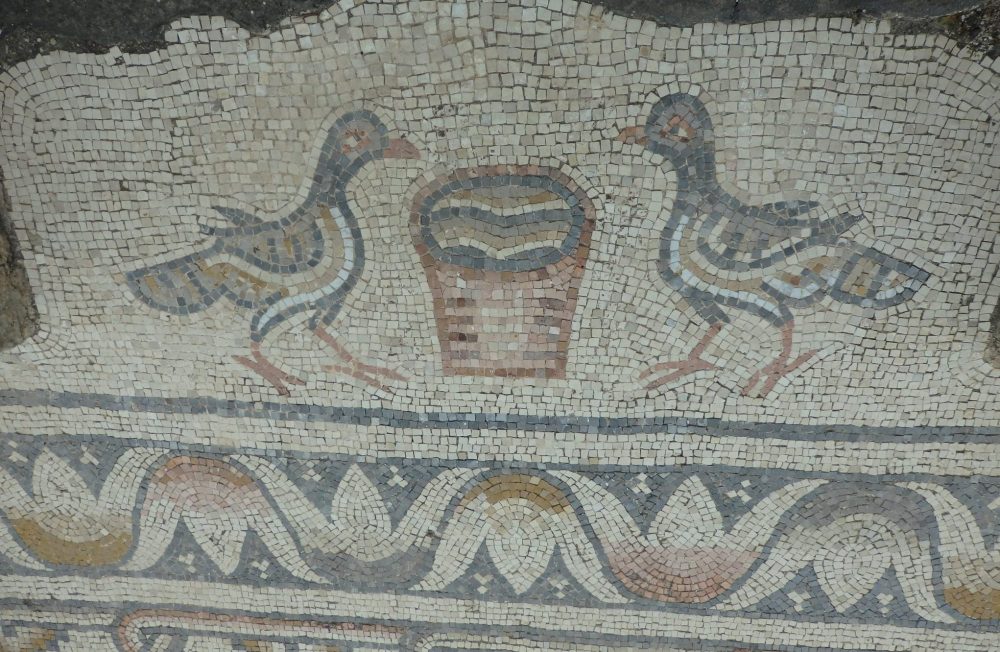 A fragment of a mosaic at Kursi

Capernaum contains two interesting ruins. The first was a synagogue. Some believe it dates to the time of Jesus, while others think it’s a century or two newer. 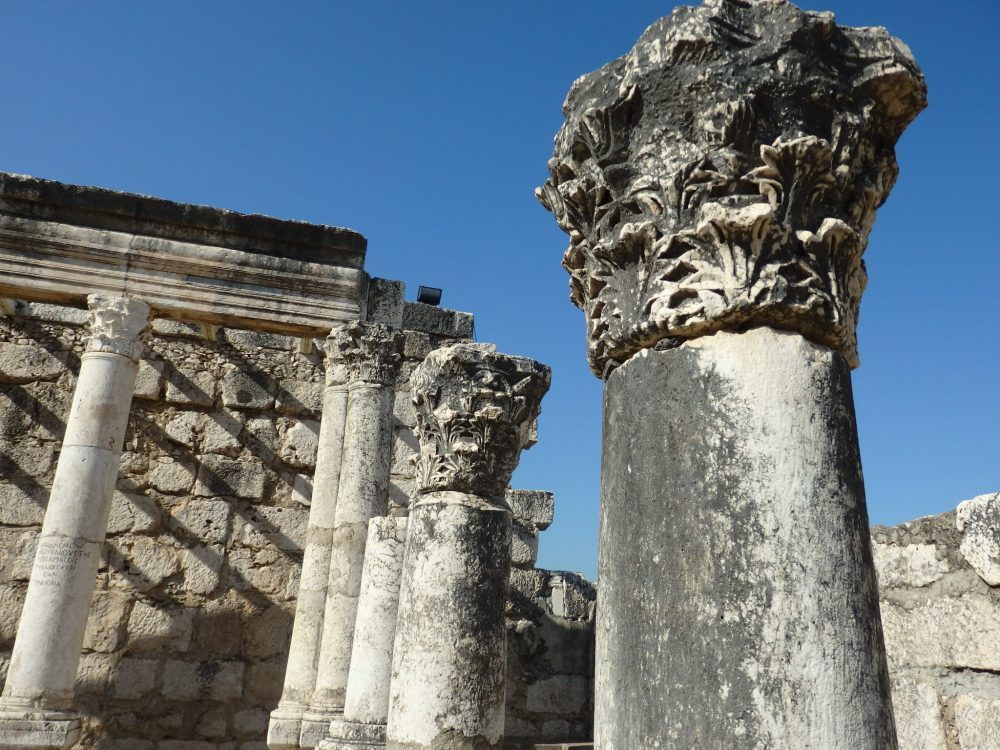 columns in the ancient synagogue at Capernaum

The other is an early octagonal Byzantine (5th-6th century) church, standing on the site of the “House of Peter,” where Saint Peter is believed to have lived.

The ruins of many houses around the synagogue and the church vary in date from hundreds to thousands of years BC.

In 1991 a new memorial was built right on top of the remains of the House of Peter. It was meant to protect the remains and to serve as a place of worship for Christians. 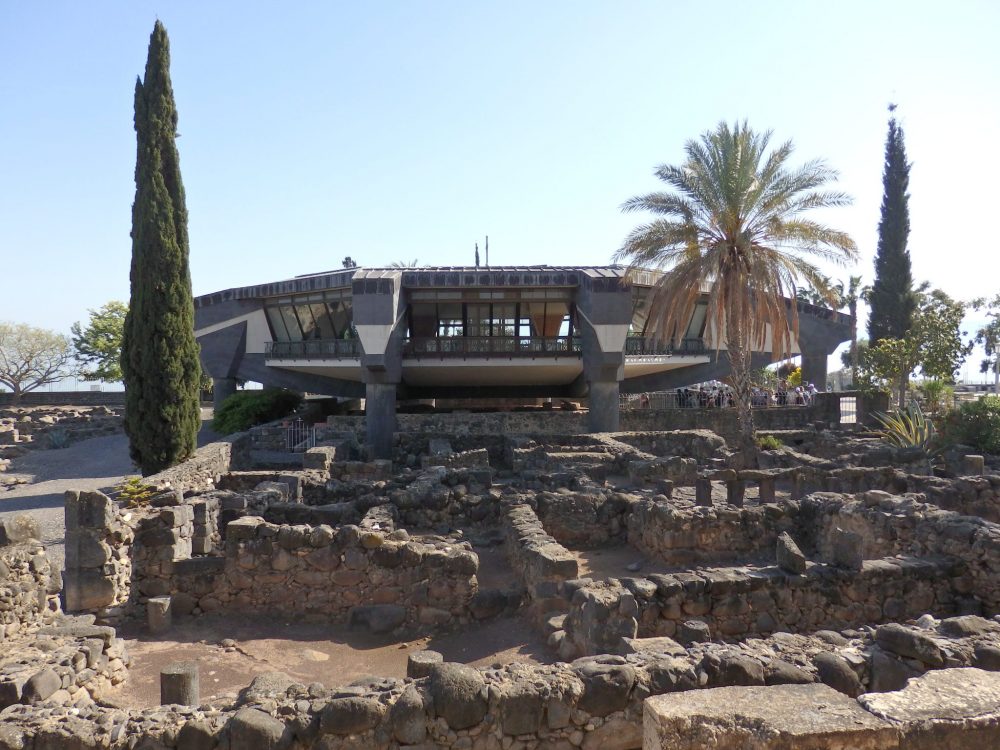 This “memorial” was built in 1990 as a shrine and to protect the House of Peter and Byzantine church underneath it.

Does anyone else see how much it looks like a flying saucer landed?

Again, unless you are religious, this site will only take about a half hour to explore.

Another short stop on the Christian pilgrimage route is Tabgha. This is believed to be the place where Jesus performed the miracle of the loaves and fishes to feed the multitudes (Mark 6:30-46 and Matthew 14:13-21). He is also believed to have healed a leper here, and appeared here after his crucifixion (John 21:1-24). His walk on the water happened near here too.

The Church of Heptapegon (Seven Springs) is a 1980s church on top of the rock where Jesus is believed to have laid out the bread and fishes.

Inside, you can see the original mosaic floors from an earlier Byzantine church dating from 480 AD. Under the altar, a piece of the rock is visible. 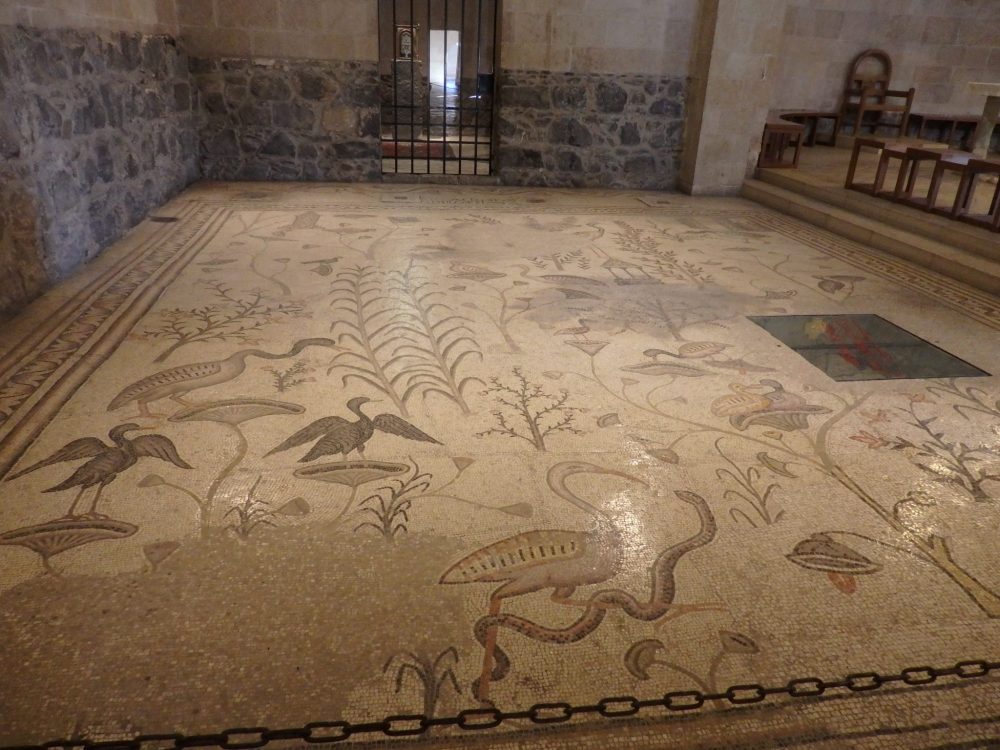 a richly decorative mosaic floor in the church at Tabgha

These mosaics are in much better shape than the ones in Kursi, with some wonderful images of birds. If you don’t have time for both, and you want to see ancient mosaics, this is the one to choose.

The Mount of Beatitudes is a short drive uphill from Tabgha. Believed to be the place where Jesus delivered the Sermon on the Mount, it is now topped by a 20th century Roman Catholic church. The views over the Sea of Galilee make it worth a stop and a stroll around the well-maintained grounds. 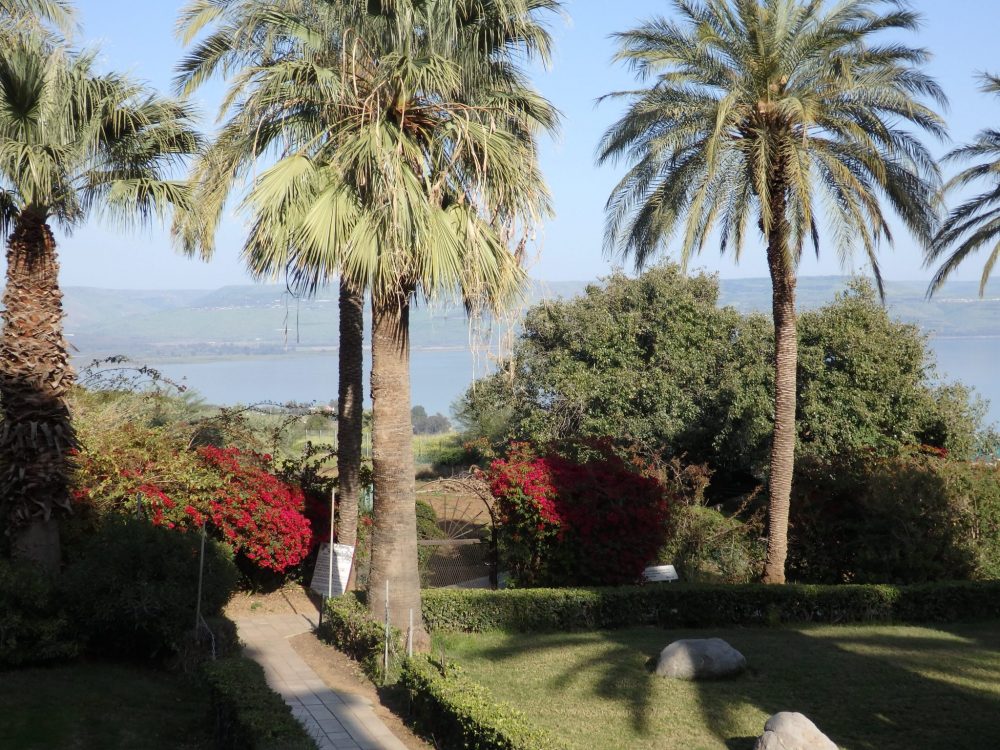 The garden on the Mount of Beatitudes, with the Sea of Galilee visible in the distance.

I was hoping for more when I visited the “Jesus boat” on the northwest shore of the Sea of Galilee. I knew it wouldn’t be like the Vasa, the amazingly well-preserved ship on display in Stockholm. But still, I felt disappointed.

The Jesus boat was found in the mud of the Sea of Galilee in 1986. It has been preserved in much the same way as the Vasa, a process that took 11 years. 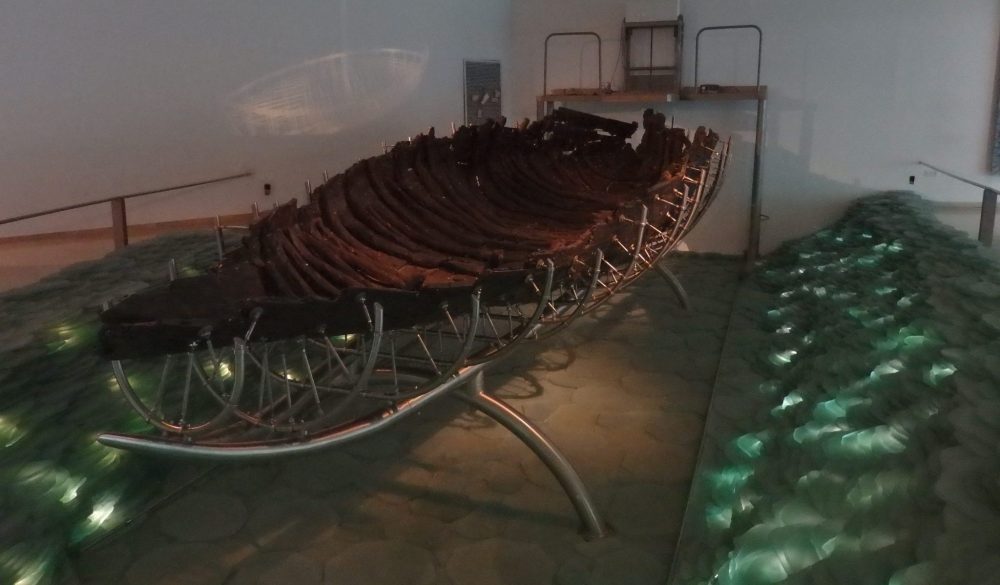 the “Jesus boat” in Tabgha

The size, the types of wood, the signs of repair on the boat: all indicate that this was a simple fishing boat belonging to a poor fisherman.

The exciting part of this find, for archeologists and Christians, was the evidence that the boat dates to Jesus’s time. Many descriptions in the New Testament mention Jesus traveling by boat: what if this was the actual boat that Jesus used?

Of course, there’s no way to prove that he used this particular boat. Nevertheless, what is officially called “The Ancient Galilee Boat” is often referred to as the “Jesus boat.” You can see it at the purpose-built “Miracles Center” whose tag line is “Where HISSTORY comes alive.” (Get it?)

I wouldn’t go out of your way to see this one, though. It’s only a small boat skeleton, displayed in a dark room, with a few explanatory signs on the wall.

When you’re planning your trip to Israel, consider some of the other sights near the Sea of Galilee. 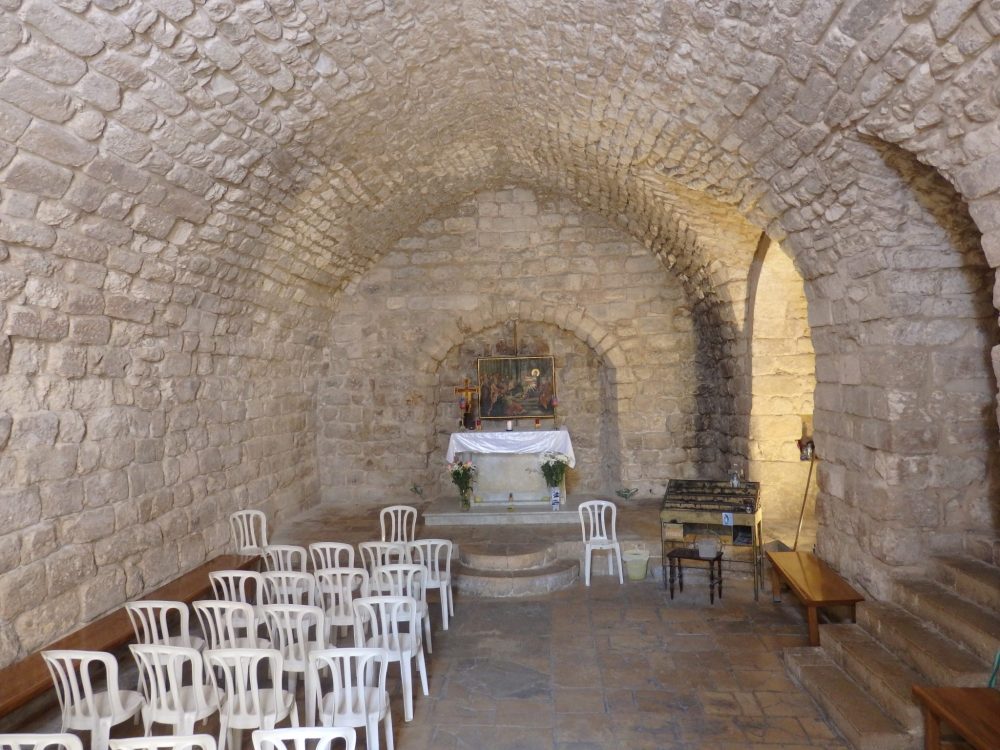 The “Synagogue Church” is one of many churches in Nazareth.

So when you plan your trip to Israel (and you should!), consider visiting these northern sites as well. You won’t regret it.

Did you go to any of these places on your trip to Israel? What, to you, is unmissable?