A 24-hour ceasefire has been agreed, and swiftly failed. Palestinian civilians are suffering terribly – many dead and wounded, houses destroyed, shortage of food – and Israelis, particularly in Ashkelon, are living in fear of the next rocket attack. Only the politicians on each side seem to want this war to continue.

Nevertheless, I insist on believing that a way will be found out of this impasse, and Jerusalem can again become the much-touristed city that it often is.

This post is about one of the most popular destinations in Jerusalem: the Via Dolorosa. The Via Dolorosa is also known as the Stations of the Cross: the steps taken by Jesus from conviction to resurrection. The exact route is disputed, but yesterday we walked the currently accepted stops. 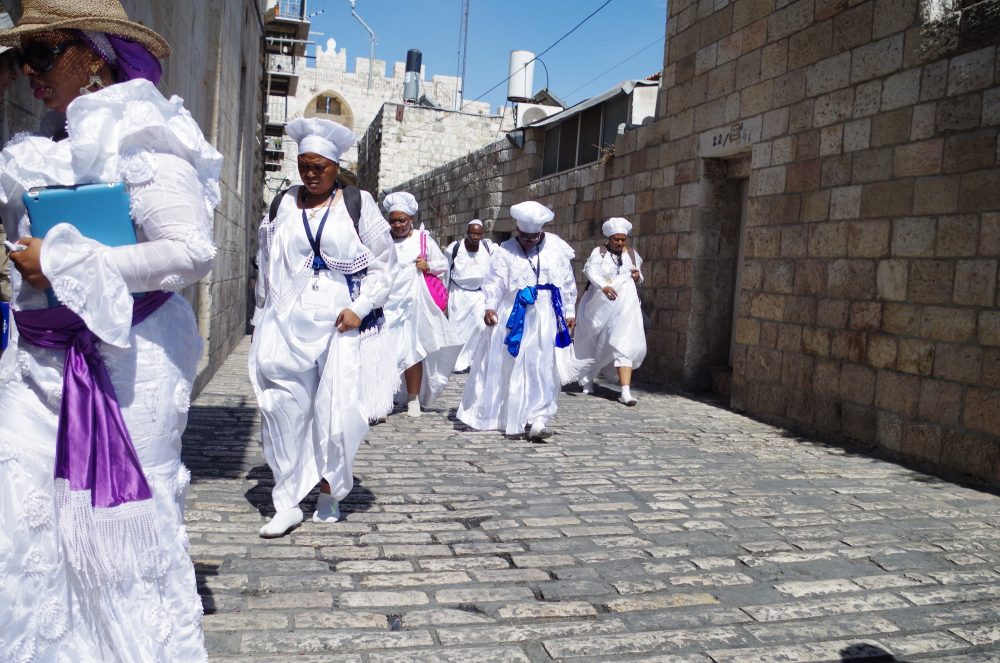 Pilgrims on the Via Dolorosa (photo courtesy of Anne Hellersmith)

Keep in mind that we are not Christians, nor are we religious. Many, perhaps most, people who walk this route are pilgrims: they have come to Israel because of their faith, and wish to see and touch and be touched by the places where Jesus walked. If you come here, you are likely to see such pilgrims, sometimes carrying crosses to feel even more deeply how Jesus felt as he carried the cross to the place of crucifixion. 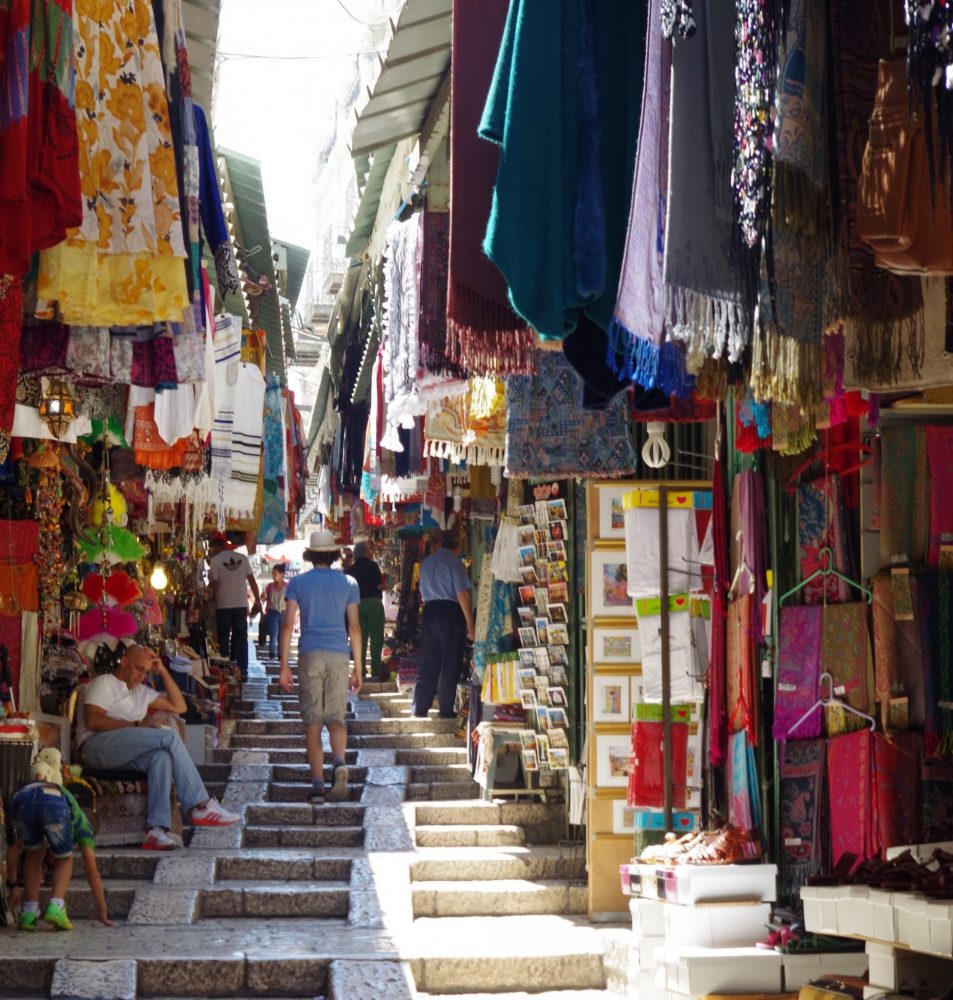 along the Via Dolorosa (photo courtesy of Anne Hellersmith)

As we explored the Via Dolorosa, we followed a large group of Nigerian pilgrims, all dressed in white, who sang hymns at each stop as they went. Many of the stops are nothing more than a mark on the wall, such as the one designating the spot where Veronica wiped sweat from Jesus’s forehead, or a small chapel, like the one where Jesus is said to have fallen for the second time.

What’s fascinating is that the route winds through the Muslim quarter of the city, and it’s lined with small shops selling souvenirs of all sorts. And when I say “all sorts,” I mean I was struck by the equal-opportunity approach to selling souvenirs. There were Christian items such as crosses and rosaries, Muslim items such as prayer beads, and Jewish items such as stars of David and menorahs. The storekeepers were all Muslim, I think.

I also noticed that the shopkeepers were much less pushy towards the passing tourists than during my past visits, even though there were far fewer tourists than normal on a typical Saturday. In the past I got annoyed by how the shopkeepers never seemed to be able to take “No, thank you!” for an answer, and would keep insisting that I come look at their shop. This time, a simple “No, thank you!” had the desired effect. Western tourists don’t like to be pushed, and perhaps that message has gotten through. Or perhaps business is so bad that a certain level of despair has set in. 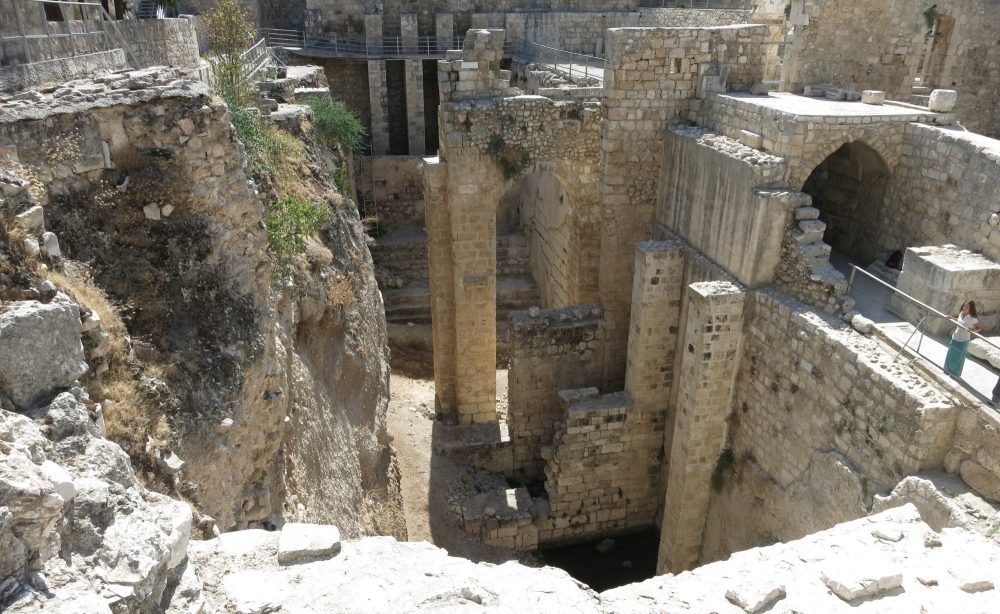 The ruins of the pool of Bethesda next to St. Anne’s Church on the Via Dolorosa

There are several interesting stops on the Via Dolorosa. The crusader-era Church of St. Anne is the site of the pools of Bethesda, and a lovely island of calm in a noisy, crowded part of the city.

If you’re lucky and the Al-Omariyeh school is open, you can go upstairs to a window overlooking the Dome of the Rock for a great picture-taking opportunity. The entire Temple Mount is closed to tourists right now, so this will be the only glimpse we’ll get this visit. 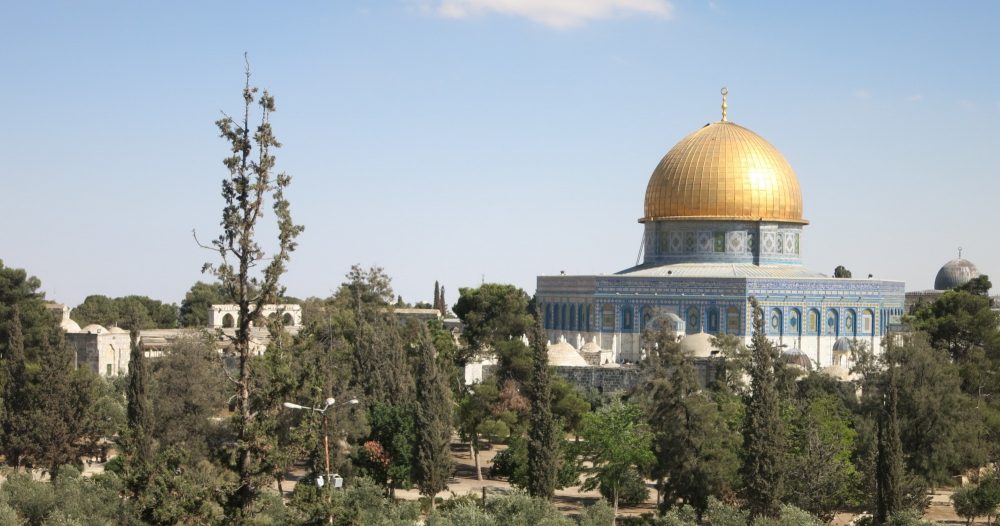 view of the Dome of the Rock from the school

The highlight, though, of the Via Dolorosa, is the Church of the Holy Sepulchre. I’ve visited here on every trip to Israel because it’s such a fascinating place.

There isn’t any. Or rather, it’s a mishmash of everything. The exterior is awkwardly framed by the neighboring buildings, with none of the grace of the great European cathedrals like Notre Dame. The central hall, if you can call it that, is lined with Roman columns, presumably from an early shrine. The floors are paved with stones from different periods, worn to different degrees depending on their age, with steps up or steps down for no apparent reason. Much of the building is medieval or Byzantine, and it’s been added to, modified, damaged and rebuilt so many times over the centuries that there seems no rhyme or reason to its layout. 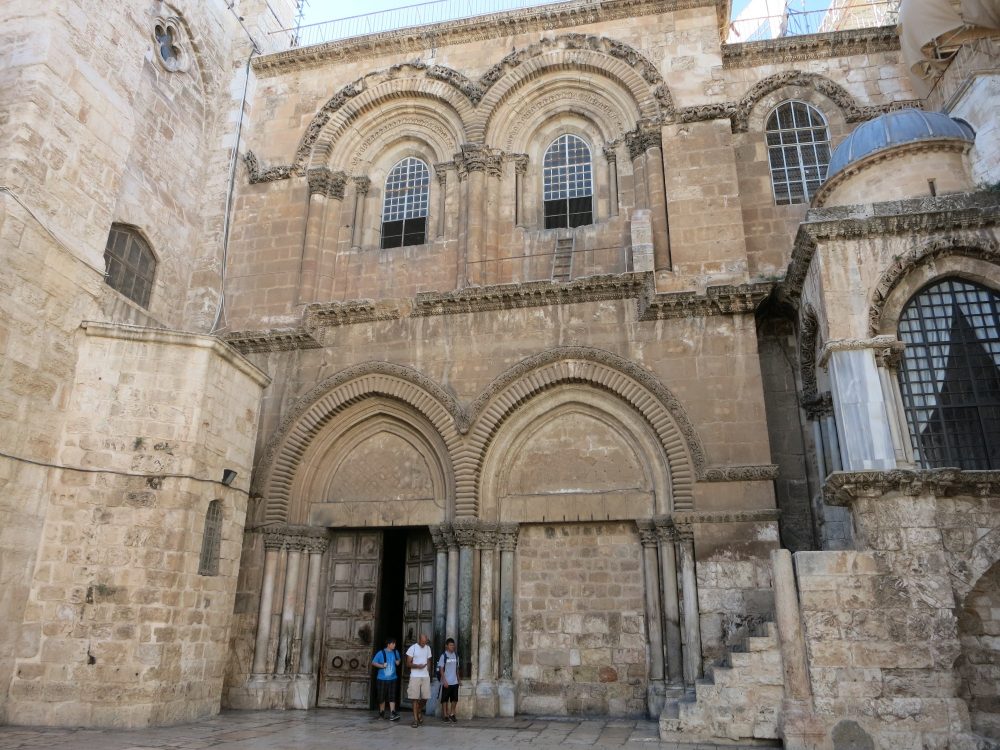 the front of the Church of the Holy Sepulchre

The Jews and the Muslims aren’t the only ones who have trouble getting along in Jerusalem. A range of ancient Christian sects shares this church, and that, apparently, leads to conflict from time to time. The sects follow a strict schedule of worship so that they all get a turn. Stay in the church for a while, and you’re likely to see a “service” taking place, with, for example, Greek Orthodox priests chanting prayers. Every so often a series of bells chime and clang loudly, presumably to sound the changes of turns. 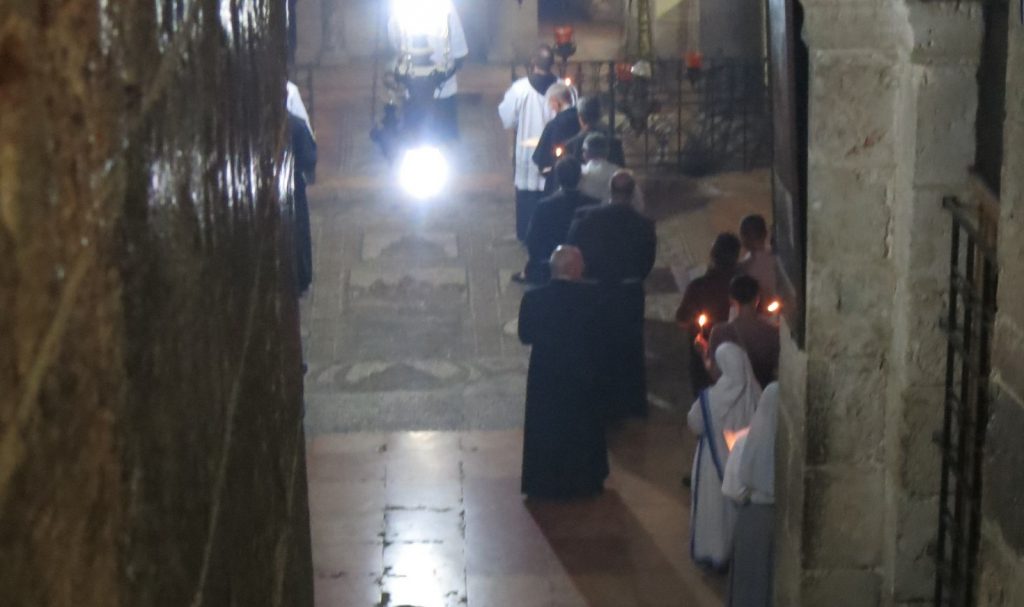 one sect or another holding a ceremony in an underground chapel

Each different sect has claimed territory as well. Up a steep stairway is a Franciscan chapel, the 10th and 11th stations of the cross, where Jesus’s clothes were removed before the crucifixion and where he was nailed to the cross. Next door is the Greek Orthodox chapel, the 12th station, where Jesus is said to have been crucified. The tomb itself, which all the sects share, is the 14th station, but the Coptic Church has added a small chapel to the back of it. Up a back stairway are two more chapels: one is Ethiopian, I think, and I’m not sure about the other.

For many Christians, visiting the Holy Sepulchre is a matter of faith, and that’s certainly visible if you stay a while and observe the other visitors. 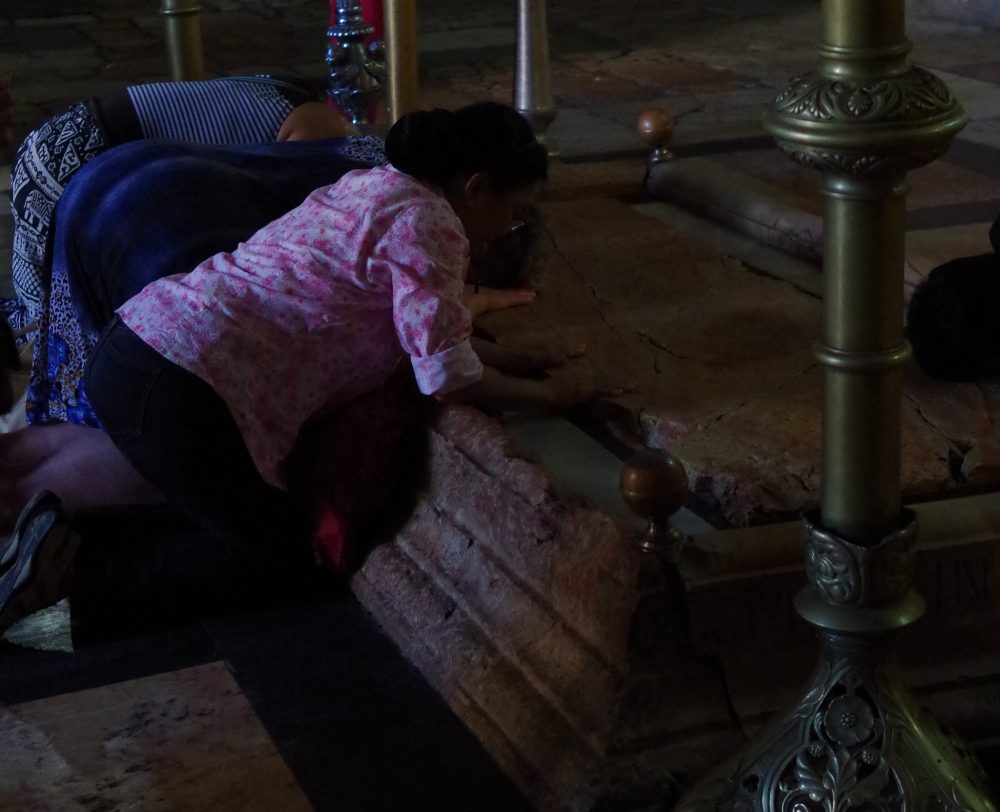 Just inside the entrance to the church is the slab on which Jesus is said to have been washed before burial. Visitors kneel with their hands on the rock, and sometimes kiss it. The same happens in each of the chapels; for example, in the Greek Orthodox chapel it is possible to crawl under the altar and kiss the stone where the crucifixion is believed to have taken place. If you are dressed modestly, you can enter the Holy Sepulchre itself, a slow process since only about three can enter at a time and many stay a few minutes to pray. To enter it requires bending down to enter the very low doorway. 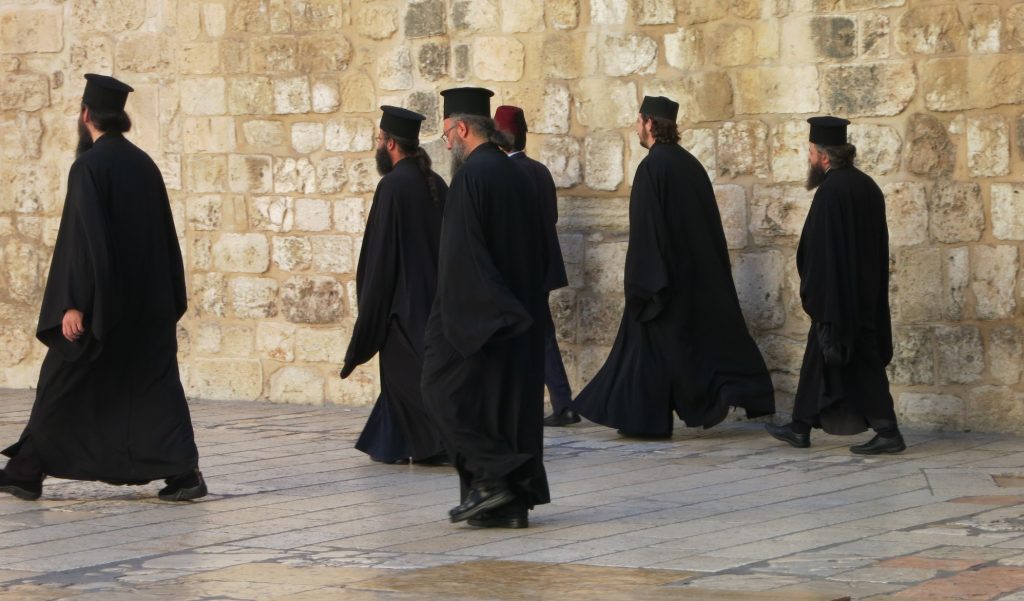 spotted outside the church

Don’t rush a visit to the Holy Sepulchre, even if you’re not a believer. Spend time inside listening to the singing and chanting. Sit outside on the plaza in front of the entrance and watch the variety of the faithful come and go.

“Via Dolorosa” means “Way of Sorrows.” The Gazans and the Israelis are wandering their own way of sorrows right now. I hope that someday soon that will end, and they can come and walk this ancient one instead. The Christian sects manage to share space through compromise; someday perhaps the Palestinians and Israelis can do the same.

If you want to read my earlier posts about this trip to Israel, here they are: Why I’m in Israel and The Mundane in Jerusalem.