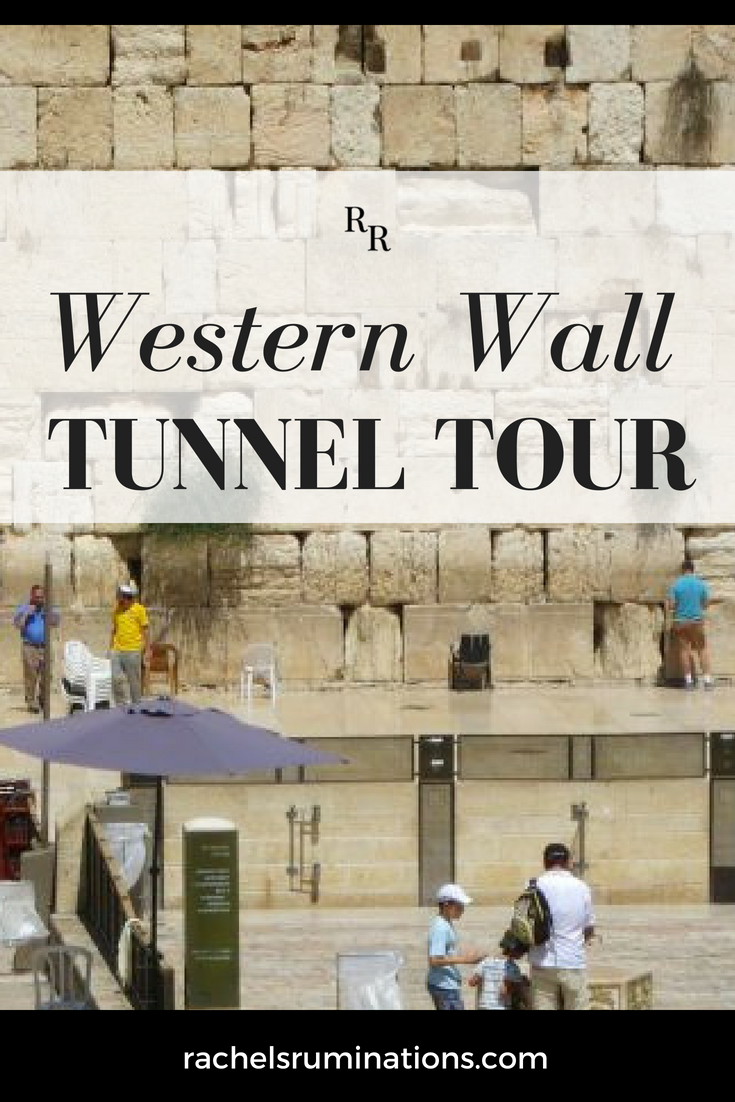 If you visit Jerusalem’s old city, you will surely see the Western Wall. It’s as if the large plaza at the center of this ancient place draws you in like a magnet. All roads don’t lead to Rome; they lead to the Western Wall.

Yet the Western Wall is more than the most holy place in the world for Jews. It’s more than just a wall. It embodies a huge span of Jerusalem’s history and the history of two religions. And it is even bigger than it seems.

All roads don't lead to Rome; they lead to the Western Wall. #jerusalem #westernwall @visit_israel Click To Tweet

History of the Western Wall

The current Western Wall – the famous one in all the pictures – is actually only a small section of a much larger, mostly underground, wall. It extends for half a kilometer to the north and south and reaches 17 more meters down into the earth.

The wall was originally built as a retaining wall to support the Temple Mount, which was leveled off and filled in over the ages. The last Jewish temple on the mount – the Second Temple – was destroyed by the Romans in 70 CE, leaving only the retaining wall. In the middle of the Second Temple stood the Holy of Holies, an area that only the highest priests of the temple were allowed to enter. For this reason, religious Jews do not go up on the Temple Mount, for fear they will inadvertently step on the place where the Holy of Holies stood. Instead, they pray at the base of the exposed piece of the wall.

Inside the Dome of the Rock is an exposed section of the bedrock of the hill, a spot that is important to both Jews and Muslims. It is said to be the spot where Abraham bound Isaac, preparing to sacrifice him. It is also, according to the Muslims, the place where Mohammed ascended to heaven.

In the centuries after the destruction of the Second Temple, the city grew around the walls of the Temple Mount, which is why so little of it is now visible. The Western Wall Tunnel Tour (also called the Kotel Tunnel Tour) allows tourists to take a look at a section of the wall that was invisible for centuries.

After an explanation of the successive stages of building the Temple Mount, the Western Wall Tunnel Tour is essentially a walk through a tunnel: first toward the wall, and then along the wall, with occasional stops for explanations.

Stones from successive periods are visible, and the guide explains their characteristics. The sheer size of some of the building stones down below ground level is phenomenal: up to 13+ meters long, 4+ meters wide and 3+ meters wide. The largest weighs over 500 tons. These stones raise lots of questions: how did they do it? And why? Why use such large stones?

At the spot that is believed to be the closest to where the Holy of Holies was, the tour comes upon a tiny room, hardly more than a widening of the narrow corridor, where Orthodox Jewish women are busy praying. Further on, another chamber conjures images of a Roman marketplace: pillars remain in front of what might have been a storefront.

Toward the end of the walk, the built walls end and natural bedrock replaces it, carved to match the masonry of the built walls. This part of the tunnel served as as an aqueduct to move water to the temple, and the walls have been smoothed by the water.

The tour exits in the Muslim Quarter of the old city: a rather abrupt transition from the dark cool of the tunnels to the glaring hot sun outside. I never felt like I was in any danger in the Muslim Quarter, yet two guards joined our tour as we exited, ready to escort us back to the Western Wall. Given that this was exactly where we walked the other day – without a guard and without any difficulty – on the Via Dolorosa, this seemed a bit paranoid to us, so we ditched the tour at that point.

If you’re interested in a deeper (no pun intended) look at the history of the Temple Mount, and you’re not particularly claustrophobic (the tunnel gets pretty narrow in places), then this tour is certainly worth an hour and a quarter of your time.

The Kotel Tunnel Tours have become very popular, though how busy they are depends on the political situation and whether tourists have been scared away from visiting or not. To be sure, book ahead here, but even if you don’t book ahead, it’s worth seeing if you can still get a place on a tour. Visitors are only allowed to visit on a guided tour.

The tunnel tour runs Sunday-Thursday 7:20 until late. Friday-7:20-12 noon. Saturday evening after sunset only by reservation. Admission fee: 35 NIS (€8 or $10). The entrance is on the north side of the Western Wall plaza, to the left as you face the Western Wall.

Another option is to see the tunnels as part of a larger tour. This 4-hour “Holy City Tour” includes the tunnels, but looks at sites important to all three major religions in Jerusalem: the Muslim sites on the Temple Mount, the Christian sites related to Jesus’ life, and the Jewish sites, including the Western Wall and the tunnel.

To enter the Western Wall plaza, you’ll first need to pass through a security check, having your bag searched and/or scanned. Walking downstairs to the plaza itself, you’ll see that the Western Wall part of the plaza is divided into sections by moveable walls. Orthodox Jews separate the sexes for prayer, so the larger left side is only open to men; the right is for women.

If you are male and wish to approach the men’s side of the wall, that’s fine, but be respectful by keeping your voice down and not disturbing people who are praying. You need to wear a hat or a kippah, a small head covering like a beanie. If you don’t have one, you can get a paper version at the table near the entrance to the section. If you are female, the same respect is necessary, as well as conservative dress, not showing too much skin. Like the men, you should cover your head: a simple scarf will do. Often there is a table at the entrance with scarves you can borrow.

You’ll notice, by the way, tiny bits of paper filling the cracks between the massive stones of the Western Wall . These are prayers. As the closest point to the Second Temple, the faithful see this place as the closest they can physically get to God.

Visiting the Temple Mount can be a little hit or miss. I went there once many years ago, but every time I’ve tried to go there again, something has stopped me.

My advice: get there early. The entrance is at the bottom of the walkway bridge you can see in the photo above. It is, in theory at least, open in the winter from 7:30-10:30 and from 12:30-13:30, and in the summer from 8:30-11:30 and 13:30-14:30, but it can shut down at a moment’s notice and for weeks at a time. Admission is free. Dress conservatively and behave respectfully. You can enter the Al-Aqsa Mosque and the other sites on the Temple Mount, but you can’t enter the Dome of the Rock unless you are Muslim.