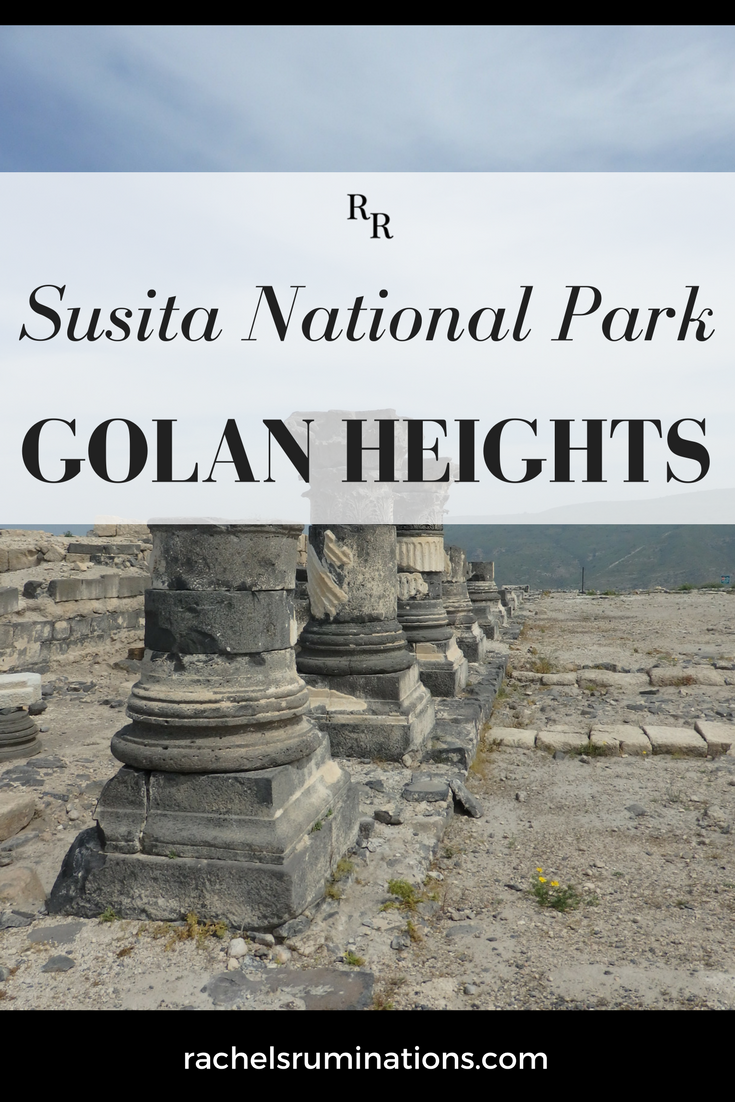 I never would have visited Susita if it hadn’t been for Sara Zafrir, owner of Genghis Khan in the Golan. When I asked her what to see in the Golan Heights, she insisted that this was a “must-see.” I’m so glad I took her advice.

Disclosure: Sara sponsored me to stay in one of her yurts for free. You can read about that experience here.

In my small rental car, accompanied by a fellow blogger, Seanna Fallon of Seanna’s World, I set off. Once we left the main road, the pavement got progressively worse, at times more pothole than asphalt. It was chilly day, but in all directions were the green rolling hills of the Golan Heights, covered in wildflowers.

Eventually, after a particularly impressive pothole, we spotted the Israeli National Park sign for Susita, also known as Antiochia Hippos. There was no entry gate, no parking lot: just a sign. We pulled over, parked the car along the road, and set off on a dirt path up a hill.

Susita was founded in the 2nd century BCE, though archeological evidence shows some prehistoric habitation.

Sitting on a spur of mountain, surrounded on three sides by rivers, it was a safe location to build. It became a city, surrounded by walls, starting in the 2nd century BCE.

Water was provided to the city using an aqueduct from the Golan 24 kilometers away. Then the water moved up the hill using a pressure system: quite sophisticated for its time.

Most of the residents were Christians when Susita was at its peak, and it may have held eight churches. A small Jewish community lived there too. The ruins at Susita today mostly date from between the first century BCE to 749 CE. In that year, an earthquake destroyed the city. You can read a much more detailed history on Wikipedia.

The path climbs upwards along a ridge. On our left was a steep drop, but a wire fence kept us safe. On the right, the drop was less steep, but rolls of barbed wire and signs warning of minefields kept us on the path. The views beyond the barbed wire were, at times, breathtaking.

The first structure we came upon was decidedly not ancient. Looking like it was going to collapse at any moment, it consisted of an improvised bunker, with a roof of metal covered in rocks, held up by a few wooden beams. Susita was an army post during the period between Israel’s war of independence in 1948 and the Six-Day War in 1967. I assume the minefields nearby stem from the same time period.

Soon after the bunker, we started seeing rocks scattered about that were pieces of ancient structures, judging by the still-visible decorative details.

At the top of the hill, we were astonished to see an intact Roman-era road stretching out in front of us for 550 meters. The large black blocks fit together well, and the surface was, frankly, in better condition than the road I’d driven to get here.

The road reaches all the way to the far end of the spur of land on which the city grew. Sunken a bit, the road is lined with the remains of walls on either side. Here and there we spotted more bits of buildings, particularly pediments of columns and other decorative stonework.

Passing two abandoned buildings from Susita’s army post days, we came to what was once the center of the city. While there was one sign at one of those army buildings explaining the ruins, we saw no specific explanatory signs, nor was there the usual tourist leaflet.

We wandered through the ruins. We could certainly tell that the city was crowded and, in places, quite fancy, judging by the sheer number of columns lying on the ground. The one informational sign mentions several roads, a main square, a temple, a basilica, a sanctuary containing Hellenistic and Roman temples (later replaced by a church), another church, an Odeion (a small theatre that could hold 500 people), the fortification walls, a bastion, a bathhouse, and houses, though it doesn’t specify how many.

If you like this article, you’ll also like these about other things to see in the Golan Heights and nearby: Defense (with a view) at Belvoir Fortress, Um el Kanatir: ancient synagogue in the Golan Heights, and 5 Christian sites near the Sea of Gallilee. All of these would combine well with a road trip including Susita.

While we wandered about, I recorded a Facebook Live video. Unfortunately the reception wasn’t good, so only parts of it have clear pictures. It also just shut down at one point, and stopped by itself before I meant to stop it. I haven’t edited it at all, but I’m including it here because it shows you the extent of the ruins.

I should also point out that I was wrong in this video when I said the modern buildings date from the Six-Day War in 1967. They were in fact part of the border defenses against Syria until Israel took the Golan Heights in 1967. At that point the army abandoned it.

It was strange to wander around there by ourselves. (We did spot one other person, and later a group of Israelis arrived as well.) Not catering for tourists at all, except for the occasional fence and “danger” sign, it was remarkable to see such extensive ruins seemingly abandoned. This city was large and prosperous, and its residents had a water supply and beautiful views.

Another thing I was wrong about in the video: apparently the reason we didn’t see any archeologists at the site is that they only work on it during “excavation season” every summer. If you want, you can even sign up to go and help with the excavations! The information is on the website of Hippos-Sussita Excavations Project.

The population of Susita might have abandoned it after the earthquake, but I’m glad it’s being excavated, and I’m glad we went there. It will stand out in my memory as a special “find” from my time in Israel: my favorite of the Golan Heights sights.

Have you seen any special off-the-beaten-track places lately? Please tell about it by adding a comment below!

The images below are perfect for pinning!

Susita is only about a couple of kilometers east of Ein Gev, a town on the eastern shore of the Sea of Galilee, and several hundred meters higher. I found the road by using a tourist map of the Golan Heights, supplemented by asking directions in Ein Gev. I’d suggest you do the same, because it’s a very small, rough road, and it’s not well signposted. No admission fee. Wear strong shoes and stay on marked roads and paths! If you’ll be there in the evening, bring a jacket.