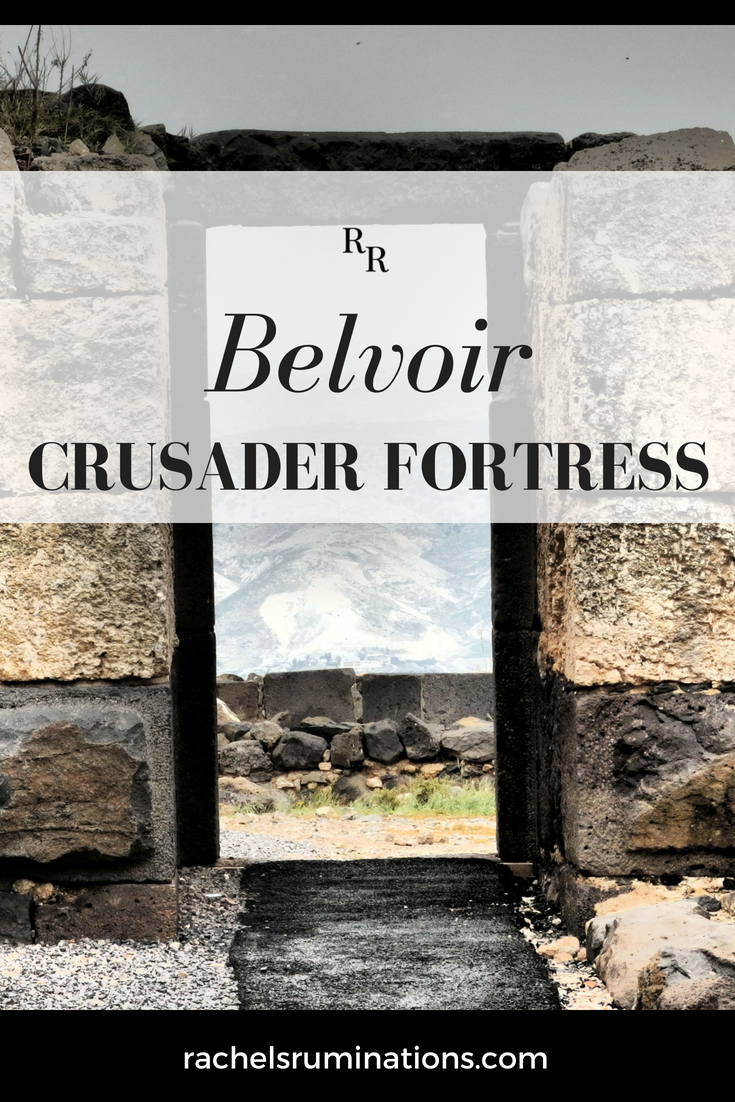 The Crusaders, arriving in what is now Israel back in the 12th century, didn’t waste any time staking their claim. Their effort to dominate and control the “holy land” for Christianity was bloody and misguided and, in many ways, shameful. Yet it has left us some fascinating historical structures to study and enjoy.

I’ve already written about one of these at Akko, the main port city used by the Crusaders. I also visited a lesser-known Crusader fortress: Kokhav Hayarden National Park, commonly known as Belvoir.

In some ways, Belvoir is more impressive than Akko. You can see more of it, for one thing. Akko’s fortress is mostly underground and the city surrounds it. Belvoir Fortress is in full view.

The fortress has the classic square shape, just like the fortress walls that children construct at the beach. A deep moat surrounds it on three sides, though in this case the moat would not have held water. On the fourth side, the hill is steep so no moat was necessary. At the corners of the fortress and halfway along each wall, the crusaders built towers that extended out into the moat. By doing this, they could defend the fortress from anyone who tried to cross the moat to attack or climb the fortress walls.

The entrance gate was heavily fortified, and anyone who made it close enough to the main gate or approached the inner gate would have had arrows raining down on them through the many small arrow slits in the high walls. The entrance path is narrow and hairpin-shaped, which would have limited how many men could enter at a time, especially if they tried to ride horses through the gates.

The history of Belvoir Fortress

All of this attention to defense came in handy during the short period of its use. Belvoir fortress was built by the Knights Hospitaller (just like Akko) in 1168.

They soon needed its defensive walls when Muslim forces under General Saladin attacked the Crusaders starting in 1181. Even when Saladin’s forces had conquered both Jerusalem and Akko, the knights at Belvoir were able to withstand a siege.

The siege ended in 1189, when the Muslims managed to collapse a wall of the fortress so that the knights had to surrender. There wasn’t much point in hanging on any longer anyway, since they were the last crusader holdouts by that time.

Inside the defensive walls, Belvoir had everything the knights stationed there would have needed. I saw the remains of a cistern and bathhouse; a series of high vaulted spaces that would have been stables and storage rooms; the keep, where the soldiers lived and dined; the kitchen, and so on.

While almost all of the fortress is open to the sky today, small informational signs explain what each space was used for, with a small illustration to help you imagine how it looked. Otherwise, the fortress is essentially empty, and I was free to walk around at will.

It was also nearly empty in terms of people, with only one couple exploring nearby.

The location of Belvoir Fortress

Belvoir means “beautiful view,” and it certainly has one. The Knights Hospitallers chose a strategic spot overlooking the Jordan valley about 500 meters below, with three important river crossings in view. From here you can also see the Golan Heights, Mount Herman, the Gilead, Gilboa and Samarian mountains.

I didn’t know any of these names at the time I visited, of course, except the Golan Heights. All I saw was a beautiful, dramatic, windswept view edged with mountains and the Sea of Galilee. In the nearer distance were slopes covered with wildflowers. All I heard, most of the time, was the sound of my steps on the gravel paths. When I stood still, though, I soaked in the silence that wasn’t really silent: the birds and the wind in the brush filled it.

Belvoir Fortress is located straight south of the Sea of Galilee. It’s easy to drive to up a badly-paved road through beautiful rolling hills. As an extra bonus, the path to the main entrance passes by a collection of rather strange statues by Yigal Tumarkin. As far as I can tell, there is no actual relationship between the statues and the fortress.

Is this the kind of historical site that you enjoy visiting? Add a comment below! And if you liked this article, please share it!