When I write about off-the-beaten-path sights, I don’t necessarily mean that they’re hard to get to.

I went to Um el Kanatir in the Golan Heights on the advice of Sara Zafrir, owner of Genghis Khan in the Golan, who insisted it was worth the effort. (Disclosure: I received two free nights in Sara’s hostel in exchange for my post about hostels.) After her recommendation of Susita was such a success, I knew to trust her advice. 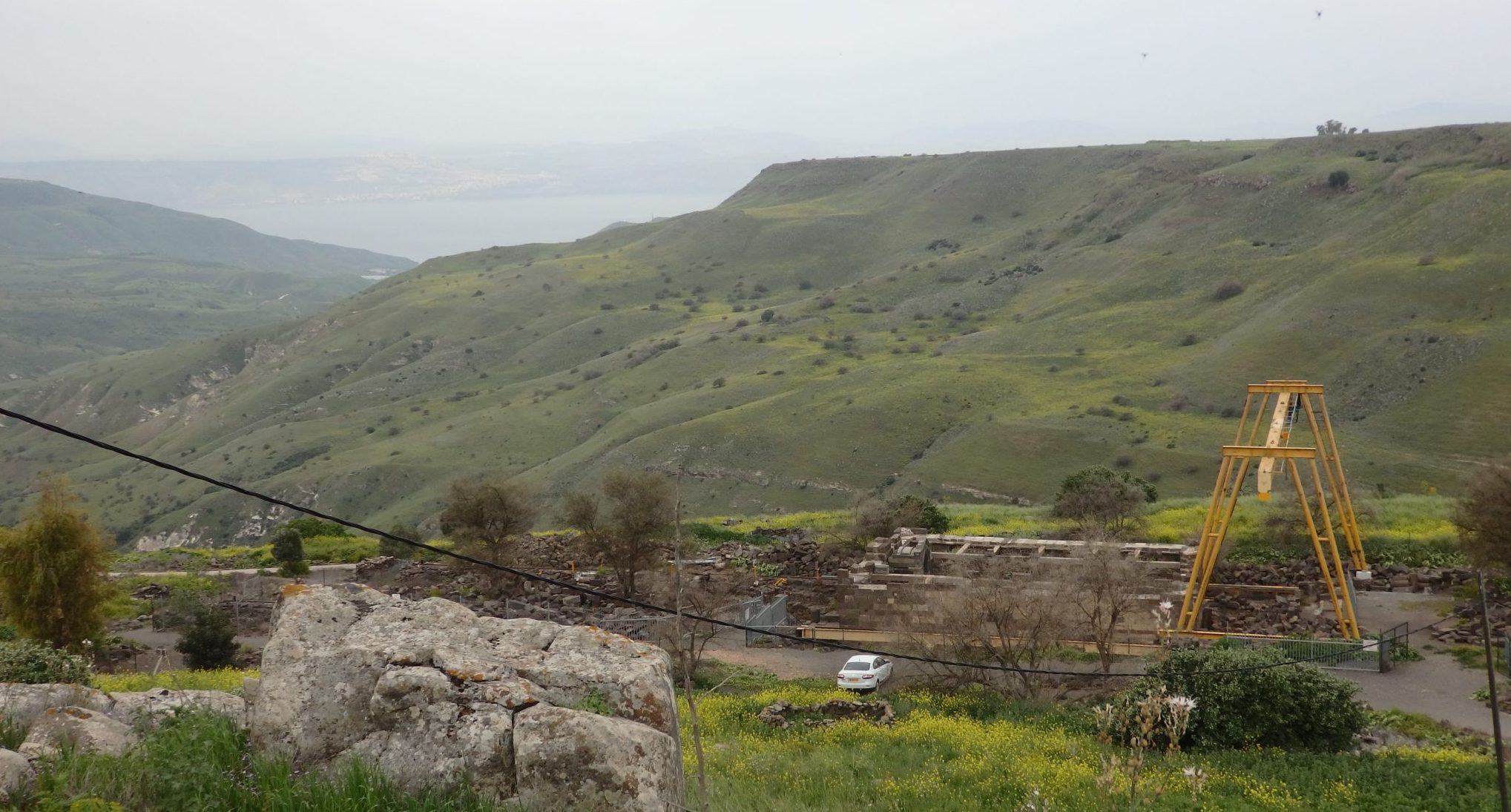 This is the view over the hills of the Golan Heights that opened up once I had descended a short distance down the path from the parking lot. You can see the Sea of Galilee in the haze in the distance. In the foreground is the ruin of the Um el Kanatir synagogue.

Unlike Susita, Um el Kanatir is easy to get to and well-prepared for tourists: a large parking lot, picnic tables, and a neat path down to the ruin.

Yet my car was one of only two in the parking lot. The only people I saw were a couple of workmen taking a break in the shade. As I was leaving, three other visitors arrived.

Until I found the one and only informational sign at the entrance, I wasn’t at all sure I was in the right place. It took me a while to figure out that the unmarked path going down from the parking lot was the route to the ruin.

The walk down was quiet; I only heard the occasional rustle in the undergrowth on either side, birds chirping, and the sound of my own sandaled feet slapping on the path. Wildflowers carpeted everything, and the view that opened up, though a bit hazy, revealed the Sea of Galilee in the distance and the rugged green hills I’d been so enjoying in the Golan Heights.

What I found below is not an extensive ruin. Um el Kanatir (or Umm el Kanatir) was a small Golan Heights village, partly agricultural, but mostly focused on producing flax textiles, using water from a natural spring here. Um el Kanatir means “Mother of Arches” apparently, and one of the original three arches over the spring has survived, as has the spring itself.

The ruin of the synagogue is about 1500 years old, meaning it stems from the Byzantine period. The flax processed here would have supplied cloth to nearby cities like Susita.

Despite its modest size, Um el Kanatir provides an intriguing look at how archaeology can be done. While at Zippori, for example, ruins have been preserved as they are, at Um el Kanatir, a project is underway to reconstruct the synagogue.

This is something I’m generally not a fan of. Too often it seems to me that reconstructions become revisions, and modern sensibilities end up changing how a place looks, rather than allowing us to see how it actually was.

Here, however, archaeologists are using new technologies to reconstruct it precisely. This is possible partly because most of the pieces are still at the site. They have all been catalogued, numbered and digitally tagged: every single fragment. Using a 3-D laser mapping device, archaeologists have been able to figure out where pieces go and how they fit together. 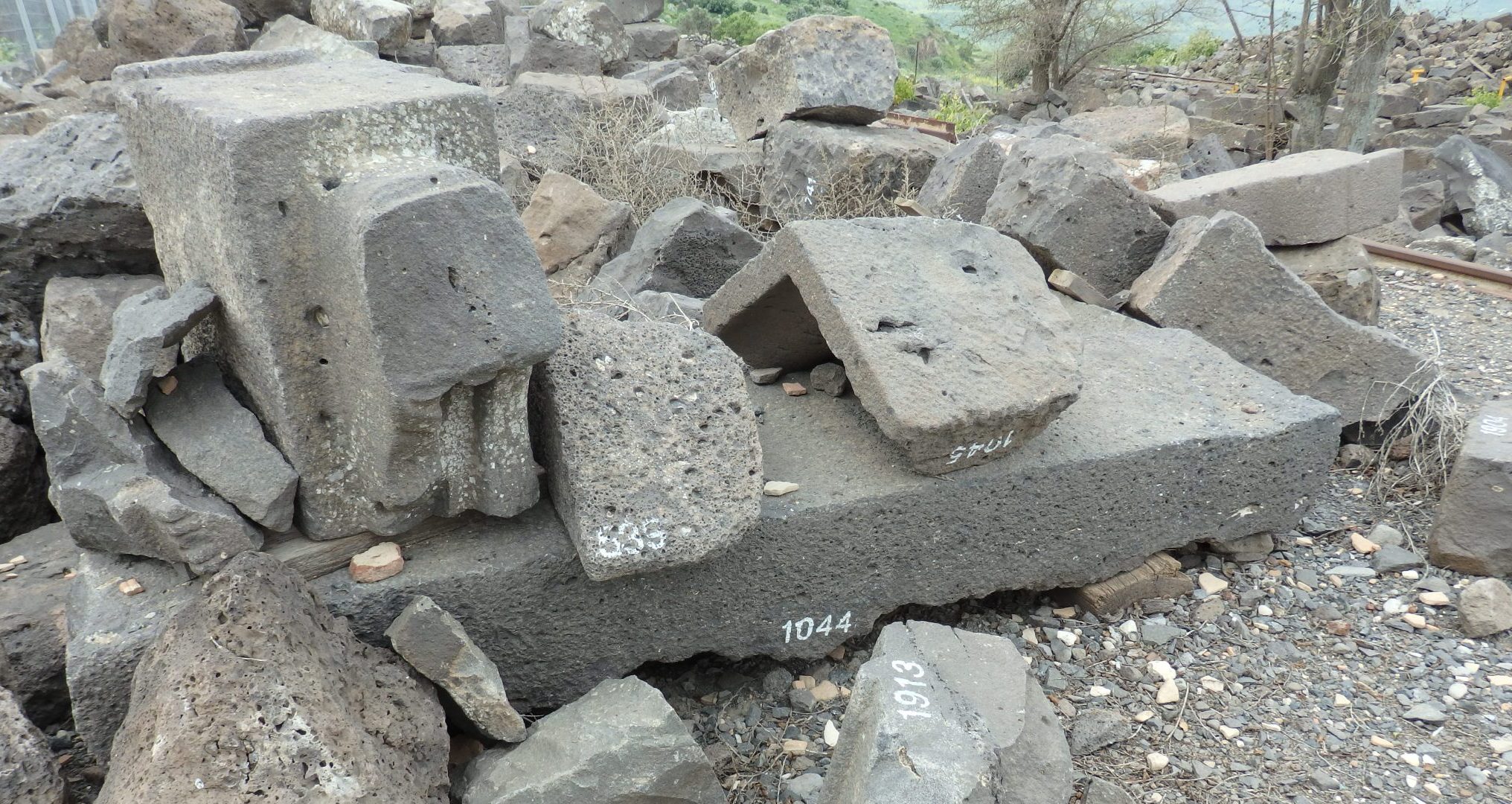 A large horizontal crane stands on two parallel tracks, ready to lift stones and slide over the ruin to place them without damaging the building itself. Up to now, about half of the synagogue has been rebuilt.

The result so far is unusual and moving. Standing in the center, I could visualize the worshippers on the benches around the walls. I could envision the Torah in the ark at the end. Still open to the sky, it had again become, visibly, a synagogue. 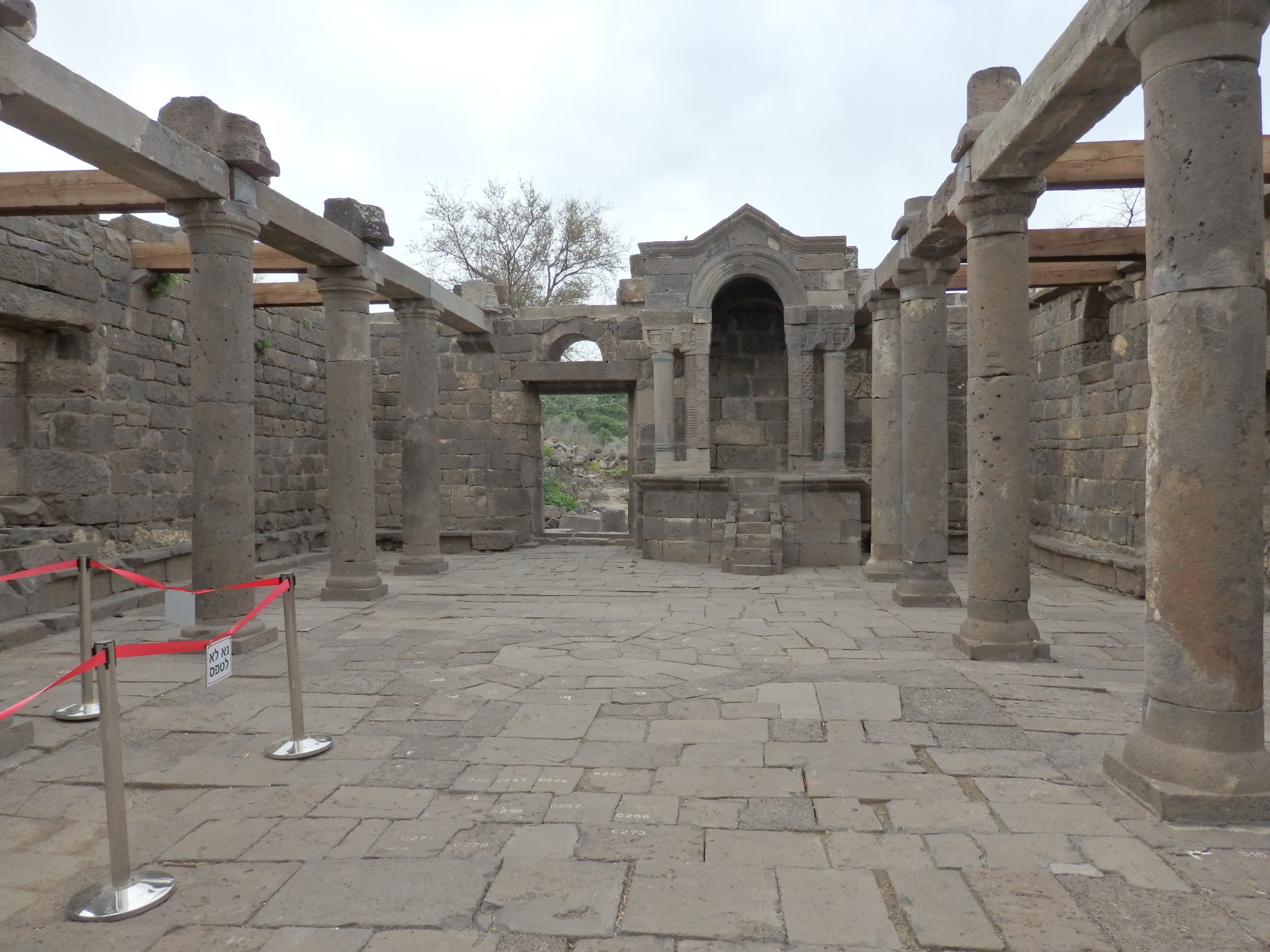 The interior of the synagogue at Um el Kanatir, looking toward the Torah ark.

And it’s an unusual synagogue, as far as I’ve ever seen. For one thing, the main entrance is at one end as usual, but the ark is right next it, where normally it would be at the opposite end. For that reason, the ark itself is off-center. I made a short video of it to give you an idea.

The center of the structure’s floor is paved with flat-cut stones, forming an octagon surrounded by a circle. Standing in the center of that octagon and looking at the Torah ark, I realized that it is slightly off-kilter. From the dead center of the room, people would have been able to see straight into the Torah ark. 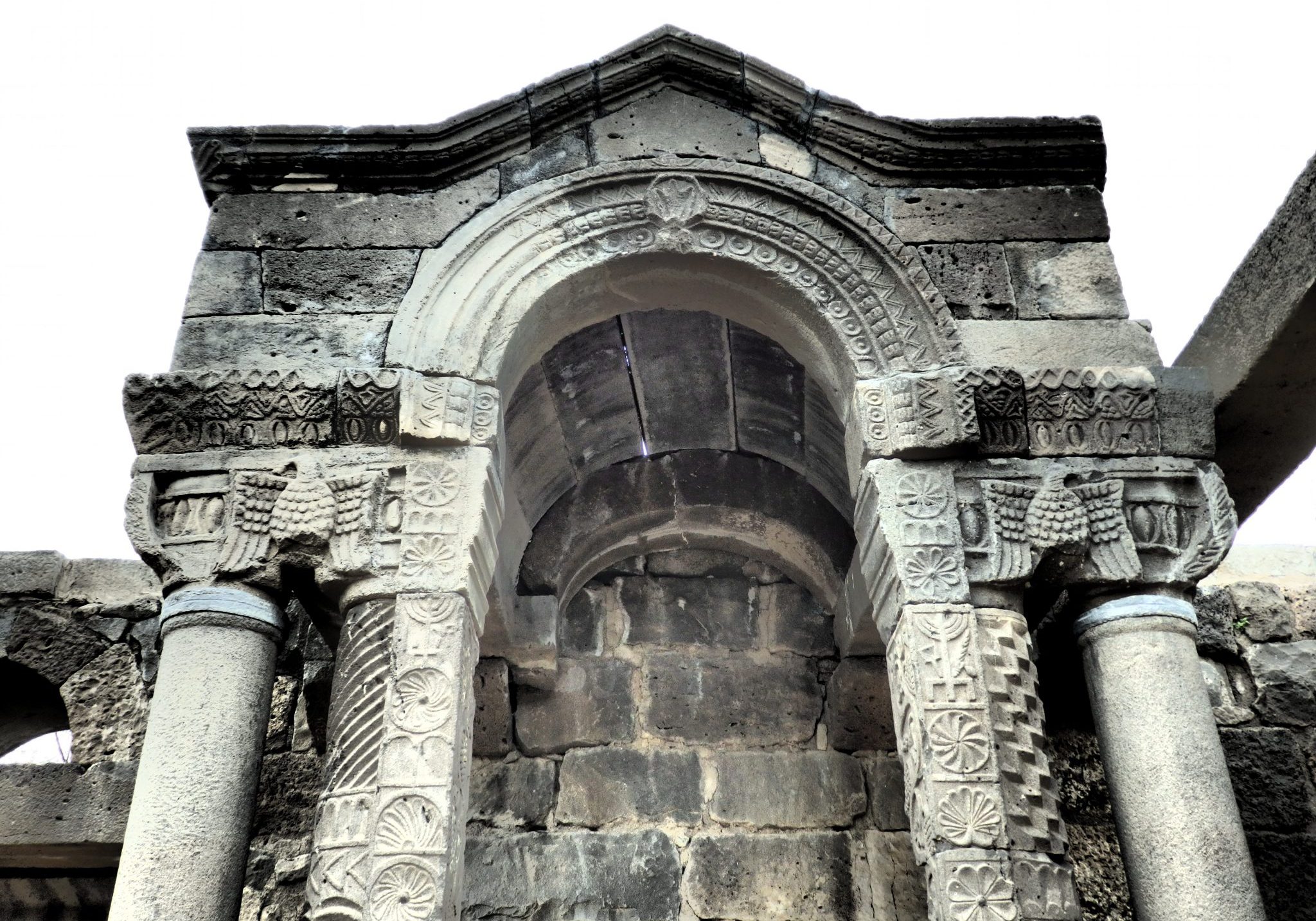 The Torah ark at Um el Kanatir shows detailed carvings. You can see here how the upper interior arches are skewed to the left.

The ark, speaking of which, is highly, if rather primitively, carved. I spotted Jewish symbols like menorahs and shofars, as well as flowers and birds. The back wall of it, by contrast, is plain stones. If it was like Torah arks today, a cabinet built into the back of the ark, probably wooden, would have held the Torah. 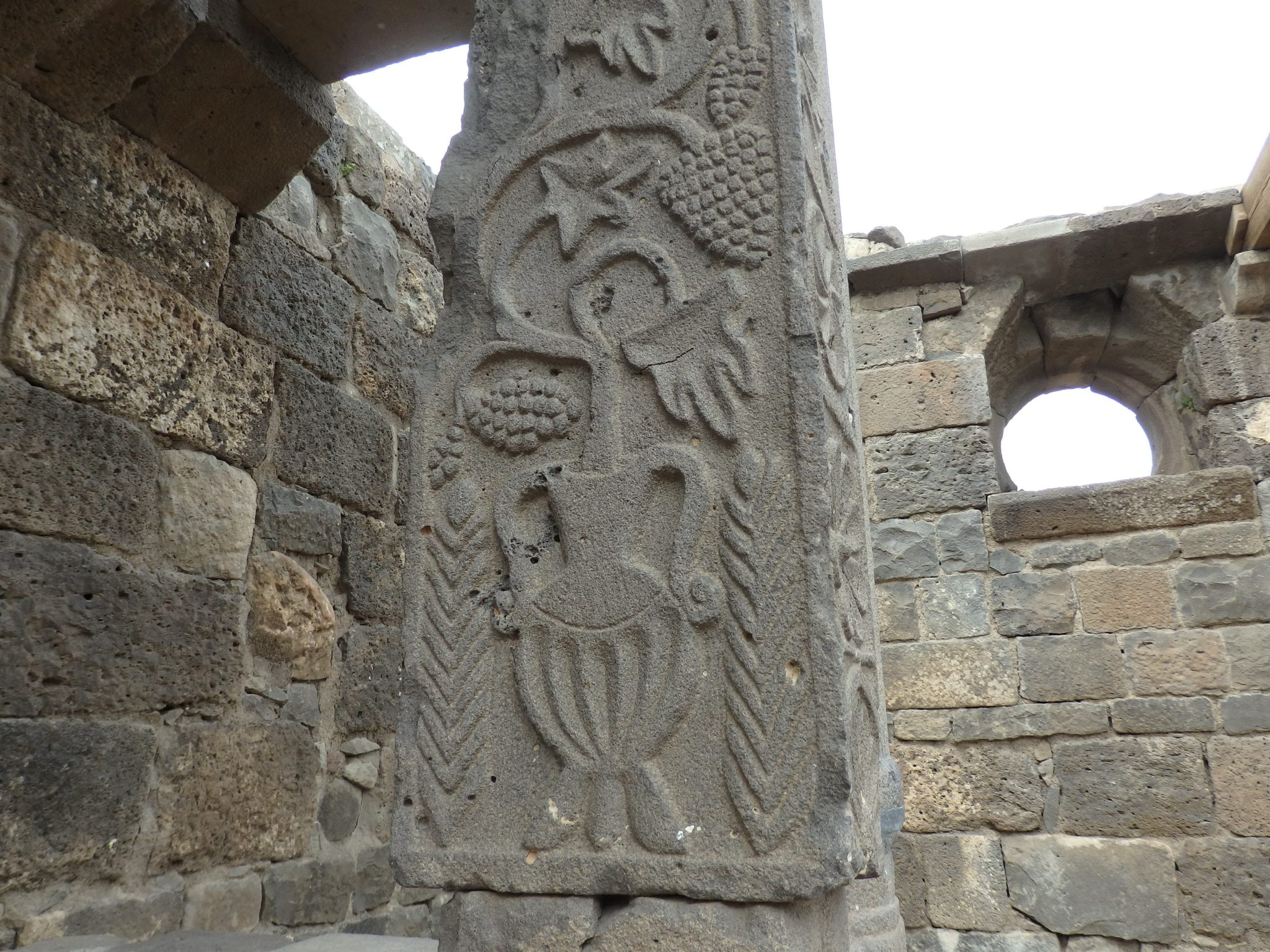 The spring at Um el Kanatir

The ancient spring still feeds into a stone-edged pool, and the arches are also being restored. These structures are distinctly less ornate; clearly much love and effort went into the synagogue, the most important building in this ancient Jewish community.

Two of the arches under reconstruction at Um el Kanatir. The spring is just next to the second one.

Between the synagogue and the arches, the paths take visitors past jumbled ruins that look very simple. These, I presume, are later structures. They seem too crude to have survived the powerful earthquake that destroyed the whole village in 749 CE: the same one that destroyed Susita. 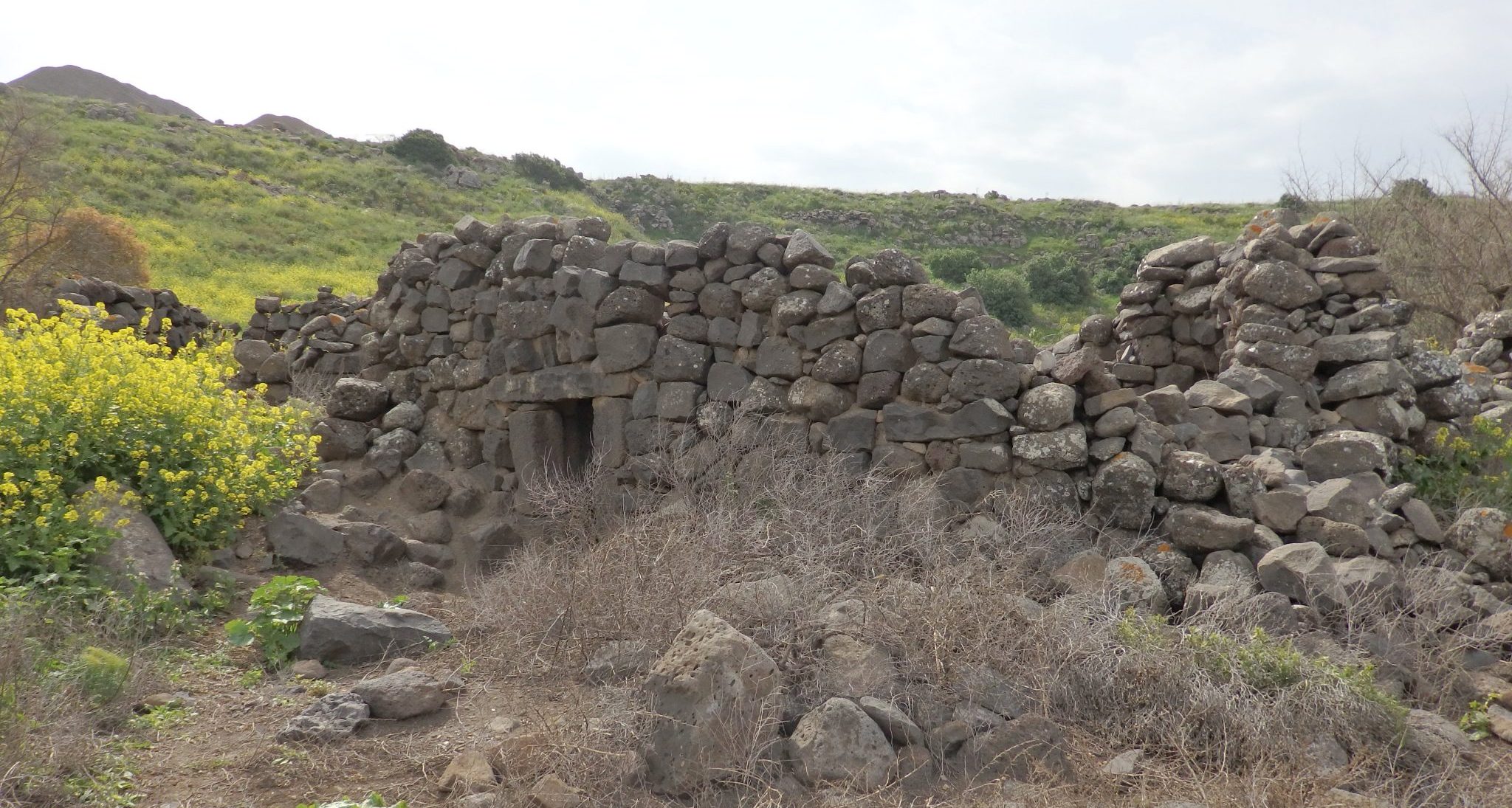 A ruin between the synagogue and the spring at Um el Kanatir.

Um el Kanatir is not hard to get to by car. East of the Sea of Galilee in the lower Golan Heights, it’s just on the edge of Kibbutz Natur. (Don’t trust your GPS; you’ll need to ask someone in the kibbutz to point you in the right direction.) Um el Kanatir won’t take more than about a half hour of your time, and there are plenty of other off-the-beaten-path archeological sites dotting the Golan Heights. Exploring them would make a great road trip. 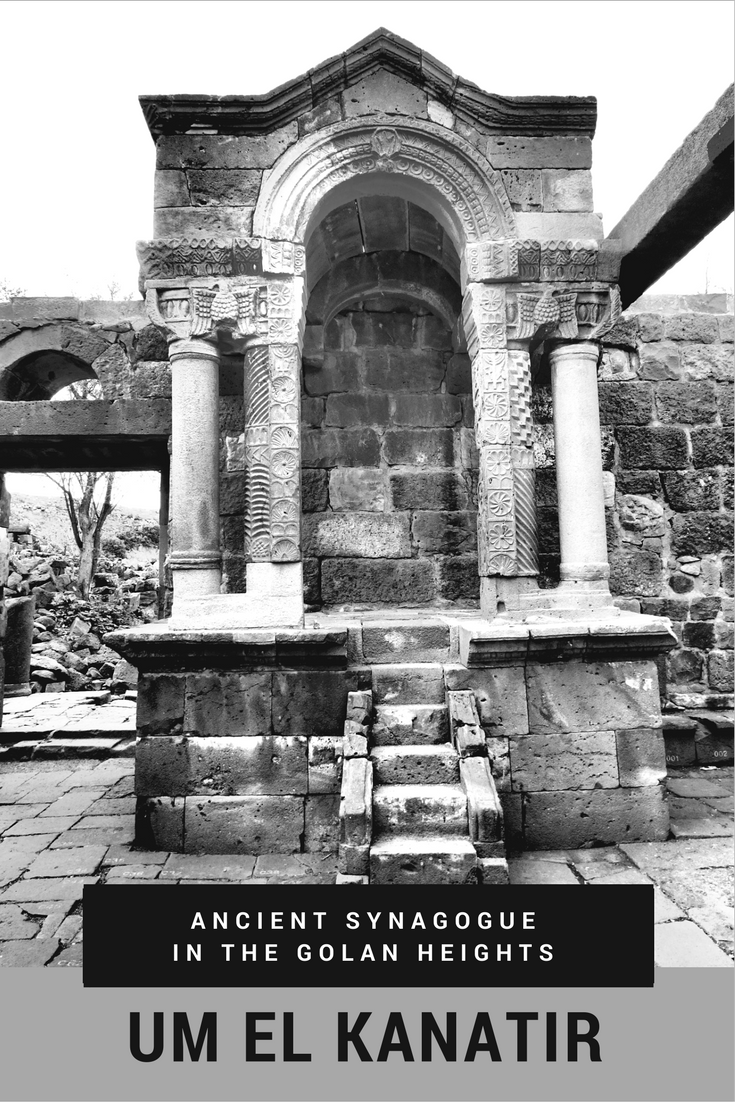