I haven’t stayed in a hostel in years. In a post I wrote back in 2007, I blamed it on the shared shower, and described how awful they can be.

It’s not just that, though. As I get older, I have more trouble sleeping. I wake up easily, and then I’m grumpy the next day from lack of sleep.

The idea of sleeping in a dormitory sounds to me like a nightmare: over-excited backpackers, barely out of their teens. Lots of drinking and partying. I’ve heard plenty of stories about couples having sex in dorm rooms, despite the fact that other people are there and trying to sleep! No, thank you!

When I signed up to attend the TBEX conference in Jerusalem last month, I also joined a Facebook group of bloggers attending the conference.

One day, a man named Ori Gonen posted a message there. He said he represented a network of hostels in Israel called ILH. If anyone was going to travel before or after the conference, we should contact him about staying in one of them.

I sent him an e-mail that must have seemed quite odd to him. Pointing out that I’m an older travel blogger, I explained that I just can’t sleep in a dormitory full of drunken kids anymore. I added that I had looked at his association’s website, and it looked like many of the members of the ILH network aren’t actually hostels in the traditional sense. Could he find me something that involved having a private room?

It was worth a try, I figured, but I didn’t expect an enthusiastic response. Or really any response, to be honest.

I was wrong. Ori ended up getting me two two-night stays in two different accommodations in the north of Israel.

Set in a beautiful rural area between the Sea of Galilee and the Mediterranean coast, my room at Kibbutz Inbar Country Lodging surprised me. I expected a hostel, but got a hotel room.

Because of my more-or-less demand for a private room, I stayed in a large room with a double bed, a single bed, and two chairs that could open out to flat beds for children. This room could easily hold a whole family. 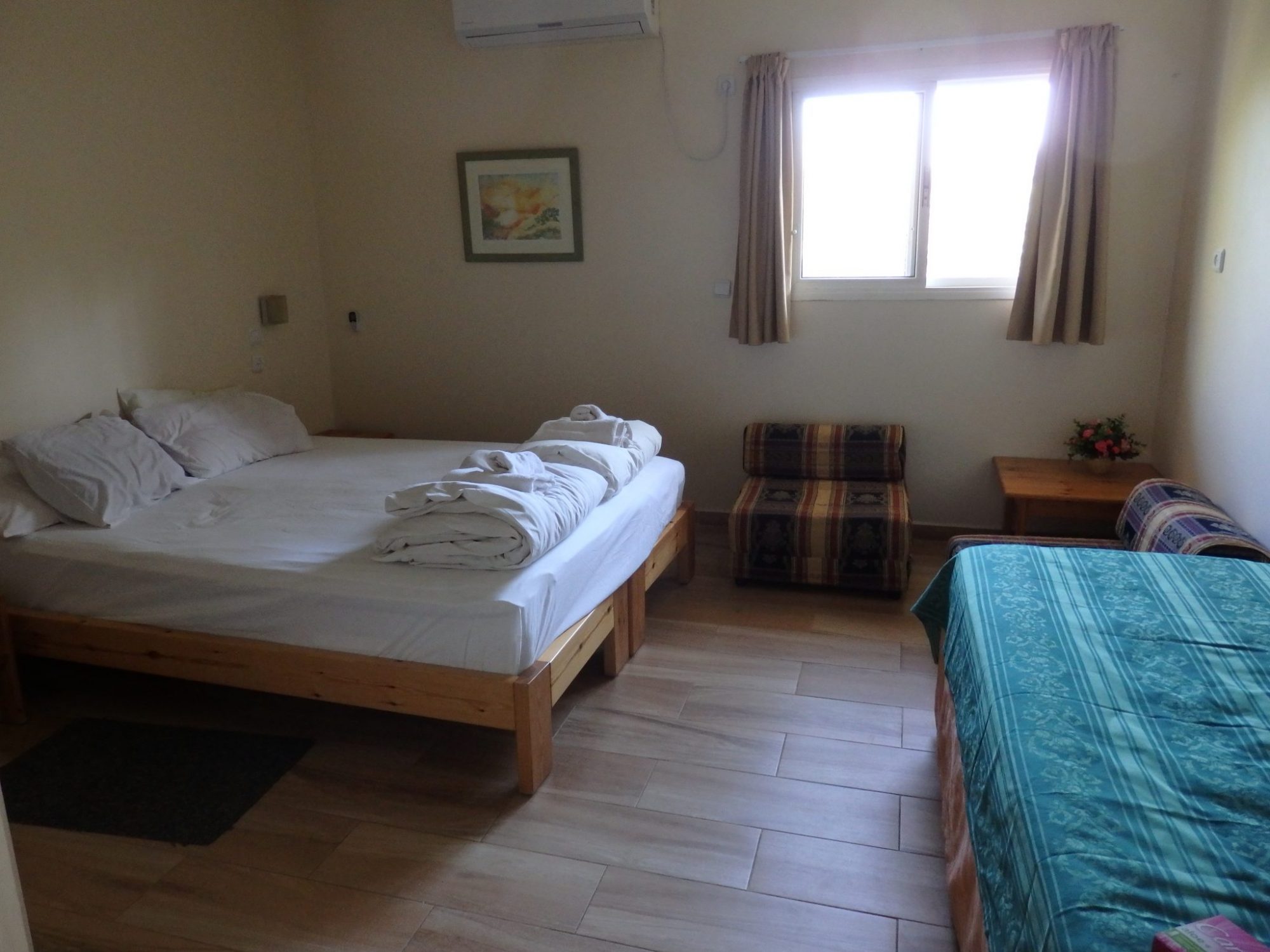 My room at Kibbutz Inbar, one of the ILH hostels in Israel

While it was a very basic room with no frills, it was clean and had everything I wanted. I didn’t need the air-conditioning, but in the summer it would certainly come in handy. The reading lights on both sides of the double bed were something I don’t always find in three or four-star hotels. The bed was very comfortable and the bedding was good quality. I was also provided with towels.

I had a bathroom to myself, which was not something I had asked for, but I was glad to have it. It had liquid soap in a dispenser by the sink and in the shower, but no other amenities, though I didn’t really expect any. The room also included an electric kettle and the makings for tea and instant coffee.

Outside the door stood my own microwave and fridge. If I had wanted to cook a meal, it would have meant a short walk to a shared kitchen, which looked fine, though I didn’t use it. In any case, renting a room here includes a buffet breakfast. The room faced an open garden area, where tables and hammocks are available to the guests. 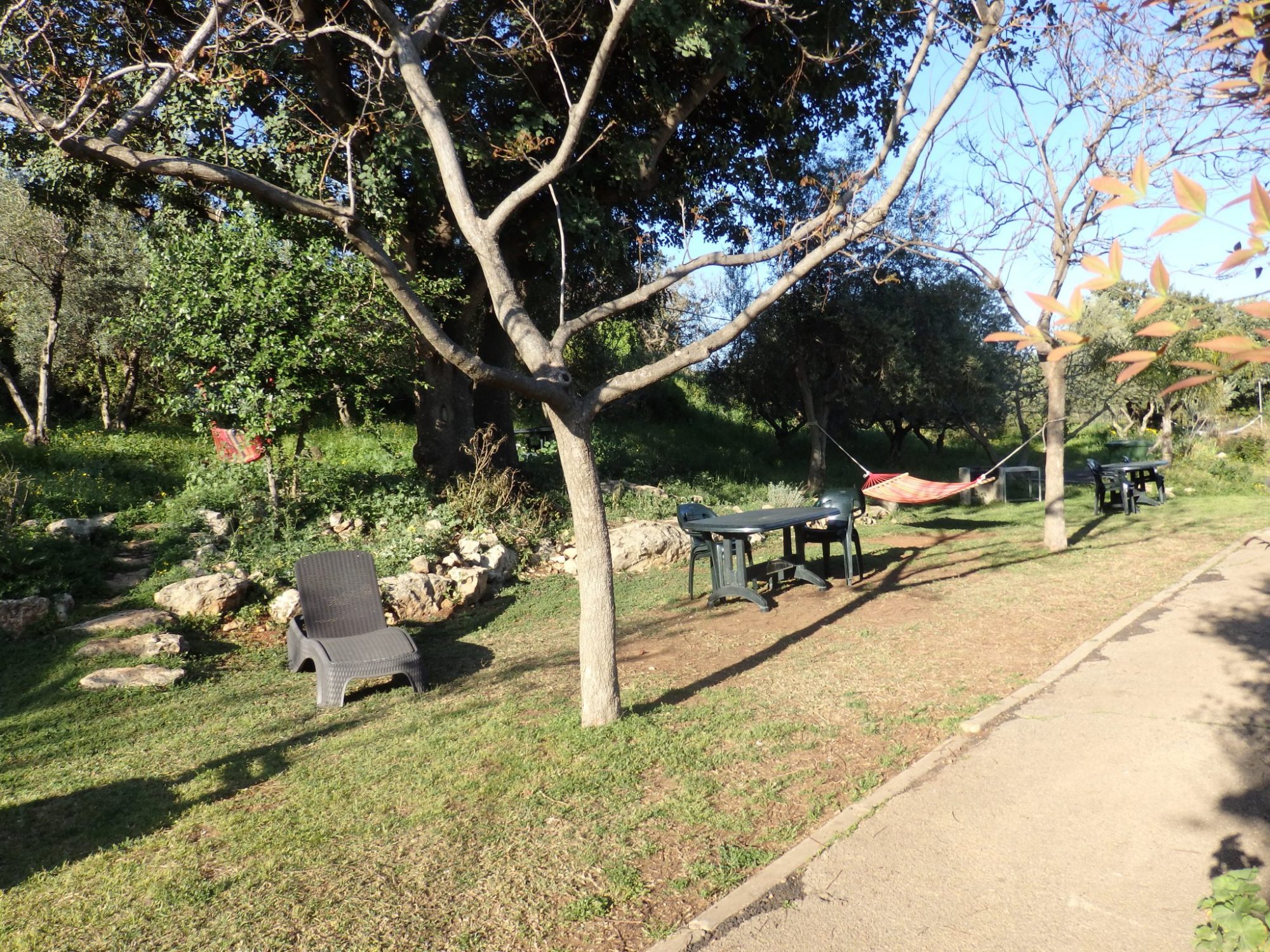 The area outside my row of rooms at Kibbutz Inbar.

It was also remarkably quiet at Kibbutz Inbar. Founded in the 1990s, the kibbutz is made up of five families. They renovated the buildings, which had been abandoned, to create the guesthouse. Besides the accommodations, they run workshops about yoga, healing, and other such new age topics.

Kibbutz Inbar also has the typical dormitory rooms of the traditional hostel. However, the number of drunken backpackers it takes in must be severely limited by the place’s location. You pretty much would have to have a rental car to get here. A student group would be a more likely population, arriving together in a tour bus. Or a tour group arriving to take part in a workshop.

With my rental car, it was still about a 45 minute drive to the historic city of Akko on the coast. It is about an hour away from Nazareth and Tzippori. For me, the location was perfect.

In any case, I didn’t have to share a shower, nor did I see or hear a single drunken backpacker.

Genghis Khan in the Golan

The second “hostel” I stayed at was much more unusual. Here is a sentence I could never imagine I’d say: I stayed in a Mongolian yurt in the Golan Heights. 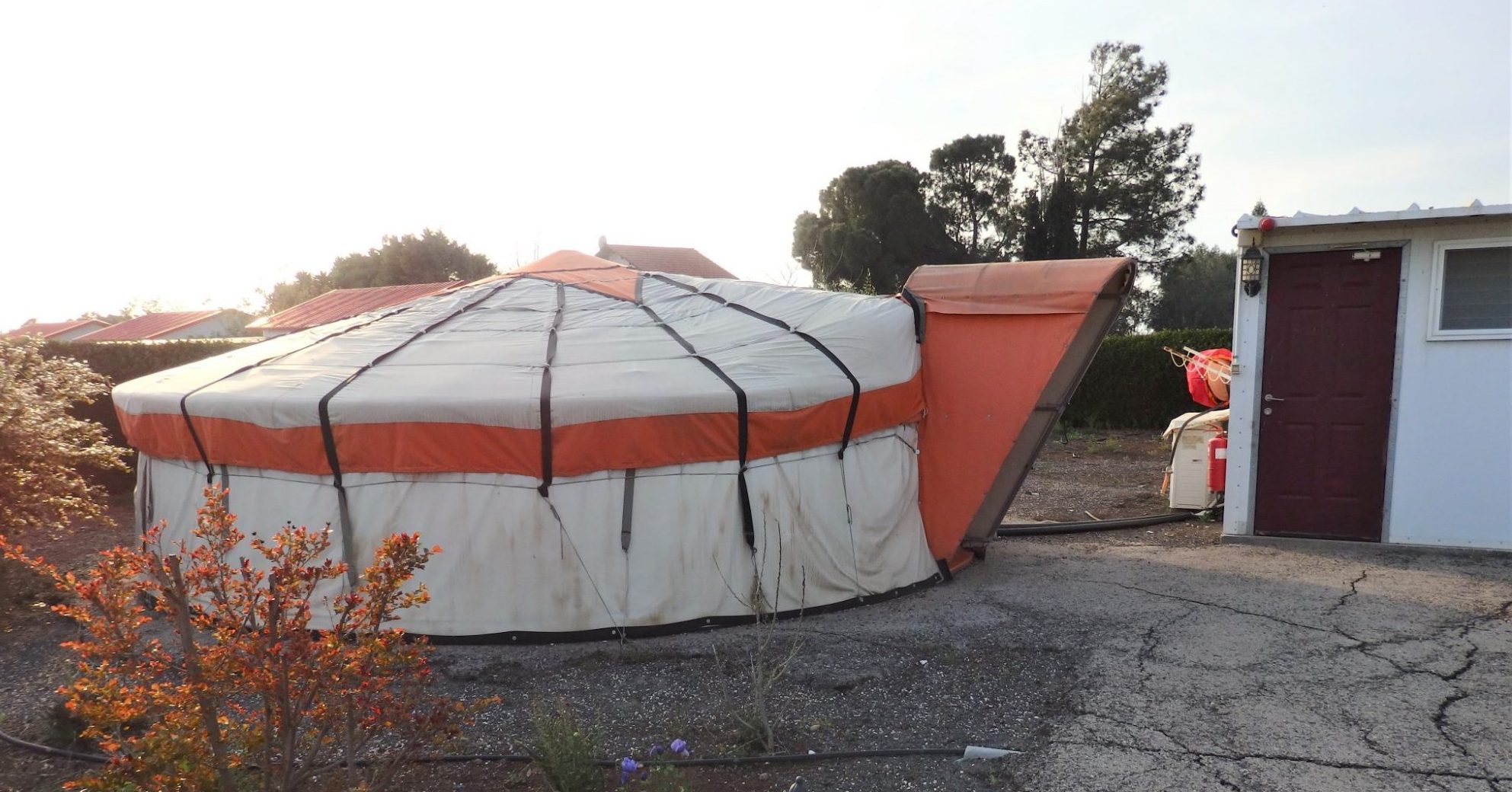 “My” yurt at Genghis Khan in the Golan. The small building to the right was “my” bathroom.

Genghis Khan in the Golan is located on a moshav (a cooperative community of landowners) called Giv’at Yoav in the southern Golan Heights. The moshav was established after Israel annexed the Golan Heights in the Six-Day War of 1967.

Sara Zafrir and her husband ran a dairy farm on the moshav. One day, they saw a reality TV show about a family who stayed in a yurt in Mongolia. Inspired by the yurt, Sara decided to build one, and set it up near their house on the farm.

Sleeping in a Yurt

Later, she rented a separate piece of land and, with help from her husband, she built more yurts, founding Genghis Khan in the Golan. When I say she built them, I mean that she sewed the cloth that makes up the walls and ceiling. Her husband helped level the land, build the wooden floors and wooden frameworks for the yurts, which are, essentially, permanent, round tents.

The result is five yurts, one of which can house six people while the others can house eight people each. Each yurt has a separate full bathroom next door.

Because of my demand for a private room – and fortunately March is the low season – I ended up sleeping in one of the larger yurts by myself. 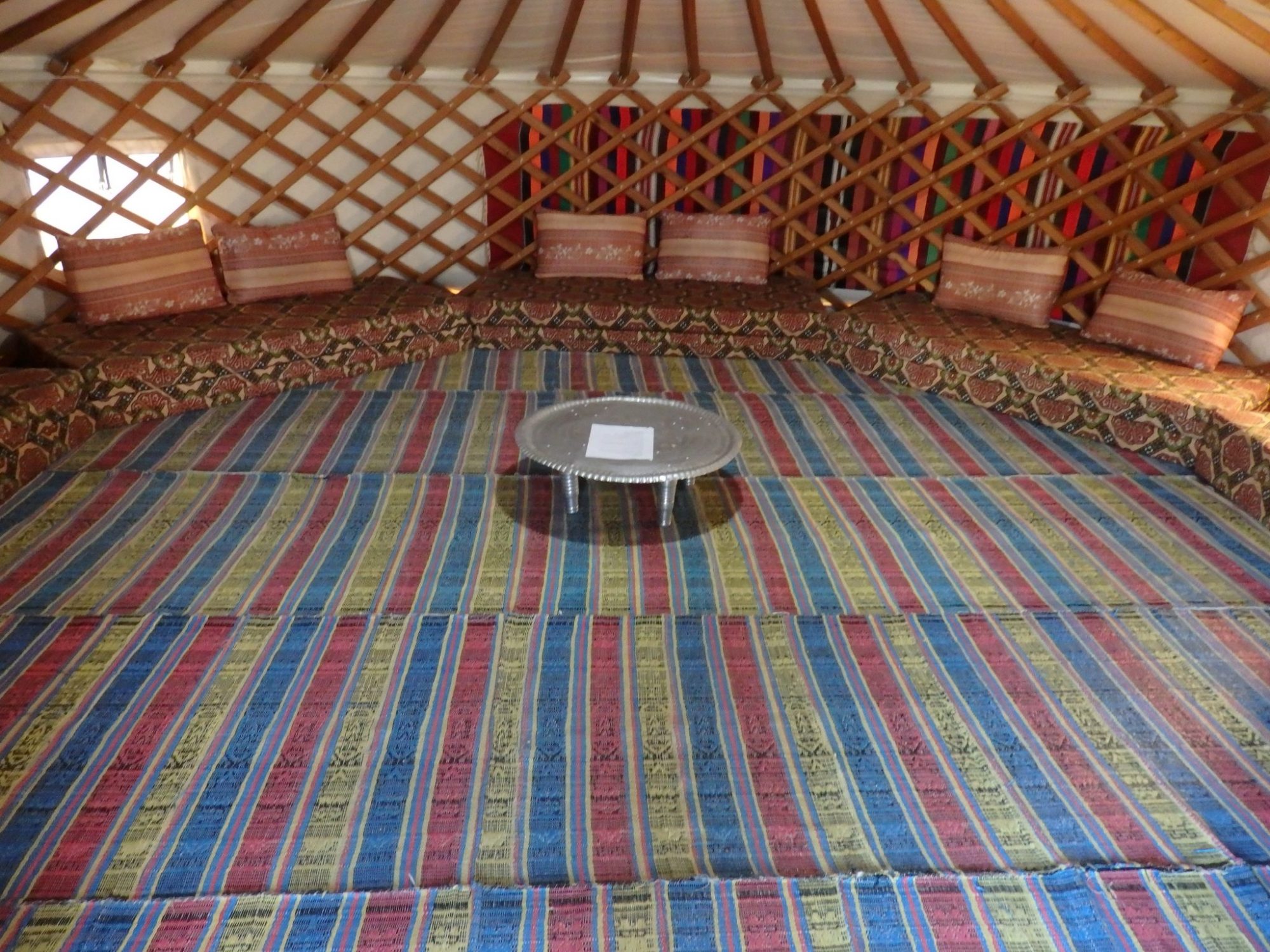 I have to say it was a bit strange, and I didn’t feel as comfortable as I had at Kibbutz Inbar. It was clean, and the mattress I slept on was comfortable. There were some practical details that would have been less of a problem in the heat of the summer.

For one, it was cold out. The yurt had a heater, though I couldn’t control it from the bed, so I had to get up to turn it on and off. That wasn’t much of a problem, but going to the bathroom involved going outside. I just didn’t want to leave the warmth of bed.

Another detail that mattered to me was the lack of a bedside lamp. I had to get out of bed to turn the one overhead light on or off.

On the other hand, like Kibbutz Inbar, Genghis Khan in the Golan would be a great place to stay with a family. The kids would have plenty of room to run around, both inside the yurt, where the whole middle space is empty, and outside on the well-groomed grounds.

Sara, the owner, is brimming with information and advice on what to see in the area, and I never would have seen one of the highlights of my trip, called Susita, if it hadn’t been for her enthusiastic recommendation.

Like Kibbutz Inbar, Genghis Khan in the Golan would be an unlikely place for drunken young backpackers to congregate because, again, you’d need a car to get there easily. And assuming you have a car, plenty of interesting sights are within easy reach.

The Golan in general is beautiful, especially when I was there, in the spring: rolling hills, covered with wildflowers, dotted with ruins from a range of historical periods, especially Roman ruins. 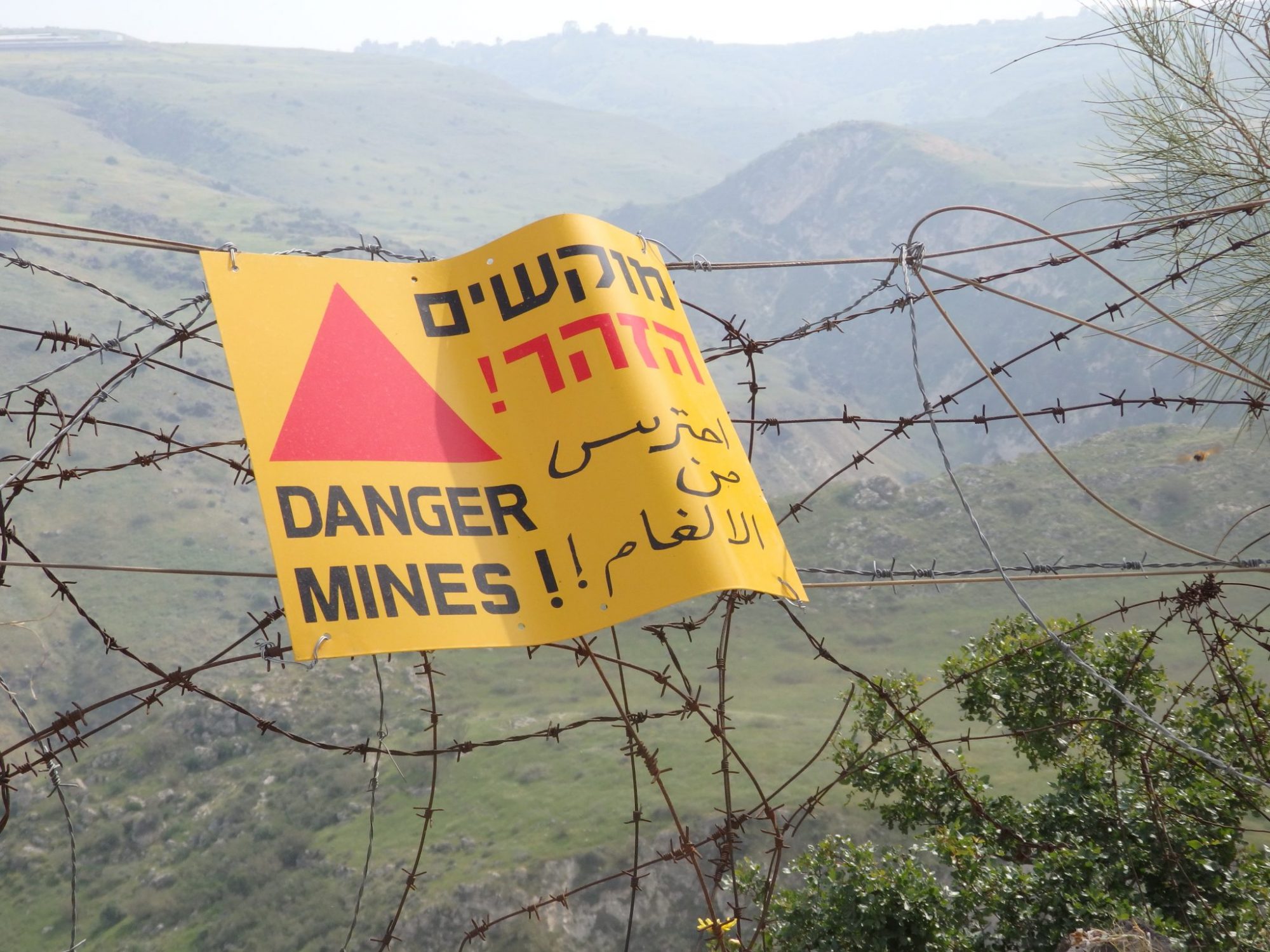 Besides beautiful scenery, in the Golan you’ll see many indications that a war happened here not too long ago.

Should you stay in a hostel?

I have had to readjust my view of what hostels are. The dividing line between hostel (dormitories full of bunk beds) and hotel (private room for a family or group) is getting less clear-cut. Many hostels used to only charge per bed, so a private room was prohibitively expensive for a family of four. Now many charge per room for family rooms or you can book just a dormitory bed.

The biggest selling point of a hostel, of course, is the price. For a family it could very well turn out cheaper than a hotel.

Hostels often have more shared space than a hotel, or, rather, more socially shared space. A hotel might have a massive lobby with wonderful comfortable sofas, but the other guests would certainly not appreciate any attempt to start a conversation with them. And I doubt they’d accept your kids running around and making noise.

Hostels are more social, if only because the guests share cooking and eating space.

I still prefer the comfort and privacy of a hotel room. Nevertheless, for a road trip like this one, these hostels in Israel worked well. Because the locations were both off the beaten track, they were quiet and suited me as a solo road tripper. For a backpacker without a car, they’d be difficult at best.

ILH Israel Hostels has over 30 member hostels. Some, judging by the pictures, are in good city locations, but might fit my vision of dorm rooms and drunken 20-somethings. Others, though, are remote, and much more suited to the older independent traveler like me.

Would I stay in a hostel again? Yes, but I’d choose carefully in terms of location and room type.

Have you ever stayed in a hostel? What did you think?