Strictly speaking, this post could apply to most of our summer vacations, not just to this trip to Australia. It’s about the shower in hostels and campgrounds, the sort that you share with lots of other people.

This came up when we visited Kakadu National Park. I couldn’t find a plain hotel room for us: the only ones left were exorbitantly expensive. Instead I booked a hostel room for four, or what this particular “resort” called “budget hotel rooms.” These were a set of three containers, like the ones carried on the back of a truck. Each had been cut into a series of square rooms, with a door on one side and a window on the other, and nothing inside but the bed.

Anyway, these “budget rooms” were next to a fairly large campground and we were expected to use the campground’s toilet and shared shower facilities.

This is the number one reason why I hate camping and hostels. With a decent mattress and a decent tent, camping is fine, and these “budget rooms” provided adequate shelter and quite comfortable beds. But I HATE the shared shower!

Here’s the usual layout: the shower stall is divided into two approximately equal squares, perhaps 3/4 of a meter by 3/4 of a meter each. The first one you walk into may have a hook or two on the wall to hang clothes, and it may have a small shelf or stool to put your clothing on. This square’s floor is invariably wet and muddy, since the previous occupant came in with dirt on her shoes and then dripped water everywhere when she came out of the shower.

There may or may not be a curtain between the two squares. If there isn’t, your clothes will inevitably get wet when you shower, whether you hang them up or put them on the shelf. If there is a curtain, it hasn’t been cleaned properly in a long time and is covered, most thickly at the bottom end, with mold. You will have to do your utmost to avoid touching it in any way, which will be a challenge in itself.

The inner square is the shower itself. Often these are fine, though the level of cleanliness varies depending on how long it’s been since the last cleaning.  Sometimes there’s only one tap so you can’t adjust the water temperature, and sometimes there’s a button tap so you have to push the button to turn on the water again about once a minute. (The shared shower we used in Melbourne was circa about 1955, which would seem charmingly retro if it didn’t look like it hadn’t been repainted or even properly scrubbed since then. I went four days without a shower in Melbourne.) 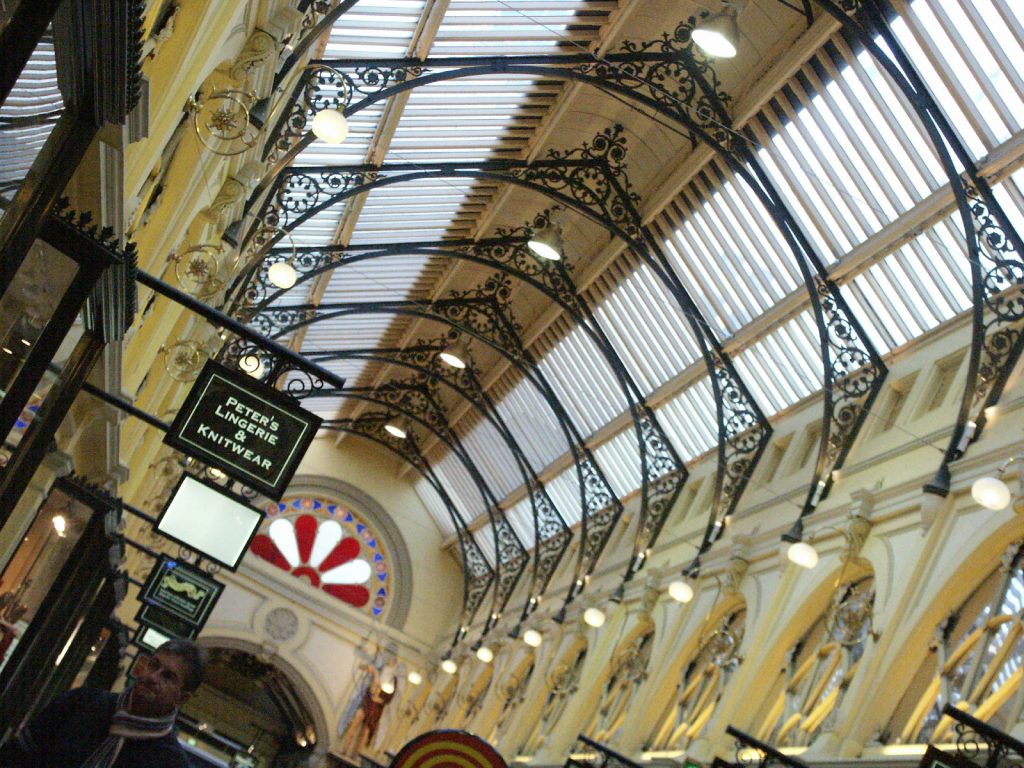 On the other hand, Melbourne is a great city! photo copyright Anne Hellersmith

The biggest problem, though, is after you’ve had your shower. Remember when you’re done in the inner square, you have to dry yourself off and get dressed within one or the other part of the shower stall. It’s wet all over. So are you. You don’t want to touch the walls any more than you have to either with your body or your towel, you certainly don’t want to touch the shower curtain if there is one, and you want to keep your flip-flops on the entire time to avoid catching athlete’s foot.

You grab the towel you hung up, which is hopefully still mostly dry. You dry your upper half easily enough, and your legs too, though it’s hopeless to dry your feet, since you’ll just have to put them down again. Here’s the tricky part: have you ever tried to put on a pair of pants without letting them touch the ground? Try it sometime. Really, try it! It’s nearly impossible. You’ll end up leaning against a wall or piece of furniture to do it, but remember, in this shower stall, that’s something you want to avoid; who knows what’s growing there! Not only that, your feet are still wet. How can you dry your feet and put on your pants (so the pants don’t get wet from your feet) without putting your feet down again and getting them wet or muddy again? Well nigh on impossible!

What usually happens, besides a lot of cursing, is a) my pants get wet, and I end up going back to the room or tent and changing again or b) my feet and pants get muddy and I end up changing again. And I always end up with athlete’s foot and usually swear never to use a shared shower again.