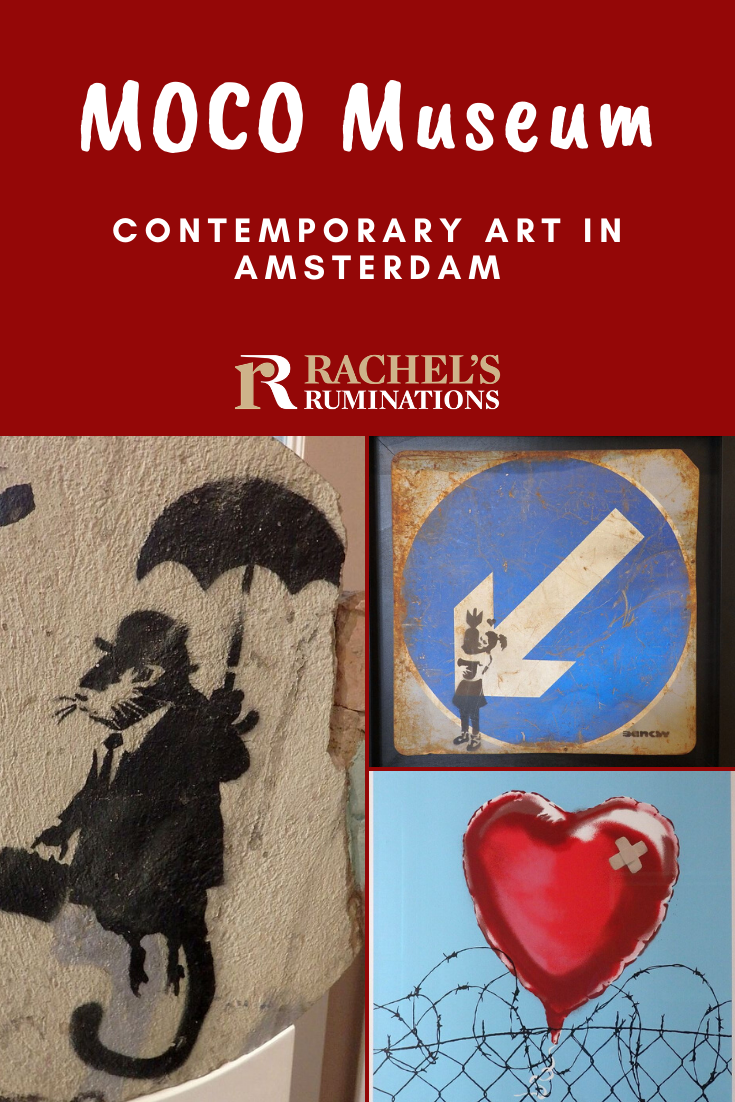 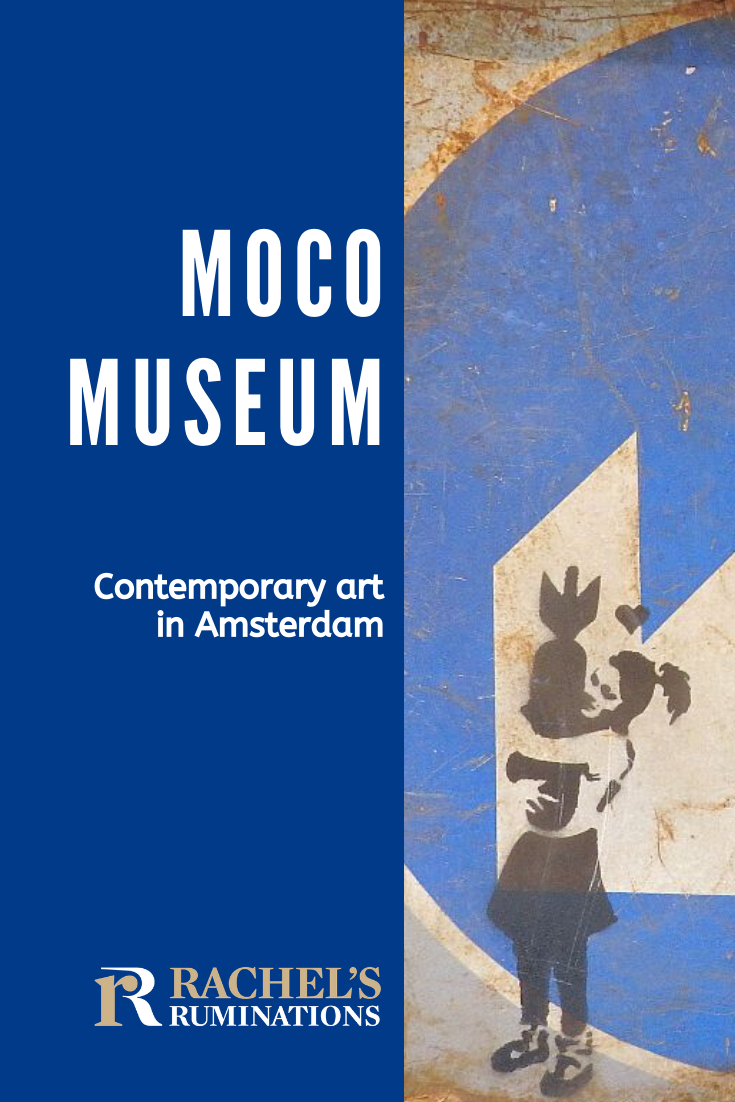 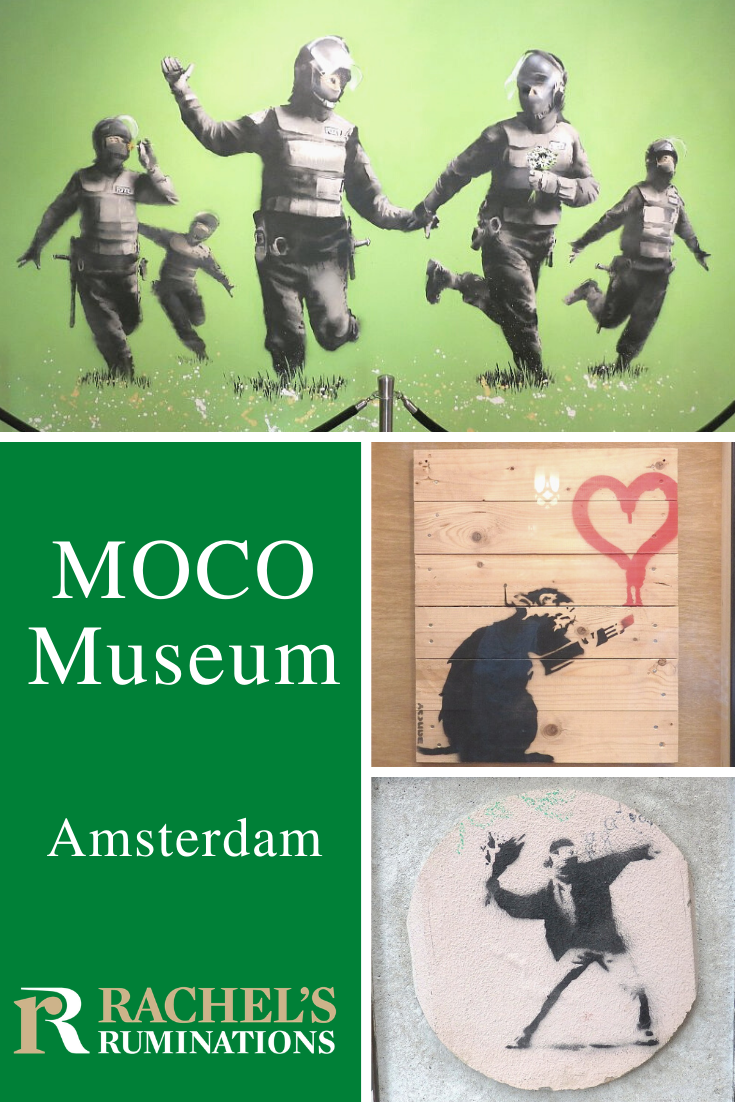 Banksy and Dalí on show in one museum? When I heard that, I was definitely up for a day trip to Amsterdam to visit the new Moco Museum.

Moco stands for Modern Contemporary Museum and, like the much better-known Rijksmuseum and Van Gogh museum, it is located on the Museumplein in Amsterdam. The museum inhabits a former private home, then school, then law office, built in 1904.

Created by gallery owners Lionel and Kim Logchies, Moco is a private museum. As far as I can tell, it has no collection of its own. Instead, the owners will borrow the artworks for exhibits using the contacts they’ve built up as gallery owners.

When I visited, the Moco Museum had two exhibitions going on: one showing works by the famous graffiti artist, Banksy, and one with works by surrealist Salvador Dalí.

Added March 16, 2020: The Banksy exhibit has been extended. The other exhibits at the moment are Studio Irma and JR Room, plus a permanent exhibit of a mix of artists.

The Banksy exhibition “Laugh Now” is contradictory by nature. After all, while Banksy has done traditional works of art for hanging inside on a wall, his fame comes from his powerful, often political, graffiti. By definition, graffiti appears on outside walls, on buildings and bridges: public spaces. (Banksy, by the way, is a pseudonym. As a graffiti artist, he guards his anonymity.)

So how can you exhibit it indoors? Some of the works seem to have been physically cut from a wall, judging by the thickness of the surface. Others were originally painted onto, for example, wooden doors, so they could simply be removed.

While many of these works still send the same political message – a child hugging a missile, for instance, or monkeys wearing sandwich boards – this context diminishes their effect. Political street art is meant to be a subversive surprise: something that you might not initially notice as you walk down the street, but that has an impact once you do. It’s also something that everyone can see, without the barrier of an entrance fee.

Nevertheless, the Moco Museum’s collection is intriguing. Many of Banksy’s familiar motifs are here: the child releasing a heart-shaped balloon, for example, and various images of his “love rat.” And they’re here in multiple iterations, which led me as a viewer to wonder at the differences between the images. Below are a number of the rat images from the exhibition:

I recognized his image of a street protester, face hidden by a kerchief, throwing a bunch of flowers instead of a rock. A slightly different version of it hangs in the lobby of the Walled-Off Hotel (also generally known as the Banksy Hotel), which I visited recently in Bethlehem in the West Bank. The rat images were familiar too, but not in so many poses. In the slideshow below, you can see a sampling of other Banksy works on show at the Moco Museum.

If you like Banksy’s work, check out Artsy’s page on the artist.

Get skip-the-line tickets to the Moco Museum by clicking here .

Salvador Dalí at the Moco Museum

It was a brilliant idea to pair Banksy with Dalí. Both create confrontational, challenging art, even if the messages themselves are different. Certainly Banksy’s art is surrealistic, even though Dalí is far more often associated with surrealism.

However, since I visited the Dalí Theatre-Museum in Figueres, Spain, just last summer, the exhibition at the Moco Museum seemed meager in comparison. The space devoted to Dalí was considerably less than the Banksy section: almost an afterthought.

Perhaps because the space was smaller, for example, one of Dalí’s famous sofas in the shape of Mae West’s lips stood in a small room. Behind it on the wall were pictures representing the rest of her face. At the museum in Spain, a version of the same work fills most of a room and all the parts except the eyes are three-dimensional. The image on the left below is the one in the Moco Museum in Amsterdam; the one on the right is in the Dali Theatre-Museum in Figueres.

Nevertheless, the collection includes the iconic melted watches in a form I hadn’t seen before: sculpture rather than painting. The melted watch motif, along with others like his elephant with stick legs (a statue of which greets visitors just inside the entrance), and references to his wife, Gala, are all key parts of his work, and this show includes examples of each.