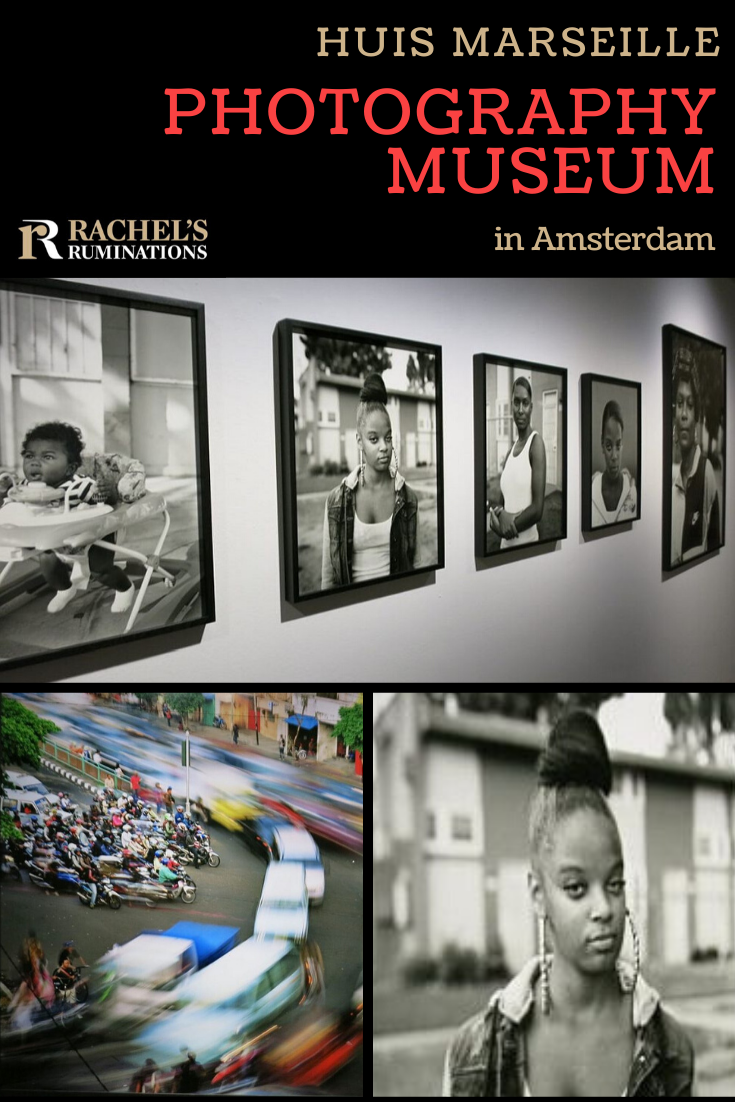 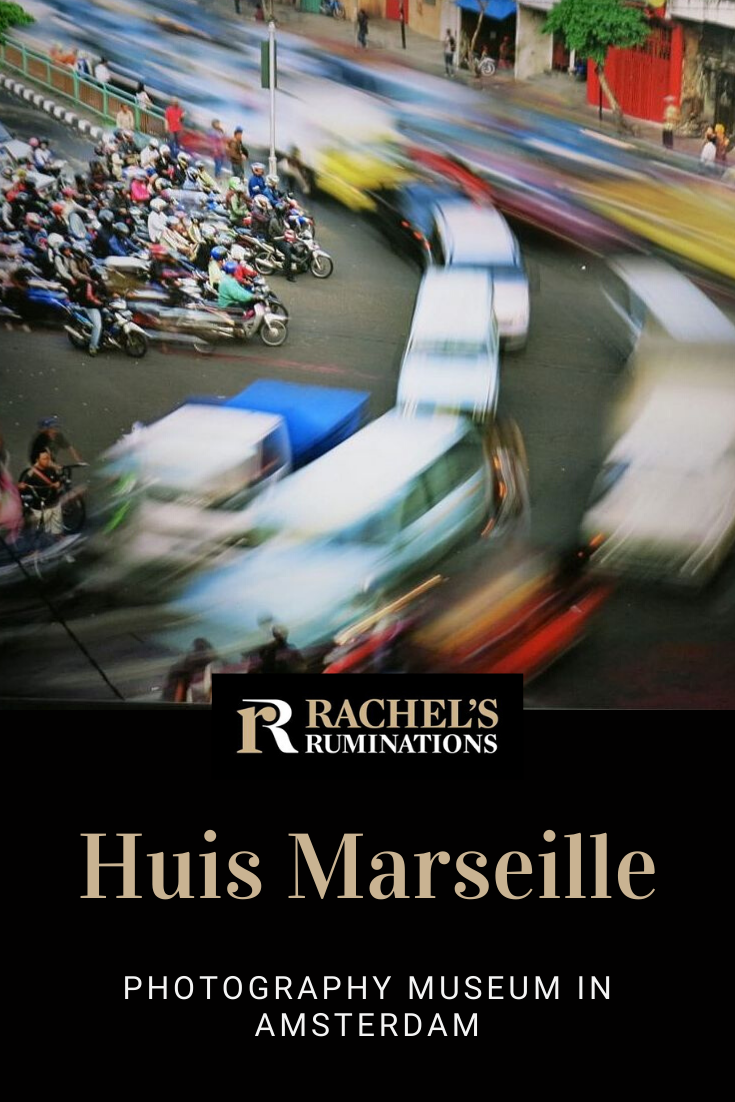 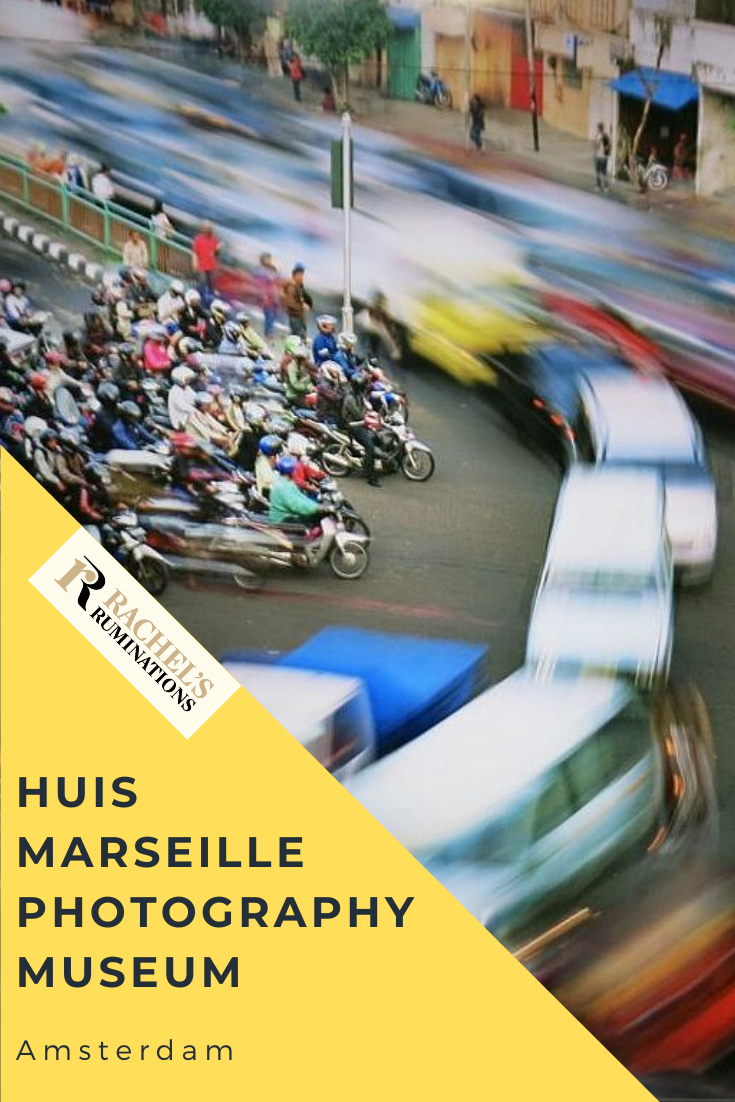 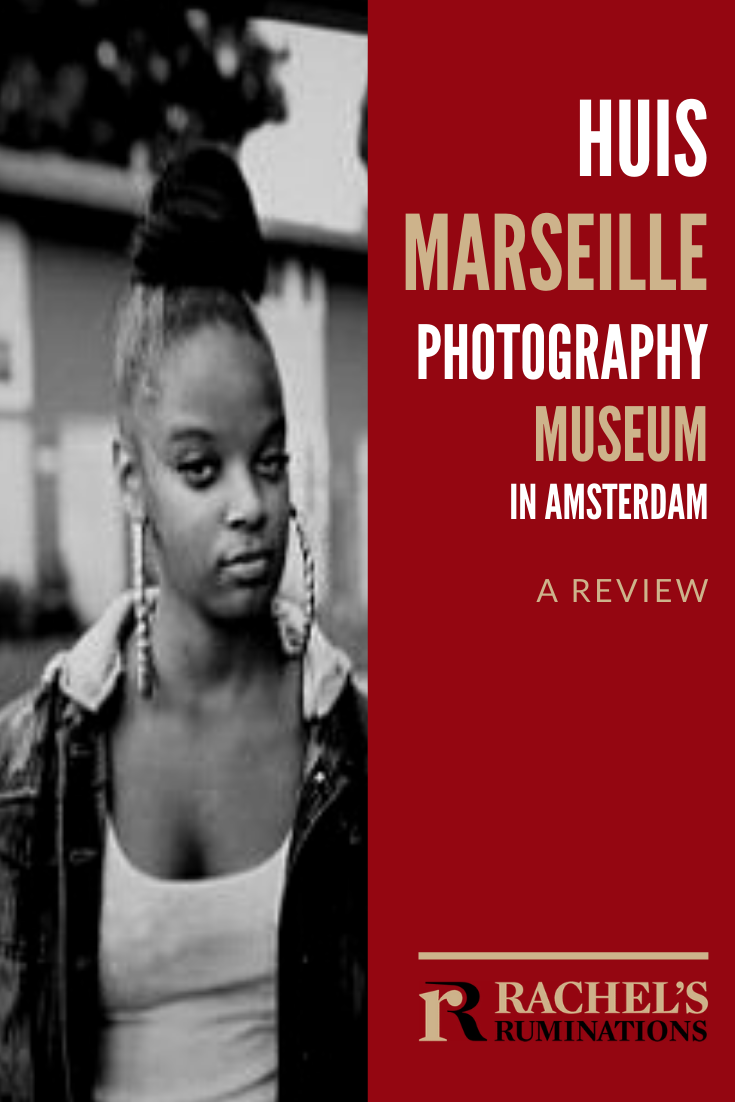 I was very happy when my daughter, visiting from the US, wanted to spend the day in Amsterdam, sightseeing with me. I gave her a list of museums I’d like to visit for my series on small Amsterdam museums, and told her to choose two.

My daughter, a graphic designer, chose the Spectacles Museum (now closed) and the Huis Marseille Museum for Photography.

I wasn’t thrilled at her choices. The Spectacles Museum sounded dull, like the Handbag Museum was (It wasn’t, and I’m sorry it closed!). And the problem with photography museums is that generally they have a changing roster of shows instead of a permanent collection of works, so you never know what you’ll get.

Nevertheless, she chose them, and I could write about them, so we went.

Bicycling along the lovely Keizergracht canal in the center of Amsterdam, we almost missed the unprepossessing entrance of the Huis Marseille. The sign was small and the door was up a short flight of stairs. The entrance hallway has surprisingly ornate plasterwork, all of it painted bright white.

The price wasn’t bad: €8 per person (now €9), but we had no idea yet what we would see. We both knew this photography museum in Amsterdam could be great or it could be a dud, depending on what kind of photography they were exhibiting that week. We hadn’t checked ahead, and we don’t know much about photography anyway.

It turned out we were lucky enough to discover two photographers we’d never heard of, both of whom have done fascinating work in two very different styles.

Housed in what was originally two Amsterdam merchants’ houses from 1665, Huis Marseille photography museum’s rooms are now mostly stripped to bare white walls and bare white ceilings, making them resemble purpose-built museum spaces. Some of the smaller rooms have been merged and opened up, particularly upstairs, where the ceiling follows the roofline. Visitors wander gradually upwards via short open staircases through one of the exhibitions, then descend through the other, in a neighboring series of rooms.

In two of the rooms, ornate ceiling paintings remain. One of them was painted by Jacob de Wit in the 18th century, and depicts Apollo surrounded by Minerva and the muses. You can see a bit of it in the picture above. I didn’t find any explanation of the other painted ceiling, but in any case both rooms present a pleasing contrast between traditional artwork and modern photography.

The exhibition “Metropolis,” by Dutch photographer Martin Roemers, consisted, as the name suggests, of photos of cities around the world. What’s unusual and special about them is the juxtaposition of movement and stillness in the crossroads and street corners he depicts, usually from a high vantage point. Using a slow shutter speed, Roemers reduces vehicles to streaks of bright light, while people are either still or appear as barely visible ghost-like images, depending on their movement. These photos stopped us in our tracks, studying the details of everyday street scenes in faraway cities.

I especially liked one photo of Times Square in which protesters stand still in the foreground while cars and bicyclists whiz past. Another fascinating one (above on the right) is a scene from India, I think, in which a small platform has been set up under an overpass and next to an intersection. Discarded shoes surround it, and a group of men kneel in Muslim prayer as traffic speeds by.

If you’d like to see more art in Amsterdam, check out these articles too:

Lixenberg visited and took portraits repeatedly over a period of more than 20 years, which allows her to show the continuity of families and relationships. Each individual stands quietly, most of them looking at the camera, and it’s remarkable how much these simple portraits and group photos give a sense of who these people are or were. Many appear angry, some resigned, some defiant. None of them smiles, not even the children.

The portraits are in black and white, taken against neutral backgrounds. They feel calm and quiet, yet the expressions betray tension.

Unfortunately, both of these exhibitions are no longer at Huis Marseille, where the displays shift about four times a year. The Huis Marseille does have a permanent collection but, according to their website, photographs are light-sensitive so they are not always displayed. Instead, they produce thematic exhibitions.

Before your trip to Amsterdam, check Huis Marseille’s website to see what exhibitions are running when you’ll be in town. Or just stop by randomly, as we did, and take what you get. Hopefully future shows will be as delightful as this one was.

Huis Marseille Museum for Photography in Amsterdam: Keizersgracht 401 (near the corner with Leidsegracht). This is a 20-25 minute walk from the Amsterdam’s central train station, or take the tram number 2, 11 or 12 to the Keizersgracht stop. Open Tuesday-Sunday, 11:00-18:00. Admission: €9 ($10).