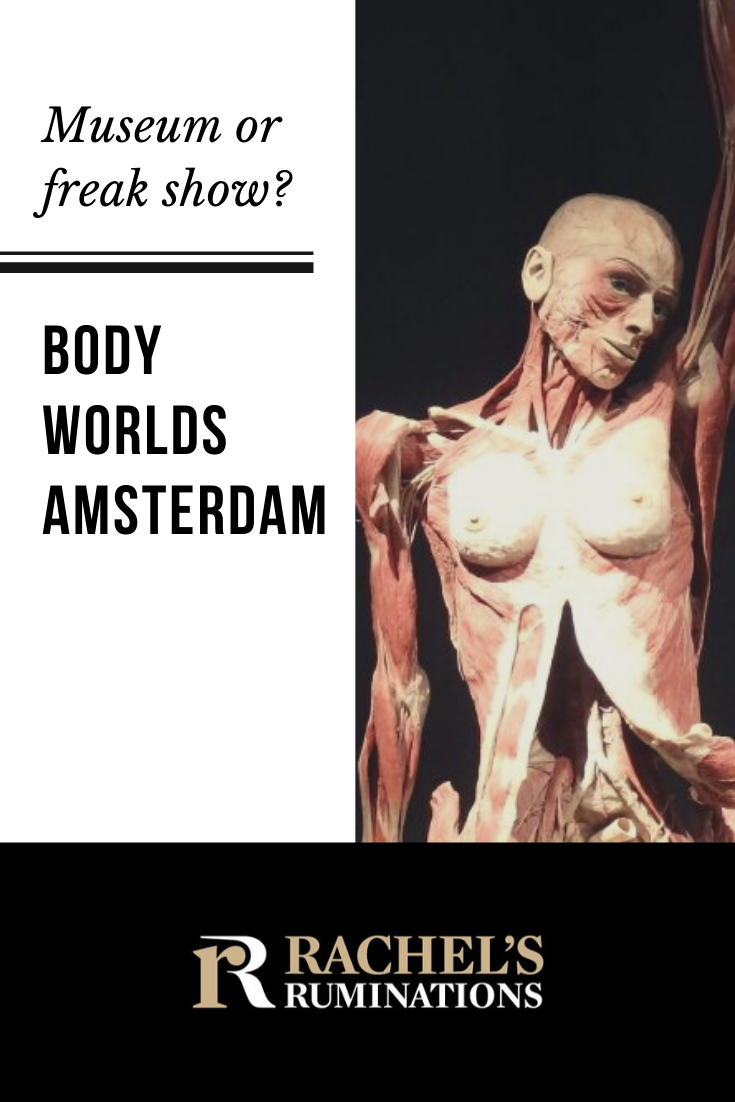 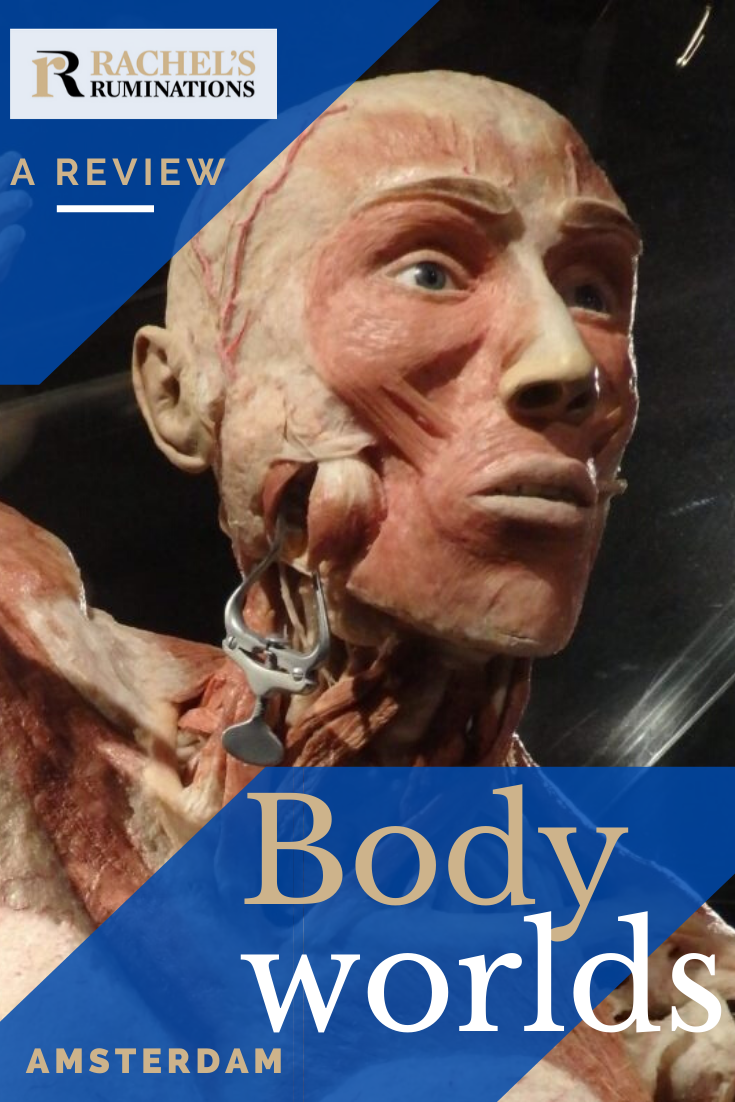 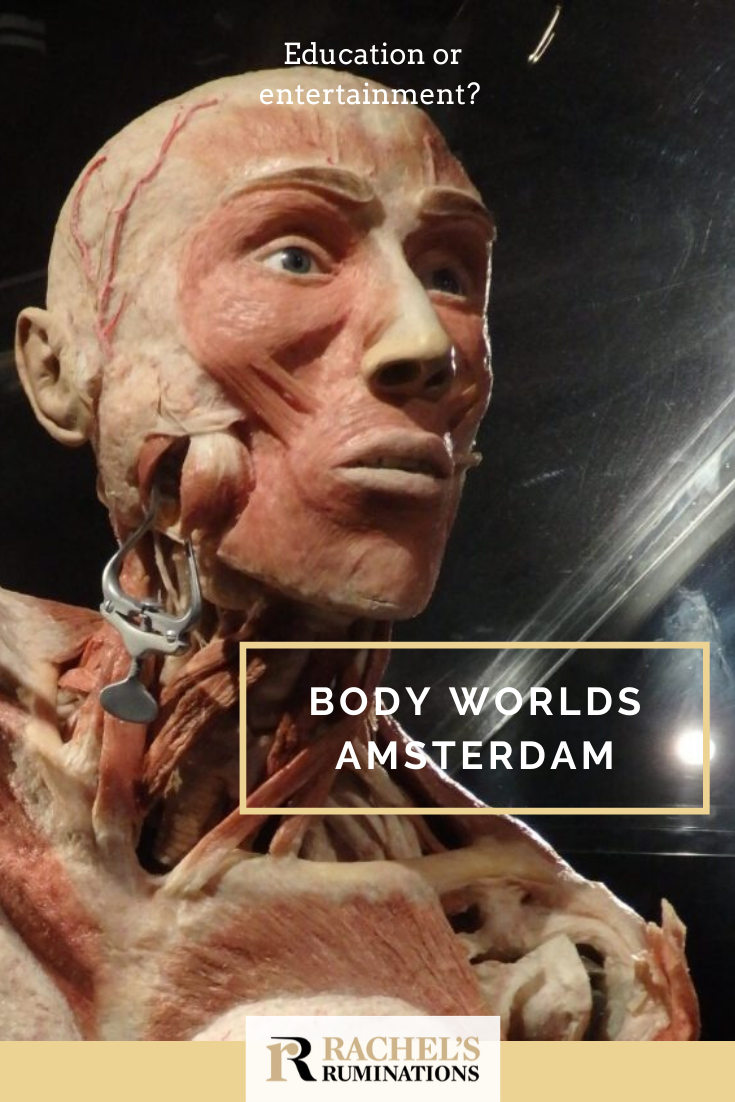 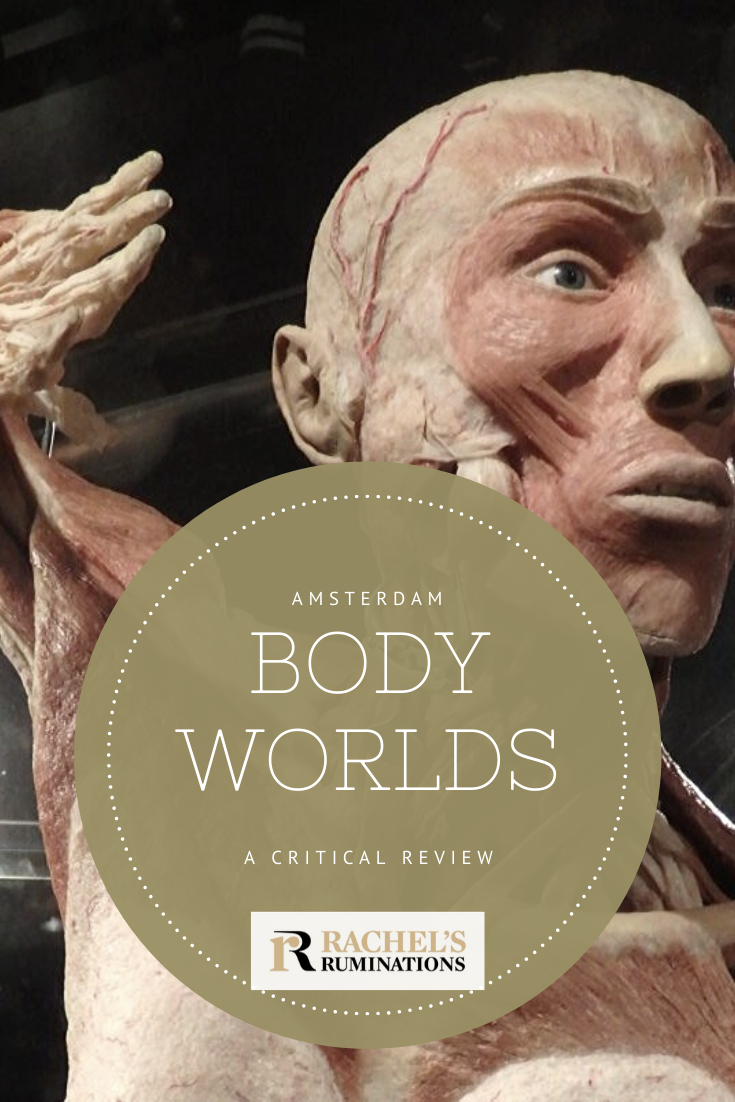 Body Worlds: The Happiness Project exhibit in Amsterdam is described on its webpage like this:

“More than 200 anatomical specimens of real human bodies show the complexity, resilience and vulnerability of the body.”

In other words, at Body Worlds Amsterdam we are viewing actual dead bodies which have been put through a preservation process called “plastination.” These people, we are assured, voluntarily willed their bodies to be used in this way. They chose to have their bodies plastinated after their death with the understanding that they’d be put on display.

Visiting the Body Worlds Amsterdam exhibition is not like visiting any other museum. Even viewing a painting like Rembrandt’s The Anatomy Lesson of Dr. Nicolaes Tulp isn’t the same. Rembrandt may indeed have seen that cadaver being dissected, but all we as museum visitors see is a painting, a representation of that dissection.

In the Body World exhibition, dead human bodies are not referred to as “cadavers” or “corpses” or even “human bodies.” Instead, they are “plastinates.” The implication, then, is that they are no longer human, giving us permission to view them as objects for our own education and/or entertainment.

At the same time, the creators of these “objects” seem to make a contrary claim in the decisions they’ve made about what to reveal and what not to reveal. While none of the plastinates, even the full-body ones, are displayed with intact skin, the creators have nevertheless left the key signposts to their human-ness. They’ve left the skin intact around the eyebrows, eyes, and nostrils. The ears are whole, and the lips remain. This inevitably draws the viewer—me—to think of them as human.

Because they are human, and because they are naked—actually, they’re naked-er than naked, since I can see inside them—I felt embarrassed to look at them.

When I managed to tear my eyes away from the faces, I was able to inspect other parts of their bodies: the muscles, the joints, the digestive system or respiratory system, or whatever other part is being illustrated in each particular display.

They are indeed interesting and educational. Sometimes separate body parts are shown. For example, one case shows just hearts: a healthy heart, an enlarged heart, the blood vessels within the heart, and so on. Clear signs explain each item in English and Dutch.

Between the floors, on the stair landings, big signs contain the sorts of trite “life lesson” statements that make the rounds of Facebook: “Find time to lose yourself in what you love.” “Don’t compare your insides with other people’s outsides.” “When we are together everything’s better.” And so on.

Each section has at least one full-body plastinate as a centerpiece, and for some reason each of these is posed in an active position. One is ostensibly playing rugby, for example, though it was pointed out to me that the ball he is carrying is actually an American football. One plastinate stands, rather puzzlingly, at the helm of a ship. Two, meant to illustrate joints and the use of artificial joints, are doing gymnastics, as far as I could tell, with the man holding the woman on his knee. One woman, illustrating the reproductive system, is posed on a swing in a provocative position: arm extended up the swing’s rope, legs splayed.

Despite my interest in the information that is displayed, my discomfort increased as I walked through the museum, and I struggled to define why. It occurred to me that I was behaving much like how we slow down to turn and stare at a car accident on the highway. Or how we tend to stare—or at least children do until they are taught not to—at people who are disfigured or missing limbs or in any other way outside the norm. Here, it is acceptable to stare.

I realized that Body Works Amsterdam (and presumably all of the other Body Works exhibitions around the world) is most akin to an old-fashioned freak show. We pay a high admission cost to stare at the freaks, but the fact is that the freaks reflect our own humanness. It’s a morbid self-titillation.

That feeling seemed more than confirmed when I reached the ground floor, which addresses sex, presumably in terms of how it contributes to happiness. The walls are mostly blank, except for peepholes here and there. Rather than allowing visitors to peer into a graphic peepshow, however, each one reveals a text about the physiology of sex: the sorts of texts that on the upper floors appear on the wall or informational signs.

The shocking part, though, isn’t those texts. It’s the plastinates in the central display case of the room: two of them, having intercourse. The female figure is positioned and cut in such a way that the genitals of both can be viewed, yet the man looks positively tender in the way he holds the woman in his lap.

Looking at this display, I felt more shame than embarrassment, like I was some sort of Peeping Tom. I wondered: did these people agree to showing their bodies in such an intimate pose? Did those two people even know each other when they were alive? They agreed to donate their bodies, but would they agree to their bodies being displayed in this way? And who even thought of positioning them in that way? Who went ahead and created this display?

It all seems disrespectful. These people died. Presumably someone mourned their deaths. Yet here they are, set up for all to see, or at least all who have paid the admission price for this bit of titillation.

You might also enjoy these articles from my on-going series on small museums in Amsterdam:

Gunther von Hagens, the inventor of the process of plastination, is quoted as saying

“The plastinated post-mortem body illuminates the soul by its very absence. Plastination transforms the body, an object of individual mourning, into an object of reverence, learning, enlightenment, and appreciation.“

If that is the intention, then the whole Body Worlds exhibit would be more acceptable if the plastinates were just shown sitting or standing, not in these various odd postures and certainly not in the act of having sex. The displays upstairs, or at least the straightforward ones that deal with a particular aspect of human anatomy or pathology, could certainly be called educational.

The full-body plastinates, however, are a freak show. They’ve been displayed in an intentionally unusual way in order not to educate but to entertain. And I doubt that most people who attend this exhibit go because they want to learn something; that’s just a perk. They go for entertainment.

That seems inappropriate, and a disturbing comment on our society.

What’s your view of the Body Worlds exhibitions? Have you visited one of them? Some of them display plastinates of animals rather than people. Would that change your view? Please add a comment below!

If you decide to go, click here to order tickets.

Body Worlds Amsterdam: Damrak 66. This is less than 10 minutes’ walk from Amsterdam Central. If you need to take public transportation to reduce how much you walk, you can take a tram from the station and get off at Dam. With walking to the tram and from the tram, it’ll take about the same amount of time.