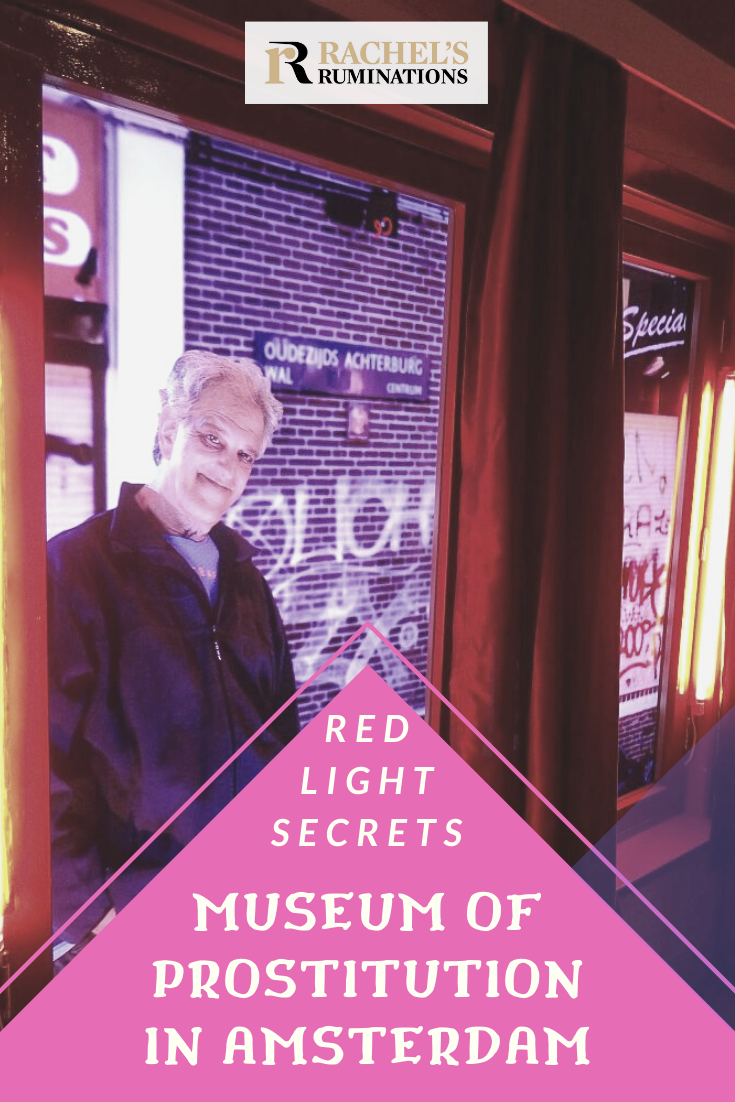 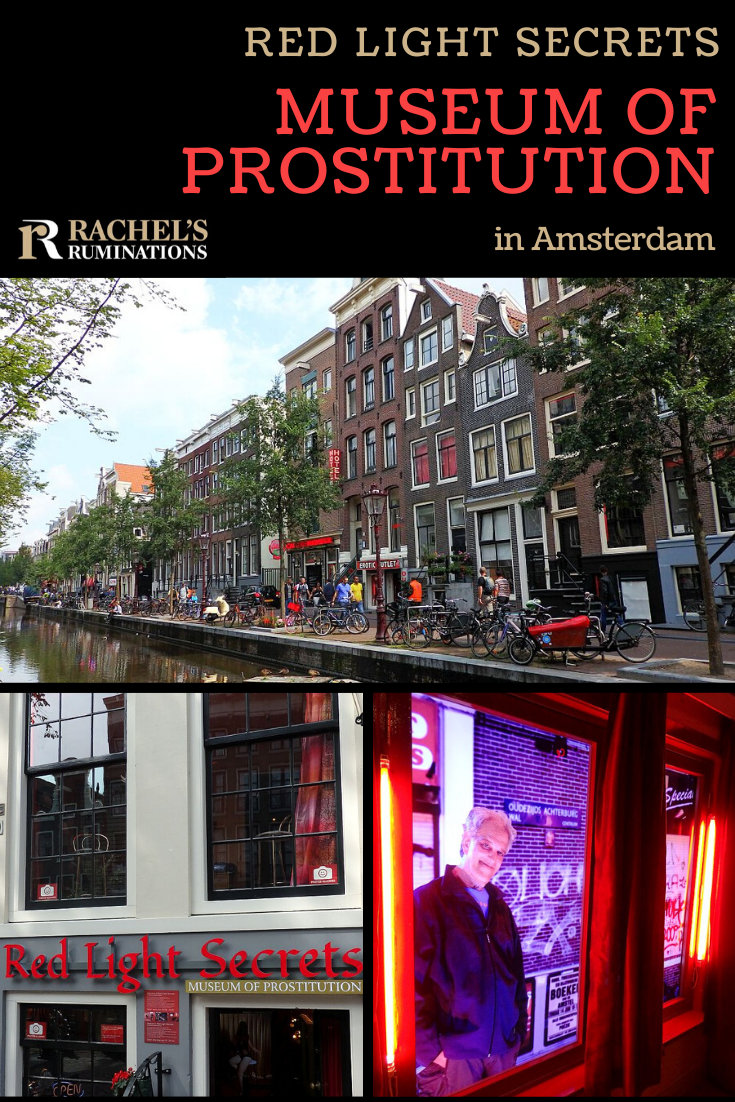 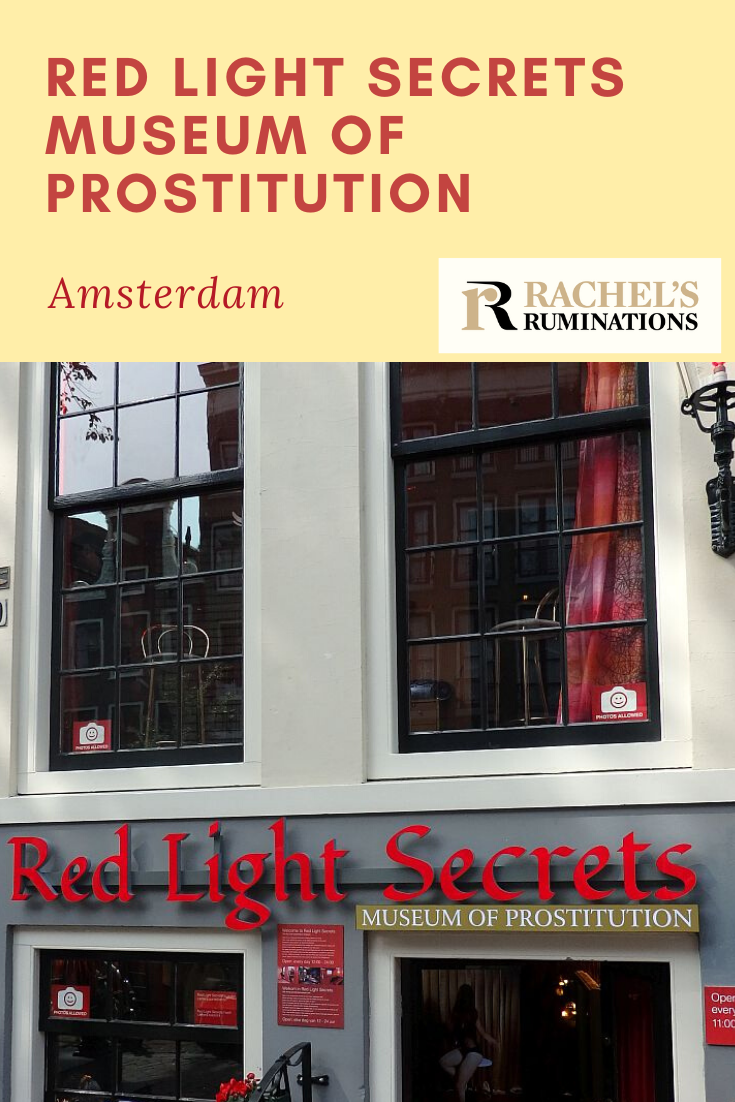 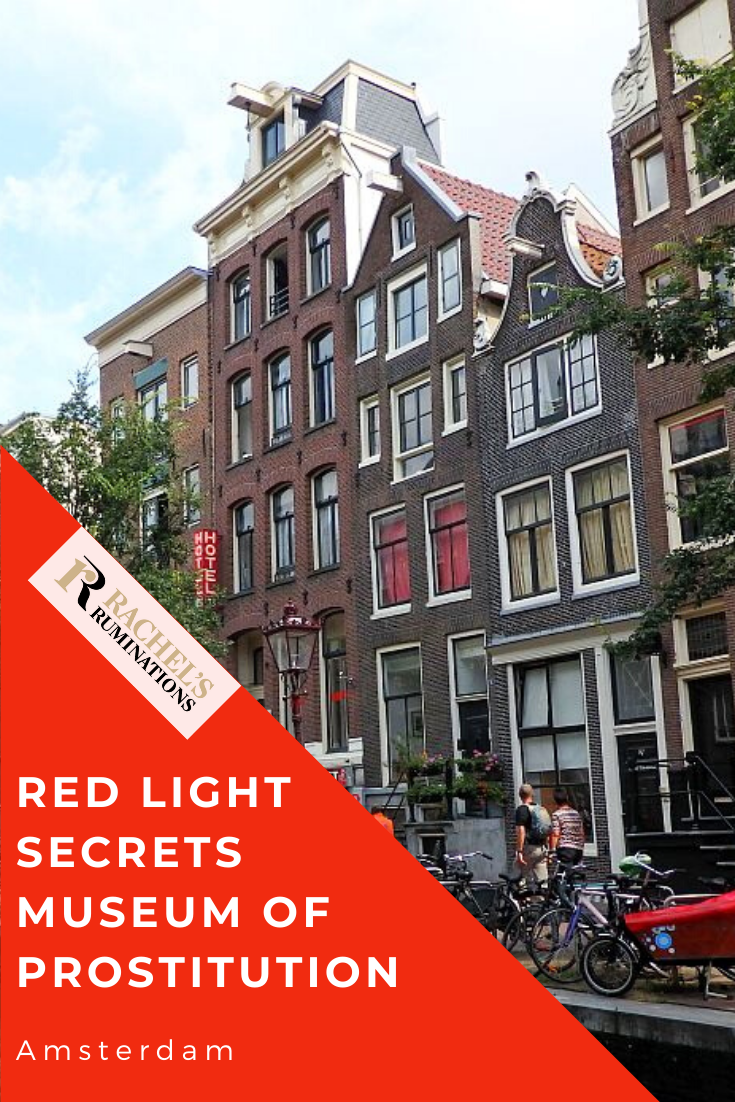 What I expected on visiting Red Light Secrets Museum of Prostitution was a presentation that titillates and that presents prostitution as a happy profession with practitioners who choose to become prostitutes.

Note: I’ve updated this post with some remarks from a “part time excort whore” who commented on it on Twitter. See below.

I expected that because I had read several blog posts by visitors to Amsterdam that made it seem this way. They emphasized the fun of pretending to be a prostitute in a window in the red light district, for example. Very light-hearted, almost mocking posts, written from the point of view of a tourist passing through Amsterdam quickly.

Red Light Secrets’ own website also leans toward the prurient side: emphasizing the audio stories of Olga, “Amsterdam’s most famous lady of the night” and showing visitors laughing and taking selfies.

What I got was far more serious, not particularly titillating, except maybe the room devoted to bondage and sado-masochism. The museum points out clearly a) the dangers prostitutes face daily, including a display listing murdered prostitutes next to a small altar, and b) that many women get into prostitution against their will.

I should warn you that the museum is smack-dab in the middle of the Red Light District. It’s one of the oldest areas of Amsterdam, lined with beautiful brick rowhouses along picturesque canals. Yet it shouldn’t surprise you as you walk along these pretty streets to see large windows on the ground floor lit with red neon lights, where scantily-clad women sit or stand, waiting for customers. Mostly they look bored.

Prostitution in the Netherlands

The museum also informs visitors of the facts: numbers of prostitutes—to the extent they can be counted—and it details what the actual rules are of legal prostitution. (Yes, legal prostitution is subject to very specific rules: working conditions, pay, health checks, rental charges for their windows, taxation, client behavior.)

Mostly the museum conveyed to me a feeling of sadness. The goal seems to be that visitors gain some respect for women in prostitution, and it succeeds to some extent, but I mostly felt sorry for these prostitutes, both the legal and illegal, for having to do this for a living. The designers of the museum don’t seem to be asking for pity, however; they emphasize respect.

The museum claimed that 70% of prostitutes are in committed relationships or married. Could that really be so?

In any case, the museum is a remarkably well-presented, well-lit, mix of exhibits and videos. Two small rooms, for example, are representations of how prostitutes’ rooms in De Wallen, the red light district of Amsterdam, might look: one basic, one more upscale. The touchingly ordinary objects in these rooms—stuffed animals, for example—accentuate the humanity of the people involved in this seamy profession.

One display is simply a collection of objects that clients have left behind, which must be embarrassing, especially when one of the objects is an ID card that is perfectly readable!

One room is particularly effective in creating empathy with the prostitutes. Visitors sit on high stools, like prostitutes often do in red light district windows, and watch screens the size of windows on the wall. The screens show the scene outside as a prostitute sees it: creepy men ogling them, leering. Some stop and make lewd gestures, then wander away again. Some point and laugh. Disapproving women shake their heads, walking by quickly, tsk-ing. It’s a powerful experience for visitors to the museum.

The 10 Commandments of Prostitution

Visitors to Red Light Secrets learn the 10 commandments of prostitution: a list spelling out the rules of how to treat prostitutes:

It’s easy to suppose that all of these things happen; otherwise, a 10 commandments of prostitution wouldn’t be necessary.

If you’re planning to take a canal cruise as well as visit this museum, this combination ticket covers both.

One room is a small theater, showing an excellent ad about human trafficking for prostitution:

Not surprisingly, no one knows exactly how many illegal prostitutes work here in the Netherlands. Lots of safeguards are in place for those working legally, such as the right to turn down a client, to an agreed wage, to set their own working hours, to see an accounting of how much their employer withholds for taxes, etc. Illegals don’t get any of these rights. Red Light Secrets does a good job of presenting both worlds.

This is an excellent museum, which I would certainly recommend. It presents a measured, intelligent, pragmatic view of an institution that is usually looked at with derision and disapproval. It allows visitors a more nuanced understanding than the popular image of Amsterdam would normally allow.

I had an interesting exchange with a woman I “met” on Twitter, @KanStaandPijpen, who describes herself as “Part time escort whore, full time human. trying to cut through the bullshit believed about sex work. Tool of choice: Snark. NOT here to get you off.” Here is her response to this article about Red Light Secrets:

“We in the business think it’s just another way to exploit us by presenting us as passive objects of sadness. Just like every other thing about us without us.”

“I visited once. I thought it was a shabby attempt to conjure the air of delapidation some brothels try to give off. Information on offer is not that accurate, the emphasis is on making us look like fallen women, and our clients as if they take advantage of us.”

When I responded with “From my outsider’s point of view, it seemed respectful of the women and scornful of the customers,” she added:

“Pity isn’t respect. Painting us as people fallen on hard times isn’t respect. The fact that it is our choice to do this work is de-emphasized to the point of denial. That bothers me, and I’m not alone in that. And our clients don’t deserve scorn.”

And another point of view…

She also sent me a link to an article (in Dutch), on a website called De ervaringen van een prostituee (The experiences of a prostitute). Scroll down to read her reaction to the museum. The writer also doesn’t think the museum is very accurate, making it all seem grubbier than it actually is. She’s particularly scornful of the museum’s criticism of the clients. She writes that the museum doesn’t show visitors the groups of tourists, especially the English, who take photos and yell, or the people who walk by with condemning looks. In general, she disagrees with the assumption that most of the “girls” are victims in one way or another.

Note: I paid full price and the museum personnel were not even aware of my intention to blog about it.

Have you visited this museum or walked through the red light district in Amsterdam? It’s a common stop on Amsterdam itineraries. What are your feelings about it?

If you want to buy tickets in advance, you can do so by clicking here.