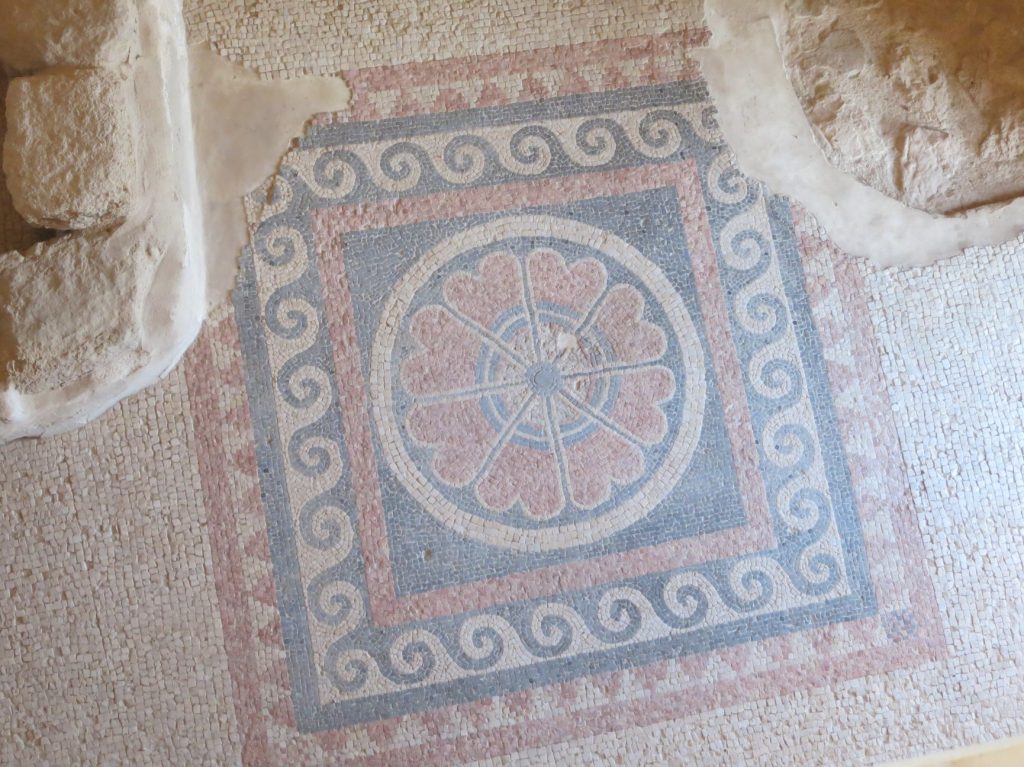 a Herodian-era mosaic at Masada

In about 66 C.E. (Christian Era, which is the term Israelis use for A.D.), a Jewish rebel movement captured a great fortress and palace built by King Herod. Called Masada, it stood high above the Dead Sea on a flat-topped mountain, surrounded by desert.

After the destruction of the Second Temple in 70 C.E. by the Romans, more members of this rebel group fled to Masada rather than be captured and enslaved by the Romans, until there were about 960 men, women and children living in this mountaintop community.

The Siege of Masada

The Romans placed the entire mountain under siege, surrounding it with a siege wall and a series of military encampments. The Jews, meanwhile, had sufficient supplies of water and foodstuffs to survive for two years.

Gradually the Romans built a ramp up to the top of the mountain, building onto a natural spur on the mountain. While the Jews did their best to hold them off by attacking the ramp builders, eventually it became clear that they would be defeated: the Romans topped the ramp with a siege tower, including a battering ram to break down the stone walls of the fortress.

The Jews fought the Romans’ final attack, but knew that their cause was lost. They decided that it was better to die than to be enslaved by the Romans. At the same time, they wanted the Romans to know that they had not died for lack of food, so they burned all of their belongings except for their food stores.

The men drew lots to decide who would carry out their mass suicide. (Nothing seems to be known about whether the women had any say in the decision.) Those ten men supervised the killing/suicide of the rest of the men, women and children. They then killed each other until there was only one left, who committed suicide.

This story is treasured by the Israelis today: the people of Masada are national heroes. For a time, members of the Israeli army were sworn in here, so that they would feel a connection to this kind of heroism. 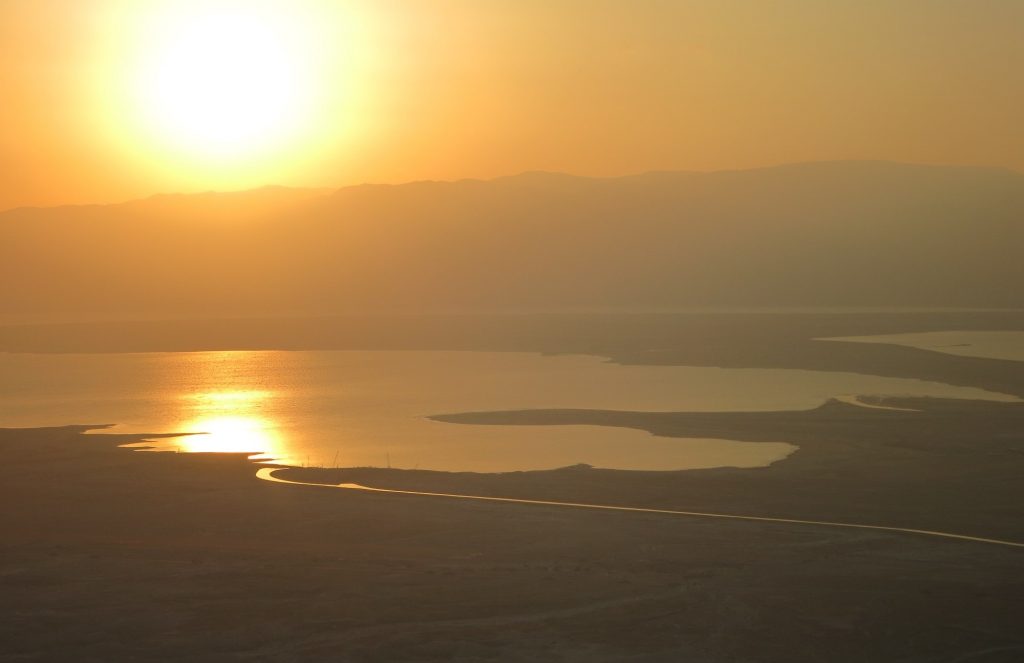 just after sunrise, as seen from Masada

We visited the extensive ruins this morning, climbing up in time to see the sunrise from the top. The ascent itself was grueling, but the breathtaking view over the Dead Sea to Jordan was our reward, accompanied by a much-needed breeze.

Many of the structures up there are still partially standing, and the Herodian-period construction and Jewish alterations were interesting to explore with the little energy we had left after the climb. (If you don’t care about seeing the sunrise, there is a cable car that reaches the top in three minutes, but it only operates from 8:00 on.) It gives a good idea of what life was like there, both during Herod’s reign and during the rebel-controlled period. The remains of the palace, storehouses, a synagogue, the cisterns, the bathhouses, and so on, are all visible, with a backdrop of huge desert views.

a view to the north from Masada

We eavesdropped for a time on a tour group from the UK: Jewish teenagers led by an Israeli guide. As she told the story of Masada, we (and she) were surprised at the reaction of some of the kids.

One simply said “Suicide is wrong. They shouldn’t have done it.”

Another said, “It was stupid. If they were going to die anyway, they should have fought until they were killed, not committed suicide.”

Another added, “There had to be another way.”

So much for heroism.

Nevertheless, the Masada Jews are heroes here in Israel. Keep in mind that almost all adult Israelis, men and women, serve in the army as young adults. They remain on reserve duty up to a certain maximum age, so they can be called up again as needed.

There is a palpable connection here between the Masada rebels and the Israeli army of today, in my opinion. The idea that they are persistent and stubborn and will not give up, even if it means dying for what they believe in – that informs their attitude toward the current conflict. Passivity is not an option, and not striking back would be weak. Their freedom – in this case, the freedom from fear of being hit by Hamas rockets – is more important than the whole world’s opinion.

The parallel, though, is awkward and unsettling. After all, whether you believe they did the right thing or the wrong thing by committing mass suicide, the Masada rebels lost in the end.

Please feel free to comment below, but remember: keep it civil!

Open
If you watch Death in Paradise, you might recogniz

Open
Another picture from #Deshaies in #Guadeloupe. Thi

Open
If you watch Death in Paradise you'll recognize th