Floating in the Dead Sea is one of those things people put on their bucket list: something that has to be experienced once in a lifetime.

The Dead Sea is called the Dead Sea because its salt and mineral levels are so high that nothing lives in it. It is also the lowest elevation on earth: 427 meters below sea level, according to Wikipedia. Bordering Israel and Palestine on one side and Jordan on the other, it’s shrinking quite quickly because its main source of water, the Jordan River, is mostly diverted these days, so less water comes in than the amount that evaporates.

I’ve been to the Dead Sea three times now. The most recent visit was last week, so here are some of my observations and advice:

floating in the Dead Sea

It is certainly fun to do … for about ten minutes. At first, getting into the water, the peculiar sensation of bobbing immediately to the surface (even my rather sizeable bum bobbed right up) gets a lot of laughs.

But then what? Swimming isn’t really possible, except a vague backstroke with your hands under water. Anything that involves splashing is a very bad idea: even just a drop of this extremely salty water in your eye is excruciatingly painful. Just ask my son; it happened to him. Ouch.

The water is lukewarm, so it won’t leave you feeling refreshed, and the high salt and mineral content makes it feel a bit slimy. The tiniest abrasion-on-your-skin-that-you-didn’t-even-know-you-had will sting at first, though that will fade within a few minutes. If you have a scraped knee, or any other sizeable wound … well, I suggest you give this experience a miss.

We took our plunge last week at the Ein Gedi Spa in Israel, though it’s also possible to visit it from a public beach or from the Jordan side. The Ein Gedi Spa was built in the 1980’s and the Dead Sea has gotten smaller since then, so the spa is no longer on the shore. Instead, a “train” – really some carts pulled by a tractor – took us down to the water.

The spa has a large main hall which is partitioned into men’s and women’s changing rooms, shops and other areas, but the partitions do not reach to the high ceiling, which makes it rather loud and echoing. Outside is a regular chlorinated freshwater pool, only moderately cooler than the air.

I didn’t sample any of the specialist treatments available at the spa: massages and facials and whatnot. I did try out one of the sulfur pools, which are small and unadorned and, frankly, unattractive. The water is quite warm and, as the name suggests, it has a high sulfur content. At home in the Netherlands I would have enjoyed this. Here, where I was already too warm, going into such a hot pool didn’t appeal to me.

The amenities down at the water are pretty limited. There are a few shelters to provide a bit of shade: definitely necessary in the summer when you’re at below sea level. There are basic showers consisting of a row of showerheads protruding from an overhead pipe, each with a pullcord to turn the water on. We certainly needed a shower once we emerged encrusted with Dead Sea salt after our dip, but these showers are not at all refreshing: the water is uncomfortably hot.

Right next to the showers there’s a large mud puddle, with semi-submerged plastic chairs when we were there. This is no man-made, tiled, wading pool kind of mud bath. It is just a place in the beach where water runs off from the showers, so a mud-pool has formed. 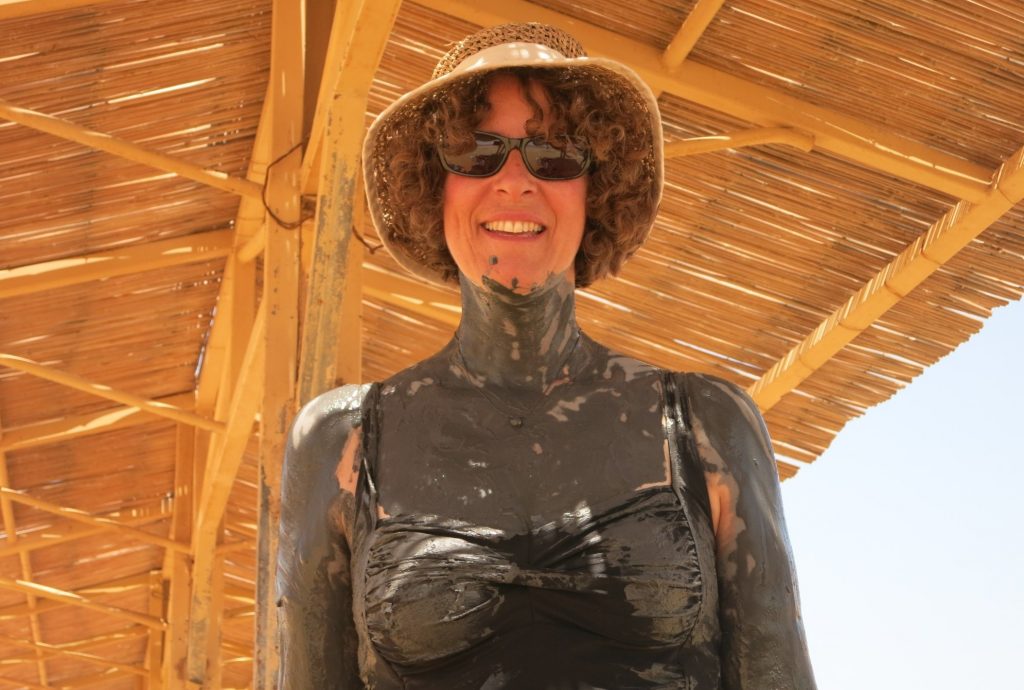 Taking our cue from the people who were already there, we carefully climbed down into the mud pool, afraid of slipping on the slimy, black mud. We scooped up handfuls of it – after being advised by a mud-covered woman that we should take the mud from under the chairs where it wasn’t so hot – and smeared it all over our bodies. Still taking our cue from other visitors, we sat in chairs in the sun, waiting for the mud to dry so that it tightened on our skin, forming a dry, gray crust. The routine seems to be to rinse it off in the showers and do it all over again, though I didn’t. I think it’s supposed to be good for your skin, but I can’t attest to that after doing it just once.

As you can tell, I’m not overly enthusiastic about visiting the Dead Sea. I’m glad I did it, and I’m glad I went back this time so my kids could experience it, but I wouldn’t recommend more than a brief stop to take a dunk and then leave. It combines very well with a visit to Masada, which I highly recommend.

Have you ever been to the Dead Sea? Did you enjoy it more than I did? Feel free to comment below.