A protest march in the West Bank turned violent last night when it was stopped by riot police at the checkpoint between Ramallah and Jerusalem.

Also last night, I had a very pleasant meal with my cousins at an Italian restaurant right outside the Jaffa Gate to the Old City of Jerusalem.

The coexistence of ordinary, everyday life with outbursts of anger and violence is what keeps surprising me since we arrived a few days ago.

In the early evening, we arrived at the Jaffa Gate, which was blocked by a mob of people, mostly men–most of whom looked like Palestinians–and a scattering of tourists like us. Police at the gate were checking papers and letting some of the men and all of the tourists through. 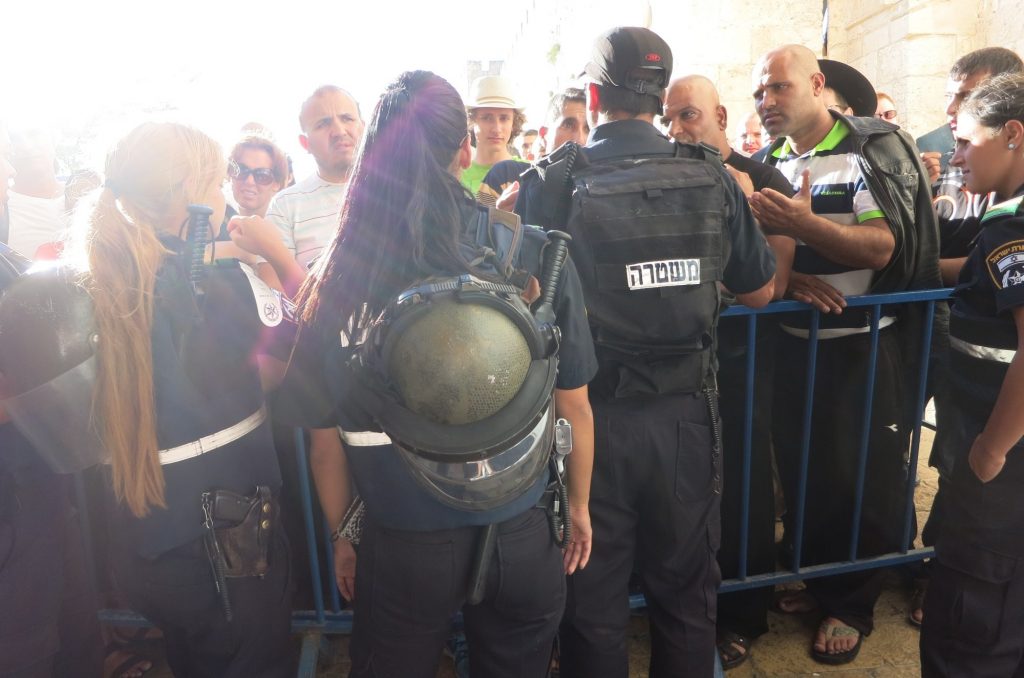 waiting to be let into the Jaffa Gate

We figured that this was probably an attempt on the part of the Israelis to keep suicide bombers out, and we went on to the Western Wall, where the bar mitzvah boy and his family had gone to say a prayer. They decided to do this last night instead of tonight because tonight is the end of Ramadan, and they feared that there would be trouble at the wall.

They had been warned by guards to make it quick. Prayers at the mosque above the wall would end soon, and they didn’t know if people up there would start throwing stones down.

Nothing happened. People prayed below the wall and people prayed above the wall. I’d bet they were all praying for peace. 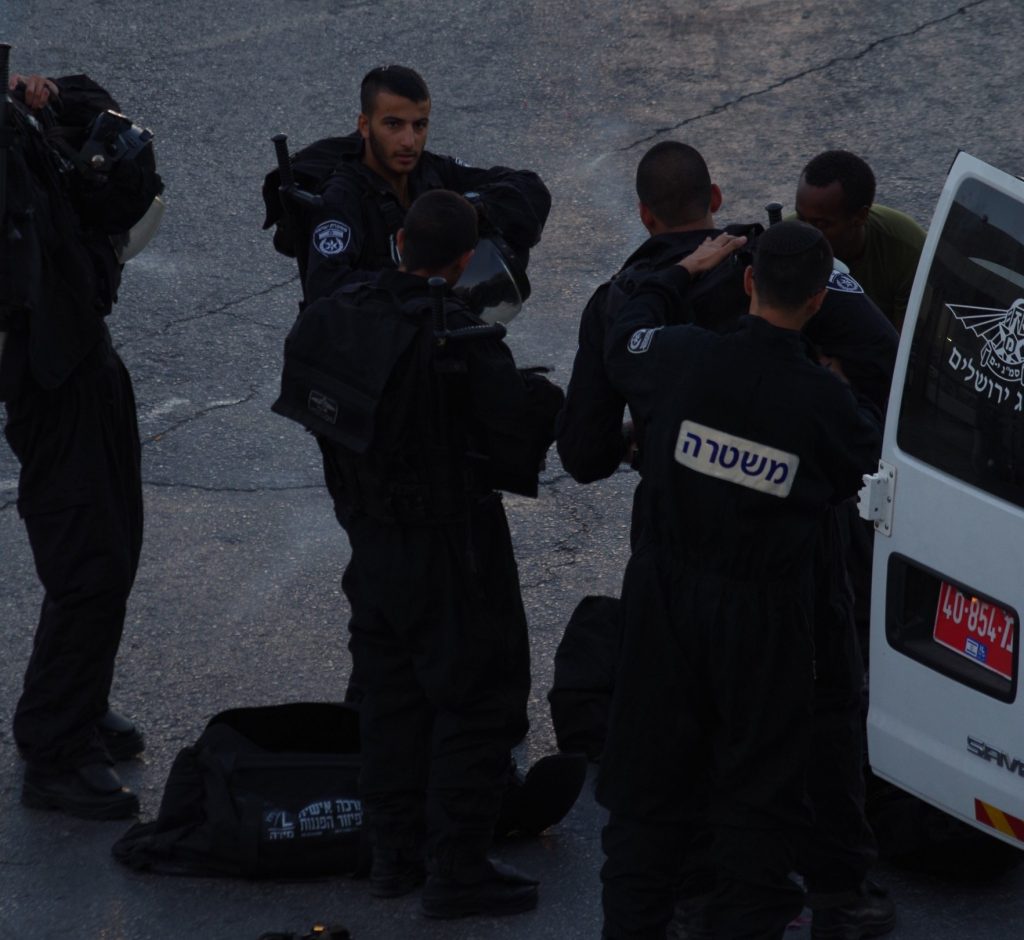 On the way back through the Old City to the Jaffa Gate, as we were strolling and chatting with the family, we noticed that large police vans had pulled up and men were busy dressing themselves in riot gear. Something was going to happen: that was clear.

At the same time, lots of people were strolling around in the cool evening air: Hasidic Jews with their children trailing after, tourists with cameras, mothers with babies in strollers. The evening sun on the light stone of the ancient walls turned them golden. The Dome of the Rock shone in the sun. A flock of sparrows chirped loudly in a tree above the Western Wall plaza.

Despite the proximity of heavily-armed men (my son explained that those wider-mouthed rifles launch tear gas canisters), no one seemed to be in a hurry. They strolled. They stopped and looked. The tourists took pictures. Just another lovely evening in the Old City.

We left the Old City and settled into a restaurant on a new, chic, pedestrian shopping street just outside. All along our walk to the restaurant, more riot police passed us in the other direction, and, still, life around us went on as usual. In this shopping district, the stores were still open. The bar mitzvah boy’s grandmother bought him a new shirt at The Gap. A “living statue” performed for some children. The jewelry store was open.

My cousin told me today that she’s experienced three of the sirens, warning of incoming rockets. She said that she was in a restaurant during the first one. Everyone calmly stood up and moved to a safer part of the room, away from the windows that could shatter. After a few minutes, they went back to their tables and enjoyed their meals.

The Israelis have become so used to living this way that it’s become mundane. Yes, they’re concerned. Yes, they keep informed of what’s going on and where. Yes, they want the fighting to stop. But they seem unshakeable until something actually happens near them.

I suspect that the same applies to the Palestinians in the West Bank, since this conflict is primarily happening elsewhere: in Israel where sirens go off, warning of incoming Hamas rockets, and in the Gaza Strip, where Israeli retaliation is ongoing.

I haven’t talked in great detail about the conflict with anyone here yet, but so far the consensus among Israelis I’ve met is this: they’re fed up. They want peace. But they want real peace, without random attacks from Gaza.

I suggest, “But if Israel stopped the attacks on Gaza, Hamas would come under pressure to stop their rocket attacks, and eventually they would.”

Their argument is “But we’ve tried that and they wouldn’t. They’ve been shooting at us for years and we didn’t respond. It didn’t help.”

In the meantime, waiting for the peace they’re praying for, life goes on as usual.

Feel free to comment below, but please keep it civil! Remember that I am not a journalist and am not attempting to “cover” the story comprehensively or objectively. I am a blogger, reporting what I see and feel and that’s all.