When I told people several months ago that I was planning to go to Israel, their reaction was usually “Oh, how interesting! I’d love to go there someday!” or “Really? How exciting!”

By the time I told people a couple of weeks ago about our trip, their reaction had changed to “Really? Is that a good idea right now?” or “You’re taking your children?” or “You’re still planning to go?” The reason we planned this trip was that a cousin of ours is having his bar mitzvah. We could celebrate that with him, and at the same time catch up with a big branch of my family that we rarely get to see. My husband and I also see it as a great time to show our kids Israel. They’ve been here before, but they were too young to understand what they were seeing. Now they’re old enough to understand Israel’s incredibly rich history and the more recent political developments.

the view from a cousin’s house

Despite the conflict that has broken out here, yes, we decided to go ahead with our plans. Here’s why:

I think it’s safe to say that Jews all over the world support the existence of Israel. This does not mean we all support everything Israel does. It just means we support its existence.

For us (Jews outside of Israel), Israel is not home, but it is a place of refuge. Because of the Israeli “Right of Return,” any Jew from anywhere can emigrate to Israel if they want or need to. It gives us a safe feeling. If we are no longer welcome wherever we are living, we have a place to go. It’s interesting to note that there has been a significant wave recently of French Jews “making Aliyah”: emigrating to Israel.

American Jews, in particular, have been strong supporters of Israel both economically and politically since its founding in 1948. And Jews from all over the world go to Israel on vacations to see the holy sites.

When conflicts break out in Israel, though, these vacationers cancel their trips. 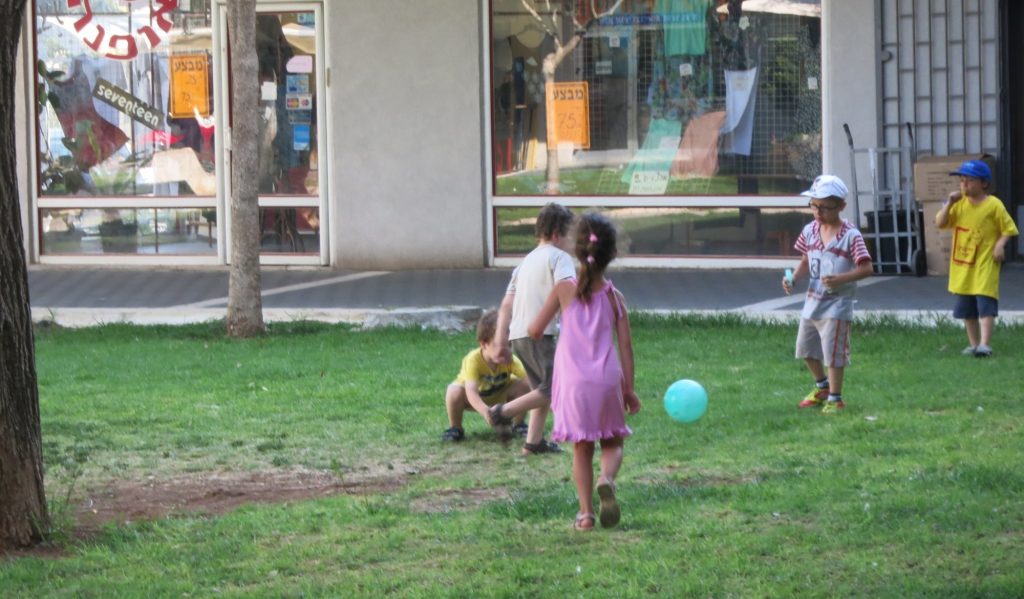 children at play at a Jerusalem shopping center: life here seems to be going on as usual, but there’s certainly tension in the air

This sends a very mixed message: “We support you, and we want you to live there so that Israel will be available for us to run to if we need it. But we don’t want to take any risks, so we’ll stay away.”

So it’s okay for the Jews in Israel to live every day of the year under the threat of rocket attacks from Gaza (and this has gone on for years; it just didn’t hit the news most of the time). Yet we can’t take that same risk for just a two-week vacation.

If we support the existence of Israel (and I don’t mean supporting everything the Israeli government does – I certainly don’t.), we need to show enough solidarity to visit when we say we’re going to visit.

Besides the principle of showing solidarity for Israel in general, I also felt that if I cancelled at the last minute, I would be disappointed and my relatives would feel let down.

I’m not going to get into a discussion here about the conflict itself: the Palestinian rockets shot into Israel, or the Israeli retaliations that are taking place now. This post is just to answer this more personal question: why we chose to come here anyway.

Feel free to comment below, but please keep it civil!