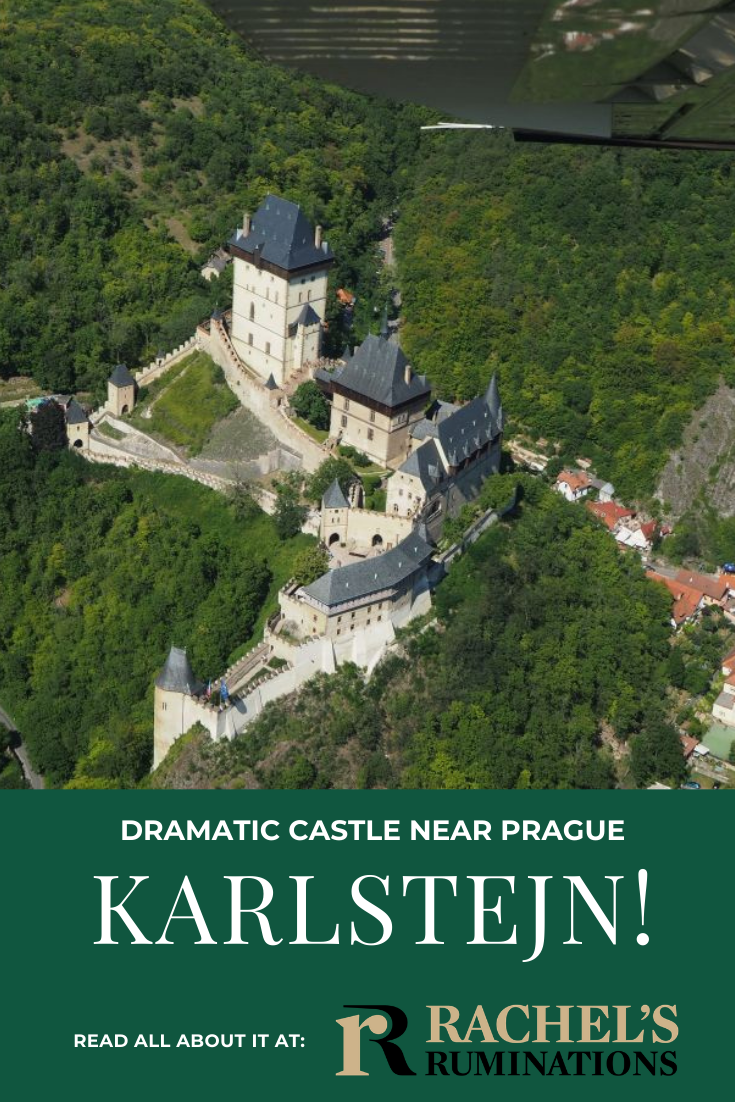 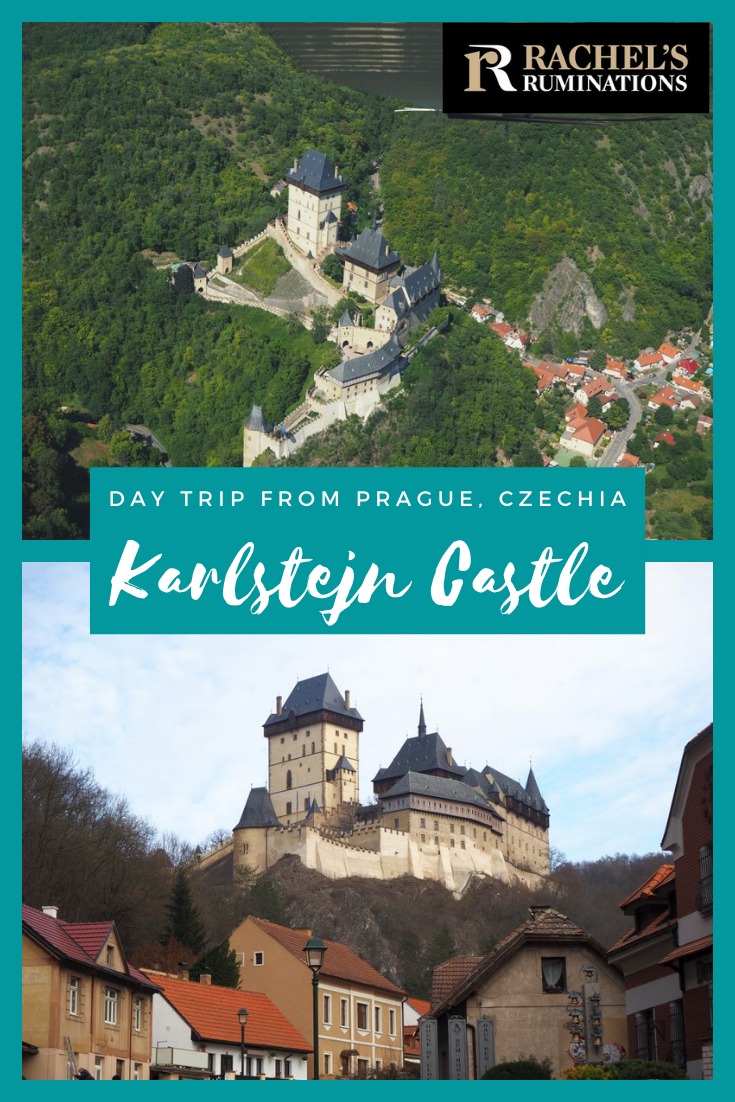 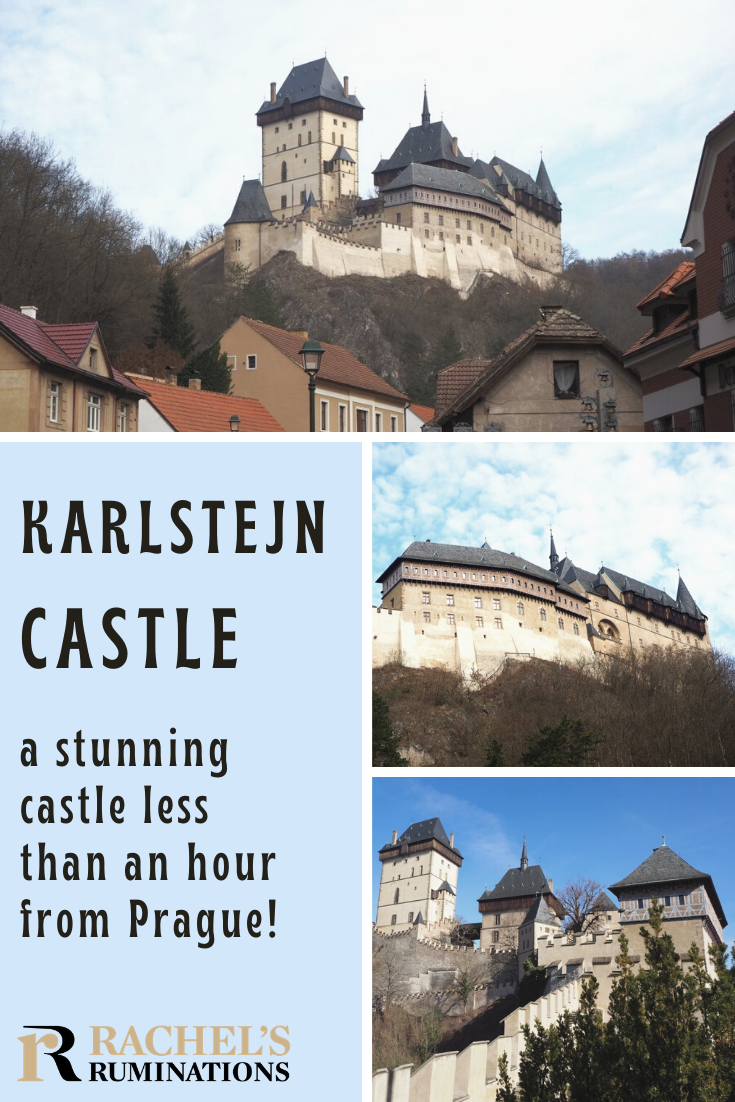 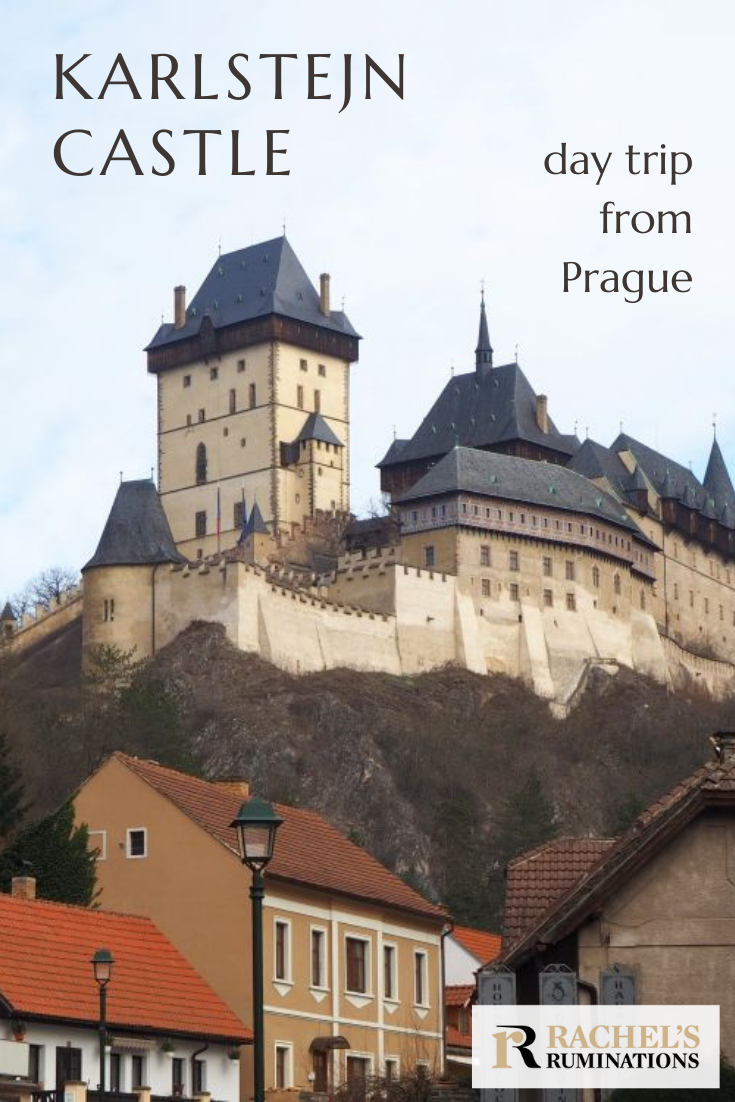 It took me three tries before I got to visit Karlstejn Castle in Czechia. I’d wanted to see it ever since my terrifying flight in a teeny-tiny airplane from Czech Airport, when I got, quite literally, a bird’s-eye view of it.

Disclosure: This post contains affiliate links. That means that I’ll receive a small commission on anything you buy through clicking the links. This will not affect your price.

The first time I tried to visit I was on a road trip across Czechia from Ostrava in the eastern end of the country. I had two days, and tried to fit in as many Czech UNESCO sites as I could. On my last day, with a flight scheduled in the evening from Prague Airport, I figured I had plenty of time to swing by Karlstejn Castle from Prague before heading to the airport.

Wrong! The route is not a highway, so it’s not as direct as it looks. On top of that, the parking lot is far from the castle itself. I parked, but then learned that it would be a good twenty minutes to walk up to the castle. It can only be viewed on a guided tour, and I didn’t have time to walk up, take the tour, walk down and still catch my flight.

The second time was on my next trip to Prague in mid-February. My husband came along this time, and I insisted that we had to go to Karlstejn Castle from Prague.

Note to self: I really have to do my research better. I hadn’t checked the castle’s opening hours, and they are quite limited in the winter. By the time we got there, the castle was due to close in a half-hour and we’d missed the last tour.

“Third time’s the charm.” On the same trip, now aware of when it was open, my husband and I stopped at Karlstejn again and finally got to see it.

While I had seen the castle before – once from the air and twice in passing from the ground – the walk up the hill to the castle shows how formidably situated the castle is.

This was for good reason. Built by the Holy Roman Emperor Charles IV, King of Bohemia, in the mid-14th century, its purpose was not just for it to be a safe place to live. Only Charles IV and his son Wenceslas IV ever lived there. The castle’s primary function was as a well-guarded place to store the imperial crown jewels as well as various religious relics of great value. It succeeded in this purpose for about 200 years, at which point the treasures were removed to be stored in Prague instead.

The village of Karlstejn is small and nestled among the forested hills. It stretches along a curvy road up to and past the castle, which perches above the village on a rocky outcropping. As far as I could tell, the village is entirely devoted to tourism, offering a range of shops and restaurants to the tourists who climb up the road to the castle.

Here are some other articles you might like to read if you’re planning to travel to Czechia:

We took the walk slowly, snapping pictures from every turn in the road. Arriving at the castle itself, we bought tickets at the little ticket window and waited until the next tour. The castle cannot be visited independently; only on a guided tour. Since it was February, it was not crowded, so we didn’t have to wait long.

By the way, if you can’t manage the 20-minute uphill walk, other possibilities are available. A taxi van shuttles people up and back, or you can splurge for a horse-drawn carriage.

If you’d rather stay in an Airbnb accommodation, this link will get you there.

I have to admit the tour itself was a bit disappointing. This wasn’t because the tour guide wasn’t knowledgeable; she was. It was because, after seeing such a magnificent castle externally, I had my hopes up for an equally magnificent interior. In fact, the inside was rather empty and mostly sparsely furnished. I like when a castle looks like it would have looked when it was inhabited because it helps me imagine castle life. This one didn’t.

Nevertheless, the tour passed through some interesting rooms. Some had ancient wall and ceiling paneling. One had an ornate bedframe. Another large, echoey hall had a stool that the king had made himself to lean on when he prayed. While there weren’t that many furniture pieces, most of the ones I saw were prettily decorated, either painted, carved or inlaid.

The basic tour vs. the exclusive tour

The tour we took was the basic tour “The private and representative rooms of Emperor Charles IV.” We would have liked to take the “The sacred rooms of the castle with the Chapel of the Holy Cross,” a.k.a. the “exclusive tour,” but that’s not available in February.

Our tour guide tried her best to fill us in on what we were missing from the exclusive tour, making use of a scale model of the castle, but it wasn’t the same. I would have liked to see these chapels:

A third tour is also sometimes available: the “Great Tower View.” This one goes up the Great Tower but does not include the Chapel of the Holy Cross. Instead, it includes the top of the tower to see the view.

I’ve seen a lot of castles in my travels and this one struck me as UNESCO-worthy, just based on the beauty of its architecture, the grandeur of the site, as well as what we were told about the opulent chapels we didn’t get to see.  So why isn’t it a UNESCO site?

The castle was rebuilt in Gothic style in the 15th century, then again in the 16th century in Renaissance style. Those reconstructions weren’t a problem.

The real issue is the last reconstruction, done by architect Josef Mocker in the 19th century “in the spirit of purism,” to quote the Karlstejn website. Apparently, its present-day appearance – a typical fairytale castle – isn’t true to the earlier reconstructions. Mocker’s “purism” isn’t pure enough for the UNESCO designation.

People usually take a day trip to Karlstejn Castle from Prague; it’s not far away. You can take, for example, any of these half- or full-day tours.

From Prague’s central train station, you can take a train directly to Karlstejn in about 40 minutes. Getting off at Karlstejn, find the nearest bridge across the river, which will bring you to the beginning of the road up through the village to the castle. It’s about a half-hour walk uphill from train station to castle.

If you decide to go on your own, here’s some advice, culled from my three attempts to see the castle using a rental car:

These hours are when the first and last tours go:

Tours are offered in Czech, English or German.

The basic tour does not need to be reserved ahead unless you’re booking for a whole group. Neither does the tower view tour.