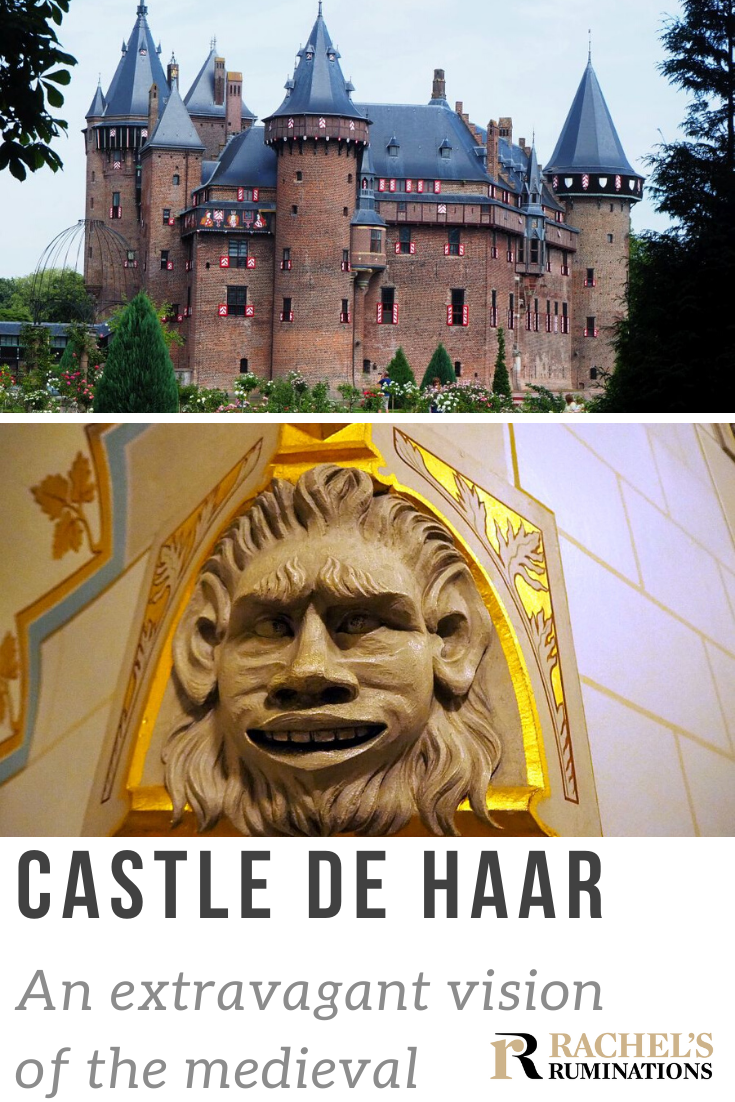 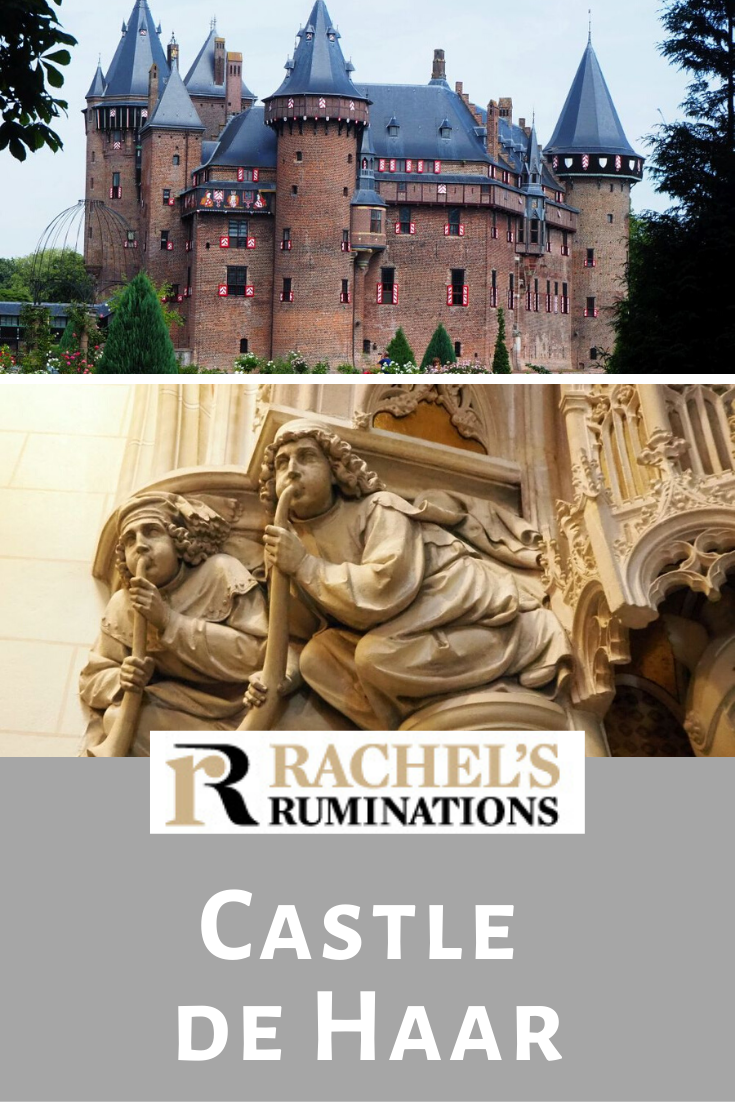 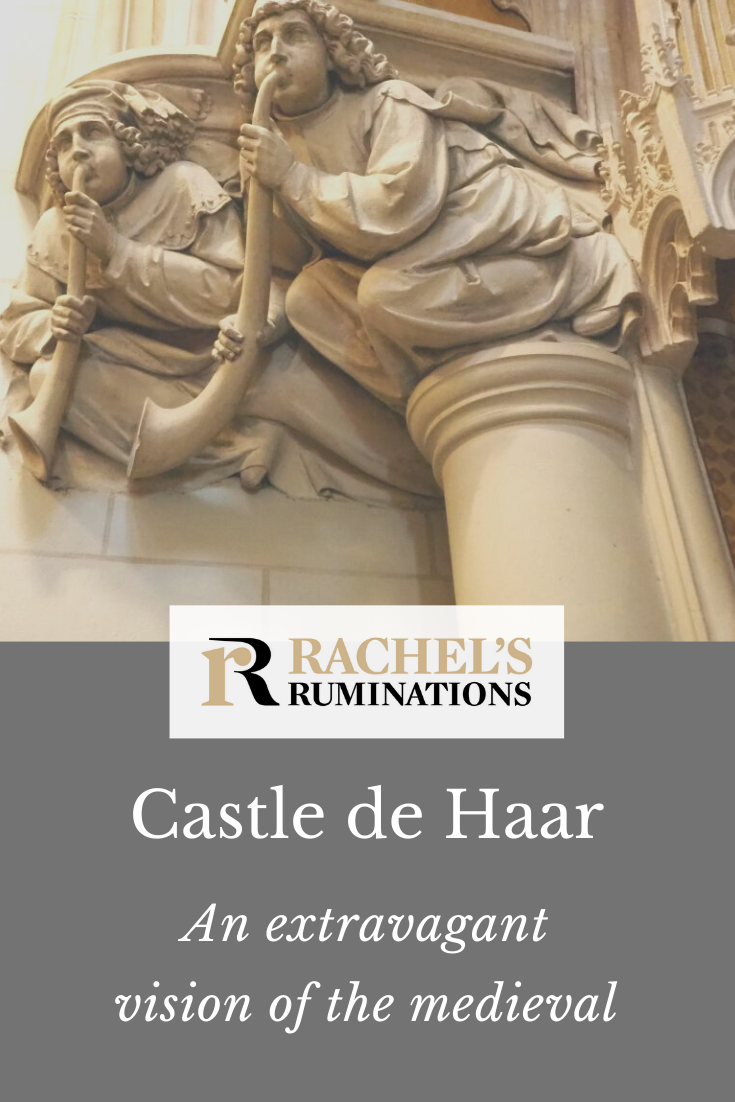 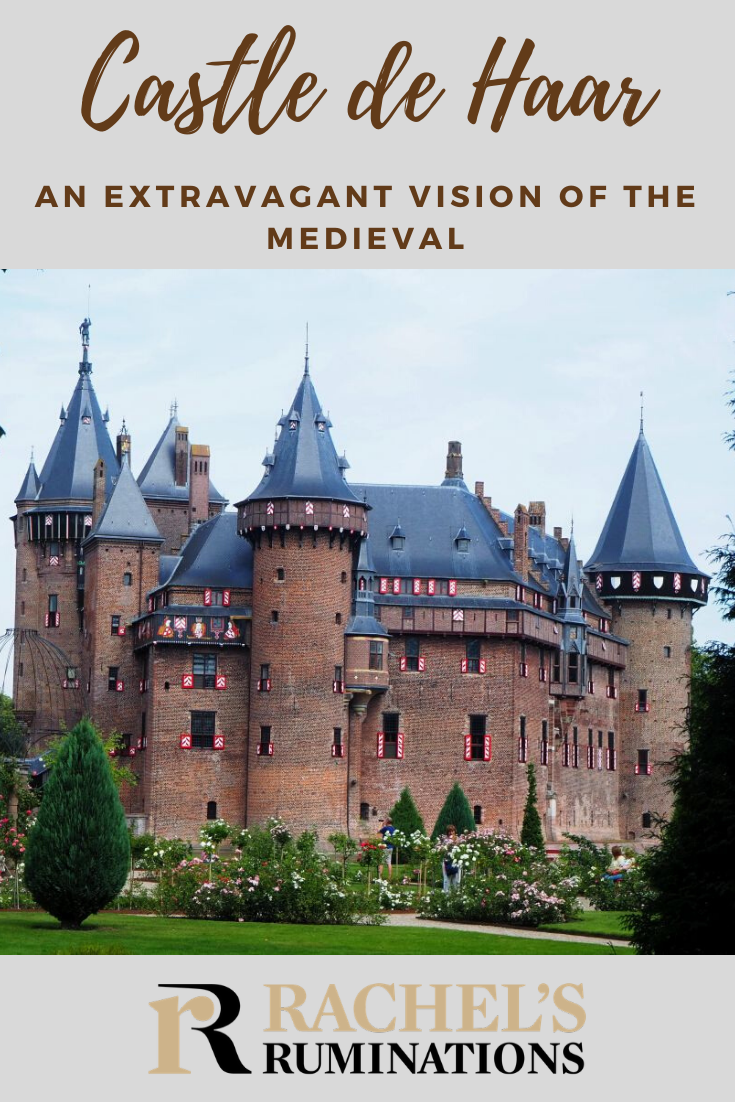 Castle de Haar is one of the most fanciful castles I’ve ever seen, if you discount Sleeping Beauty’s castle at Disneyland.

It’s got a moat, a formal garden, towers and turrets galore. Stunningly ornate, especially inside, it’s a medieval princess’s dream.

No truly medieval castle ever looked like this, of course, even when new. In fact, Kasteel de Haar (Kasteel is the Dutch word for “castle.”) is a 19th century idea of what the ideal medieval castle should be.

The castle reminded me of Balmoral Castle, Queen Victoria’s version of medieval up in Scotland, and comes from more or less the same era. The difference, though, is that Kasteel de Haar still manages to be pretty in a way that Balmoral doesn’t.

To be fair, there is a kernel of the medieval in Kasteel de Haar. The first castle on this site, built in 1391 by the de Haar family, burned down in 1482. Some walls remained and were used in a 16th century rebuild. By this time the castle had passed to the van Zuylen family, but in the 17th century the castle was abandoned and gradually crumbled into ruins, while various branches of the van Zuylen family continued to pass ownership down within the family.

Etienne Gustave Frédéric Baron van Zuylen van Nyevelt van de Haar (What a name!) and his wife, Baroness Hélène de Rothschild, are the ones who finally decided to revive the castle. In 1890, they commissioned Pierre Cuypers to design it; he was already famous for his designs for the Rijksmuseum and the central train station in Amsterdam. It took 15 years to finish it, and I’ll describe the extravagant interior below.

First, though, I’ll continue the history: the van Zuylens wanted the castle to follow the contours of the original castle, but also wanted it to be a place to receive (and impress) their guests. They spared no expense, installing all of the newfangled gadgets of the time: electric lights, for example, hot and cold running water, central heating, an electric system, and an elevator.

Every August, and later, September, the van Zuylens held, essentially, a month-long house party. Family and friends came, of course, but also celebrities of the time: Gregory Peck, Liz Taylor, Brigitte Bardot, and Coco Chanel, to name just a few, passed through these halls. Opulent surroundings, extravagant meals, glittering celebrities: it must have been quite a month.

The van Zuylen family handed the castle over to a foundation in 2000, but with the proviso that they can still use it each year for a month, which they still do. These days, from the sound of it, it’s more a family vacation than a celebrity-focused extravaganza, but still, it’s not bad for a holiday home!

After admiring the fairy-tale exterior, I didn’t expect the inside to be different from any castle I’ve visited that’s still furnished to period. Take, for example, Craigievar Castle or Crathes Castle in Scotland, or Bran Castle in Romania or Burghausen Castle in Germany.

On the contrary, Kasteel De Haar may qualify as the most ornate interior I’ve seen so far. Every inch of the walls, floors and ceilings is crammed with detailed ornamentation: carvings, tiles, paintings of all sorts, everywhere.

On entering, we first came to what was originally the courtyard but is now covered with a grand arched ceiling. Seeing it was our first “wow moment.” So many details seemed to shout for our attention: the row of statues looking down from the balconies above, the stained glass and painted woodwork of the ceiling, the carved doorways, the prettily tiled floor. And that’s before even glancing at the furnishings.

The dining room holds a stunning made-to-order tapestry covering one wall and a monumental fireplace at one end. The table is set for a very chic dinner with tableware designed for the family and a gorgeous flower arrangement down the center.

The Great Hall is a dark, paneled room with clusters of heavy armchairs. Its wood beam ceiling sports detailed carving as does the monumental mantelpiece. A suit of armor and a sword collection serve as decoration. The various artworks dotting the room are either medieval-period antiques or later works “in the style of.” Either way, the sheer quantity is a bit overwhelming.

The same continues in all of the rooms that are open to the public: each is ornate in its own way. Even the stairway is accented with amusing carved details.

The bedrooms upstairs are somewhat less overwhelming but still ornate. They seem like they might have been comfortable to stay in.

Outside, the castle is surrounded by a stunning formal garden: all straight lines and not a leaf out of place. When we visited in August, the flowers were doing their best to push outside the lines, especially the roses. It was delightful to stroll the paths, enjoying the sheer variety of flowers as well as admiring the castle from all angles.

There’s even a herd of deer living on the castle grounds.

Do I recommend a visit to Castle de Haar?

I certainly enjoyed my visit; the garden might be worth visiting all on its own, with the imposing castle as backdrop. If I had to choose, though, I’d recommend Muiderslot, not far away, over De Haar. While Muiderslot is much simpler inside and out, it also fits the stereotypical castle image, with the advantage of being far more authentic.

Getting there by car: To drive there from Amsterdam in 30-60 minutes, depending on where you start from in Amsterdam, take the A2 south. Get off at exit 5 Breukelen and take the N401 for about 10 minutes. Turn left at the roundabout onto Portengen, which changes names to Gieltjesdorp. The road bends to the right and becomes Schenkeldijk and then, after you pass through a roundabout, Rijndijk. The castle is soon after that on the left.

Getting there by public transportation: This will take about an hour and a half. Take the train from Amsterdam Central Station to Utrecht Central Station. From there, take a “sprinter” towards Woerden but get off at Vleuten. Next, take bus 127 toward Kockengen and get off at the Brink stop in Haarzuilens. From there it’s about a 15-minute walk. You could also take bus 11 from Vleuten and get off at the Kasteel de Haar stop for a much shorter walk.

Alternatively, on Saturdays, Sundays and in the summer and Christmas vacations, bus 9 goes straight from Utrecht Central Station to the castle.

Admission: €17 for the castle and the park around it, or €6 for just the park. Free with a Holland Pass, which is worth buying if you are planning to visit a number of sights and museums within a short time. Parking is an additional €6.