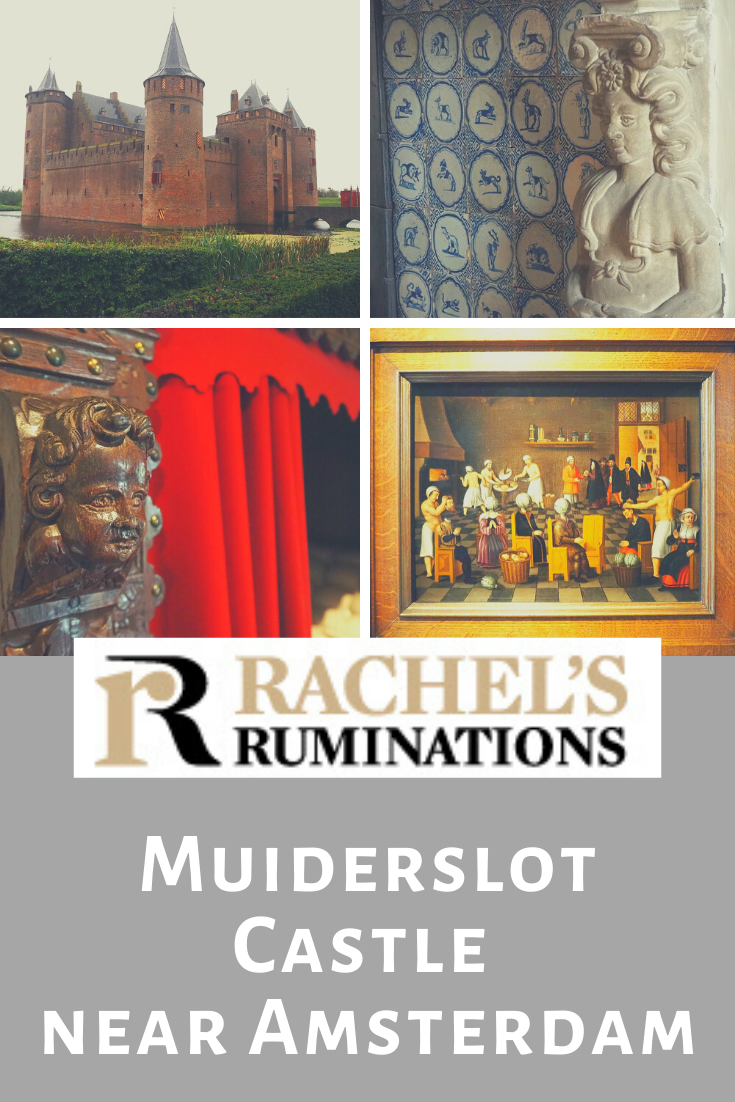 When you were little, did you ever draw a picture of a castle? If you were like me, the castle in your picture was square, with a tower in each corner, crenellations along the walls and a drawbridge to an arched gateway in front.

I’ve been to a lot of castles in my travels, but the one I visited recently near Amsterdam, called Muiderslot, is the closest to that child’s fantasy of a castle. (By the way, slot means “castle,” so calling it Muiderslot Castle is redundant. Lately it’s often referred to simply as Amsterdam Castle.)

Disclosure: I passed by Muiderslot on the last day of a sponsored week-long trip with Boat Bike Tours. (You can read my post about it here.) They planned each day’s route, but I decided to stop and take a good look at the castle. I received the trip for free, as well as my e-bike rental. However, my visit to Muiderslot itself was not sponsored.

And an additional disclosure: This article contains affiliate links. If you click on one and make a purchase, I will receive a small portion of what you spend. This will not affect your price.

Muiderslot stands alone within a moat. To enter, you have to walk over a bridge, probably a drawbridge when the castle was used for defense. Each corner boasts a round tower, pointed at the top. Thick walls with crenellations along their tops connect the towers.

Could this be more classic?

The original defensive castle was built for Count Floris V in about 1285. At the time, it was just thick walls (1½ meters thick in some places) and four short corner towers. Soldiers camped in the courtyard. It stands at the mouth of the Vecht River which was an important trade route at the time. Floris, though, was killed by his own nobility during a hunt about ten years later, and they destroyed his castle while they were at it.

Starting in 1370, the castle was rebuilt and expanded. About 200 years later it was further strengthened by adding additional fortress walls around it.

The most famous occupant of Muiderslot, though, and the one the castle’s audio guide refers to most, was Pieter Corneliszoon Hooft. As sheriff and bailiff starting in 1609, he went to live in the castle. He stayed there until his death 38 years later.

Hooft was mostly known for his poetry and plays, seen as a Dutch version of Shakespeare. He got lonely at Muiderslot, so he invited lots of thinkers, scientists and artists to come hang out with him, a sort of salon society that later got the label Muiderkring, meaning Muider circle. Lots of the big names of the Dutch “Golden Age” society spent time here.

Muiderslot passed into the hands of Amsterdam’s Rijksmuseum in the 19th century. They restored it to its 17th century atmosphere, to give visitors an idea of what the castle was like in Hooft’s lifetime.

You might also enjoy reading about these other castles:

When you enter the central courtyard of the castle, go to the little booth first, where the audio tour is available, included in the entrance fee. You can activate the recording in each room by holding the device near a sign and, once you’ve listened to the general story of the room, you can usually press more buttons to hear more information on some topics. The advantage of this system is that you can wander the rooms in whatever order you choose, rather than having to follow a prescribed path.

The dungeon looks, not surprisingly, quite grim: brick walls, floor and ceiling, and very little light. The day I visited it had been raining all morning, and stepping down into the dungeon meant standing in a shallow puddle covering most of the floor. It made it really clear what prisoners must have suffered here.

To spell things out even more, in the darkness I could make out a number of torture devices: stocks, for example, and chains. I didn’t stay around to figure out what they were all for, but a helpful sign on the wall spelled some things out, complete with pictures: branding for begging, tongue piercing for swearing, cutting off a hand for theft, etc. Apparently, according to an inventory from the Middle Ages,  Muiderslot had items of torture like a rack and thumbscrews.

The living spaces in Muiderslot are not fully furnished anymore, but have enough in them to get an idea of what it was like in Hooft’s day. Some of the original architectural features, particularly carved mantelpieces, remain. The original arrow slits have been replaced, though, with much bigger windows to let in the light.

The space would have originally been a living space, but a collection of armor is on view; most of it is protected in glass cases, with a few items that can be touched or even tried on. It’s amazing that anyone could even move with so much heavy metal on their body!

Called the Prince’s room because Prince Maurits of Orange stayed here, this room is set up as it might have been then. Prince Maurits was a leader of the revolt against Spain in the Eighty Years’ War. A heavy, curtained bed in the corner looks short; people slept half-sitting in those days. The table is covered by a rug and is simply set, right near the warmth of the huge fireplace.

This large room was where Hooft received his literary friends. The huge, ancient visitor’s book on the side table apparently also contains signatures by the current king and queen. The lord of the castle (Hooft while he lived there) administered justice here as well; hence the reason for having a dungeon. A table in this room was where punitive fines were paid, and the sound of the coins on the table revealed whether they were real or counterfeit.

This room is arranged as if it is still a working kitchen, albeit with fake food. The huge fireplace, the provision cabinets, the meats hanging, and so on, make it look realistic, though I’m sure the smells would have been much stronger in Hooft’s day.

Several rooms, including this kitchen, contain some exquisite Golden Age paintings from the Rijksmuseum’s collection. I doubt a working kitchen would have had such quality paintings originally, but the audio tells some interesting things about them in any case.

In particular, make sure to listen to the extra audio about the painting called “The Baker of Eeklo,” which depicts a 16th century legend set in Flanders. It’s an extraordinary image. Look closely and you’ll see that what is happening is that people’s heads are being removed and exchanged. They come in and have their head chopped off and replaced temporarily with a head of cabbage. While they wait, the bakers in the background knead a new head, add a glaze, and pop it in the oven, reattaching it when it’s done.

This legend may be the origin of phrases like “half-baked” and “hothead.” In the background of the image, it looks like people are returning heads to the baker; perhaps they aren’t happy with the results?

Also check out the painting called “De welvorzienen keuken” (The well-stocked kitchen), by Joachim Beuckelaer. Your audio tour will tell you about the picture within the picture: the scene in the background.

Apparently Hooft and his family only lived and worked in a few rooms of the castle most of the time. His bedroom has a heavy, carved-wood bed with curtains like the one in the Prince’s Room. I’m sure even with a fire in the fireplace these spaces were cold, so the heavy curtains would help.

From the tops of the towers, peering out of the arrow slits, you can make out the shapes of some of the original earthen walls that once defended this place from attack. Nowadays the river’s opposite bank hosts a marina full of pleasure boats.

The western tower (back left when you enter) leans visibly. It was propped up fairly recently using cement so that it’s stable, but it certainly shows its age. Climbing the western tower involves a spiral staircase: a clockwise spiral going upwards. This was in the interest of defense: the soldiers facing upwards had limited movement in their sword hand – the right hand – as they tried to push upstairs, since their right hand was toward the center column of the stairway. The defending soldiers had much more space to move their sword hands.

The southern tower (front left when you enter) is not round like the others: it’s oval-shaped. This allowed guards a wider view to watch for attack on the road to the castle. At the same time, the only way to access it is from the western tower because it has no staircase of its own. Again, this helped in defending the castle. Attacking soldiers would be put off their game if they suddenly had to turn around, run out and fight their way up the western tower in order to get to the defenders in the southern tower. And that would be tough because of that clockwise spiral.

The extra tower, above the entrance gate, has a “murder hole.” This is actually three holes right above the gate which allowed the defenders to dump stones or bricks on attacking soldiers.

Here are some more castles to read about:

It was raining when I was at Muiderslot so I didn’t spend any time in the garden. I can tell you, however, that the garden has been restored to more or less how it looked in Hooft’s time: neatly and symmetrically laid out.

The garden served both a decorative and a productive function, with gardens and orchards providing fruits and vegetables for the castle and flowers for their beauty. A herb garden provided flavor for the food and medicinal ingredients. Hooft’s plum orchard today has 18 different varieties of plum and must be breathtakingly beautiful if you happen to be there when the trees are in bloom.

If you’re driving, Muiderslot is in Muiden, about halfway between Amsterdam and Naarden on the A1.

Via public transportation, take the train from Amsterdam Central station toward Amersfoort Vathorst. Get off at Weesp. There, go to the neighboring bus station to get bus 110: Bussum Station via Muiden P+R. Get off in Muiden and walk about a kilometer to the castle. The trip should take about an hour.

If you don’t want to drive or figure out public transportation, you can sign up for a guided tour:

The I amsterdam city card includes admission to Muiderslot and might be worth buying if you want to cover a lot of sights and use public transportation for your visit.

If you have the Holland Pass, you can pay a gold credit to get into Muiderslot for free, or else take a 25% discount.