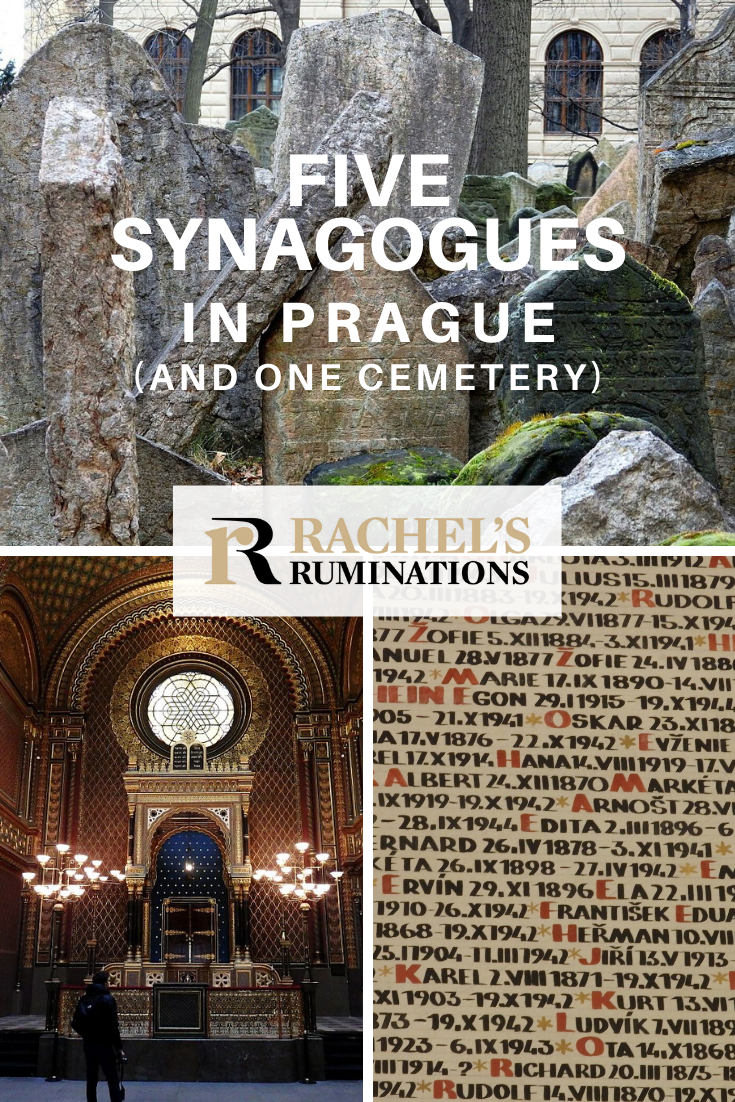 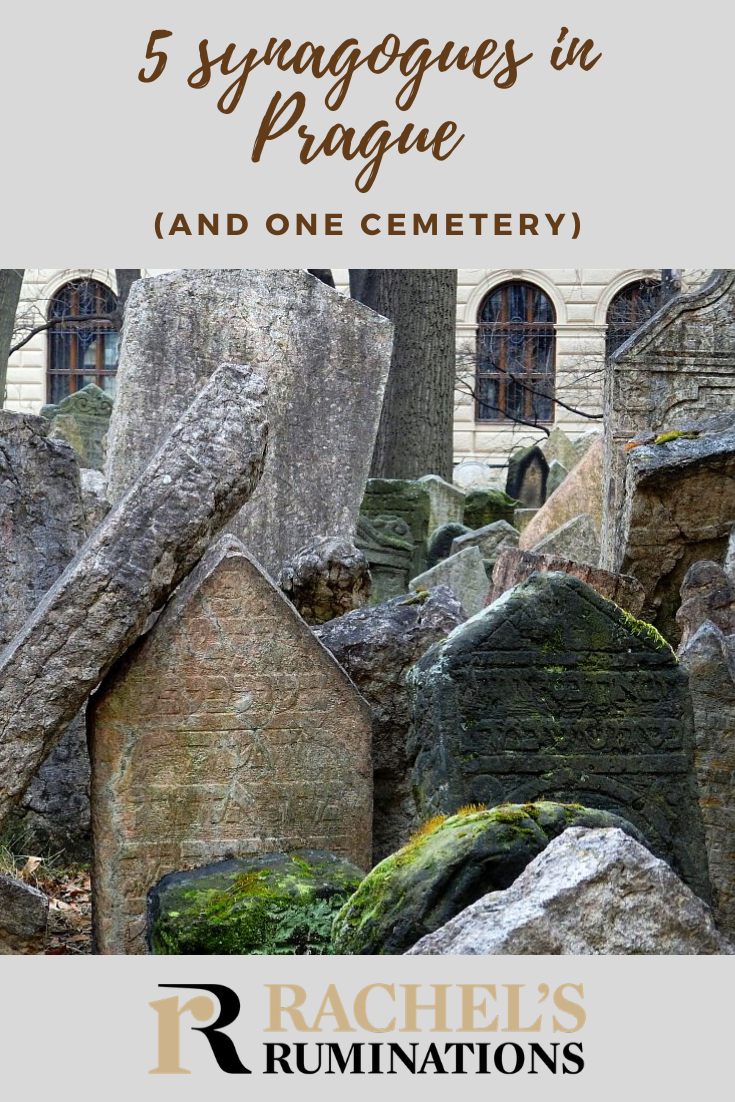 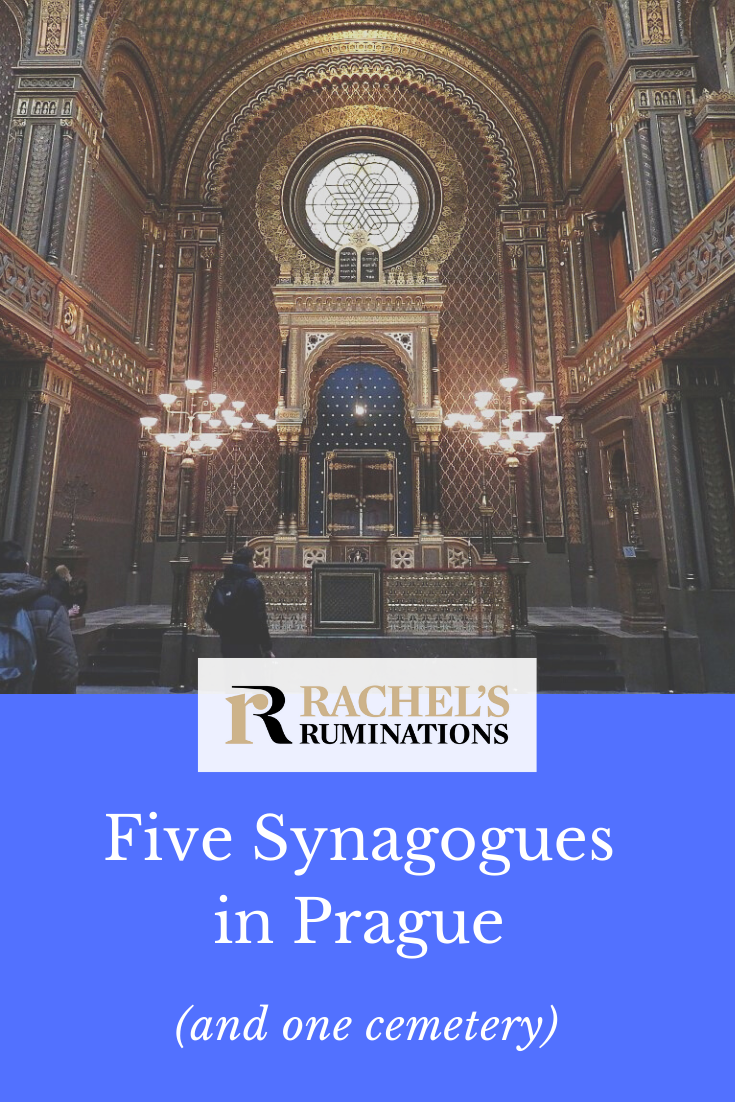 Five synagogues in Prague and a cemetery are what remains of Prague’s once-thriving Jewish neighborhood. Under the umbrella of the Prague Jewish Museum, they are open to the public, each serving a different function. Tourists can buy a ticket to all or part of a route through all the Prague synagogues.

Disclosure: This article contains affiliate links. That means I’ll receive a small commission on anything you buy through clicking the links.

Originally built in 1592, rebuilt in 1689 after a fire, and renovated in 1893-1905, the Maisel Synagogue is devoted to Jewish history in Bohemia and Moravia up to the 1780s. This is the most “museum-like” synagogue of Prague, in that it displays historical objects but also allows visitors to explore documents through touchscreens.

The Spanish synagogue is by far the most ornate of the Prague synagogues, and it’s also the newest. Built in 1868, the interior is done in a “Moorish” style.

Display cases around the ground floor and upstairs in what was once the women’s section tell the story of the Jews in Moravia and Bohemia from the 1780s on. It is a history of increasing civil rights and increasing assimilation, and of prominent members of the community like Sigmund Freud and Franz Kafka. The story ends with the Terezin ghetto, the Holocaust, and, briefly, Jewish history since 1945. Upstairs is an exhibit of silver from synagogues in Prague and the rest of Bohemia and Moravia.

Note: The Spanish Synagogue is, unfortunately, closed until the end of 2020. Do check out the exterior; it’s beautiful too!

Also explained here is the history of the Prague Jewish Museum itself. Many of the objects in the museum’s collection came from synagogues that the government tore down at the turn of the 20th century. Urban renewal and improvement of sewage and other services meant destroying the dilapidated Jewish ghetto in Prague.

The museum closed down when the Nazis took over. Starting in 1941, as whole Jewish communities outside Prague were being deported to concentration camps, Jewish leaders asked permission to start up the museum again with items from all over Bohemia and Moravia. The Nazis agreed. Most of the museum’s staff were eventually deported too in 1944.

I was astonished and saddened to read that Jewish leaders in Prague cooperated with the Nazi rulers, who clearly had a very different intention: presumably they meant it to become a museum about an exterminated people. Yet this collaboration between Prague’s Jews and the Nazis was what allowed all of these objects, as well as these five synagogues, to be preserved.

The Pinkas synagogue, dating from 1535, was made into a Holocaust memorial in the 1950s. The Soviet invasion in 1968 closed it down, but with the fall of the Soviet Union, and after a renovation, it was reopened in 1995.

I found this to be a very moving memorial. Not much is left of the original synagogue besides the building itself, the bima (the raised section in the middle where the torah was read), and the torah ark.

Instead, the walls are covered with names: almost 80,000 names of the Bohemian and Moravian Jews who died in the Holocaust. So many names, covering all of the walls. It gave me an overwhelming understanding of the sheer number who were killed. And if 80,000 is this many, how can you ever understand 6 million?

Upstairs, I couldn’t help but cry. There, in cases, hung dozens of pictures drawn by children at Terezin ghetto, where most of the Jews from this area were imprisoned before deportation. The community tried to maintain a sense of normalcy at Terezin, for the childrens’ sake, including makeshift schools. These drawings and paintings show everyday, ordinary scenes from the children’s lives or their imaginations.

Almost all of these young artists died in Auschwitz.

Next to the Pinkas Synagogue is the Old Jewish Cemetery. The people buried here are not victims of the Holocaust, who have no graves. This cemetery is far older, used by the Jewish community from 1439 to 1787. Because the city would not allow the Jews to expand the cemetery, they had to improvise.

To deal with their cemetery’s overcrowding, the Jews of Prague simply buried their dead on top of earlier graves. They would remove the gravestones, add a layer of dirt, and place both the old and the new stone on top. This continued for centuries. For this reason, the graveyard is higher than the surrounding streets, and the 12,000 gravestones crowd and lean against each other. Visitors can walk a path through the cemetery, reading the stones (mostly in Hebrew). Many have decorative details; others, just words.

This neo-Romanesque building (1906) was home to the Prague Jewish community’s burial society. Their meeting room was upstairs, while downstairs was where the traditional washing of the dead took place. Paintings from the 1700s show the steps of the ritual.

If the rituals around the Jewish tradition of preparing and washing their dead interest you, you can learn about them in detail in the Ceremonial Hall. It was certainly more than I wanted to know!

If you’re interested in post-war Prague, read my article about 3 places to visit to learn about Communist Prague.

This synagogue was one of the most important and largest of the Prague synagogues. Today, as part of the Prague Jewish Museum, it houses an exhibit on Jewish traditions. I just skimmed the displays, since most of the objects were familiar to me, but it would be useful for anyone who doesn’t know the basics of Jewish rituals and beliefs.

As I was wandering through this synagogue, a man nearby, clearly an Orthodox Jew, judging from his clothing, began to sing. It was Hebrew so I don’t know if it was a standard prayer, or a song of mourning, or what. He sang softly, to himself, and I think he wasn’t aware that anyone was listening. I found the sad notes of the song charming, and wonderfully appropriate to the bittersweet feeling of this museum.

The only active synagogue remaining in what used to be the Jewish ghetto, the Old-New Synagogue is also the oldest, dating from the 13th century. It was always the most important, even after the addition of other synagogues in Prague.

Looking like it would have  in the Middle Ages, with a bima in the center, this building has the most atmosphere of all of the synagogues. Perhaps this has to do with the medieval architecture: vaulted stone ceilings and gothic arches. Or perhaps it’s the fact that it’s still in active use. The male congregants, traditionally, sat or stood along the walls. The female members were in an adjacent room, listening through an opening in the wall.

The Jerusalem Synagogue, a.k.a. the Jubilee Synagogue

If you’re counting, you’ll see that while I said five synagogues, this the sixth that I’m listing. The Jerusalem Synagogue is not part of the Jewish Museum collection. It was built in 1905-6 in the Moorish style, like the Spanish Synagogue, and has been in continous use, except for the war period, when it was used to store stolen Jewish property.

I haven’t been inside because when I visited it in February 2020, it was closed for renovation, but I’ve heard it is as beautiful inside as outside. Like the Old-New Synagogue, this one is in active use. It’s away from the others, on the other side of the old city.

Visiting the synagogues of Prague

A clever solution to the question of how to present a Jewish museum, the decision to use the five remaining synagogues in the old Jewish quarter to house the collection was brilliant. Each building is, in effect, a different wing of the museum. Except for the Old-New Synagogue, they’re not active synagogues anymore, and it would be a shame to convert them to some unrelated use.

Visiting the Jewish Museum in Prague

Tickets: You can buy tickets at the Information and Reservation Centre (Maiselova 38/15), the Spanish Synagogue (Vězeňská 1), the Klausen Synagogue (U Starého hřbitova 3a) or the Pinkas Synagogue (Široká 3).

The price to see all five locations (except for the Spanish Synagogue, which is closed for renovation until the end of 2020) is CZK500 (about €20 or $22), less if you choose not to see them all.

The Old-New Synagogue is open daily except Saturdays and Jewish holidays: November-March 9:00-17:00; April-October 9:00-18:00. On Fridays it closes an hour before Sabbath.

Have you visited Prague and seen the Prague synagogues? What did you think?

If you enjoyed this article, please share it! The image below is pinterest-ready!