You’ve probably heard of capsule hotels. First developed in Japan, capsule hotels keep costs down for guests by using the available space efficiently. Often stacked one above the other, the capsules are each the size of a single bed. You can’t even stand up in them, making them, as the comedian Jeanne Robertson (video below) makes clear, more like a casket than a hotel room.

The Yotel in Schiphol airport is not a capsule hotel, but has certain similarities.

For one thing, the general look of the place is clearly inspired by capsule hotels: a sort of 1970s version of “space age,” all curved lines and indirect lighting. 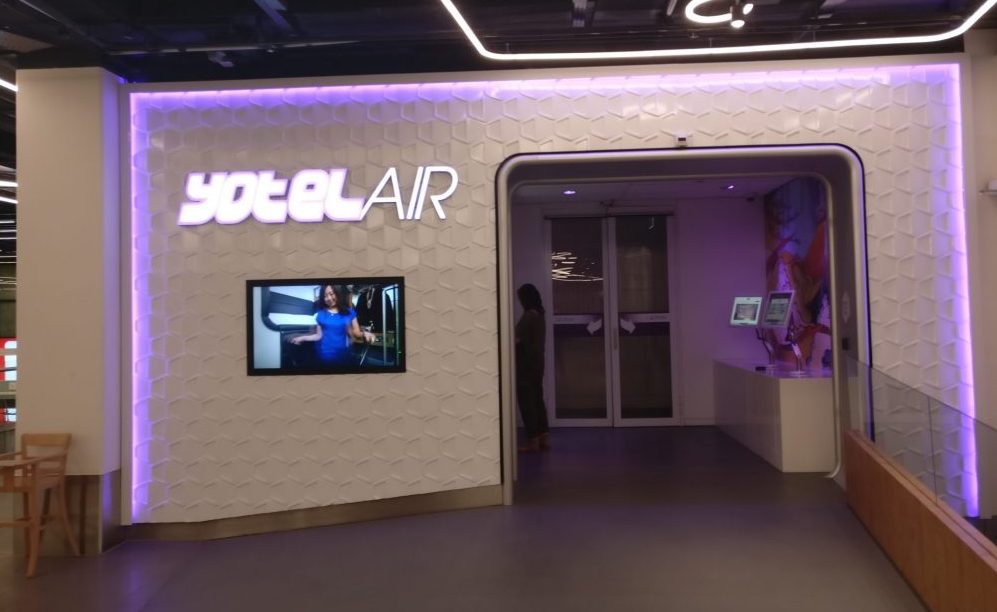 The entrance to the Yotel is next to a McDonald’s

Yotel offers actual rooms, not just casket-sized capsules. The catch, though, is that the rooms – called “cabins” – are absolutely tiny. I haven’t stayed in a room this small since the Jane Hotel in New York City.

The one I stayed in at Schiphol Airport has a twin-sized bed, a space of floor about a meter wide and about a meter and a half long, and a bathroom of sorts.

The capsule-like part is that these “cabins” are partially stacked. My cabin had three steps going up to the door. Once I was inside (an awkward fit, seeing as my rolling suitcase and I barely fit on the available floor, and the door opened inward), I had to pull out a shelf under the bed in order to climb up perhaps a meter and a half to get into the bed. The cabin next to me had three steps down to the door, and its bed was under mine. 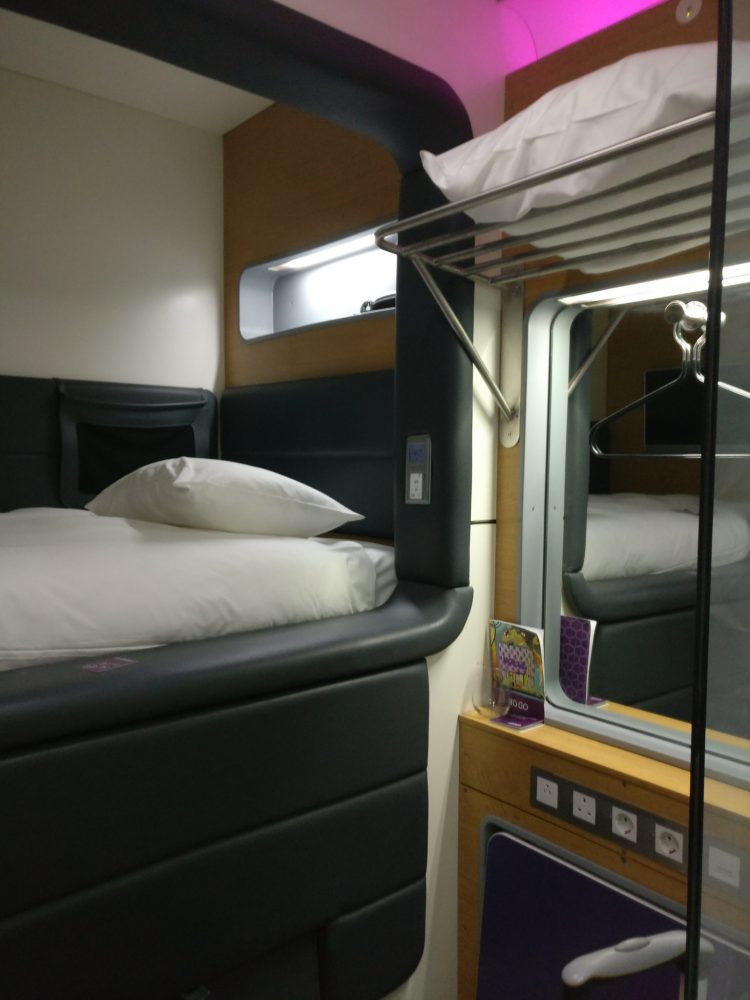 In this photo from the Yotel you can see how high the bed is. The pull-out desk is under the row of electrical outlets.

Did I mention how small this cabin is? The only window is in the door, looking out to the hallway. The effect managed not to be totally claustrophobic through clever use of mirrors, making the space look bigger than it is.

While a capsule hotel offers communal bathrooms down the hall, each Yotel “cabin” has its own bathroom. Calling it a bathroom, however, is a bit of an exaggeration. It’s more like a bath-space. The same length as the “cabin” and a bit less than a meter wide, it’s just a long narrow space on one side of the room, with a huge rain showerhead at one end, a sink in the middle of the wall, and a toilet at the other end. 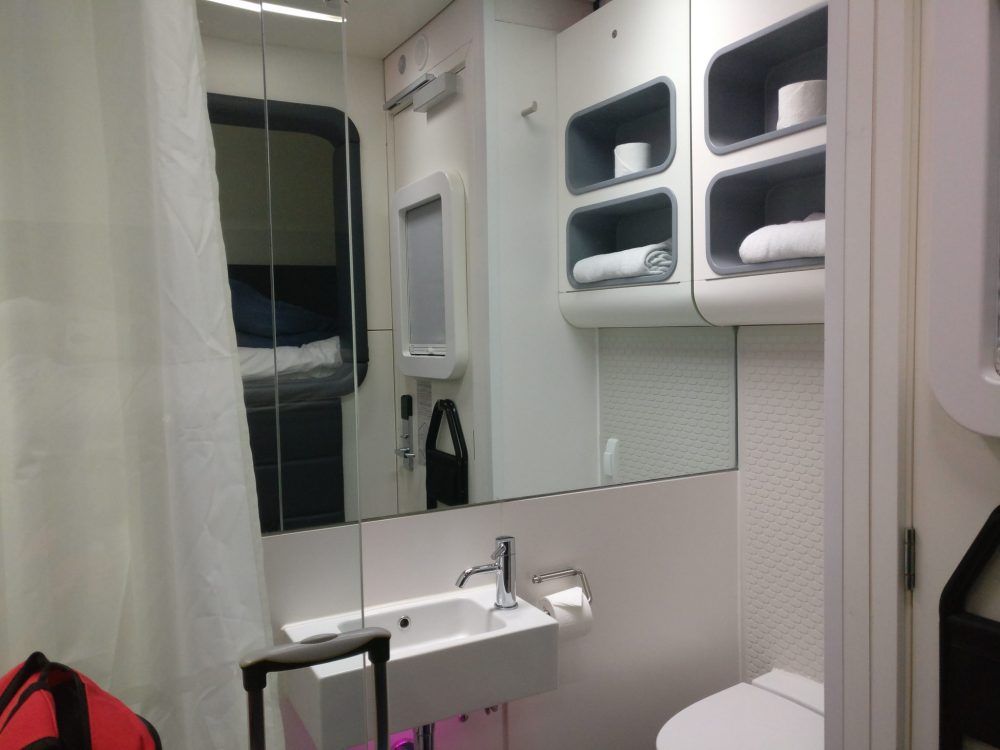 One end of the bathroom at the Yotel. The shower is on the wall opposite the toilet. In the mirror above the sink, you can see the window in the door and the black folding chair hanging below the window.

This bath-space is only partially separated from the bedroom. A glass wall extends from the end wall opposite the door out into the room and ends about halfway across. The only way to close the remaining gap is a shower curtain. Since it’s only a single room, I suppose it doesn’t matter that there’s no door to the bathroom in terms of privacy. But what if you just … you know … produced something smelly? There would be no way to prevent the smell from instantly pervading the entire cabin.

Below bed level, opposite the door, a desk mounted on the wall can be opened out. It cuts the available floor space in half, but a guest could certainly work there. A small folding chair hangs on the back of the door to use at the desk. A row of electrical outlets in several different formats allows guests to charge electronics.

I’ve already described how high the bed is. It has everything needed, fortunately, to not have to climb up and down too often. A TV hangs at the foot end and a shelf at the other, holding a remote for the TV. The bedding is good quality and warm enough.

The light controls are also within reach of the bed, and offer a surprising number of options given how small the room is. One button for “on” and another for “off” would have been enough for such a small space. However, I could set the lights in a number of other ways. A desktop light, a reading light above the head of the bed, and – I am not making this up! – a light for sex. 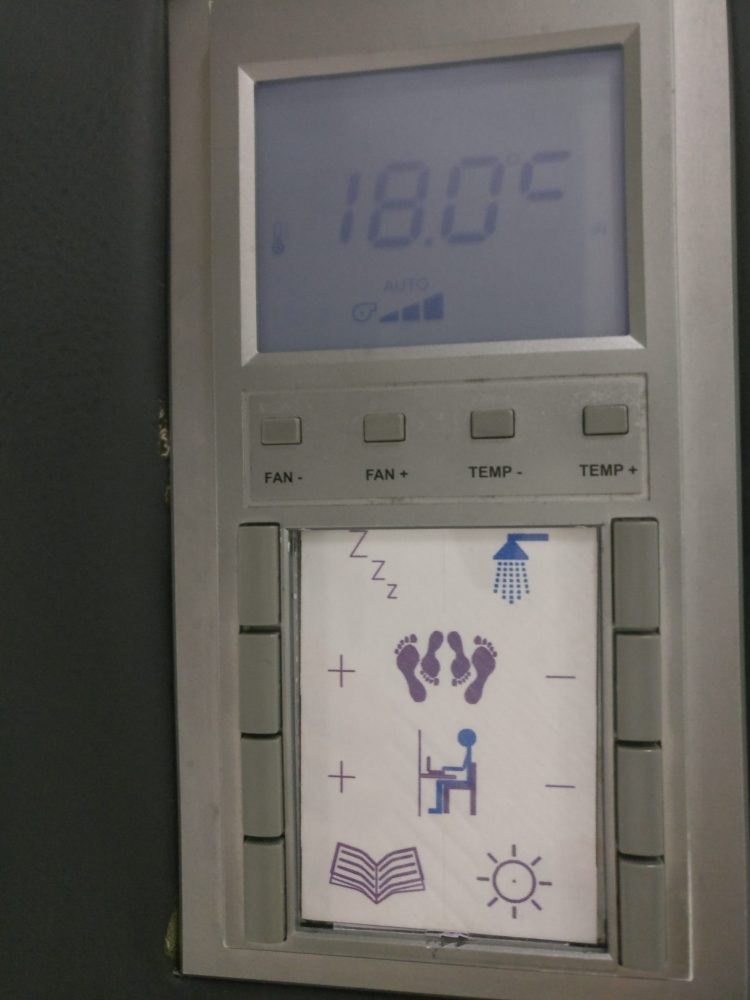 The lighting controls at the Yotel

Pushing the sex button revealed a pinkish-purple light up at ceiling level above the desk. Is pink light conducive to setting the mood?

I didn’t get a tour of the Yotel, but I didn’t need one. Walking to my room allowed me to peer into any room that wasn’t already occupied, since every room has one window that looks out on the hallway. Set in the middle of Schiphol Airport, this hotel has no windows facing outdoors at all. The windows on the hallway are pretty pointless, seeing that guests have to close the window shade as soon as they check in, if they don’t want every single guest looking in at them as they pass by.

The double rooms, I could see, had larger beds and a bit more floor space, as well as a bigger window, set in a wall rather than in the door itself. Waiting for their next guests, the beds were folded so that they resembled couches, and can be flattened at the touch of a button. 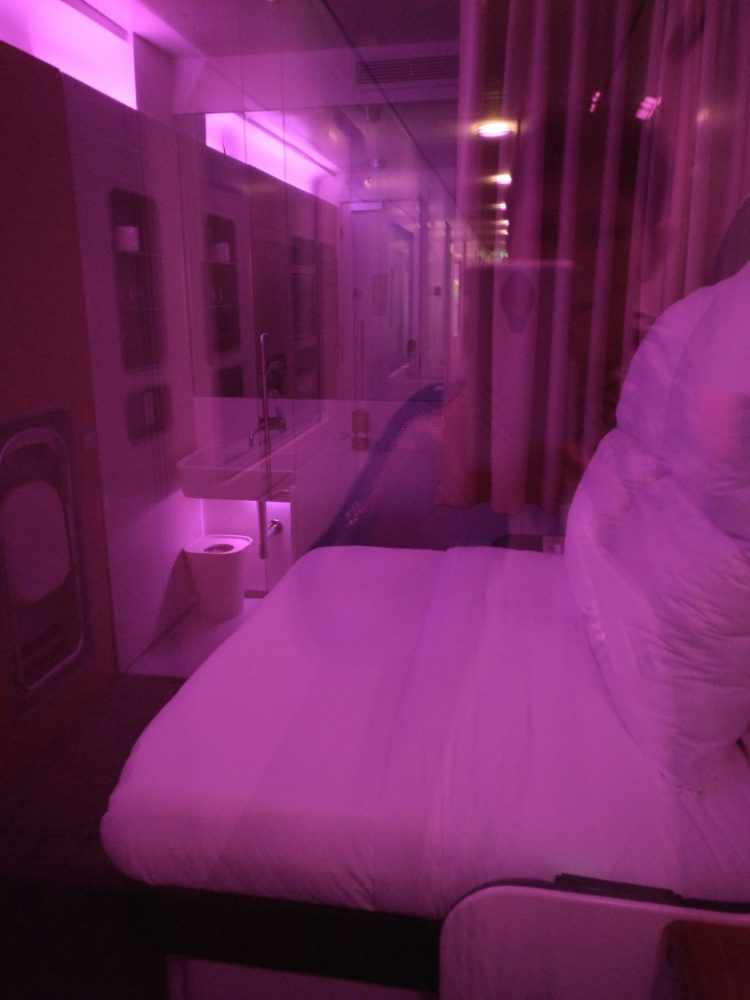 A double room in the Yotel, as seen through the window from the hallway. The sex light is on.

If you have a) a very early flight and b) only carry-on bags, it would be worth staying at Yotel. Its location – despite the lack of windows – is its main selling point: it is inside the airport building and after security. So you can check in on line, go to the airport the night before your flight, go through security, and sleep at the Yotel. In the morning, you can roll out of bed and go right to your departure gate.

For me, it didn’t work this way. When I booked it, I thought I’d be able to take all I needed in a carry-on bag. As I packed in the days before leaving, it became clear that I had been wildly over-optimistic: I would have to check one bag.

I called the airline (Transavia) to ask if I could check my bag the night before my flight. No, not possible. So for my 6:15 flight I had to get up at 4:00 in the morning, go back out through customs, check my bag at the check-in desk, and go back through security. It totally defeated the purpose of staying there in the first place.

On the other hand, it was the cheapest choice close enough to the airport to avoid getting on a shuttle at 4:00 in the morning. The next cheapest was Citizen M, just outside the terminal, which in the long run probably would have been the better option: I wouldn’t have had to go through security twice. If the flight hadn’t been so early, I could have stayed at one of the many hotels within a few kilometers of the airport, many of which are half the price of the Yotel, but require taking a shuttle bus to the terminal.

Have you ever stayed at a Yotel or a capsule hotel? What was it like for you? Would you recommend it?

Note: This is not a sponsored post. I paid in the normal way, in this case through booking.com.