When I entered the lobby and spotted the stuffed peacocks on the wall, mounted vertically with their faded tail feathers dangling, I knew the Jane Hotel wasn’t a run-of-the-mill hotel. 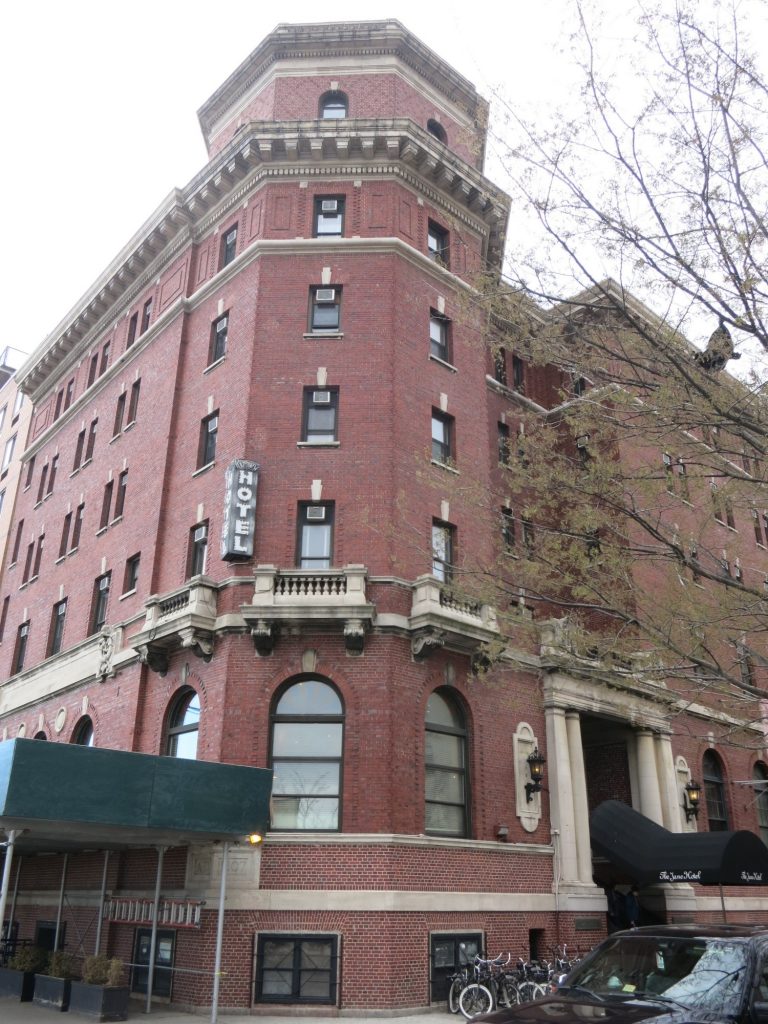 I had suspected it already when I booked the room. First of all, it was suspiciously cheap for New York City—I paid $115 a night—yet its ratings on the booking engines were too high for it to be a fleabag. And, oddly, the room was listed as a “cabin.”

The Jane Hotel was built in 1908, designed by the same architect responsible for Ellis Island. It was a hotel for sailors, which explains the nautical look. 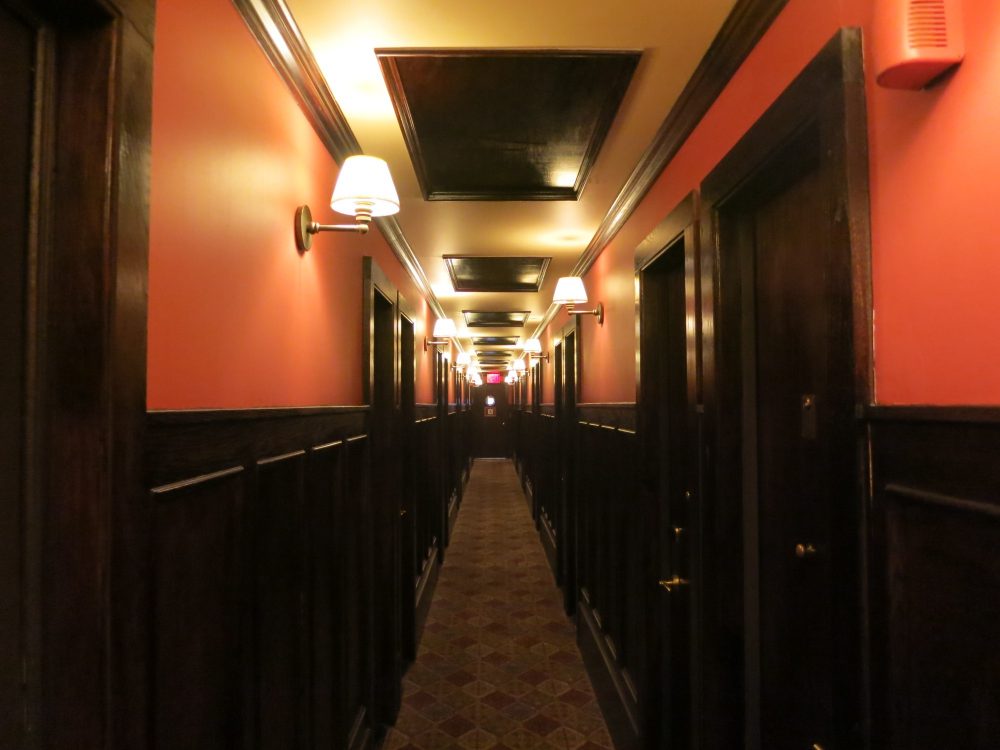 The hallway where my room was

My room at the Jane Hotel

My room certainly resembled a cabin on a ship. The single bed fit the entire length of the room, with about a meter of space to stand next to it. Fortunately, I’m not claustrophobic, and the large mirror on the long wall next to the bed helped to prevent me from feeling that the walls were closing in. Though I didn’t see one, I understand that the double cabins have bunk beds, fitting into the same floor space. Maneuvering in such close quarters with two people must be a challenge, but for me this small space was fine. There were shelves at the foot end of the room, and a large enough space under the higher-than-normal bed for my luggage. 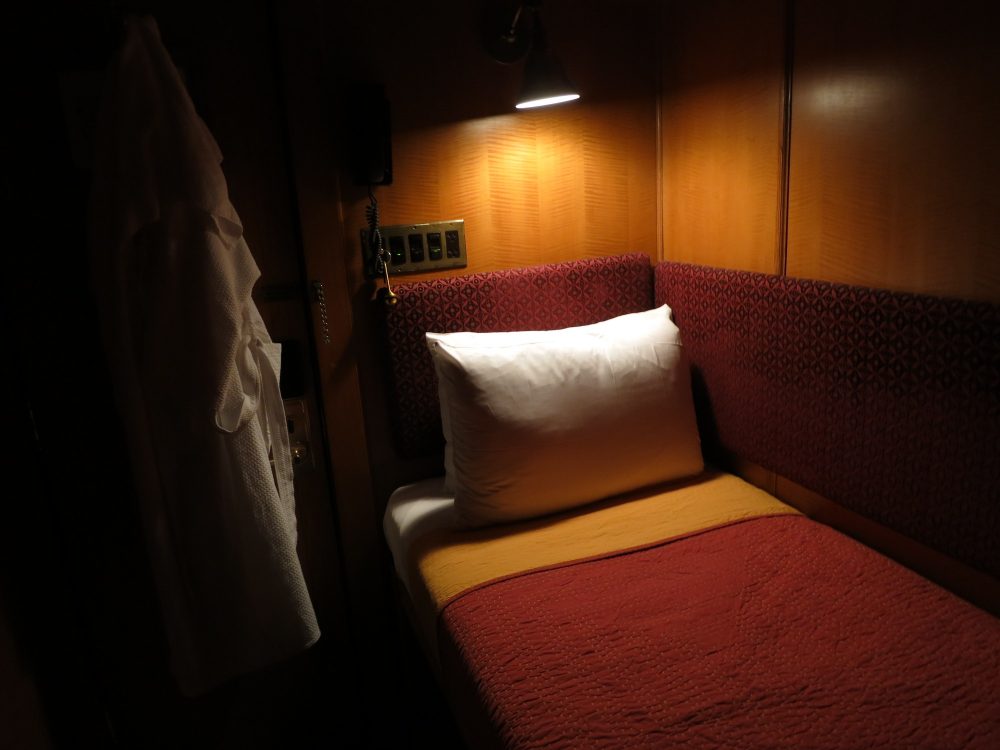 If such a tiny room had been shabby in any way, it would have put me off, but the room was done in what I’d call “high-quality vintage” style. In other words, there were brass hooks to hang my clothes on and period-style lights and doorknob. These weren’t antiques, but a good restoration. The wall next to the bed was upholstered in old-fashioned cloth and paneled above that. The sheets were high-quality, as were the pillows. The only concessions to modernity were a flat-screen TV on the wall at the foot of the bed and an air-conditioner up above the small window, operated by remote control.

I was pleased to see that the towels provided by the hotel were big and fluffy, and that a roomy bathrobe was included for trips to the toilets and showers down the hall. The bathrooms were also done to period, with black and white tiles and those knobby hot and cold faucet handles. I’m not sure if a rain shower fits the period, but I liked it.

If you’re planning a trip to New York City, check out my article “New York City on a Budget: Free or cheap things to do“!

Other observations on the Jane Hotel

Downstairs, there’s a pleasant restaurant, but the real highlight is the bar/lounge. A huge ballroom-like room features a high ceiling and chandeliers, as well as a stuffed mountain goat occupying the massive mantelpiece. Large portraits fill the walls and big leather sofas and overstuffed armchairs are arranged in cozy groupings around the room, except where the bar extends along one side of the room. Incongruously, a disco ball hangs from the center of the ceiling.

The bar is clearly popular, and not just with hotel guests. Unfortunately, I was told to stop taking pictures before I managed to get any good ones. I would have liked to be able to get into the bar during the day because it would have been a good place to sit and write or read. Without a proper lobby, the Jane Hotel does not seem to have any common space. 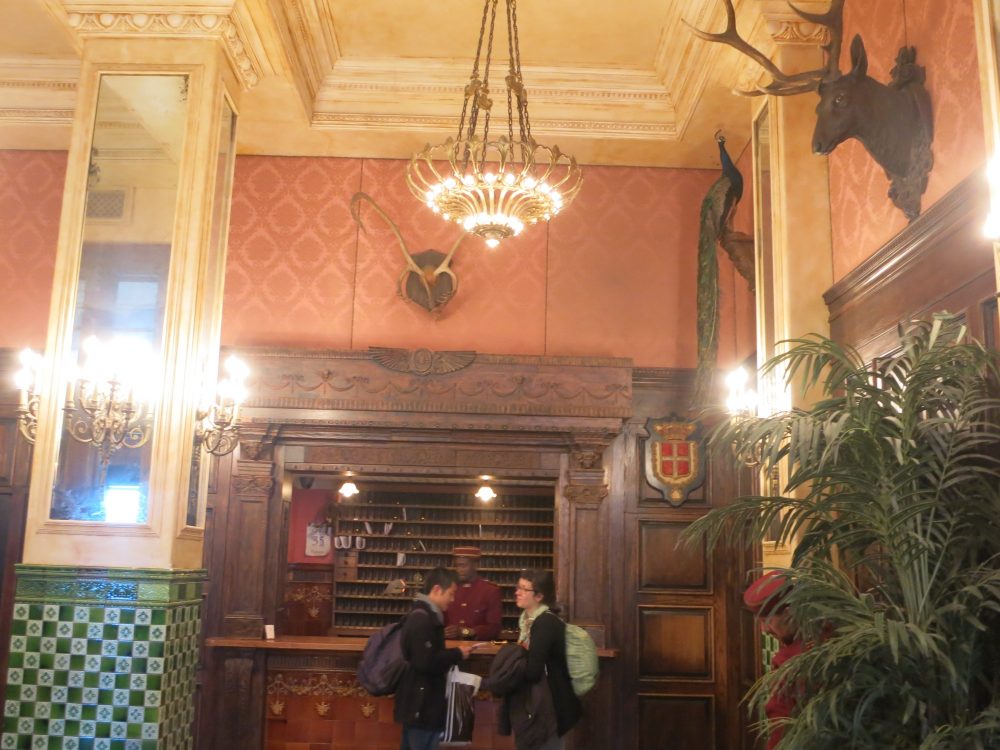 Instead, the reception area is really only for checking in and checking out. The employees wear old-fashioned bellhop’s uniforms, and greeted me politely as I came and went. The stuffed peacocks and other animal trophies observed silently.

The Jane Hotel sits on a residential street on the edge of the Meatpacking District, now rather gentrified. It overlooks the Hudson River, where the Hudson River Park is a great place for a walk or stroll. A few blocks from the subway, it’s also not far from the southern end of the newish High Line Park. 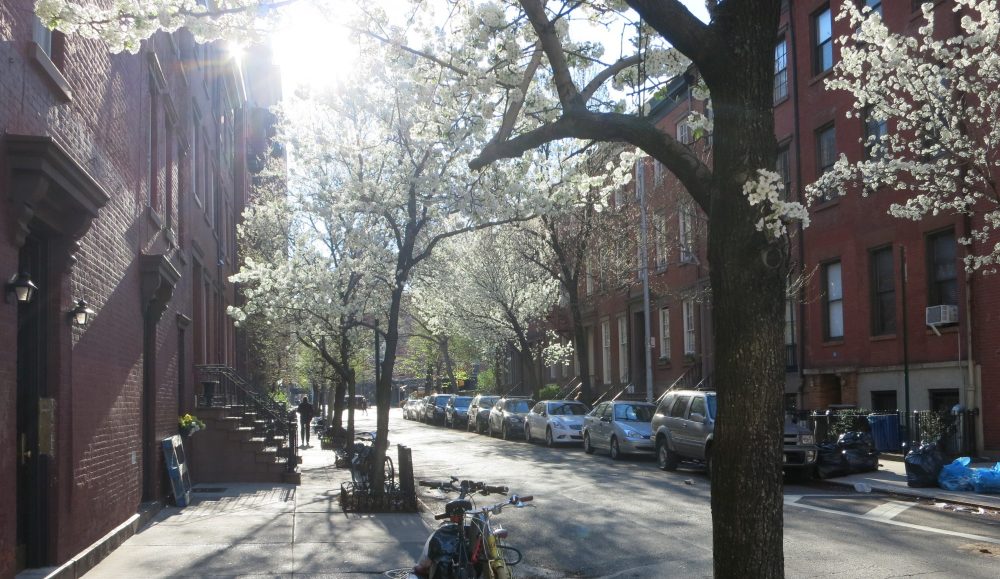 a street scene in the neighborhood of the hotel

Overall, the Jane Hotel is a smart concept: keeping prices low by offering tiny but high quality rooms. Without the renovation it underwent in 2008, it might have ended up at the flophouse end of the hotel spectrum, but it’s avoided that fate with flair.

(Note: I paid full price and did not receive any form of compensation for this review. I just liked the place!)