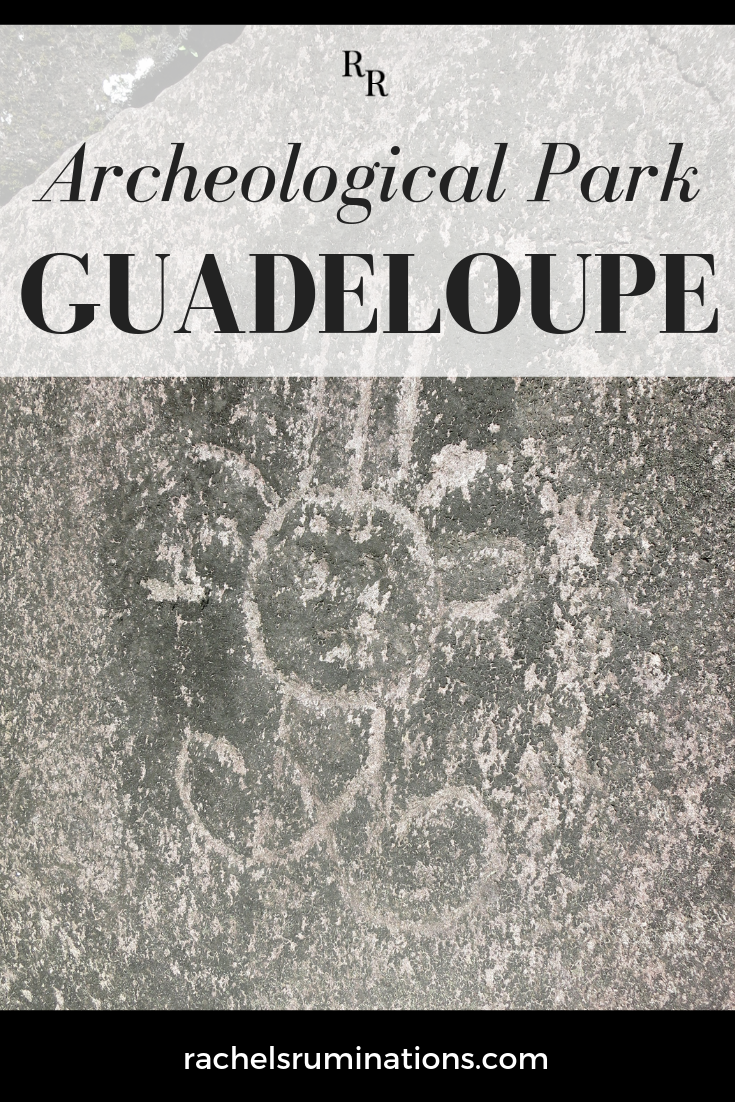 There’s not much left to show that the Arawaks ever lived on Guadeloupe. And it’s not completely clear what happened to them. One story is that they were all wiped out by the Caribs, who arrived in the 15th century.

Another story is that they coexisted with the Caribs, but not for long, since Columbus arrived on his second voyage in 1493. Then, like indigenous people everywhere in North and South America when the Europeans arrived, both Caribs and Arawaks were decimated by disease.

The Arawaks are gone, in any case, and the few surviving Caribs were eventually moved to nearby Dominica.

Since they would have lived in wooden structures, there are very few artifacts of this indigenous group. However, near Trois-Rivières, they left a series of rock carvings, which are now protected in Le parc archéologique des Roches Gravées, the Carved Rocks Archeological Park in Guadeloupe.

When I say “protected,” though, I just mean the land the rocks stand on is protected. The rocks themselves are exposed to the elements, as they have been for centuries, and they’re terribly worn, so there’s really not much to see.

In other words, there’s not much archeology to see in the archeology park in Guadeloupe. And I saw even less, because part of the park was closed for renovation when I visited. I hope that when they say “renovation” it means they’ll do something to prevent further deterioration of the carvings.

The carvings represent people, always with a simple hole for mouth and eyes. Some show the whole body; others just from the chest up.

Visitors are not allowed to stroll around the park, however; a tour is required. Our guide was a young, enthusiastic man named Nicholas. He assured us, repeatedly, that the carvings are far more visible at 11:00 than when we were visiting: our tour started at 13:00.

Nicholas more than compensated for the limited archeology by emphasizing the other side of the archeology park: it’s also a garden containing both indigenous plants and imports (Everywhere seemed to double as a garden in Guadeloupe!). He would scamper away from the path, climb rocks and pull a fruit off a tree, offering tastes to the group. I was surprised that the white substance inside a cacao pod, for example, is quite sweet and tastes a bit like melon, not chocolate. (Later, at the chocolate museum, I learned that chocolate isn’t made from the white part; it’s made from the hard cacao beans inside.)

Nicholas plucked a bit of grass by the side of the path and crushed it, releasing the smell of citronella. He scraped some bark off a tree with a rock and gave us bits to smell: cinnamon. He pointed out a calabash and several other fruits and seeds that I didn’t recognize (annatto, jack fruit and castor, among others) and explained their uses. For each one, he increased the entertainment value by having us guess first what it was.

He also told us a little of what archeologists know about the Arawak, which isn’t much. There are theories, apparently, about the meanings of the different carvings, which may have been related to religion. He showed us a large rock with basins carved in it. After first letting us guess what the rock was used for, he explained that the Arawak polished their stone tools there. The movement, using water and sand and rubbing the rock to polish it, dug out the basins over time.

If you go to the archeological park in Guadeloupe, ask at the reception about the walk along the coast nearby.

I only did a small piece of it, but it’s a beautiful, wild, rocky shoreline there, which you can enjoy entirely alone.

A visit to the Carved Rocks Archeological Park, Guadeloupe, won’t take more than an hour, and it’s free, but you should tip the guide a few euros.

If you decide to visit this park, don’t do it like I did. Instead, pack a picnic, including plenty to drink. Take an earlier tour, then spend the rest of the day exploring that shoreline path. Whenever you stop for a rest, you’ll have breathtaking scenery to enjoy while you eat and drink. Or you could combine it with a visit to the Banana Museum, which is also in
Trois-Rivières.

If you’d prefer to take guided tours, check out Get Your Guide’s offerings in Guadeloupe!