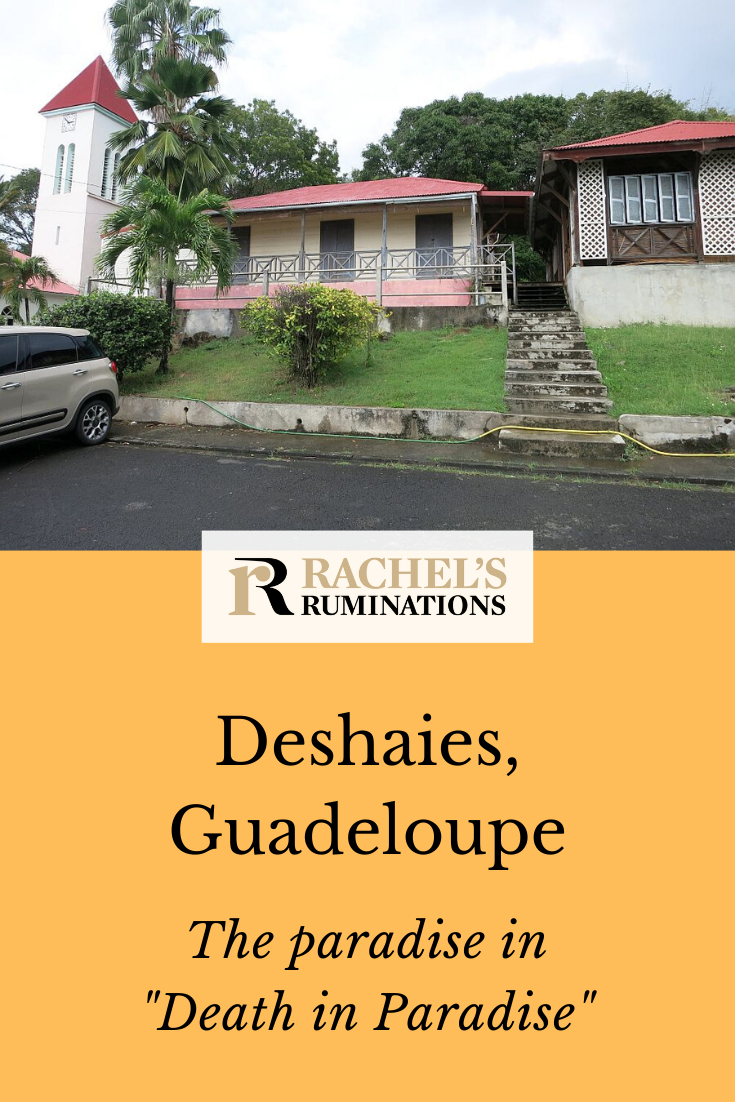 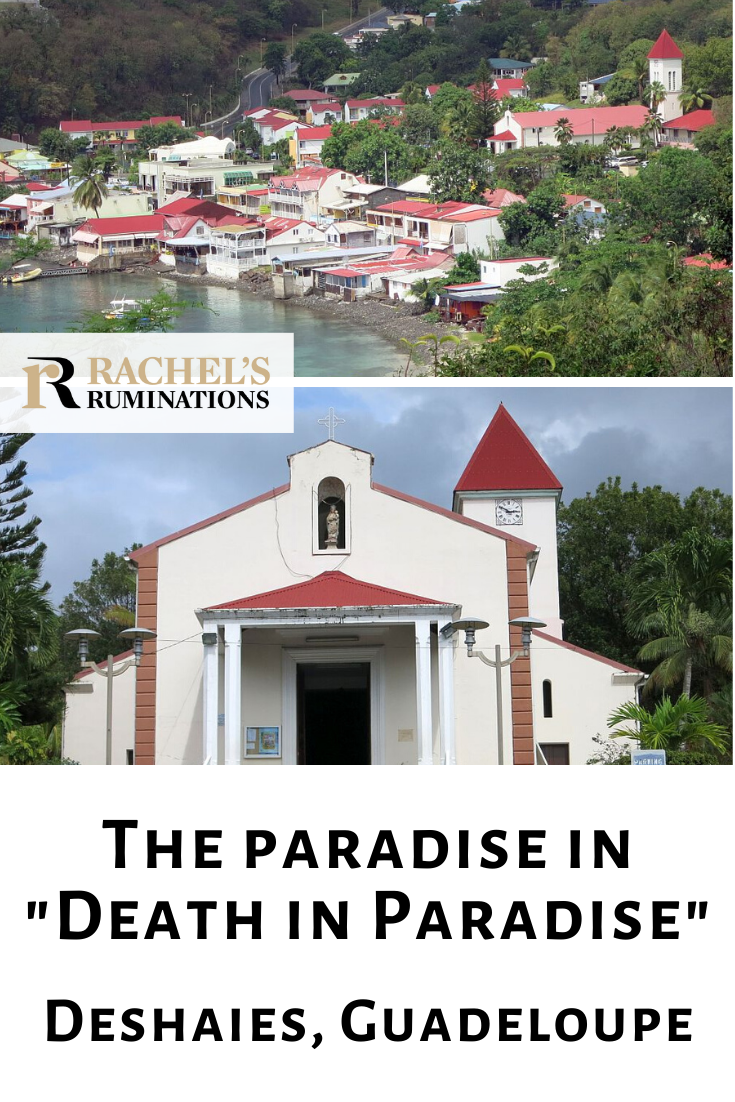 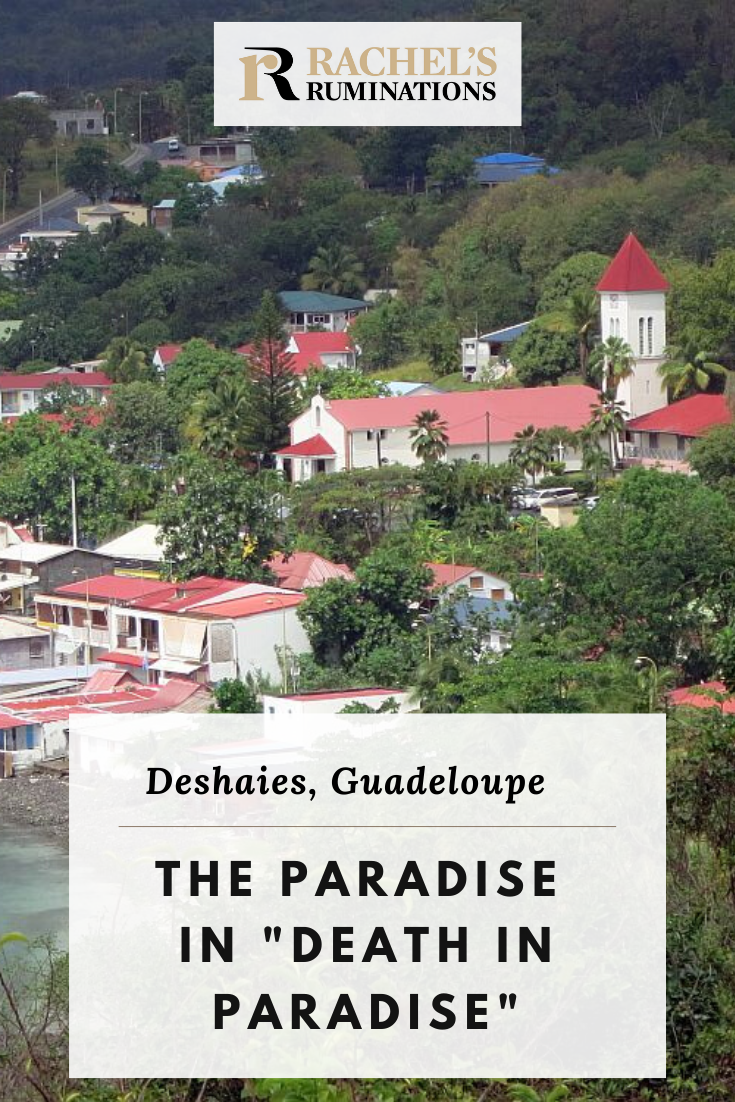 Visiting Deshaies in Guadeloupe, the setting for the BBC series “Death in Paradise” was a bit surreal for me.

Have you ever visited a theme park? Disney’s Main Street, for example, or Harry Potter studio, where the designers do their best to create a feeling that you’ve been transported to another place or time: a place or time you already know well?

That’s how I felt in Deshaies, yet it’s not an invented village built to entertain tourists. It’s an actual village that looks just as I imagined it.

Disclosure: This article contains affiliate links, which means I get a small commission on whatever you spend through the link.

Deshaies, Guadeloupe and “Death in Paradise”

Before I left for Guadeloupe, I wrote about how I chose my destination: because of “Death in Paradise.” I love the scenery in that show, set on the fictional Caribbean island of Saint Marie, and decided that it was as good a way as any to choose which Caribbean island to visit. That’s how I found myself visiting Guadaloupe and, in particular, this place that felt so familiar, even though I’d never been there before: Deshaies, where most of the show’s action takes place.

(Before I go on, a message for any of the cast and crew of “Death in Paradise” who might happen upon this post: I am not some creepy stalker. I have greatly enjoyed every episode of your show, but what I really fell in love with was the setting.)

Small buildings, some of them brightly painted, are arrayed along a peaceful bay, dotted with fishing boats. A church stands above the village on a rise. Serving as a clear reminder of our mortality, a huge cemetery looms on a hill, visible from pretty much anywhere. The cemetery, by the way, is usually carefully excluded from the filming of “Death in Paradise.”

To me, it was very clear why the producers chose Deshaies for the “Death in Paradise” set:

Deshaies seemed to me more touristy than any other towns I visited on the western “wing” of Guadeloupe, which is called Basse Terre, though it’s still not very touristy. It’s home to a few more seafood restaurants than a village that size would have, with higher prices. Many of the shops seemed more prosperous than the average. But you’d have to go to the eastern “wing” of the country to find a truly tourism-oriented economy.

You might also enjoy these other articles about places in Guadeloupe:

I visited the restaurant featured in the show, which, in real life, is called Restaurant “Le Madras.” The wooden patio with a roof, right on the beach, was just as I “knew” it from the show. It looked just the same, if much less busy.

To soak up the atmosphere a bit, I ordered ice cream (passion fruit and guava sorbet, to be specific). The tiny waves lapped at the beach just below me. The chickens picked for food. Hardly anyone was around except for a few customers in the restaurant itself across the tiny street.

You can book your Deshaies accommodations through this booking.com link.

After my ice cream, I strolled up to the Catholic Church of Saints Peter and Paul, which is shown in the background of the show, but as far as I can remember it hasn’t been used for an interior scene yet.

Just where I expected to find it, right next to the church, was the building used in “Death in Paradise” as the police station. It was closed up, and there was no indication of what it is used for other than a filming location. I noticed, though, that the building next to it has window panes that have been painted onto wood shutters: the only remnant of the filming I came upon.

It was weird to see that so much about Deshaies matched the image in my head from watching “Death in Paradise.” Because of that, it was easy to think about the show as if it was real. I found myself thinking “If I lived in a town with so many murders, I would seriously consider moving away!”

To read about all the best things to do in Guadeloupe, read my Guide to Guadeloupe!

Deshaies is in the northwest corner of Basse-Terre, the western “wing” of Guadeloupe.

There is a bus system in Guadeloupe, both line buses and little jitney vans. Unless you have a lot of time, though, I’d suggest either renting a car or taking a taxi to Deshaies. I rented a car for my whole stay. Since Guadeloupe is a French territory, the roads and signage are just like in France, which gave me a feeling of familiarity. From the airport, a taxi will cost around €50 and take 45 minutes to an hour. Make sure the cab has a meter or negotiate a price before you set off. If you want to travel around a lot, a rental car will end up costing less than relying on taxis.

From the airport, take the N1 west to the N2, which will take you right to Deshaies.

Another option, though, would be to take this tour to see several of the filming locations. It includes transportation from your hotel or the airport, as well as lunch.

If you liked this post, please share it in whatever social media you frequent. The image below is perfect for pinning!