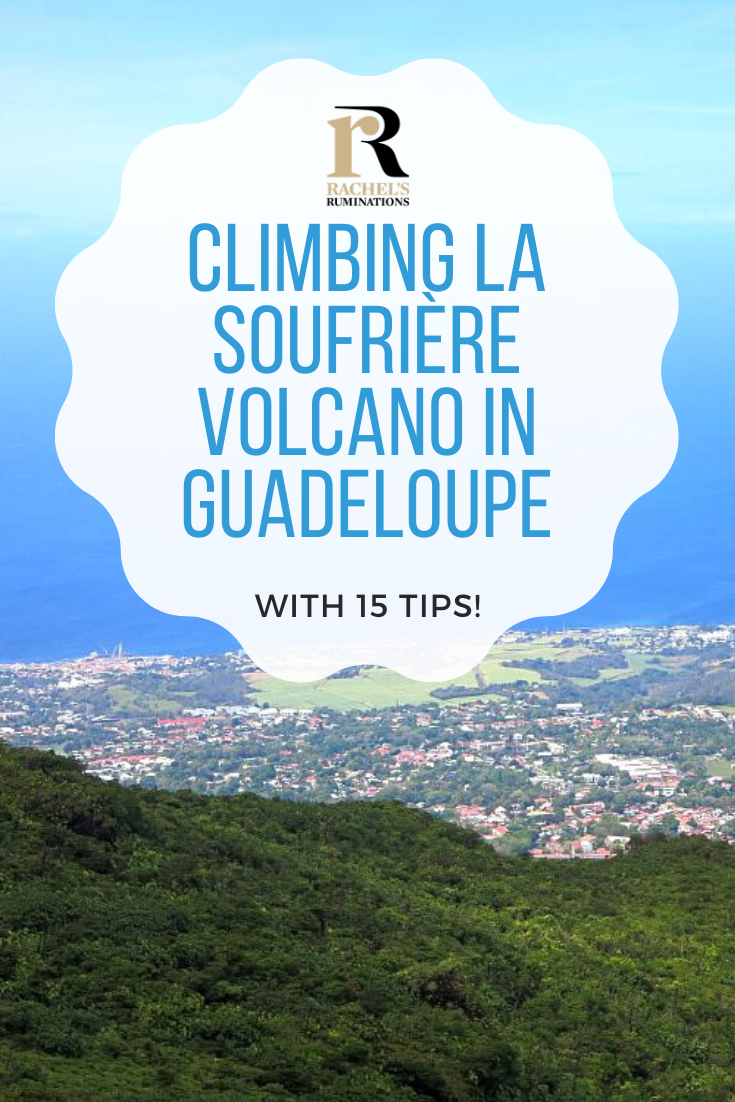 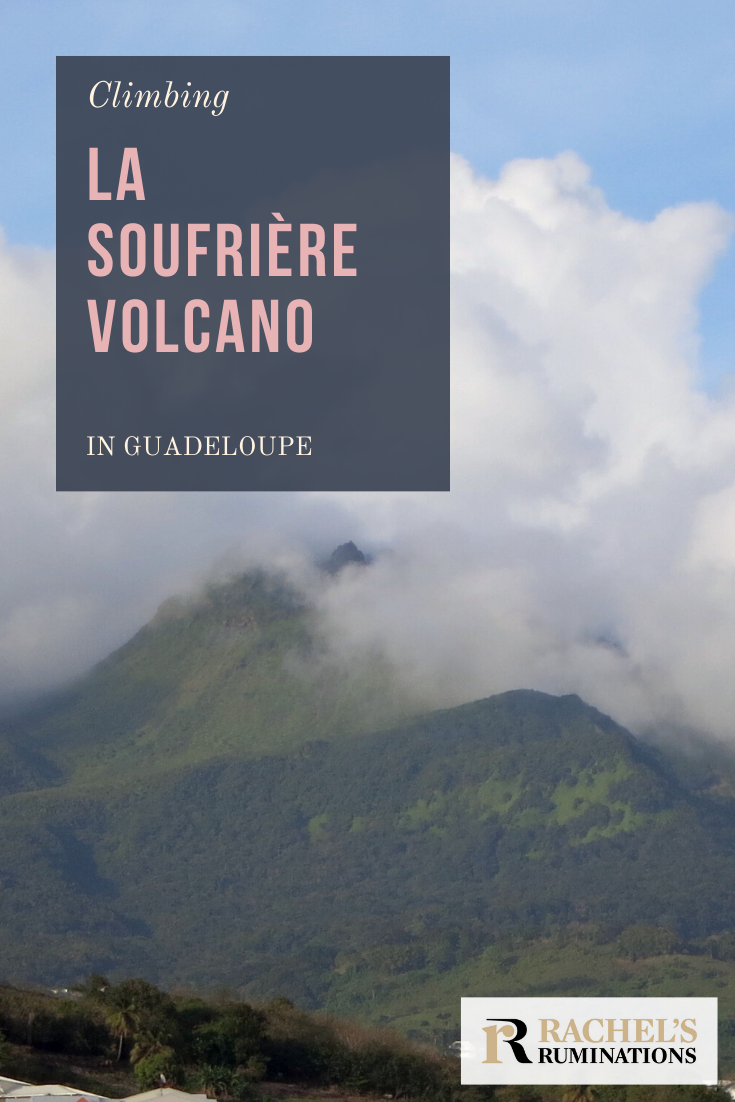 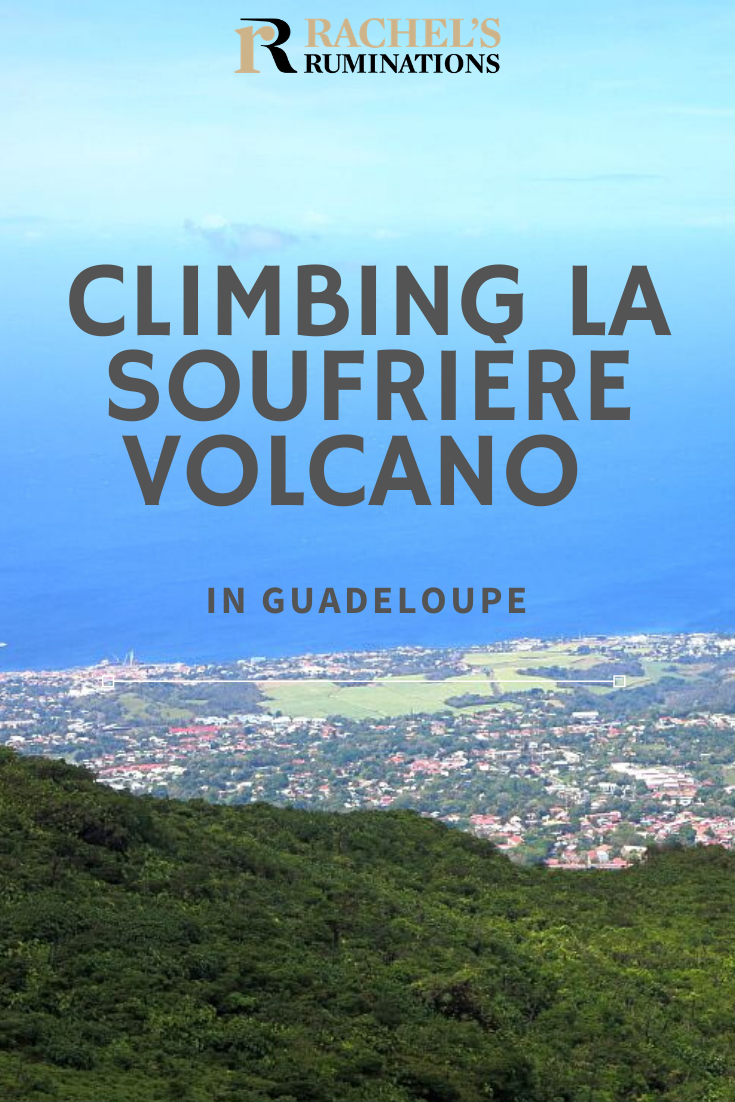 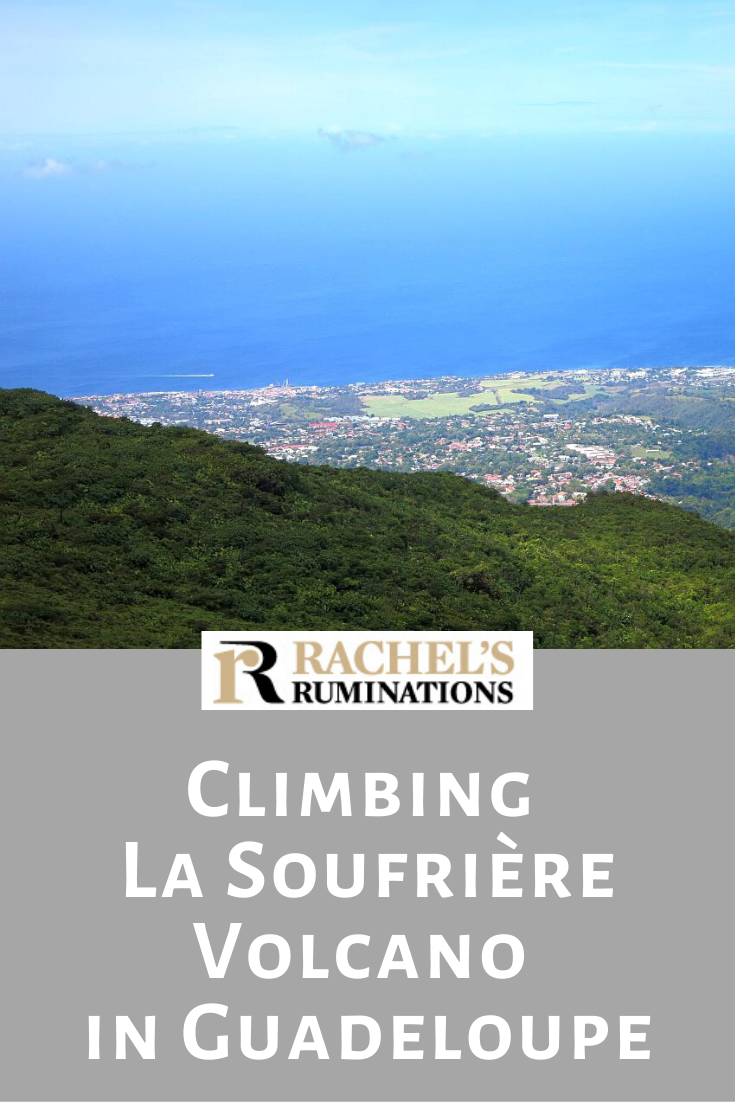 As you might have guessed from my description of walking to Le Carbet waterfall #2, I’m not much for walking or hiking. It’s not that I don’t enjoy a pretty view or like to catch sight of a colorful bird or picturesque waterfall. I do. It’s just that I’m terribly out of shape, and that’s because I’m just plain lazy. Most of the time I just can’t be bothered to go walking.

Except when I travel, that is. Then I want to see everything, and I’m perfectly willing to do whatever walking is necessary to achieve that.

La Soufrière volcano forms the centerpiece of the western “wing” of Guadeloupe (Guadeloupe’s main two islands form the shape of a butterfly.), and the focal point of the Parc Nationale de la Guadeloupe (National Park of Guadeloupe). It last erupted in 1976. The last earthquake, also associated with the volcano, was in 2004. In other words, it’s still active.

Nevertheless, visitors can walk all the way to the top. It’s a longer walk than before 2004’s earthquake, which damaged the last bit of the road up the volcano. Now, you first drive to a parking area below the volcano, called Les Bains Jaunes (950 meters elevation), walk up to the old parking area, called Savane à Mulets (1142 meters) and then start the climb up the volcano to the peak at 1467 meters.

In planning my visit to Guadeloupe, it became clear from my reading that I should hike La Soufrière volcano, and I’m proud to say I made it all the way to the top.

Three parts of the path

I experienced the three parts to the path very differently:

Part one of the La Soufrière volcano hike

The first walk, between the first and the second parking areas, is rated as facile: easy. And it is, relatively speaking. The trail is well maintained and rises steadily but not steeply. It winds through rainforest, and I noticed how the vegetation changed as I went up: the trees were very tall at Les Bains Jaunes, but gradually reduced in height and girth with increasing elevation. I think that change isn’t just about elevation, but also about the amounts of wind and rain up there.

Right away, I was huffing and puffing. I’m not in condition for walking steadily uphill. At this point I didn’t find it a problem, though. I was alone and had left Les Bains Jaunes at 9:30, so I had all day if necessary. Whenever I was out of breath, I stopped.

Arriving at the old parking area was a bit of a surprise. Suddenly, the trees just stop and there is only low, bushy growth. Apparently this area was all burned in the 1976 eruption. Seeing the scene and reading that information really brought home to me that this was a live volcano I was climbing!

The second part, most of the way up the volcano, is rated difficile: difficult. The trail is steeper and gets less and less well-maintained. I had to watch every step, since the trail was alternately rocky and muddy, and I often found myself planning several steps ahead.

I stopped a lot too because I kept losing my breath. Since I had to watch my step so much, it was good to stop anyway; it allowed me to admire the views.

Speaking of the views, they changed rapidly. I was at cloud level by this time, so sometimes I was socked in, but the clouds moved very quickly in the strong breeze and it could be a matter of seconds before the whole view opened up again.

The last part is also rated as difficult. It’s quite short—perhaps ten to fifteen minutes—but this part involves actual climbing. It’s not bad enough to need ropes, but I had to use my hands as well as my feet to scramble up the rocks. The wind up there was very strong as well, which didn’t help matters. I tried not to think about what would happen if I injured myself in such an awkward spot…

Knowing that I was almost there was what stopped me from giving up and turning back at this point. I was exhausted and regretting the whole thing, but determined to finish what I’d started. The air, by the way, had started to smell like sulphur, the odor of the gas escaping in several parts of the cone.

All told, the climb took me about two and a half hours going up. The signs at Les Bains Jaunes had indicated one hour and forty-five minutes. My slow ascent mostly had to do with my stopping to catch my breath or drink water.

At the top of La Soufrière

At the top it was incredibly windy. After the obligatory photo op at the elevation sign, I started down into the crater. There are trails around the edge too, but the wind was too much, in my rather nervous state once I was up there, for me to want to stay on the edge. There wasn’t much of a view other than down into the crater anyway: too much cloud.

In the crater, the cloud lifted enough for me to see La Porte de l’Enfer, or Hell’s Gate. Or, at least, I could see that there was a big, wide crevice and lots of sulphur-smelling smoke coming out of it. Opposite it, and also in the cone, was a small and very green valley. I suppose it formed in the last eruption, but because there’s no gas leaking at that spot, the vegetation has been able to grow back.

As I stood on the raised path between the two, within meters of both, conscious that I was standing in the middle of an active volcanic crater, I felt very uneasy, as you can imagine.

A few steps down the trail was a vent emitting smoke and making a strange sound. It was fenced off because, according to the warning signs, it produces toxic gases. Unfortunately, the wind noise in the video below masks the sound the vent was making. It resembled the sound of a car passing at high speed.

I’m not sure which was harder: climbing up or climbing down. On the way down I didn’t get out of breath, but I was so tired from the climb up that my legs felt like rubber. When I’m that tired, I tend not to lift my feet as much, and I stumble. Up there on the mountain, I stumbled a lot.

I was well aware that I could really hurt myself by twisting an ankle or by falling, so I had to make the effort to walk/climb slowly and be aware of where I planted my feet. I wasn’t too worried, though, in that there were other people working their way either up or down, so I wasn’t entirely alone. If I needed it, I could get help.

I did, however, manage to twist both ankles. Fortunately, they were both the kind of ankle injury that hurts as you’re doing it, but fades right away. I could “walk them off,” in other words.

It took me about an hour and 45 minutes to reach the bottom. It should have taken an hour. My thighs hurt for days afterwards.

My advice for your La Soufrière volcano hike in Guadeloupe

If all of this is scaring you off, you might want to consider going with a tour guide. Here are some possibilities:

The advantage would be that you’d be stopping regularly for the guide to tell you about the volcano, etc., and also that you’d have help if you needed it!

Getting to La Soufrière volcano

La Soufriere is on the western half of the island, and the access road (the D11) can be reached from the small town of Saint-Claude in the southwest. You can park for free at the end of the road at Bains-Jaunes to start your walk. (If you’ve signed up for any of the tours above, they’ll give you a meeting point.) There is no fee to climb the mountain.