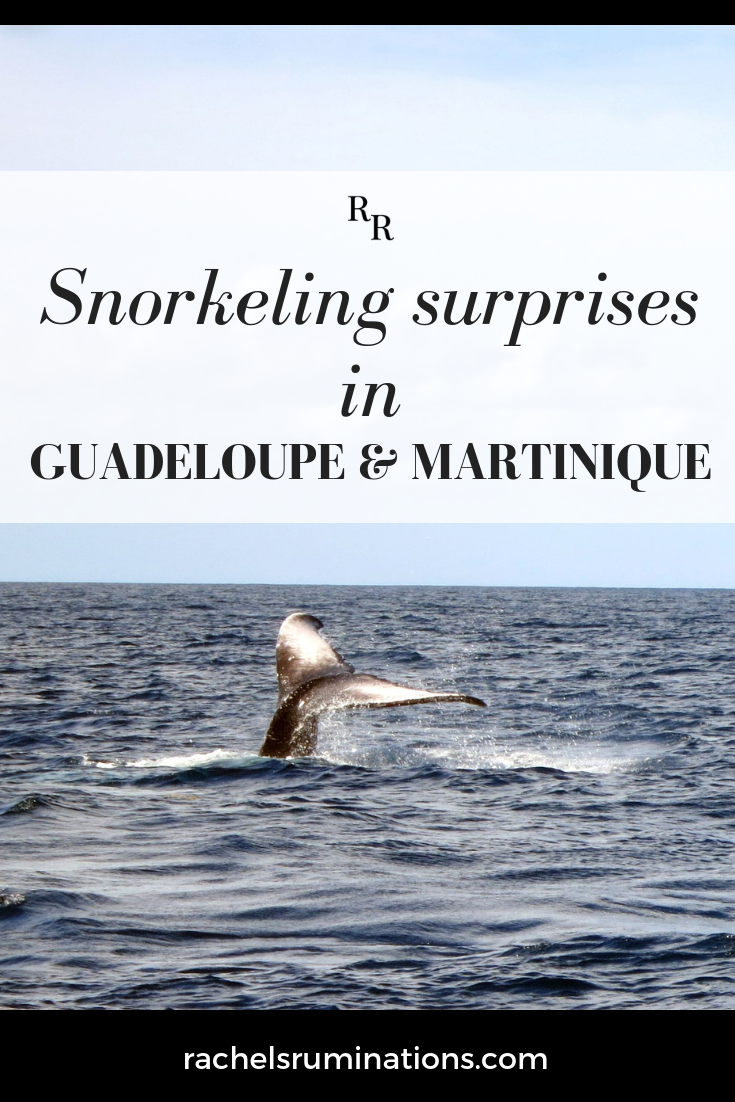 Sometimes an ordinary activity you’d do on any vacation can turn into something special.

On my recent trip in the Caribbean, I took two snorkeling trips, one in Guadeloupe and one in Martinique. I like snorkeling from a boat, since it usually means fewer people and better sights. All I expected was a pleasant, relaxed morning visiting two or three different places to see the fish and the corals.

It turned out that the snorkeling wasn’t as good as in other places I’ve been, such as Bonaire or the Red Sea. Nevertheless, these trips turned out to be special in a way that more than offset the mediocre snorkeling.

On the west coast of the western island of Guadeloupe, an area of sea has been set aside as the Cousteau Nature Reserve. That was the first stop on La Rand’eau’s half-day snorkeling trip, and that was why I signed up for it: to snorkel in the reserve.

But first we had to get there. After suiting up in wetsuits and claiming our snorkels, fins and masks, we—about eight of us—piled into a small motorboat. It was one of those open outboard boats that have a hard floor but the sides are inflated like tires. Most of us had to sit on the sides and hang on for dear life.

Once we got going fast, it was a very rough and wet ride, but exhilarating. I’m generally afraid of high speeds, but this was great fun, despite the battering I felt in my spine with all the jolting, combined with my general fear of losing my grip and falling overboard. It was loud, it was bumpy, it was wet, but I loved it. Below is a ten-second clip. I didn’t manage more because I wanted to go back to holding on with both hands.

We moored the boat off two small islands, called les îlets Pigeon, inside the reserve. The guide led us on a snorkeling tour around one of the islands. While there were some pretty fish—parrotfish in particular—the corals were not in good shape: many looked bleached.

Our next stop was Malendure Beach, a pretty bay with a bed of sand and seaweed. Our guide told us we might be able to spot some turtles and, indeed, we did. That was a thrill for me, since in all my snorkeling and scuba diving, I’ve never seen one clearly in the wild before. They were slow and moved in a ponderous way, but they were also quite shy, so spotting one usually meant driving it away.

There was one more stop to this tour, one I certainly never expected: a hot water swim. You may remember that I also climbed the volcano on Guadeloupe, which is still active and smells of sulphur. Some of the water that is heated by this active volcano drains into the ocean at Bouillant, whose name means “boiling.” The water, according to our guide, is harnessed for electricity, then released into Bouillant’s bay. We didn’t snorkel here, but it was fun to take a swim in the warm, suphur-smelling water, after being cautioned not to get too close to where the outlet is.

On Martinique, the snorkeling trip I chose included a promise that we’d see some dolphins. Apparently, there are dolphins all year, though the species varies depending on the season.

The problem with promising dolphins is its appeal to children. Sure enough, the Schéhérezade carried about 30 passengers, at least half of them children. When I saw all those children, many quite little, at the meeting point, my heart sank. I was going to spend half the day surrounded by the noise and whining and crying of all of these children. (As any parent knows, when it’s other people’s children, you’re much less tolerant than if they’re your own.) And I was afraid they’d spoil the snorkeling with their splashing and noise.

We sailed straight out from Fort de France toward a spot in the open ocean where the dolphins had been sighted. Soon we were able to spot the dorsal fins of a number of dolphins,  swimming in twos and threes.

If you’re planning a trip to Martinique, you might also enjoy reading about Fort St. Louis and the Rum Battle.

And that’s where we spotted something special: a humpbacked whale was swimming lazily along with the dolphins.

The whale’s appearance led to another surprise: quiet. All of the talking and fussing and general noisiness that so many small children in a small space can produce, simply stopped. Everyone just watched. Some parents talked about whales quietly to their children, many took pictures, but that was all: just a hush, children included.

The whale didn’t seem in a hurry. It stuck its back out of the water, spouted water with a funny breathy sound, and flipped a tail lazily from time to time. We watched: silent, fascinated, while the boat, its motor turned off, bobbed on the waves. It was magnificent.

Later, after the whale swam away and the spell was broken, we also went snorkeling, but, honestly, that didn’t really matter after the thrill of seeing dolphins and a whale. The tour organizer told me that they normally see whales in February, March and April. Yet this was the first time this year—it was late April—that they’d seen one.

A fast boat ride, turtles, a hot bath, dolphins and a whale. My snorkel trips turned out to be about other things than snorkeling, and that’s what made them special.

In case you were wondering, this is not a sponsored post. I paid full price for both trips.

The trip I took with La Rand’eau (the trip to the Pigeon Islands to snorkel, looking for hawksbill turtles, and a stop at the hot water area) costs €40 ($46). It is located on the N2, 3 km south of Bouillant in a small village called L’Anse Duché. This is in the middle of the west coast of the western “wing” of Guadeloupe. Don’t just show up, though. Contact them first through their website to book a trip.

My trip on the Schéhérezade costs €48. It leaves from Marina Pointe du Bout in Trois-Ilets in Martinique. That’s on the southern side of Fort de France Bay. You can take a ferry there from the city of Fort de France. In this case, you can book through the website or take the chance of just showing up, as I did. A number of such boats leave from the same marina, so I just went early in the morning and asked at the various booking offices at the marina until I found one leaving soon. There’s a beach nearby where you can hang out while you wait.

Have you ever taken a tour and ended up with something completely different than you expected? Add a comment below!