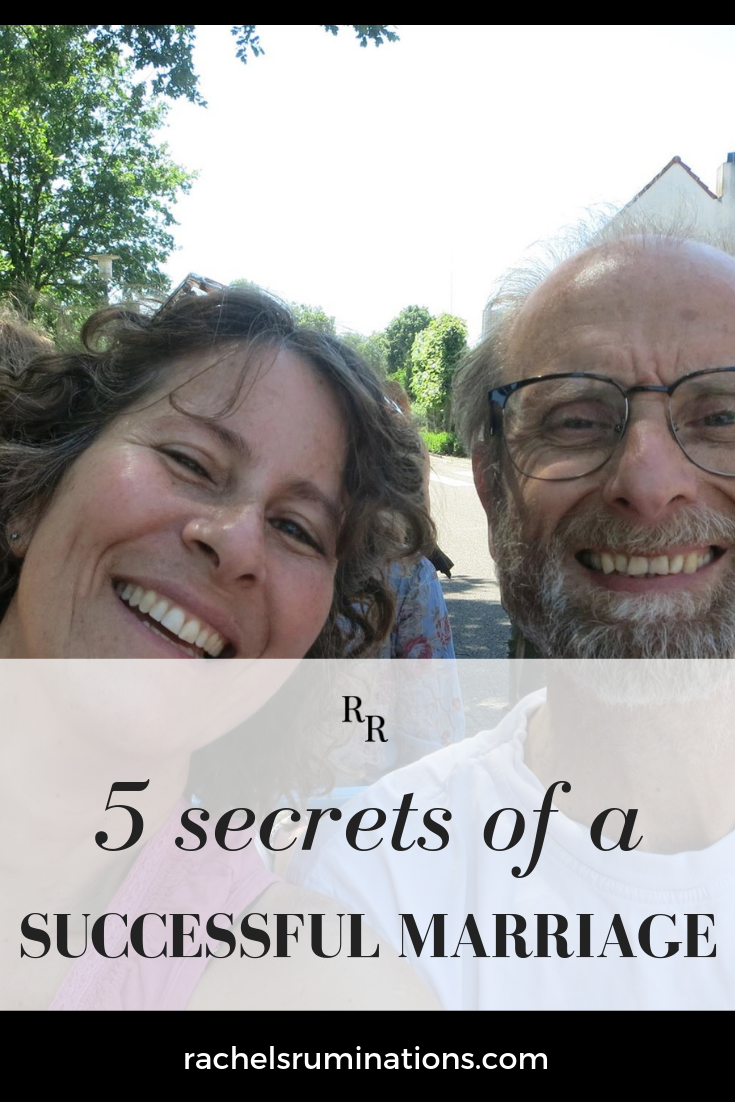 As of today, my husband and I have been married for 25 years. When people hear how long we’ve been married, I get one of two possible responses:

This post is directed at the second group, who wonder how we’ve stayed together so long.

I realize that personalities vary, and that my husband and I are both fairly even-tempered people who avoid conflict in our lives. That may be a large part of the secret to the longevity of our marriage. So, in other words, your mileage may vary (no pun intended).

Nevertheless, if you’re curious how we do it, it comes down to these five ingredients for a successful marriage:

I remember years ago, early in our marriage, when I took advantage of a school vacation to spend two weeks in Guatemala brushing up on my Spanish. When I returned and went to visit my grandmother, her first question—before even saying “hello”—was “What’s wrong with your marriage?”

The number one most important “secret” to an enduring relationship, in my view, is to remain independent people.

That may sound contradictory if you see marriage as implying that you have to do everything together. It shouldn’t.

My husband and I have always been independent people. It’s one of the things that attracted us to each other: that we were both people who could manage our lives ourselves, being able to make independent decisions and act on them with little drama. After we married—or maybe I should start 30 years ago, when we first started our relationship—that didn’t change.

We have separate interests and do separate things. My husband, for example, collects stamps and researches his genealogy. He loves both playing and watching soccer and he also plays tennis regularly. His Sunday morning soccer game is absolutely sacred; I wouldn’t expect him to do anything else on Sunday morning.

I do none of those things: I like to write and play on social media.

We both enjoy reading and watching good quality dramas on TV. We both love to travel, though he prefers active travel that includes things like long-distance hikes, while I’m happier exploring cities and villages.

For us, that quality time tends to involve travel, but it could be anything you both enjoy: gardening, or attending a ball game or a carnival or going out to dinner together. Many couples have regular “date nights.” When our kids were little, we went away without them for a long weekend about once a year. We felt it was important to prevent us from losing sight of each other.

In order to accommodate each other’s needs and wishes in this way, we often make deals. This can be small things like, when our kids were little, when one of us would say “Can you stay home with the kids tonight so I can go to my club meeting? I’ll watch them tomorrow when you go to your game.”

But it can also be big things. We first met in Malawi when I was on a two-year Peace Corps assignment and he worked for Memisa Medicus Mundi on a four-year contract. I went home to the US when my contract ended and we carried on a long-distance relationship. He decided he wanted to study public health and planned to apply to schools in the UK, but since we were not married and I had US citizenship, I wouldn’t be able to move to the UK and find work.

So we made a deal: he agreed to apply to schools in the US. I agreed to move to wherever in the US he decided to study. It meant higher costs for him, and, for me, it meant giving up a good job in New York.

I think it’s important, though, to make sure you can live with your end of the bargain. Negotiate respectfully and make sure that you’re okay with what you are agreeing to so you don’t have feelings of resentment later.

When I say that you should make deals, I mean you can make deals about pretty much everything. Being both a feminist and a generally untidy person, there was never a possibility that I would take on domestic chores willingly or happily. Instead, our deal is that we share them, which usually has involved some negotiation first. From what I’ve read, that’s not so common. Even when couples share chores, generally the woman does more than the man.

In the beginning of our relationship, when we were childless and both worked, we took strict turns cooking dinner. Later, that changed depending on our schedules, but each change in schedule involved renegotiating the deal.

When our kids were babies, we very strictly took turns with childcare. For instance, just because I was breastfeeding didn’t mean I was solely responsible for night feedings. If it was his turn, he would get the baby, change the diaper, and bring the baby to me in bed. I barely had to wake up to breastfeed. Then he would return the baby to the cradle. On my turn, he’d sleep through and I’d get up.

As for other chores, we still bargain over them as well. We both put in laundry if we think of it, but my husband generally does the folding, since he’s just better at it. I do more of the shopping, but he irons his own shirts. I wash the pots and pans and water the plants. He does small repairs around the house and the vast majority of the gardening. And so on.

One of the best pieces of advice we got when we married was to have separate bank accounts. Many couples end up fighting about money, and often that has to do with overdrawing because they’re both using the same account. Instead, we have separate accounts and separate payments that we’re each responsible for. My husband earns more, so he pays the mortgage, for example. I do the bigger grocery shopping trip each week, and I pay for that. And so on.

For safety’s sake, in case something happens to one of us, some of the accounts are actually joint accounts, but we don’t treat them that way. My husband’s daily account, for example, has my name on it too, but I don’t use it unless it’s an emergency, and in that case I call him to let him know.

You may have noticed that all of the above rules come down to respect. Respect is something I think a lot of people pay lip service to, but don’t actually feel. If you truly respect the other person, you don’t see him or her as a possession or a force to be controlled, but honor the person as he or she is. So that also means not trying to change the person, or expressing negativity if that person doesn’t live up to your expectations.

As an example, despite the fluctuations in my weight over the years, my husband has never once made a negative comment about my appearance.

Another example: when I announced that I wanted to quit one of my jobs and take a sabbatical from the other, his response was “Do what you need to do.” That shows an automatic respect for my feelings and my decisions.

Respect also includes being generally thoughtful and considerate of each other and not taking each other for granted. My husband always writes me a sweet card and gives me chocolates for Valentine’s Day, despite his view of the day as being a commercial invention. Every Thursday, when he finishes one job at five o’clock and starts the other at six, I make sure to have dinner on the table in time for him to gobble it down before leaving. And that’s despite my general feeling of distaste for playing such a stereotypically housewifely role.

So respect means a) viewing the other person as a valuable, independent individual. It means b) balancing your needs and wishes. It means c) give and take: making deals.  And it means d) avoiding conflict over money. All of these together, at least in our case, have added up to a long, happy marriage: our keys to a successful marriage.

I often hear people say that “marriage is hard work.” It isn’t for us. This may just be because of our personalities. But in our experience, any little disagreements become insignificant and hardly worth arguing about, since we feel valued for who we are.

Are you in a long-term relationship? Is there any advice you’d add to this list?

If you liked this article, please share it on social media. The image below is formatted for Pinterest.