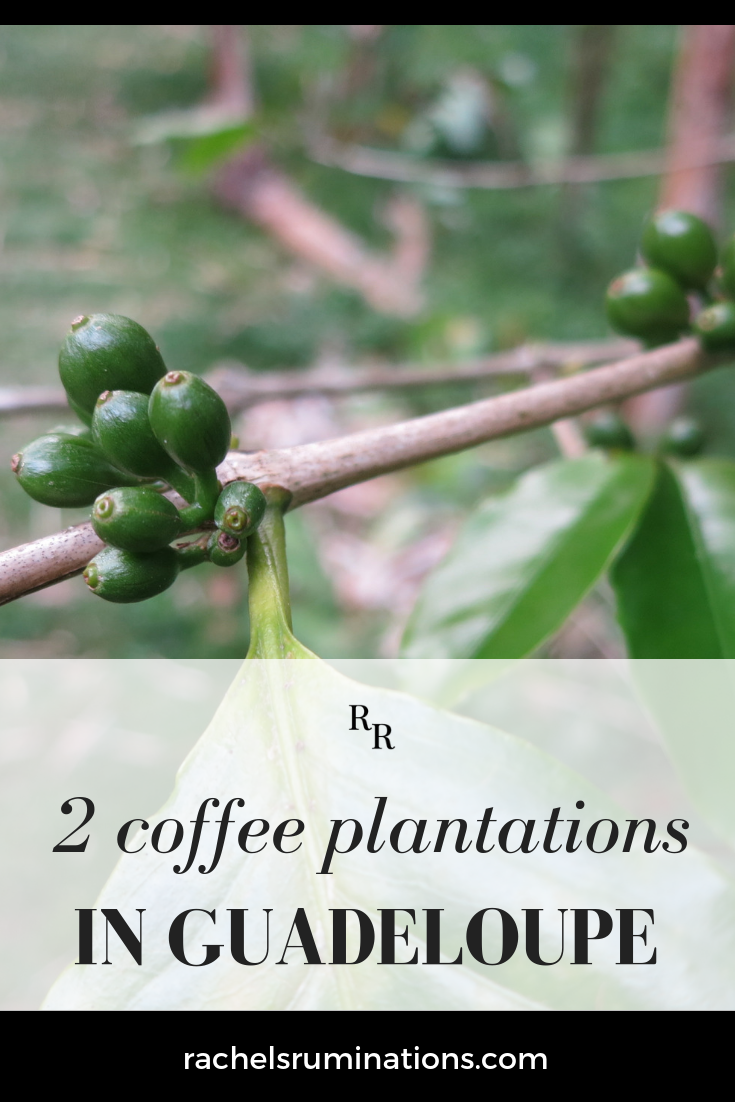 First of all, a confession: I don’t drink coffee. It’s not that I’m some sort of puritan; it’s just that I don’t like the taste. People say I could develop a taste, but I just don’t see why I would want to. When others drink coffee, I drink tea.

Nevertheless, I visited two different coffee plantations in Guadeloupe. Coffee was a key crop in Guadeloupe’s colonial period, and it’s still the second most popular drink in the world (after tea!). Unlike the banana museum I described in an earlier post, both of them were more formal and professional in their approach to offering tours.

Disclosure: This article contains one or more affiliate links. If you click on one of those links and make a purchase, I will receive a small commission. This will not affect your price.

Note: The buildings at La Griveliere are closed for renovation until January 2020.

La Grivelière was a colonial-era coffee plantation in Guadeloupe founded in 1761 with a French master and overseer and using slaves for labor. After the slaves were freed in 1848, indentured laborers were imported from India to replace them. Later, using paid labor, the plantation stayed in operation well into the 20th century.

Today, getting to the plantation requires some skilled driving. The road that climbs from the shore road twists and turns and narrows as it rises steeply. There are even places where it is required to honk your horn, since the corners are sharp and steep and very narrow!

After paying at the reception, I joined a tour that was just starting. The guide was businesslike and clear, and seemed to know everything about the crops that were cultivated there.

She showed us three kinds of coffee plants—Arabica, robusto and Liberian—and explained the differences among them and what they were each used for. She went into detail about the coffee-making process, showing us the “buccans” where the seeds were dried and the hulling machinery used to separate the seeds from their shell.

Coffee was never fully processed in Guadeloupe, except in small quantities for local use. Instead, the green coffee beans were sent to Europe and processed there: a colonial mercantilist economy in action.

Our guide also briefly discussed both the cacao plant and vanilla, since both were also produced on this plantation, along with bananas.

What interested me the most, though, was the history of the people who worked there. This tour was the first I’d been on which discussed the lives of the slaves in any detail. On a coffee plantation, they had to work 12-hour days at hard, manual labor. During the harvest, for example, they had to carry up to 100 kilos of coffee beans down the hill to where the beans would be dried and processed. The path we walked on was built by those slaves, to make the heavily-laden walk downhill less dangerous than on muddy ground.

I was disappointed when the guide walked us through the restored plantation master’s house without commenting on any of the three rooms that have been furnished to period. I would have liked to hear more about his life: was it as luxurious as we imagine, with him sitting back and drinking rum punch while the slaves toiled?

We were not shown either the overseer’s house nor the slaves’ quarters, which were being restored. Our guide, though, did describe how badly the slaves were treated, including some of the punishments inflicted on them, and said that the slaves’ quarters were very crowded and not divided into rooms. They were later used to house the Indian indentured laborers and, still later, paid laborers.

Here are some more articles about things to see in Guadeloupe:

I know much less of the history of Vanibel because the tour’s focus was on their production of coffee today. The guide explained the process in detail, just like the one at La Grivelière, except that here they finish the process. He showed us the grinders and roasters as well, which they use to produce their own Arabica coffees, one brand (blended with other coffees) for export and one that is purely for their own on-site sales.

This tour gave more information about vanilla than at La Grivelière, and it sounds like there’s a good reason it isn’t grown here for commercial purposes anymore: it’s very labor-intensive. I didn’t catch everything, since this guide spoke very quickly, but it seems to involve hand-fertilizing the flowers. The only bee that can do it naturally is only in Mexico, where vanilla originates. Pollination has to be done very early in the morning, and over a period of many mornings in a row, since the flowers only open for one day.

This tour guide’s description of the economics of coffee and vanilla and bananas made it clear why bananas (along with sugarcane) have become the main crops in Guadeloupe. Banana plants, for example, go from seedling to producing bananas in nine months. Coffee takes five to ten years before producing anything.  The Vanibel plantation, however, has stopped exporting bananas, since they can’t compete with the big producers like Chiquita and Dole.

The only historic building on this site is the old mill, used in the past to hull the coffee beans, so, really, this is not a historical tour at all, but rather an agricultural tour.

Which coffee plantation to visit?

If you’re reading this after January 2020, I would recommend visiting La Grivelière over Vanibel. La Grivelière is owned by the regional authority so there’s no ulterior or profit motive, other than promoting education and tourism around Guadeloupe’s history. It gives more of the history and plenty of information about the crops.

Vanibel, privately-owned, seems to be much more focused on their own coffee production, as well as promoting their rental accommodations next door (which look lovely, by the way). They both charge €7.50 for the tour, so the difference is only in the content.

To those of you who are coffee-drinkers, I can’t answer what is probably your biggest question: how’s the coffee? Both included a tasting at the end, but I can’t comment on which makes it better. You’ll have to visit Guadeloupe yourself to find out!

Visiting the coffee plantations in Guadeloupe

Location: Vallée de la Grande Rivière in Vieux-Habitants. Vieux-Habitants is on the southwest corner of the west “wing” of Guadeloupe. If you don’t have gps, take the N2 to Vieux-Habitants and ask someone to point you in the right direction. It’s a very small road and heads up the mountain.

Location: This coffee plantation is also outside of Vieux-Habitants. From the N2, take the D13 up the mountain, but, again, you’re better off asking someone in Vieux-Habitants to point you in the right direction.

As far as I could figure out, to get from one plantation to the other would have to involve descending to Vieux-Habitants first.

Get Your Guide has a number of tours and activities on offer in Guadeloupe. Have a look at them here.