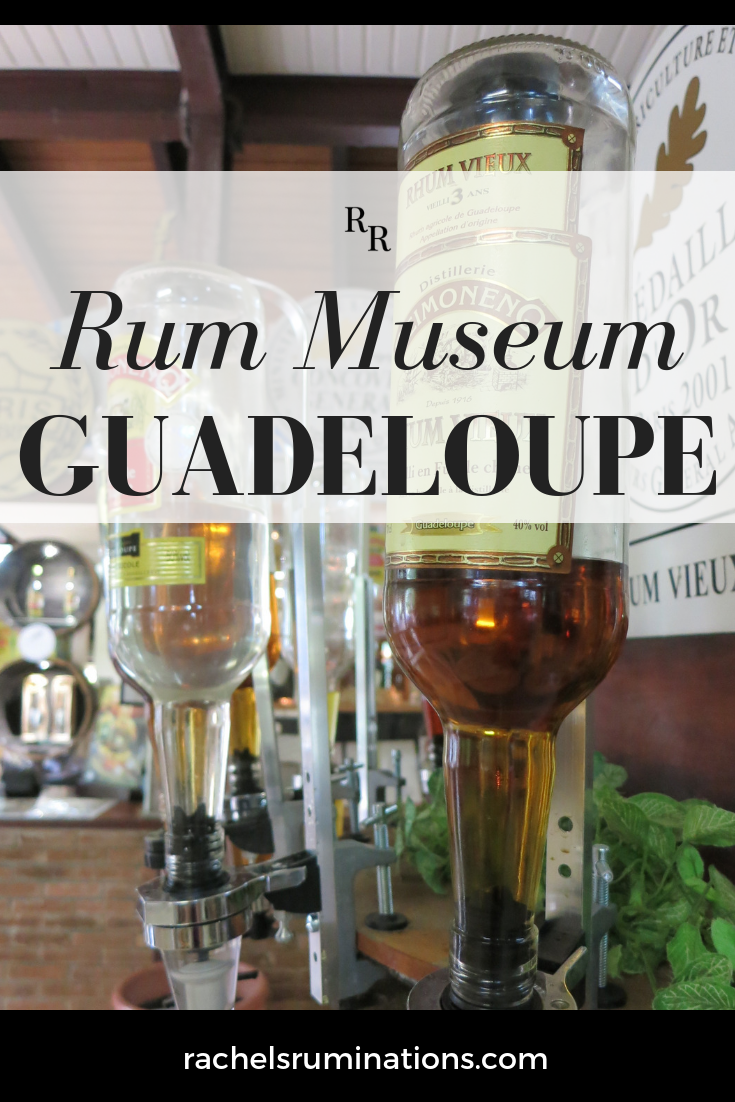 I posted before about Guadeloupe’s quirky banana museum. Well, that wasn’t the only quirky museum I found there. The Musée du Rhum, or Rum Museum, is another one of those small museums filled with odd, disconnected collections of objects.

But first, a disclosure: I was given free admission (normally 6 euros) in exchange for writing this blog post. Nevertheless, all opinions are my own.

And another disclosure: This post contains an affiliate link. If you click on it and make a purchase, I will get a small commission. Your price, however, will not be affected.

Before even entering the building, I was greeted by life-size models of animals. No idea why.

The rum part of the rum museum

Inside, two rooms on the ground floor contain an exhibit about the making of rum, as one would expect from a rum museum. Displays of various tools and equipment are accompanied by signs explaining the process they were used for: growing the cane, harvesting it, and processing it into rum. (By the way, this is one of the few places I visited in Guadeloupe that has any of its explanatory signs translated into English.) The signs are accompanied by old black and white photographs of that particular production step at this distillery. It was all very detailed, even down to one display about how an oxcart is built (Oxcarts were used to transport the sugar cane after harvesting.).

The machinery and the process of rum production are interesting; the mode of presentation was rather dry. Visitors are not allowed to tour the factory behind the museum building to see any of the process in action, which would have made this far more interesting.

After viewing the exhibit—which I just skimmed—I could watch a film about the process. This turned out to be a very dated (1990’s, I’d say) PR film about the Reimonenq distillery, the kind with long, slow shots. It did include some information about the production process, illustrating the exhibit I’d just visited. It ended with a long list, one-by-one, of each product they produce, including whatever prize each had won.

There are other fun and/or quirky museums to visit in Guadeloupe. Here are my articles about them:

The non-rum part of the rum museum

Upstairs was where it got a bit strange — which of course meant I enjoyed it all the more. In the stairwell stand more of those out-of-place animal statues like the ones I’d met outside. (Unfortunately, visitors are not allowed to take pictures inside the museum.)

And it kept getting stranger. This museum contains several different collections, and none of them seems to have much to do with rum. (Added later: This was explained in an e-mail I received later from the museum. Apparently the place was originally a distillery and people could visit. Later it became a more general museum.) Besides the life-size animal statues, there were:

One small case had a display of various kinds of women’s hats, all in Caribbean styles.

2. An extensive collection of model boats

The large collection of model boats would be great for shipping history enthusiasts. Each is accompanied by a sign detailing the history of that particular boat (in French and English). What do model boats have to do with rum? No idea. (Added later: Guadeloupe was discovered by Christopher Columbus; one of his boats is shown here. Also, the trade in sugar and rum was carried out via boats.)

3. A massive display of bugs

Yes, bugs. A large room is dedicated to insects: mostly butterflies, beetles and cockroaches, though I also spotted stick insects and a spider or two, among others. They’re all neatly pinned and displayed behind glass in small cases, like a collector does, some better labeled than others. I didn’t stay long in that room—it gave me the creeps. I have no idea what all those bugs have to do with rum. If you’re into entomology, though, this is definitely the museum for you. (Added later: a member of the family offered the collection. There are very few collections that are this complete, and the owners found it special to be able to display it in Guadeloupe.)

This exhibit consisted of large glass display cases holding mannequins of women working. A laundress in period costume was busy ironing. A black nanny held a white baby. A cook operated a churn of some sort. Another woman processed cotton. Another was cleaning. Each mannequin was backed by a black and white photo of a person who had that occupation sometime in the past.

In this exhibit there was very little text, so it was not entirely clear to me what its purpose was. Presumably these are examples of the kind of work women did at the distillery or the sugar cane plantation. Not one of them, though, demonstrated a task involved in processing sugar cane, even though the film downstairs specifically said that women were responsible for tying the harvested cane into bundles. (Added later: The intention is to show the work and crafts of the past, as well as to show the dress and hats that women wore even while they worked.)

I found this exhibit moving and disturbing: women literally as objects, behind glass, working, especially disturbing since the insects were displayed the same way, only smaller. (Added later: They’re behind glass to prevent people touching them.)

Get Your Guide has a number of tours and experiences in Guadeloupe that sound like fun. Read about them here.

Returning downstairs, the museum visit ends with rum tasting. Perhaps eight or so bottles of different flavors, from the strongest “agricultural rum” (50% alcohol) to mixes of juice and rum (generally 25%) hang in the display, and visitors can help themselves. I only tasted one, since I was driving: a mix of rum and passion fruit which I found quite tasty. I would have liked it over ice even more.

Should you visit the Rum Museum?

If you’re in the neighborhood of Sainte Rose, Guadeloupe, yes, if only for the overall quirkiness of the Rum Museum. Certainly if you like rum, or if you’re into model ships or entomology, there’s plenty for you here. Just make sure to choose a designated driver so that the rest of the group can do justice to the rum-tasting opportunity!

Have you ever visited a museum like this, with random odd collections on display?