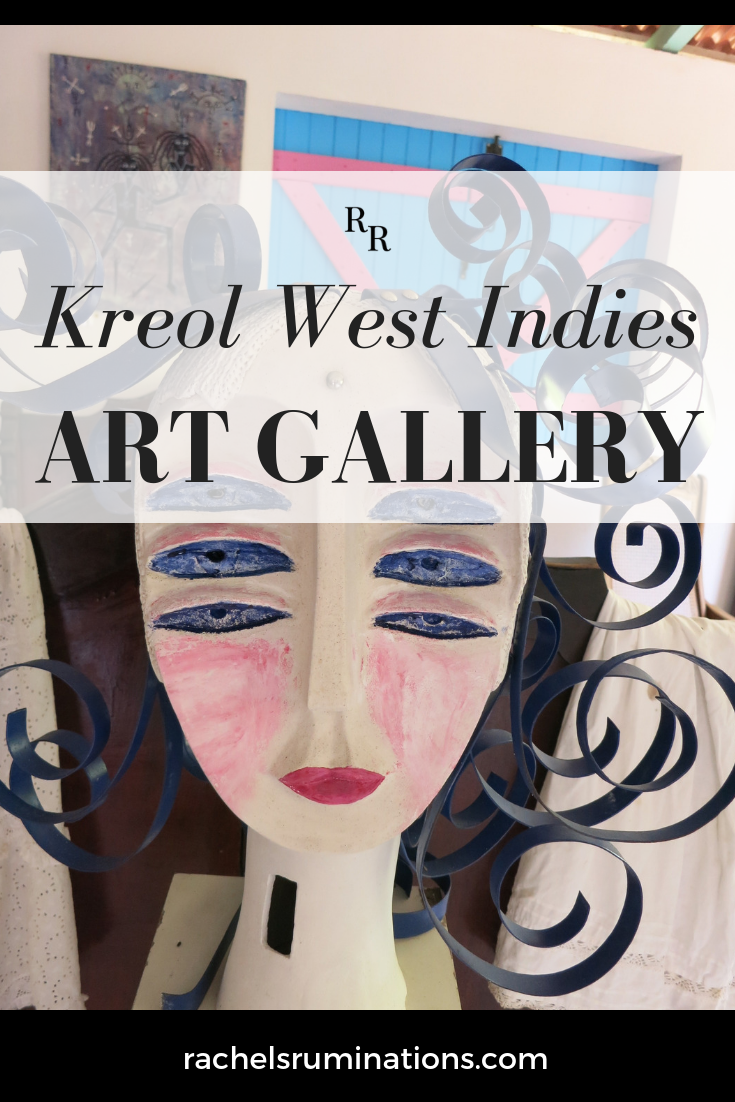 On my last day in Guadeloupe, I stumbled upon a special little museum. I was on my way to the easternmost tip of Grande-Terre, the eastern “wing” of the butterfly that makes up Guadeloupe’s main island. Called Pointe des Chateaux, it’s a windblown, craggy place.

On the way, I noticed a brightly-colored building, only catching enough of the sign to read “Kreol” and “museum.” On the way back past it after visiting Pointe des Chateaux, I decided to stop to check it out, fearing that it would turn out to be just a gift shop masquerading as a museum: the “authentic local crafts” come-on that is so often used to hawk made-in-China junk.

While there is a gift shop, I was entirely wrong. The Kreol West Indies (“Art, culture and beachwear”) operates on a unique concept: display the top Caribbean artists and, at the same time, in the same space, show local historical objects. It is an usual combination: traditional museum displays surrounded by some truly top-quality modern artwork. Yet somehow it works. And given the success of that combination, I felt more forgiving of the beachwear sales, since presumably that’s what supports the museum’s existence.

In the first “room” (In some places the sections are not actually separate rooms, but rather the displays and artworks themselves are used to define the spaces.), bits and pieces of the island’s colonial history are on display. Coins, for example, and coffeepots, books and toys, as well as the furnishings of whole rooms. Some were items possessed by the French colonial ruling families, some by their workers/slaves.

A “Pirate room” exhibits odds and ends from ships like a sextant and bottles and coins. Displayed in traditional glass cases, they are made more interesting through dramatic lighting and words painted densely across the walls. A background audio of pirates fighting, the clashing of swords and so on, enhances the effect.

The Native Americans are not overlooked, but their section of the museum is pretty bare-bones. A couple of small cases, not particularly well-lit, contain some small items, mostly just pottery shards.

It’s hard to know whether the native inhabitants never produced very much that would not decompose over time, or whether their culture on Guadeloupe was just extremely thoroughly erased. I suspect the latter, especially considering that their population was decimated through disease and enslavement in the centuries after Columbus’s arrival on the island.

Mixed in with all of the historical items is a wonderful collection of impressive modern art, both paintings and sculptures. For the art, it would be more honest to call Kreol West Indies a gallery than a museum, since these artworks are for sale.

There is a discrete list available with the price of each, and they’re not cheap. As you can see, these are not those luridly-painted sunsets and palm trees produced for tourists. The combination of modern art and antique objects struck me as peculiar but also surprisingly effective. Somehow it made the historical objects less dry and the sometimes confrontational artworks less overwhelming.

I didn’t spend much time in the gift shop, in my general resolve to keep to a very low budget. Nevertheless, the Kreol West Indies is making the effort to source its items locally, using locally-produced materials. I presume, as well, that the items they sell form their greatest income stream, allowing them to display the historical and art collections.

If you visit Guadeloupe, you’re likely to go visit Pointe des Chateaux, considered a “must-see” for visitors. Plan in some time in one direction or the other to take in this small museum/gallery/shop. There is a second branch on the smaller island of Marie-Galante as well. If you have the money to invest in art, you could very likely find a piece that speaks to you, not because the artist is Caribbean but because the quality is stellar.

(By the way, I paid the small entry fee myself and was not compensated in any way for this article.)

If you’re interested in reading more about Guadeloupe, here are some of my most most popular posts: