If you’re an American of a certain age, as I am, the name Aeroflot will conjure certain images. Aeroflot was the airline of the “commies,” and it was considered one of the worst airlines in the world.

We Americans didn’t fly Aeroflot. Partly because we didn’t, in general, visit the Soviet Union. They were the “evil empire.” But even if we did go there, the last thing we would want to do was fly Aeroflot.

Aeroflot had a reputation, and there was nothing good about it. The planes were decrepit Ilyushins and Tupolevs, prone to crashing in isolated places like Siberia. Even if they didn’t crash, they were in terrible shape, the story went: seatbelts that didn’t work, live chickens with the hand luggage, humorless, dour flight attendants, and so forth.

It’s odd that I have such a clear picture of this, given that I never flew Aeroflot before the break-up of the Soviet Union. It was just part of the lore that we, in the US, heard about the USSR. To check it, I consulted Wikipedia, the font of all knowledge, looking at the 1970’s only. I graduated high school in 1980, so the 70’s were when I would have formed this picture of the airline. Their page listing Aeroflot accidents and incidents certainly confirms the image, though most of the list happened on internal flights, not international.

I tried my best not to book Aeroflot for my trip to Hong Kong from Amsterdam, and then again for my trip back from Seoul to Amsterdam. The mere idea of flying with them pushed all my fear of flying buttons. It was, however, much cheaper than any other option, with the only disadvantage being the stop in Moscow.

Even as I was planning the trip, people asked what airline I was flying, which is something it never occurs to me to ask other people. They were generally pretty skeptical and concerned about my choice of Aeroflot. A certain series of expressions would pass in quick succession across their faces.

All they would actually say was “Aeroflot? Really?”

Given my knee-jerk reaction to the idea of flying Aeroflot, combined with their low prices, I did a bit of googling. It turned out that Aeroflot’s ratings these days are as good as any of the bigger reputable airlines, like KLM or United. I looked up recent reviews and the worst they reported was inedible food and surly flight attendants. I’ve had enough experience with inedible airplane food and surly attendants not to take that very seriously.

So I booked it. And, despite my preconceptions, it was fine. My first flight to Moscow was on an Airbus something-or-other: a 330, I think. It was relatively new and clean and everything worked. I wasn’t particularly happy that there was no seatback entertainment system for the three-hour flight, but that’s not such a big deal. And the food was edible, if not great. 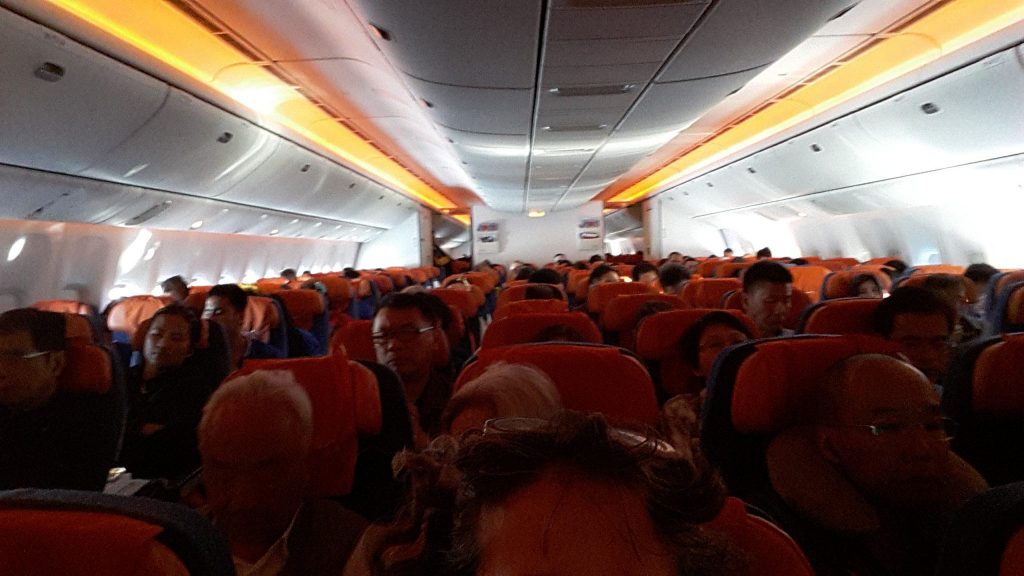 on the second flight, from Moscow to Hong Kong

The second flight, from Moscow to Hong Kong, was fine too. This plane was bigger and newer, a Boeing 777, complete with in-flight entertainment including a wide variety of films. No surly flight attendants either, and the food was quite edible, as airplane food goes.

So my preconceptions have been dashed. Isn’t it interesting how tenacious and enduring our assumptions can be, long after the reasons for those assumptions are gone?

Have you flown Aeroflot, either in the Soviet era or more recently? How was your experience?