As you know, I attended the TBEX travel bloggers’ conference in Lloret del Mar recently. While I was there, I was fortunate to be able to take a walking tour of Gothic Barcelona offered by Context Travel. They operate walking tours in more than 36 cities, “the world’s cultural capitals,” around the world. 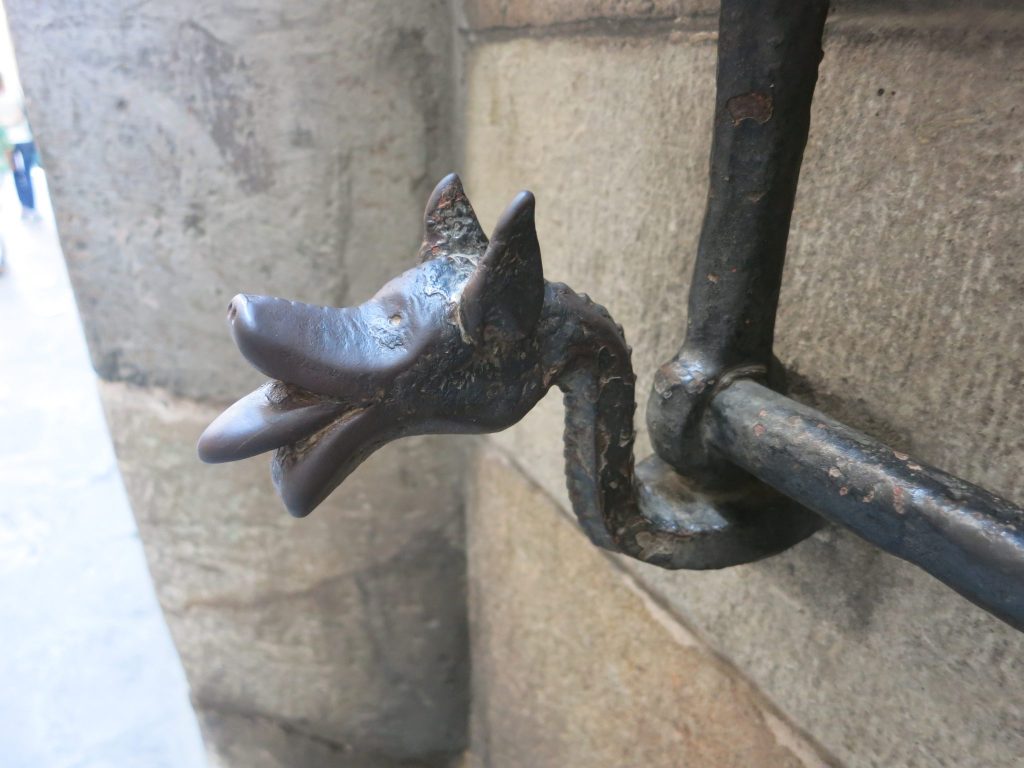 Lots of dragons in old Barcelona

Context Travel’s unique selling point, and what certainly sold me on them, is that they bill themselves as “Tours for the Culturally Curious.” The idea is that these are not your run-of-the-mill general tour of a city, pointing out the major sights.

Instead, Context Travel’s tours are more specific, and especially, more intellectual. Their tour guides are graduate students and professors in fields like archaeology and history.

The tour I took was of the old “Gothic” section of Barcelona, a standard on any tourist itinerary, and something I’d already explored on previous visits to Barcelona.

I was very impressed. Our guide, a history professor at Barcelona University named Biel, was extremely knowledgeable and seemed to be able to address any question we threw at him. There were only four of us taking the tour, but we were all the types of inquisitive bloggers who ask lots of questions.

The history of the Spain-Catalonia relationship? Biel explained it clearly. The significance of the different versions of the Catalan flag we saw? No problem; he knew the differences. Why did we see so many dragon images in the Gothic Quarter? He traced the origins of the image (St. George and the Dragon). And despite our late start, he still managed in his enthusiasm to show us some sights that none of us had seen before: a bit off the beaten path.

He was also extremely flexible. When bloggers travel, they have to take pictures of everything, and I mean everything. On this tour, we had a tendency to go wandering off to get a picture from a better angle or with better light or whatever. He was patient and responded to our needs.

We came across a procession at one point that he had not been expecting. It was the Dia de la Madre, Mother’s Day, which in Barcelona is also a day to honor the Virgin Mary. A small group of worshippers was carrying a statue of the Virgin through the streets in a procession that grew as they walked. Our group of bloggers, of course, was desperate to get pictures, and Biel obligingly adjusted his tour route to accommodate us. He also was able to explain the tradition to us. 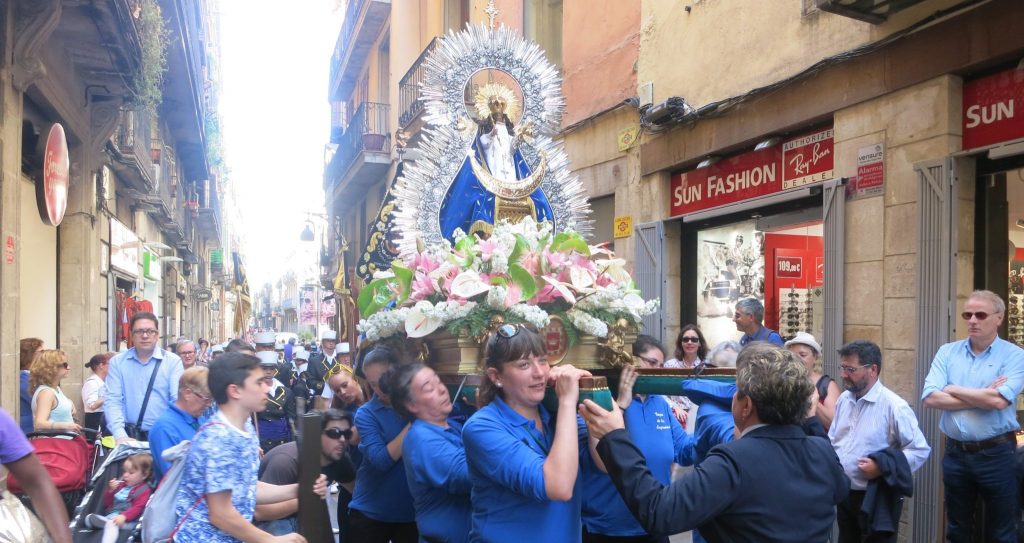 Women carrying a Mary figure through the streets, followed by a band and a crowd of onlookers

I was surprised to find out that much of the medieval section of Barcelona isn’t actually medieval. Instead, it’s a 19th century representation of what medieval looked like. Biel pointed out, for example, the bridge over the Carrer del Bisbe, and explained that, despite its medieval appearance, it’s a modernist confection. Those gargoyles can’t possibly drain any water: the roof above them would prevent any rainwater from reaching them.

In the Placa de Sant Felip Neri, a bullet-pocked wall used to be explained as a place where Republicans in the Spanish Civil War carried out executions. According to Biel, this was a fabrication. In fact, the damage was caused by Fascist bombing. After the war, the Fascist government never wanted to admit they’d ever bombed Barcelona. 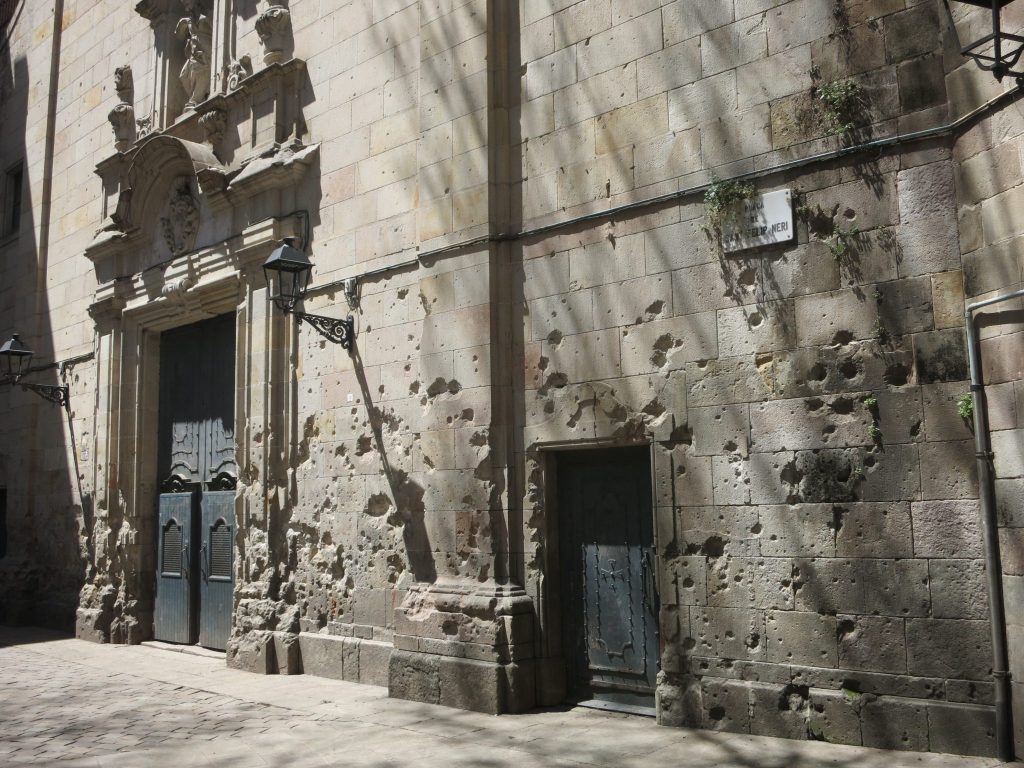 the pock-marked wall in the Placa

Another example of the Fascist government rewriting history: a “Roman” arch was built later from old building stones to support the Fascists’ pretense that Barcelona wasn’t damaged in the Civil War. Some of the bigger stones are indeed Roman, but that arch was never there. 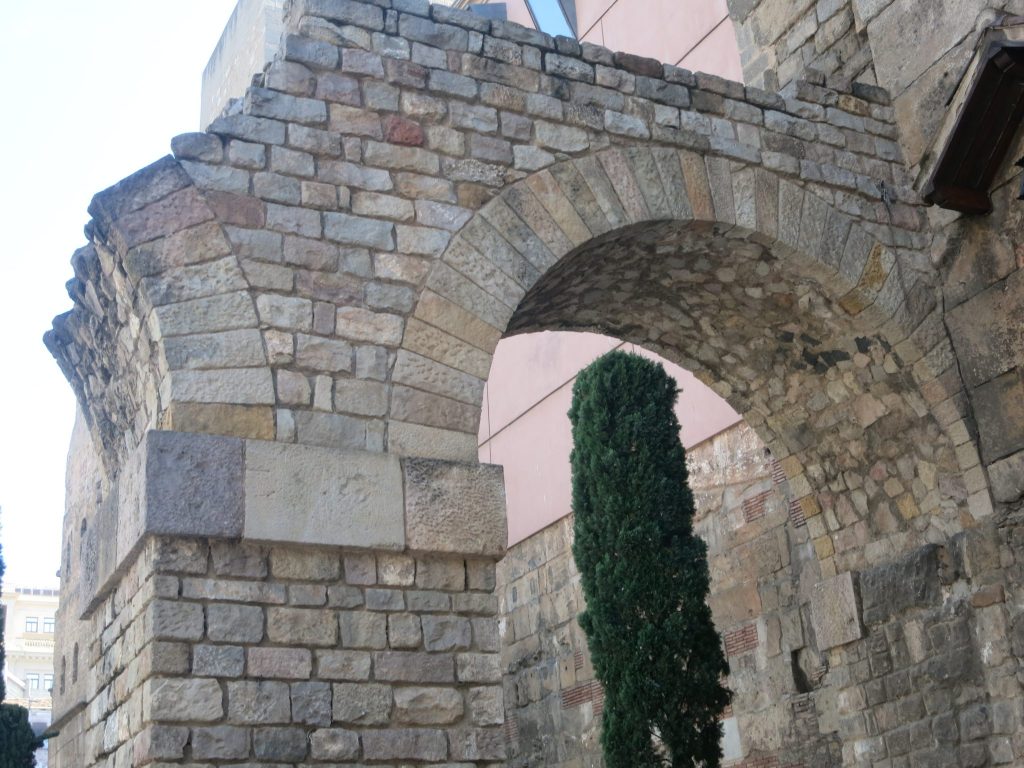 the Roman arch that isn’t

On the other hand, I hadn’t been aware that there were any Roman structures remaining in old Barcelona. Biel took us to see what remains of the Temple of Augustus.  A modern building encircles the Corinthian columns which stood in the center of the Roman city more than 2000 years ago. 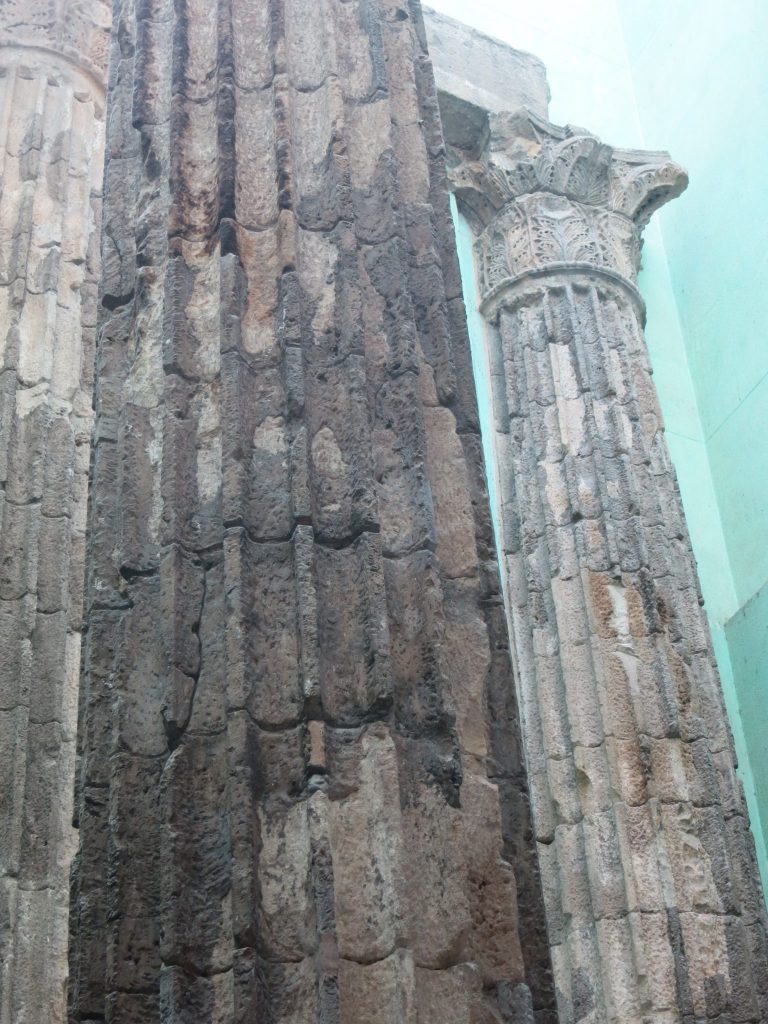 While Context Travel’s tours are on the pricey side, and couldn’t compete with the free tours some cities offer, you clearly get more for the money. The fact is, I had taken a tour in the same area of Barcelona before and while the guide did point out the fake Roman arch, he didn’t alert us to many of the details we heard from Biel and showed us nothing of the Roman period. Did he even know about it? Possibly he did, and just didn’t care to tell us, or possibly he just didn’t know.

I prefer a guide who knows his stuff and is able to present it in an intelligent, in-depth, interesting way, while being flexible to his guests’ needs. If this Context tour was any indication, it’s the way to go.

Disclaimer: I received the tour for free, but all opinions are my own.