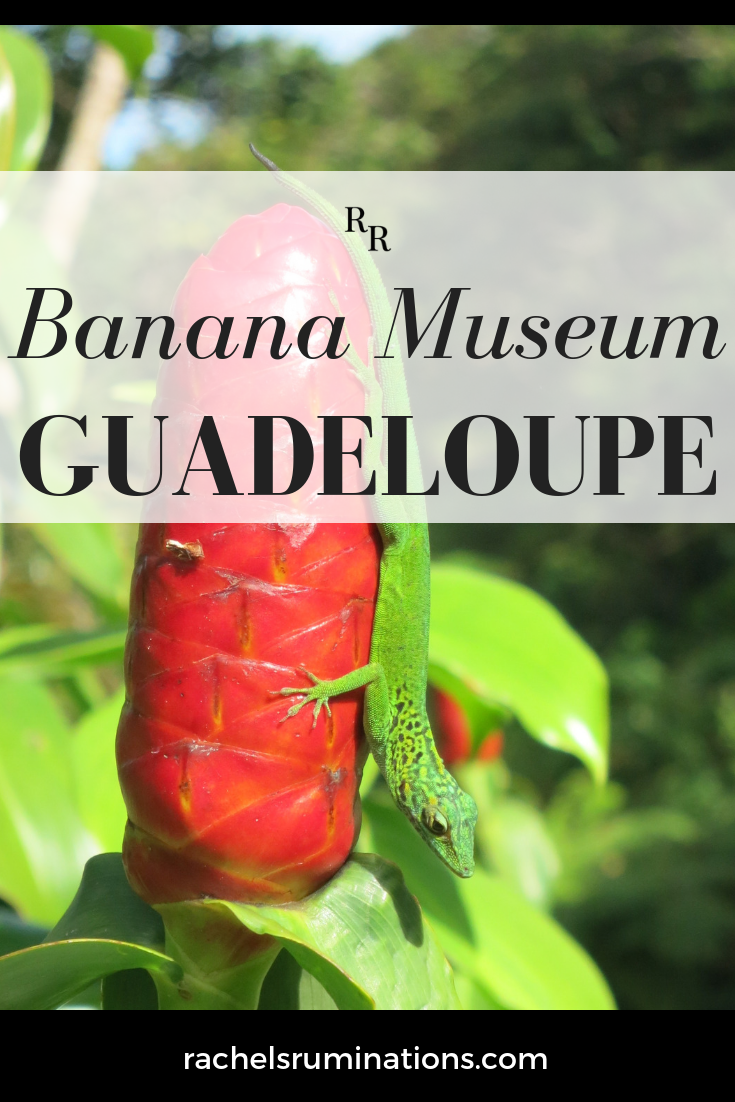 If you’ve read this blog for a while, you’ll know that I’m a fan of quirky, small museums. The Maison de la Banane (Banana House) in Trois-Rivières, Guadeloupe, certainly falls into that category.

I knew this was going to be one of those odd little museums as soon as I pulled into the little parking lot in front. I couldn’t park properly because of a gaggle of geese who had settled into a patch of shade and clearly had no intention of moving.

Disclosure: This article contains an affiliate link. If you make a purchase through the link, I will receive a small commission. It will not affect your price.

When I arrived at reception, a small group was just starting a tour outside, so I tagged along, figuring I could go back inside and pay afterwards. The only way I can describe the tour guide, Maurice, is to use the rather old-fashioned word “gentleman.” Not elderly exactly, but older than I am, with gray hair and a pleasantly-lined face, he smiled a lot and slurred his words slightly. He absolutely exuded pride in his museum.

My French is pretty rusty, so I couldn’t understand everything, but Maurice informed us about how the banana industry works, about the different varieties of bananas, and about the plant itself and how it grows, pointing out nearby plants for illustration. He mixed in a steady stream of jokes, but most of them I didn’t understand, unfortunately.

The tour took us only a very short distance past a building that is used for packing up bananas for export. Maurice explained what else there was to see—the plantation itself, a tropical garden, a view from the hill—and left the group to wander as they wished.

He had spotted me, though, and immediately ushered me back to the starting point, and once I paid (8 euros), insisted that I try an array of bananas. Perhaps, with a group, everyone shared the different varieties, but since I was now alone, Maurice seemed to expect me to eat them all. Fortunately, they were all small, and, indeed, there were distinct differences in flavor. One, for example, had a hint of pineapple flavor. One tasted vaguely apple-y. They were all delicious and Maurice seemed personally proud that I liked them. By the fifth one, though, I’d had more than enough!

Since Maurice was so intent on making sure that everyone got the full tour treatment, he ordered me to wait where I was after he spotted a French couple pulling into the lot. Soon he was ready to continue the tour with the three of us (presumably planning to bring the couple back for banana samples afterwards), when a family pulled up in their car, so again, we were ordered to wait while he dealt with them. If he’s that busy scurrying between groups, it might be time to establish set tour times!

When I was eventually released to wander through the wilds of the plantation, I enjoyed the stroll. Hand-written signs dotted the place, identifying the different banana varieties as well as other trees and shrubs. The signs indicating the direction of the walking route were impossible to follow, so I stopped trying and just wandered at will. Maurice had told us of a tropical garden up the hill, so I headed there, though I never quite figured out where the tropical garden started or where it ended. After all, the whole place seemed like a tropical garden; I never knew banana plants could have such beautiful flowers!

If you’re interested in reading more about Guadeloupe, here are some of my articles from there:

The plantation house at the Banana Museum

Arriving back at the reception, I asked for directions back toward where I was staying, but, again, was ordered to wait, along with a family who was, in theory at least, also ready to leave. We had apparently not yet received the full tour, so a woman emerged from the reception to lead us to the “plantation house.”

She explained that it had been restored to its original colonial-era condition, but its insides certainly weren’t done to period. No one then would have had that much stuff cluttering their living room! In any case, some of the objects were far more recent, like the radio you can see on the shelf in the picture below. It looked as if someone had given the museum their collections of various odds and ends, and all of it was crammed in there.

The oddest were the mannequins. They were there to model clothing of the colonial period, but their expressions were bizarre: some were puckering like they were giving a kiss (you can see one in the photo above in the background), while some were frozen in a strange-looking laugh. Presumably in another life they were part of some cutting edge fashion display, but now they just looked creepy.

The antique (vintage?) typewriter display was also a mystery; what do typewriters have to do with bananas? (Sounds like the start of a bad joke, doesn’t it?)

End of the “tour”

The woman who had led us to the plantation house had ordered us to come back to the beginning after walking through the house. Obediently, we did so, but she had disappeared. The other visitors sat down to wait, but I’d had enough of being ordered around and went back to reception. I noticed that there was an actual museum there: a room with displays (mostly just text) explaining everything about bananas. I wasn’t interested enough to struggle through all that French, so I asked Maurice, now returned from guiding the latest arrivals, for my directions. Still smiling, still gentlemanly, he seemed ready to let me go now and cheerfully waved me on my way.

The geese were nowhere to be seen now, by the way, replaced by a kitten, a hen and her chicks.

Location: Route de la Regrettée, in Trois-Rivières, which is at the southern tip of the western “wing” of Guadeloupe. The museum is on the N1, uphill from the village of Trois-Rivières.

If you’re thinking of visiting Guadeloupe, check out these tours. And if you enjoyed this article, please share it on social media! The images below are formatted for Pinterest.