It was four in the morning when I began writing this post. I just arrived in Guadeloupe last evening and, with the six-hour time difference, my internal clock told me it was well past time to get up.

Seeing it was still dark out, I lay there listening to the sounds of the night and thought I’d write about them.

I’m staying in a room I found through Airbnb: my host’s spare bedroom, here in Goyave, Guadeloupe. It has windows on two sides and I left one of them open so I could enjoy a breeze, for once, that’s not so cold it disturbs my sleep.

At about two in the morning, I think, a rooster crowed once and woke me up. It was only that tentative half-waking, though, which usually lets me fall back to sleep right away if there’s nothing on my mind. However, the rooster was followed immediately by a sudden torrential downpour. I couldn’t see it when I arrived, but this downpour showed me that the house has a corrugated-iron roof. When I looked out one of the windows from my bed, I could dimly make out a series of parallel vertical water flows: the rain hitting the roof was obviously draining along the corrugations. 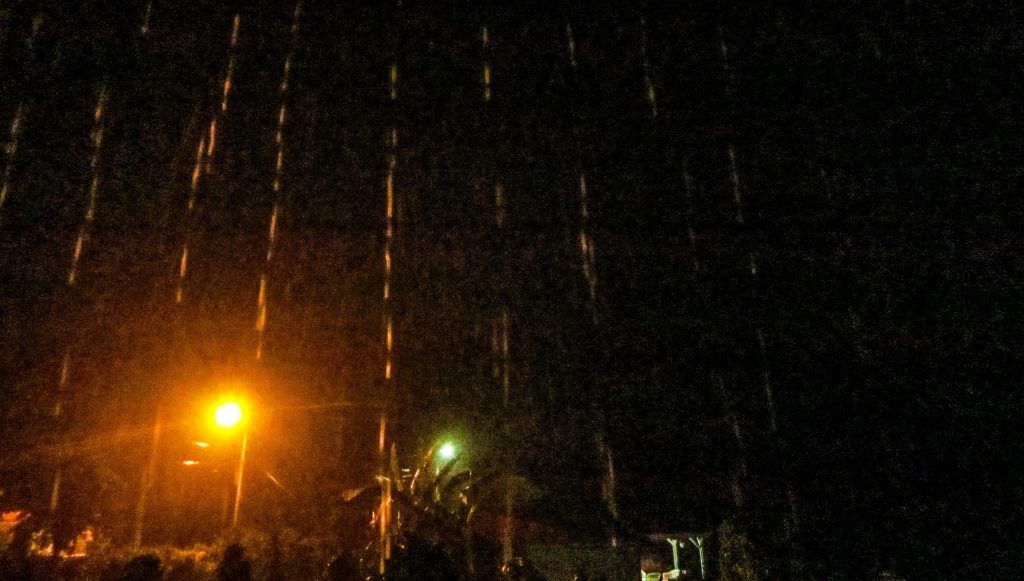 The streams of water out my window.

Fortunately there’s an interior ceiling as well, so the sound wasn’t deafening, but nevertheless, “torrential” is the word. It was a loud, constant roar, diminishing by the time I fell asleep again. When I woke up at four o’clock, the rain had stopped.

I lay in the dark and listened to the night, filled with unfamiliar sounds.

Cars passed on the highway nearby here. Okay, that’s not unfamiliar, but I don’t usually hear the highway so clearly from my bed at home. At that hour, it was just the occasional whoosh of a lone car or truck. It must be a more constant roar during the day, I supposed.

I was aware of the crickets as soon as I arrived in Guadeloupe last evening. There must be a lot of them: now that it wasn’t raining, they were the dominant noise. Their constant rhythmic buzzing formed the backdrop to all of the other night noises.

I noticed, as I listened more carefully, that there was birdsong mixed in. It was hard to discern, mostly drowned out by the crickets. When I listened carefully, I could make out a few different types. One sounded like a monotonous, almost continuous tweeting, while others just chimed in now and then with a variety of sounds. They blended so well with the crickets that it would have been easy to miss them if I hadn’t been paying attention.

Mr. Rooster started up again as I listened, and only crowed twice this time. I imagined he was still deciding whether it was morning or not.

The rain returned, and, within a few minutes of its start, the torrential roar masked all the other sounds. I fell asleep again. Something about the constant drumming sound seems to help me sleep.

The sunrise as seen from my bed

When I woke a while later, sunrise was nearing, and the buzz of the crickets had faded, so I could hear the birds more clearly and distinctly and discern a bigger variety of bird song. Unfortunately, the noise from the highway gradually became more constant, the birds and the cars competing.

The rooster started up again once the sky began to lighten. And at about six o’clock, I decided that, despite my fitful night of sleep, I might as well get up and start my first day in Guadeloupe.

Have you ever woken up in a new place and listened to the night sounds? Did you find it soothing or disturbing?

If you’re interested in reading more about Guadeloupe, here is a list of all my posts from there: