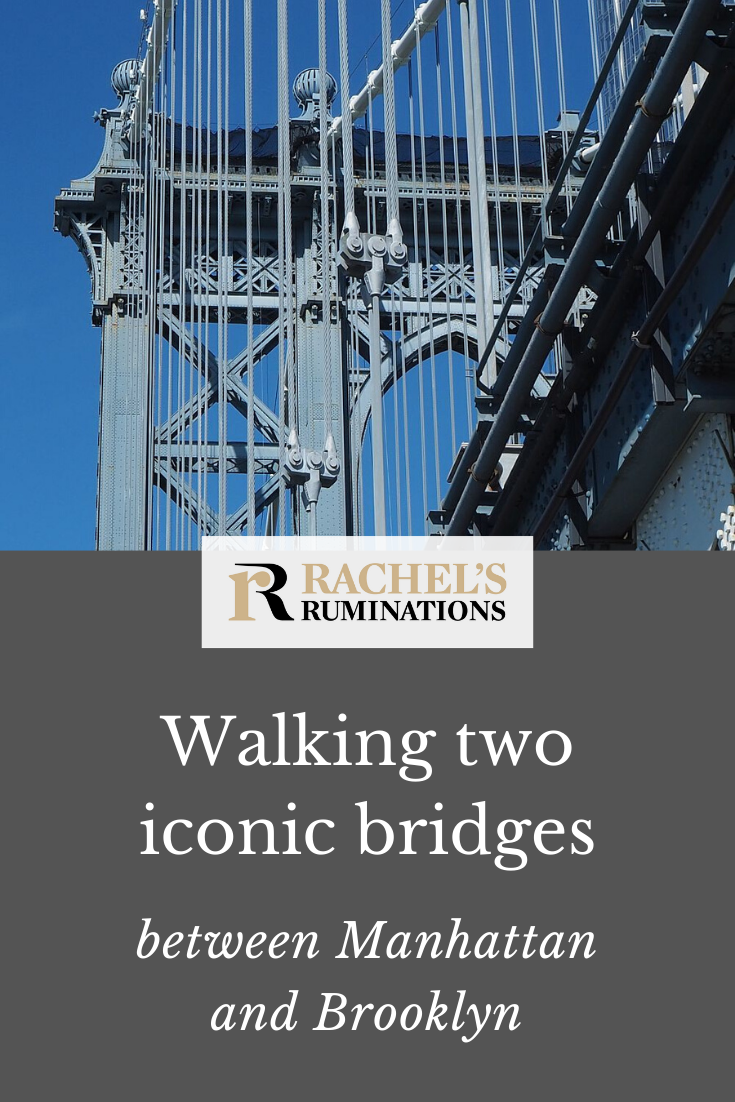 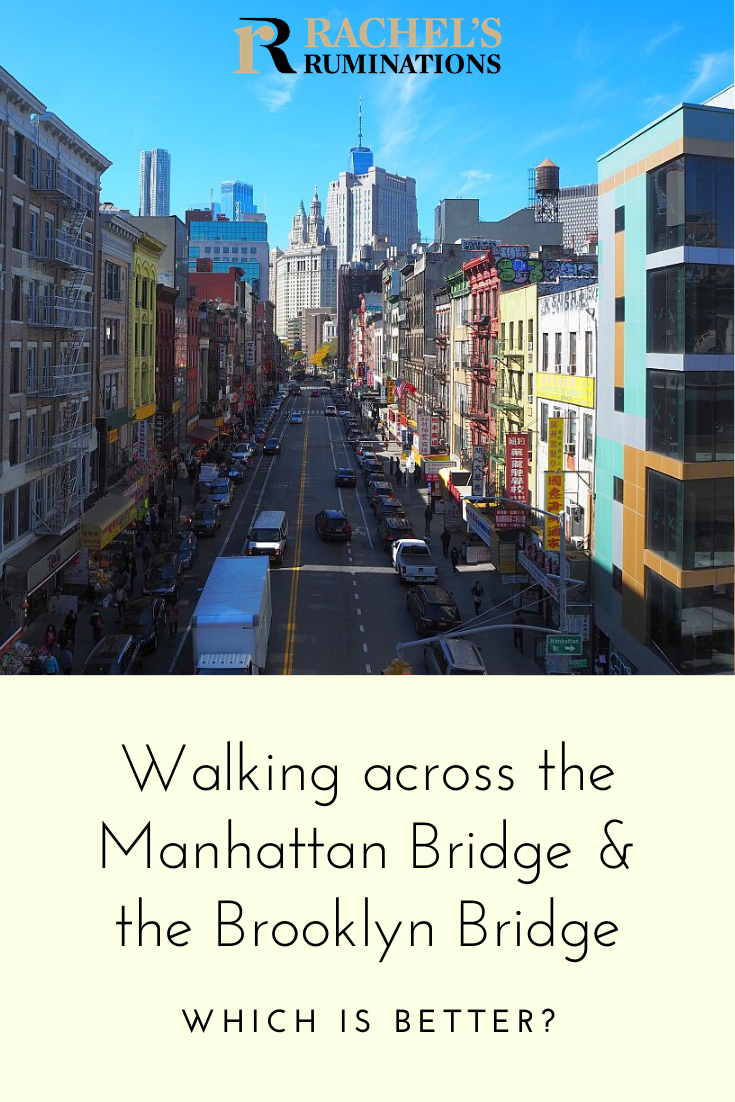 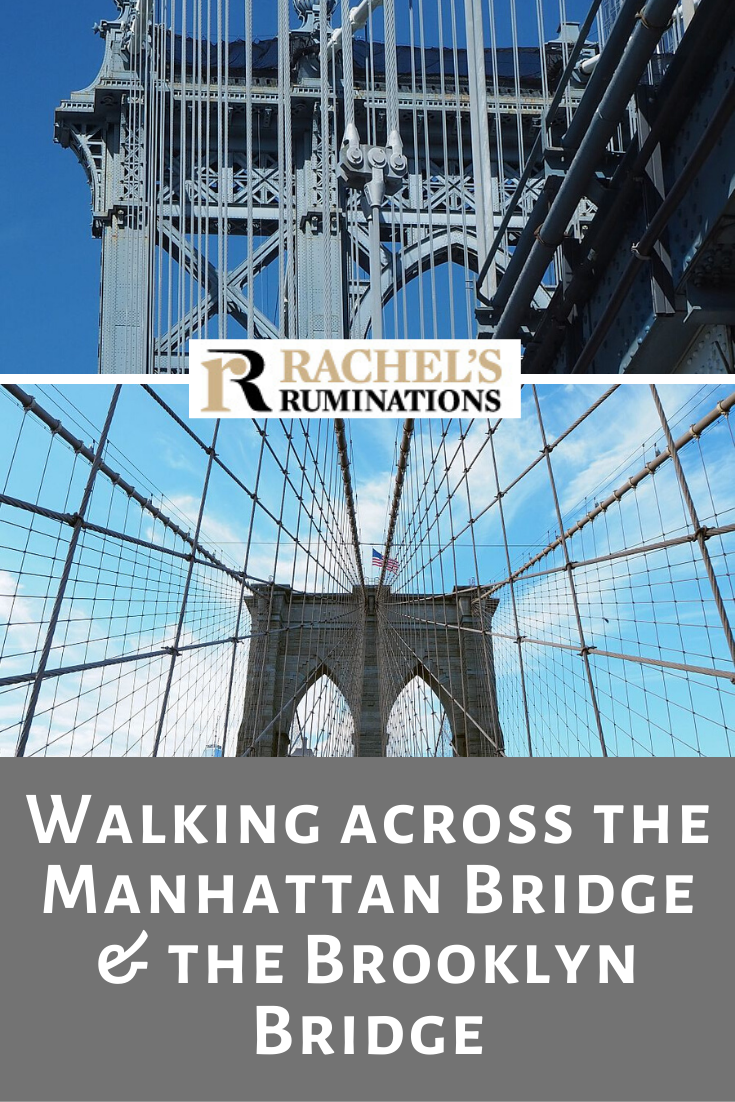 When I was in New York recently, intent on keeping to a tight budget, I checked my own post about budget things to do in New York City, and decided to take a walk across both bridges.

The bridges are right next to each other, relatively speaking. Both are suspension bridges and connect Manhattan to Brooklyn. They both have walking and bicycling paths. But that’s where the similarities end.

It was a Saturday morning, and I started on the Manhattan Bridge, headed for Brooklyn.

According to Wikipedia, Manhattan Bridge was completed in 1909, originally with only one level. It held car traffic in both directions as well as trolley tracks, soon replaced by subway tracks. In 1922, the upper level was added.

Today, both levels accommodate traffic, while only the lower level carries subway tracks. In the early 2000’s two more paths were added: one for pedestrians and one for bicyclists. The bridge has needed lots of repair over the last 100 years, mostly due to the wear and tear of the subway trains rattling across it.

Following the walking route from Chinatown that Google maps presented to me, I ended up on the southwest side of the bridge. It turns out that the southwest side is reserved solely for pedestrian traffic, while bicycles are relegated to the northeast side only.

Walking across the Manhattan Bridge

Before even entering the bridge’s pedestrian path, I stopped briefly at the Mahayana Temple Buddhist Association, a moment of peace in the frenzy of Lower Manhattan. You’ll find it on the left as you face the bridge, before the big Bridge Arch and Colonnade that spans the entrance to the bridge.

Walking across the Manhattan Bridge was a pleasant experience on a Saturday morning, except when subway trains passed. The video below gives you an idea of how loud they are. What it can’t show is that the whole structure shakes when they pass.

It made me a bit nervous at first, but I got used to it. When a subway car was not passing, the noise subsided considerably to the usual dull roar of New York City and the whoosh of the cars zipping by to my left and on the upper roadway.

I had the path practically to myself, only encountering an occasional jogger or walker, as you can see in the last frames of the video.

The first part of the bridge is sloped upwards, of course, and rises above the city streets of Chinatown. It gives an unusual view, so that architectural elements you’d normally have trouble seeing are much nearer by.

Since the path is on the southwest side of the bridge, you can’t get a view of the whole city from here. Instead, you only get lower Manhattan’s cluster of skyscrapers, including the new World Trade Center. The midtown skyscrapers aren’t visible because the bridge’s structure blocks the view.

At the same time, you have a great view of the Brooklyn Bridge and also of Brooklyn. As you near the other side, you can look down at the newish public spaces edging Brooklyn: Main Street Park, Empire Fulton Ferry Park, and the little glass building holding Jane’s Carousel.

A short time in Brooklyn

The Manhattan Bridge is over two kilometers long and I’d walked quite a bit just to get to it. At this point it was lunchtime so that became my goal: to find a place to have lunch somewhere on the route between the Manhattan Bridge and the Brooklyn Bridge.

I ended up at the area generally referred to as DUMBO, which does not stand for the elephant but rather for “Down Under Manhattan Bridge Overpass.” Once a thriving waterfront district for shipping (tobacco, coffee, sugar, leather and lots of other products) and fishing, the old brick warehouses and factories remain, now converted for other uses: offices, shops and housing.

Inside one of the buildings is a high-end mall called Empire Stores, including the Time Out Market, a food court of sorts, but very chic and rather expensive.

Before choosing food, though, I stopped into the Brooklyn Historical Society‘s exhibition called “Waterfront” in the same building. The exhibit there focuses solely on this section of Brooklyn: the businesses in these warehouses, the goods that were imported through here, and the people who came here to work. It is small but interesting, and I’m sure a trip to the main location of the Brooklyn Historical Society on Pierrepont Street would be well worth the time, but I didn’t find that time.

After the museum, I spent quite a while wandering the extremely crowded and loud food hall on the first floor, trying to decide what I wanted for lunch from all the tempting choices. (There are also some food choices up on the fifth floor.) I eventually decided on a bowl of soup from Mr. Taka Ramen. It took a while to get my soup because of the line to order and then the wait while it was prepared. Then I had trouble finding a seat at any of the communal tables – remember, this was a good weather Saturday at lunchtime.

After I finished eating, I first spent at least a half an hour in the ridiculously long line for the ladies’ room. Then I took a quick look upstairs on the 5th floor. It was just as crowded, but up there you can get a great view of both bridges. I’d recommend going up there just for the view, even if you don’t want to get any food or shop.

And, by the way, much of the waterfront here is very strollable, with riverfront walking paths in strips of parkland.

The Brooklyn Bridge turned out to be a very different experience from the Manhattan Bridge.

Like the Manhattan Bridge, the Brooklyn Bridge has two levels. Originally carrying horse-drawn carriages, railway lines, and later, trolley tracks, nowadays it holds car traffic (no trucks allowed) on the main level and pedestrians and bicyclists above the car lanes. It has also been upgraded and repaired a number of times over the last 100+ years.

My walk across the Brooklyn Bridge

At the same time, walking and biking across the Brooklyn Bridge are very popular things to do, especially on a sunny October Saturday like the day I decided to do it.

It was extremely crowded. I couldn’t really stroll, as I had on the other bridge. Rather, I stepped and stopped and cut to the left or right around selfie-takers or just shuffled along behind whoever was in front of me. Tourists stopped short to take pictures. Some sat on the side walls to pose for selfies. Many paid no attention to the line slicing down the center of the roadway and sidled along, oblivious to oncoming bicycle traffic. And bicyclists – less likely to be tourists and more likely to be locals trying to get from point A to point B – got very annoyed, yelling and whistling and ringing bells to try to get walkers off their path.

It was much less fun for me than the Manhattan Bridge. The views weren’t as good either, since the pedestrian/bicycle path runs down the center of the bridge rather than on one edge or another. Any views I got were crossed by the bridge’s cables or the steel structure of the roadways below, as you can see in the photo above.

On the other hand, the bridge itself is prettier, with its stone-built Gothic Revival arches. It also allows views from both sides, even if they are partly obstructed. From here I could see both the southern Manhattan skycrapers and the skyscrapers of midtown, including the Art Deco Chrysler Building and the Empire State Building.

Which bridge should you cross?

Are you planning a trip to New York City? Find your hotel on Booking.com.

On the Brooklyn side, York Street station (the F train) is closest to where you descend from the path. I didn’t plan my route from there to the Brooklyn Bridge. I could see which general direction I needed to walk and just did that.

On the Manhattan side, the Brooklyn Bridge-City Hall station (4, 5 and 6 trains) is closest. Chambers Street (J and Z trains) is only a bit further.

On the Brooklyn side, the High Street-Brooklyn Bridge station (A and C trains) is closest.

Have you ever walked across either bridge? What was your experience?