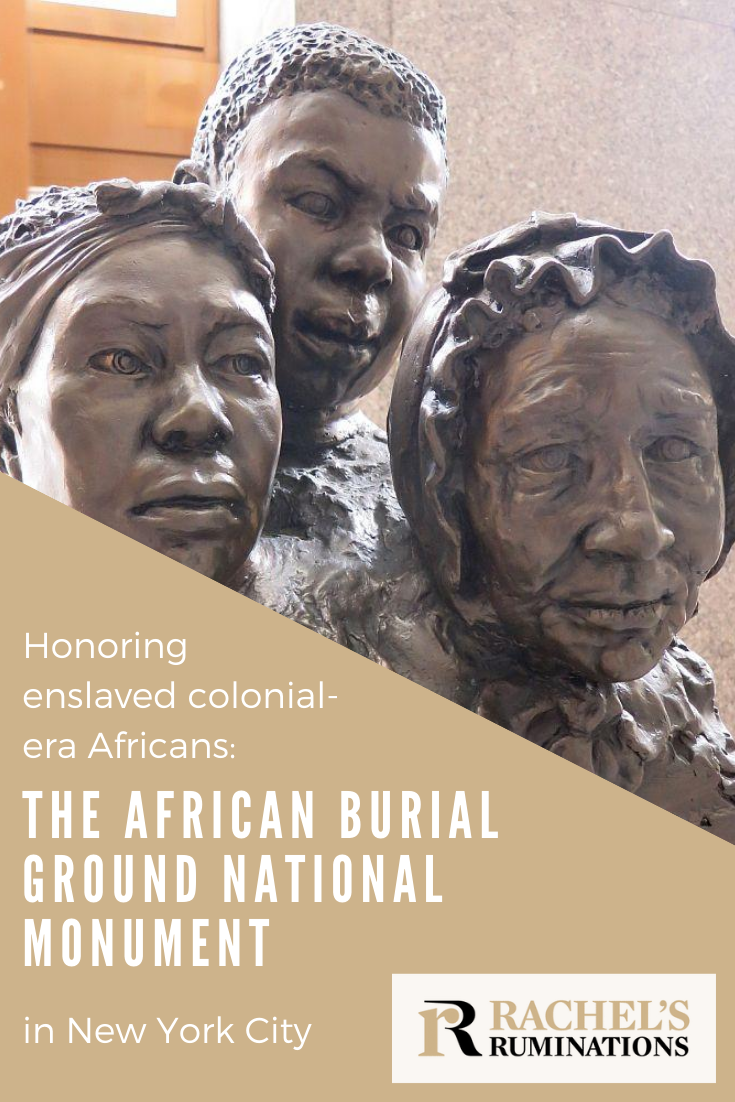 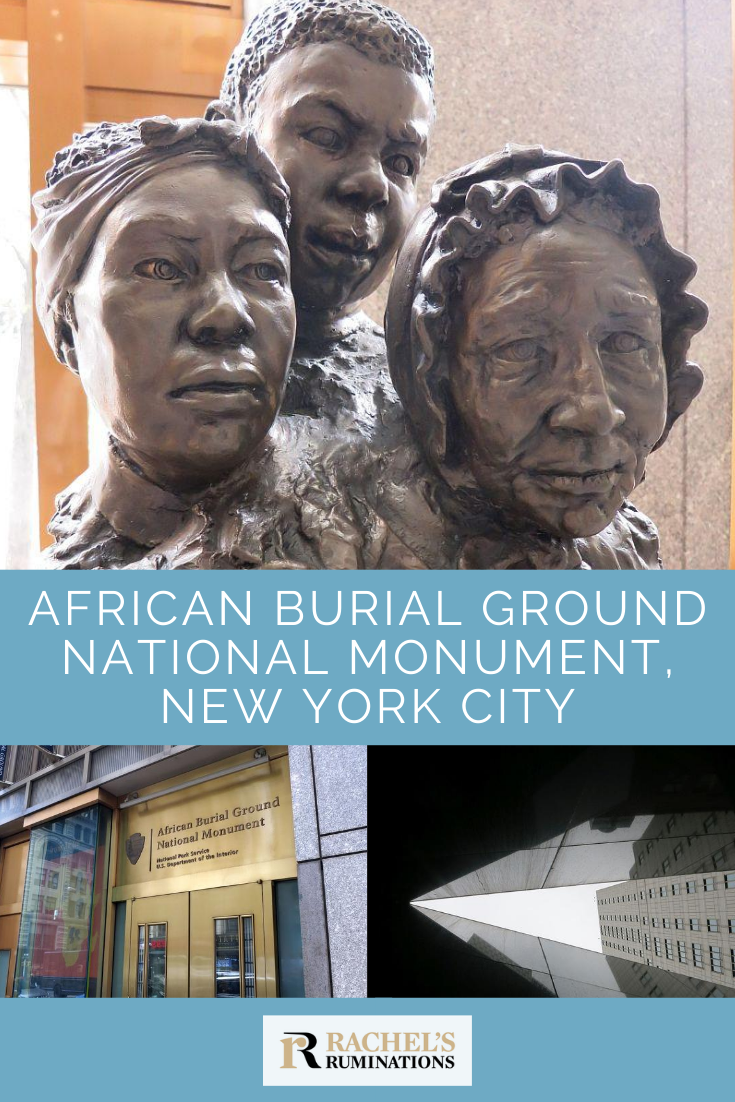 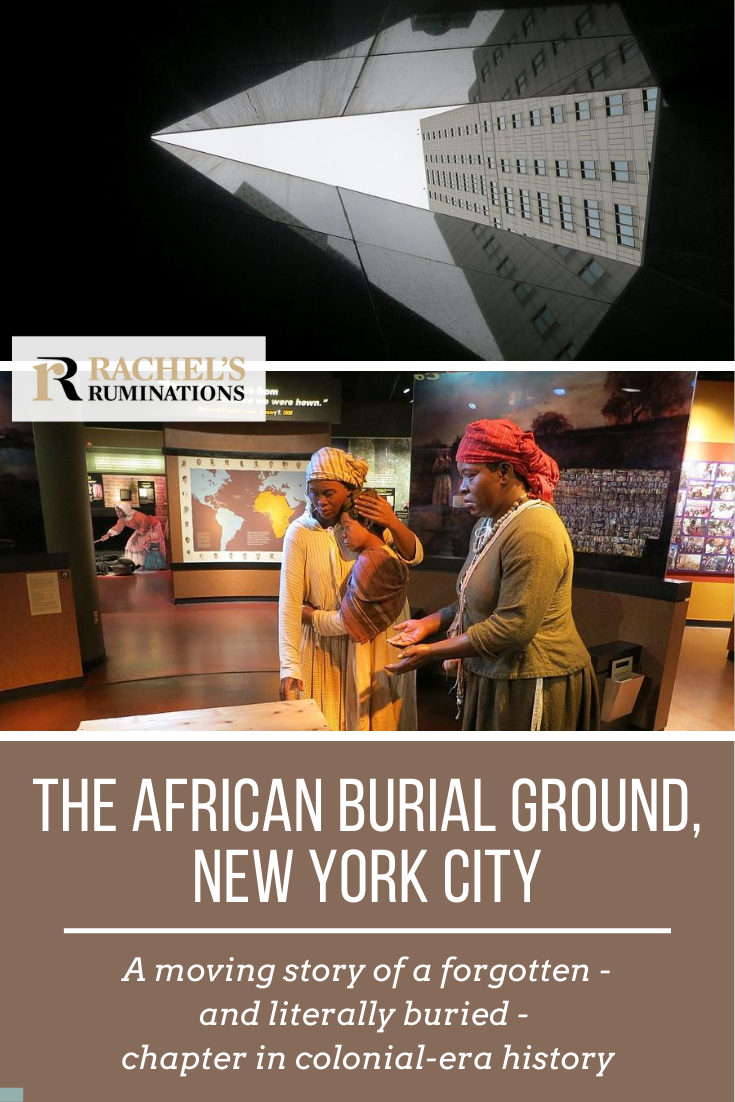 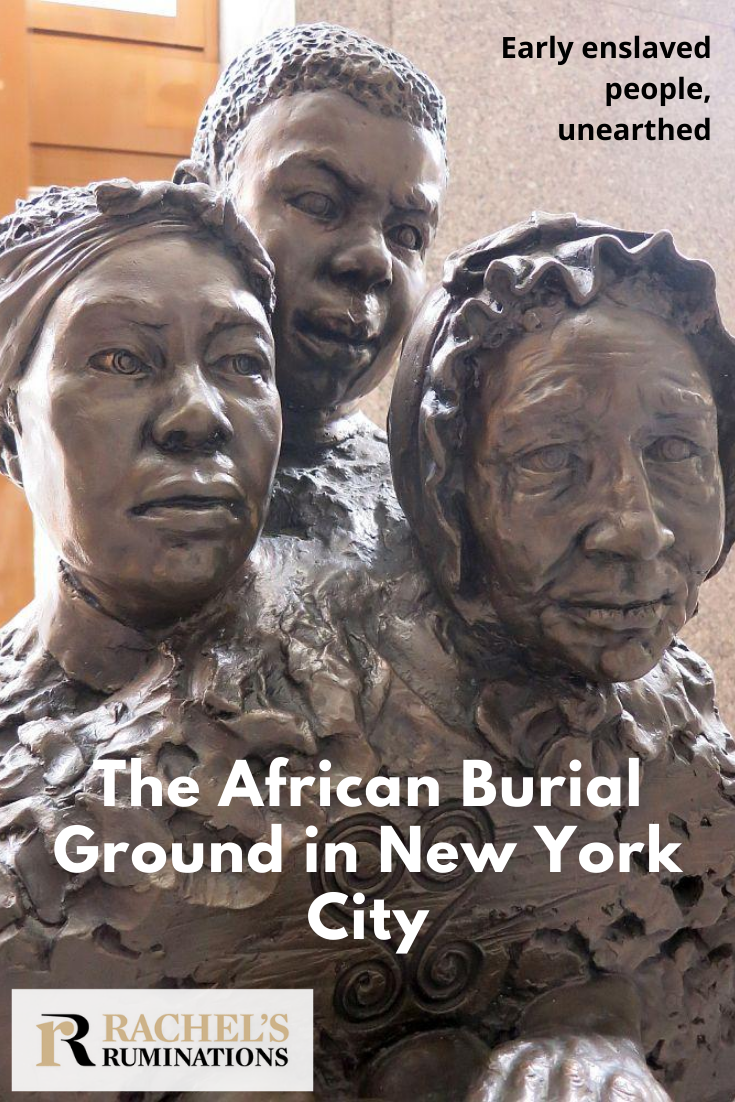 New York City’s African Burial Ground National Monument has an interesting history. Or, rather, two histories: one of the people who were buried there, the other of the rediscovery of the graveyard and the establishment of this monument.

Disclosure: This article contains an affiliate link. If you click on it and spend money, I will receive a small commission. This will not affect your price.

Rediscovery of the African Burial Ground

In the process of preparing a building lot for a new federal building in Manhattan back in 1991, builders came upon a number of graves.  The discovery led to strong protests at the disturbance of this sacred ground. Work stopped in order to allow investigation of the finds, which was carried out at the Cobb Laboratory, a research institute at Howard University.

Through their research, scientist were able to determine in great detail the health and age of the 419 remains that were dug up from about an acre of the burial ground. The burial ground was originally, as evidenced by a map dating to 1755, more than six acres in size, so there were (are!) undoubtedly many more graves hidden under neighboring buildings.

Once the archeological investigation was concluded, the remains were reburied in 2003 using caskets from Ghana, and marked by West African funeral rites. The African Burial Ground National Monument was established on the ground floor of the newly-built Ted Weiss Federal Building.

Africans were kidnapped from many parts of Africa and brought to this city as early as 1626. They worked in many different roles: clearing land, building, working in homes as servants, doing laundry, and so on.

The archeological evidence shows that the Africans buried here were often malnourished and overworked. Many died from diseases like smallpox and yellow fever, not to mention outright violence. There was a high rate of infant and child mortality among the enslaved population as well.

When they died, they were not allowed to be buried in the city’s cemetery, so instead a plot of more than six acres was allocated outside the city limits for an African burial ground, though, of course, the city expanded quickly to encompass that land.

Despite their poverty, the community—consisting of both enslaved and some free blacks—buried their dead in a dignified way, in caskets with the head facing west. Some were buried with objects such as jewelry, buttons or shells. The burial ground was in use until the 1790s, when the land was divided up and sold for building lots.

To learn more about the starting point of the slave trade, read my article about my visit to Badagry, Nigeria, one of the “points of no return” for captive Africans.

The very low-key entrance next to the main lobby of the federal building leads first to a security check. This is a federal building, after all, and they can’t just let people walk in freely. The security guards scanned my bag and I had to pass through a metal detector, but they were very friendly. Since it’s a National Monument, admission is free.

The museum inside tells the two parts of the story: about the community that used this burial ground in the 17th and 18th centuries, and about events in the 20th to 21st century: its rediscovery, the protests, the research, and the reburial.

This museum is unusual in that nothing that is displayed is actually authentic. Instead, it tells the story of the people who were buried here and what their lives were like, as revealed by the detailed research on their bones.

Items found in the graves, small things like buttons or jewelry, were also reburied with the bodies. Copies are on display in the museum.

Videos and photos show the ceremonies surrounding the reburial in 2003.

Planning a stay in New York City? Use this link to book accommodations.

Outside the African Burial Ground

Exiting the museum, I walked into the lobby of the federal building to check out the artworks exhibited there. All are related to the African Burial Ground in some way. A casket like the ones in which the bodies were reburied is also displayed.

Beside the building outside stands a memorial to the people buried there. It’s lovely and stark at the same time. First I walked through a dramatic triangular marble structure called the Ancestral Libation Chamber. Its smooth, shiny walls slant inwards, but with an opening to the sky overhead.

The pamphlet visitors receive at the entrance describes this as representing:

…the soaring African spirit and the distance below the ground’s surface where the ancestral remains were rediscovered. . . . Reminiscent of a ship’s hold, the interior is a spiritual place for individual contemplation, reflection, and meditation.

Next, I entered a sunken, perfectly circular space, called the Circle of the Diaspora. A map, engraved in the floor, refers to some of the individuals, not by name, but with phrases like “Burial 210 – man between thirty-five and forty-five years” and “Burial 284 – man between twenty-one and twenty-eight years.” On the walls surrounding the space, symbols are carved that originate in different parts of the African diaspora.

Nearby are a series of seven grass-covered mounds, marking where the bones were reburied in caskets inside seven crypts.

The African Burial Ground National Monument was not at all what I expected going in. I found it fascinating, though, to learn how much detail scientists managed to discover about the lives of these people.

After all, they hadn’t just been buried in a cemetery, but literally covered up by buildings: erased from the history of the city until they were inadvertently revealed. This museum and monument is a respectful acknowledgement of their existence and dignity.