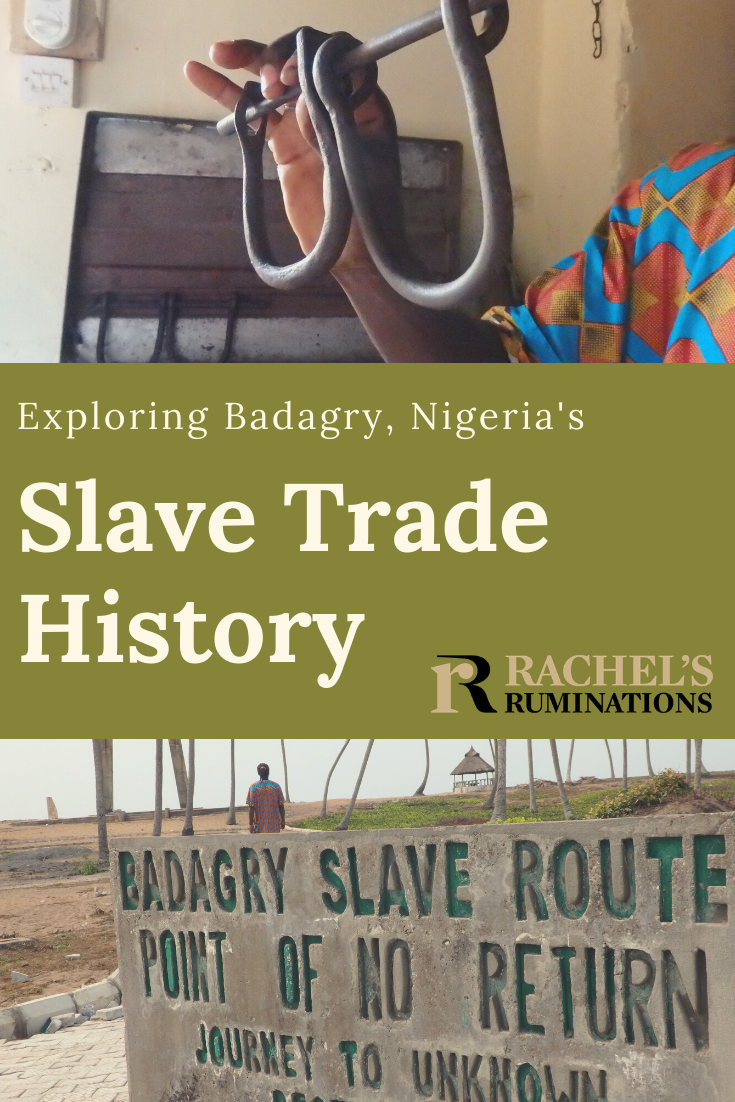 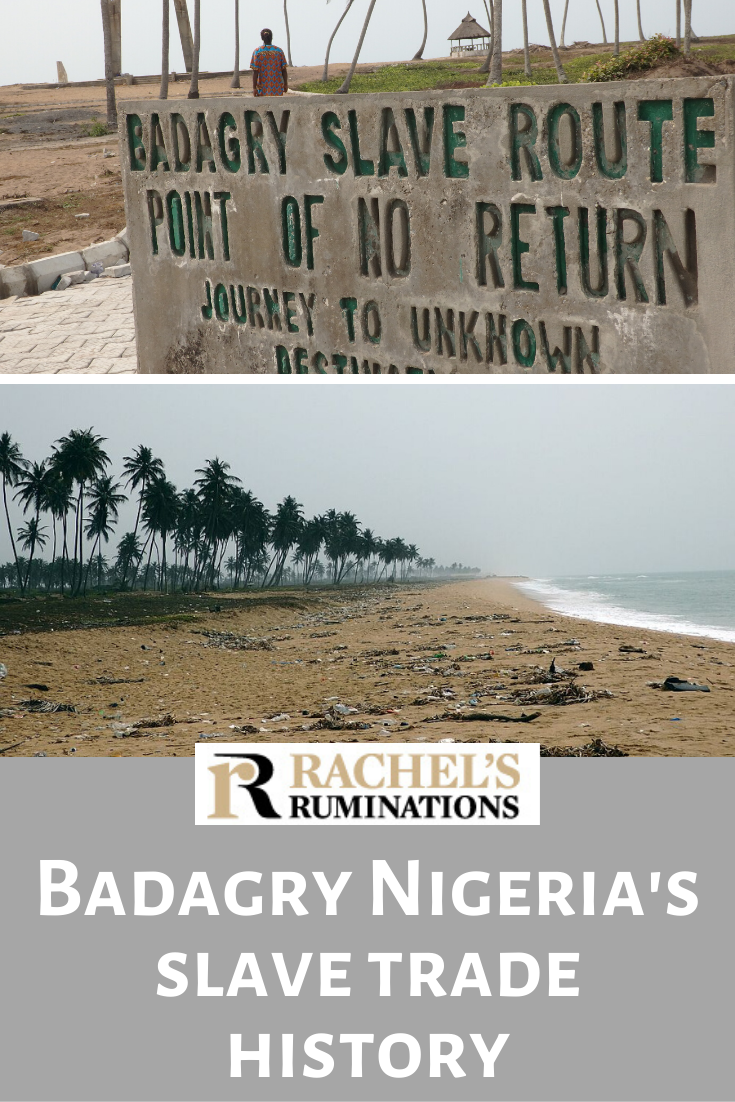 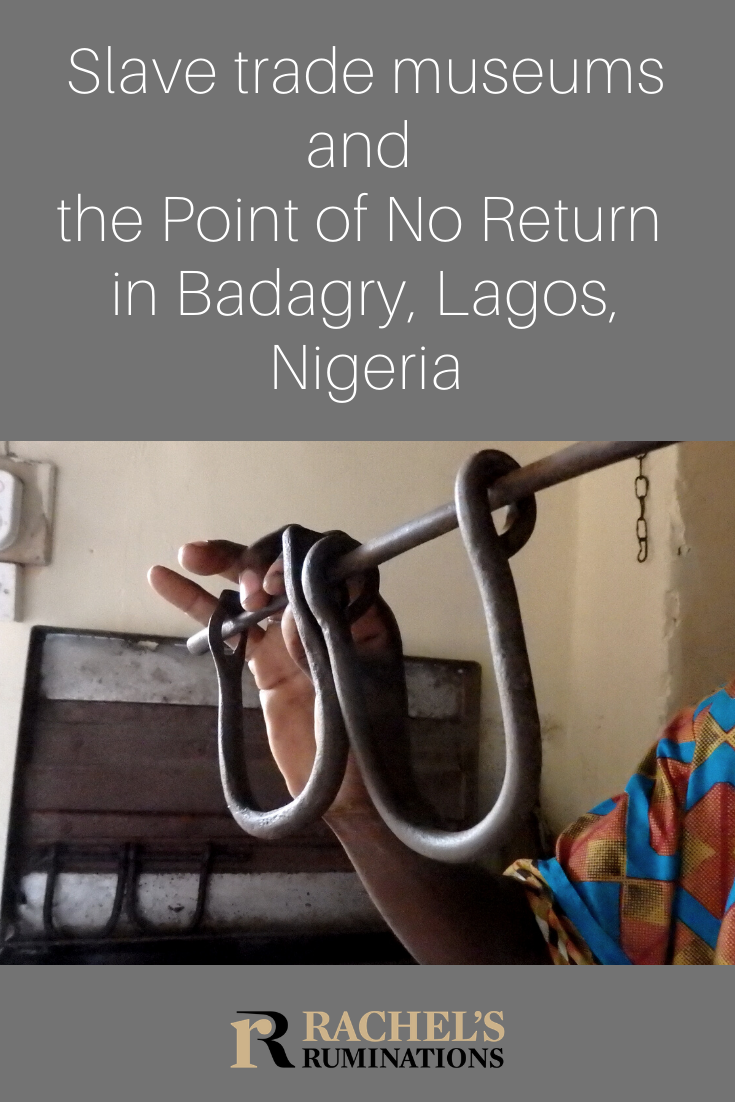 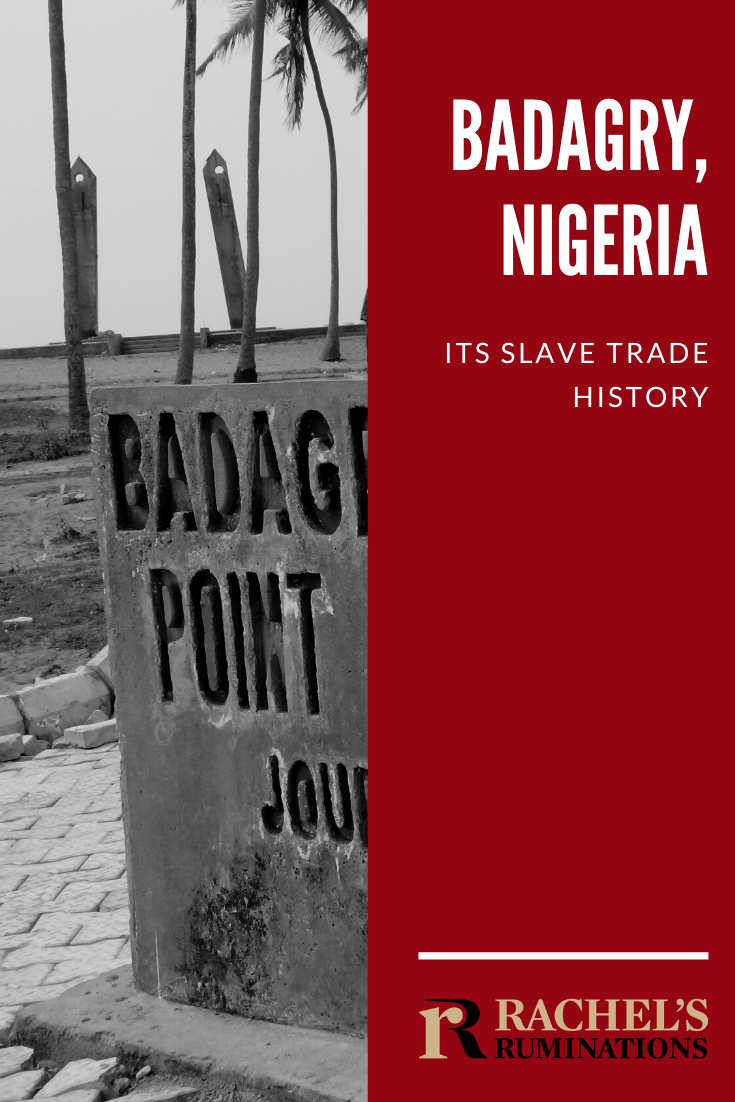 While I was in Lagos for work, I took an extra day to visit Badagry, Nigeria. This town on the east side of Lagos was the “Point of No Return” in the Nigerian slave trade for 400 years. It is now home to three museums about the Badagry slave trade and Badagry history.

We were met in Badagry by our guide, Simon Stone Eyanam, who introduced himself as a reggae musician (You can see him under the name “Cornerstone” in this video.)

Disclosure: This article contains affiliate links. If you make a purchase through one of them, I will receive a small commission.

Our first stop was Seriki Faremi Williams Abass Slave Museum, a “Brazilian Baracoon.” Built in the 1840’s, this was, essentially, a warehouse for storing slaves. Single-story, it is made up of 40 rooms built around an open interior space with a well, still in use.

Each room, about three meters by three meters, originally had only one small window near the ceiling for ventilation, and up to forty men, women and children were locked in there, sometimes for months, awaiting purchase by Europeans who arrived by ship.

The museum itself only occupies a few of the rooms. The first contains some of the instruments used to control the captives: original chains and manacles, for example.

The guide pointed out that most of the African part of the slave trade was actually carried out by Africans, not Europeans. Slavery was already part of the culture when the Europeans first arrived in the 1400s; slaves were captives after wars or they were criminals, enslaved as punishment. At first, the Europeans could just trade for existing slaves.

The increasing European demand was what spurred Africans to continue capturing and selling slaves, which didn’t end until well into the 1800s. A thriving slave auction arose in Badagry, where slaves were exchanged for weapons, alcohol, and other products from Europe.

The second room of the museum is one of the original cells, and it was easy to imagine how nightmarish this would be with only that one small window—still there—and crowded with people for weeks or months on end, without a toilet or other sanitary facilities. Many died before even getting on the ships to be carried across the Atlantic.

I can only imagine how that period of imprisonment under such cruel conditions would break the captives’ spirits, if they survived.

Another room gave information about Seriki Williams Abass, the owner of the “baracoon.” Ironically, he had been a slave himself, brought to Brazil to be a domestic slave. He had been taught to read and write, which allowed his owner to send him back to Africa, where he worked with his former owner as a slave trader. Even after the slave trade ended, he was a prominent and respected chief in Badagry.

Our guide told us of the intention of the Nigerian government to convert the entire former “baracoon” to a museum, but for now it’s occupied by local families, who will eventually be evicted to accommodate the museum. They still use the original well for their water needs. The building is owned by descendants of Abass, so it is, for the moment, a private family museum. In the courtyard stands his tomb, along with the tomb of one of his many wives, presumably the first, or perhaps the favorite.

I found it interesting and a bit puzzling that he is still honored in this way by his family.

We passed two cannons on the way to the next museum, just around the corner. According to our guide, a cannon was worth one hundred slaves, while a bottle of liquor was worth ten and a gun was worth thirty.

Another museum, called Mobee Slave Relics Museum, also addresses slavery, and is, like the Abass museum, family-owned by descendants of a traditional chief who was a prominent slave trader. This one was High Chief Mobee, and I enjoyed the irony of his epitaph in this museum:

Just? An African who enslaved other Africans for sale to Europeans?

This museum consists of just one room, and the man who explained the objects around the room to us was, I think, a member of the family. He showed us the noisemaker that was used to announce the arrival of the chief, as well as telling us pretty much the same story of slavery that our guide had already told us. Like the other museum, this one has artworks illustrating how the captives were treated, and examples of chains and other implements of enslavement and torture.

The contrast between the lesson of these two museums – that slavery was nightmarish for the captives – and the evident pride and profit in being descendants of prominent slave traders is something that neither museum addressed directly. I found the conflicting messages striking.

The Point of No Return in the Badagry slave trade

When the European ships arrived, the slaves were taken out of the jails and chained together single-file, except for children who were chained to their mothers. They were taken by boat to Gberefu Island, just across a small distance of water. Originally the slave traders used a traditional wooden canoe, but we crossed in a small motorboat with a dodgy motor.

Arriving on the island, the slaves were marched on a narrow path through a forest across to the ocean side of the island. It’s not far; I’d guess we walked a kilometer or so. Today it’s a scrubby, sandy path, and I found it difficult because of the heat and the deep sand. For the captives, it would have been a hundred times worse: weakened by their captivity, they were carrying the extra weight of the chains that bound them together and the fear and despair they must have felt.

We passed a “spirit well” on the path. This well was believed to cause anyone who drinks the water to forget their past. The captives were forced to take a drink before reaching their destination.

The path ends at the “Point of No Return” on a long straight beach lined with tall coconut palms and, when I was there, considerable surf. The captives were loaded again onto small boats to be taken to the ocean-crossing ship moored off the beach.

A memorial, a beach and tourism in Badagry

The history of this place is shameful and heart-breaking. In any form it would be difficult to convey the magnitude of suffering caused by the slave trade for 400 years. Unfortunately, the Point of No Return doesn’t manage to express its significance clearly enough.

A memorial marks the spot where the slaves finished their walk across the island, though it does not appear as originally intended. The two vertical pieces, leaning inwards, were meant to represent a man and a woman chained together, but the salt water has caused the chain to disintegrate and fall off the monument.

That disintegration is indicative of the state of the place as a whole: neglected. Between the memorial and the beach, for example, a start was made at building a larger, better memorial, but it appears to have been abandoned, leaving only the foundation.

Putting aside the history of the place, the beach itself should have enormous potential for tourism. On the day we visited, it was completely deserted as far as I could see in both directions, and those coconut palms are lovely lining the beach. Yet the sheer quantity of trash strewn absolutely everywhere was disheartening.

Set back behind the line of palm trees to one side of the wide path are the hulks of several small vacation homes. I say “hulks” because the houses were started four years ago, according to our guide, but never finished.

The same goes for the path itself. A scheme at some point in the past intended to make the memorial accessible also for the disabled or elderly, which would require a better surface than the deep sand we walked through. Only about the last one or two hundred meters has actually be paved with bricks.

Book your hotel in Lagos using this link!

Many people, nevertheless, do visit the place: mostly Nigerians visiting their own history, and often school groups too. If the local government is ever going to get foreign tourists to come here, though, they’ll have to invest considerable funds to make it accessible and worth the trip. (And that’s putting aside all the other reasons foreigners don’t visit Nigeria: corruption; crime; inflation; and their fear of Boko Haram, despite the conflict’s distance from Lagos.)

Other things to see in Badagry

A few other sites in Badagry are worth visiting, though we could only see exteriors because we visited on a Sunday. The first storey building in Nigeria, built in 1845, can be viewed. The Badragry Black Heritage Museum, in a beautiful 1863 colonial-era building, originally a district office, serves as a more general slave trade museum. It houses more information on the slave trade and the rest of the history of the people of Badagry. We also peeked over the wall into the missionaries’ cemetery; it is as neglected-looking as the Point of No Return.

A trip to Badagry, Nigeria

I think it’s safe to say that Badagry is very off-the-beaten-path, and, given its minimal level of development for tourism, I certainly wouldn’t recommend going out of your way to see it. The still-standing slave forts of Ghana would be a more natural choice to explore the history of the slave trade.

However, if you are going to be in Lagos anyway, as I was, it’s worth a visit, both for the adventure of driving there (see my post about driving in Lagos) and for exploring Badagry’s remaining slave trade relics.

I can’t give much advice on how to get there; the school where I led a workshop provided me with a car, a driver and a security guard. I’d suggest doing the same: getting a car and driver; take local advice about whether the security guard is actually necessary. Taxis are available; ask at your hotel. There is also public transportation of a sort; I saw plenty of small vans on the road, but I have no idea how you’d get from central Lagos out to Badagry with them.

The drive took us more than two hours in each direction, so I’d suggest putting aside a whole day for the trip if you’re getting there from central Lagos. Google shows it, as I check now, midday on a Monday, as 66 kilometers from central Lagos taking 2 hours and 42 minutes.

Details of the 3 museums