Lagos isn’t your usual tourist destination and, indeed, I didn’t go there as a tourist. I had agreed to lead a workshop at an International Baccalaureate school for two days. If I was going to fly all the way to Nigeria, I figured, I should at least stay one extra day and see something. 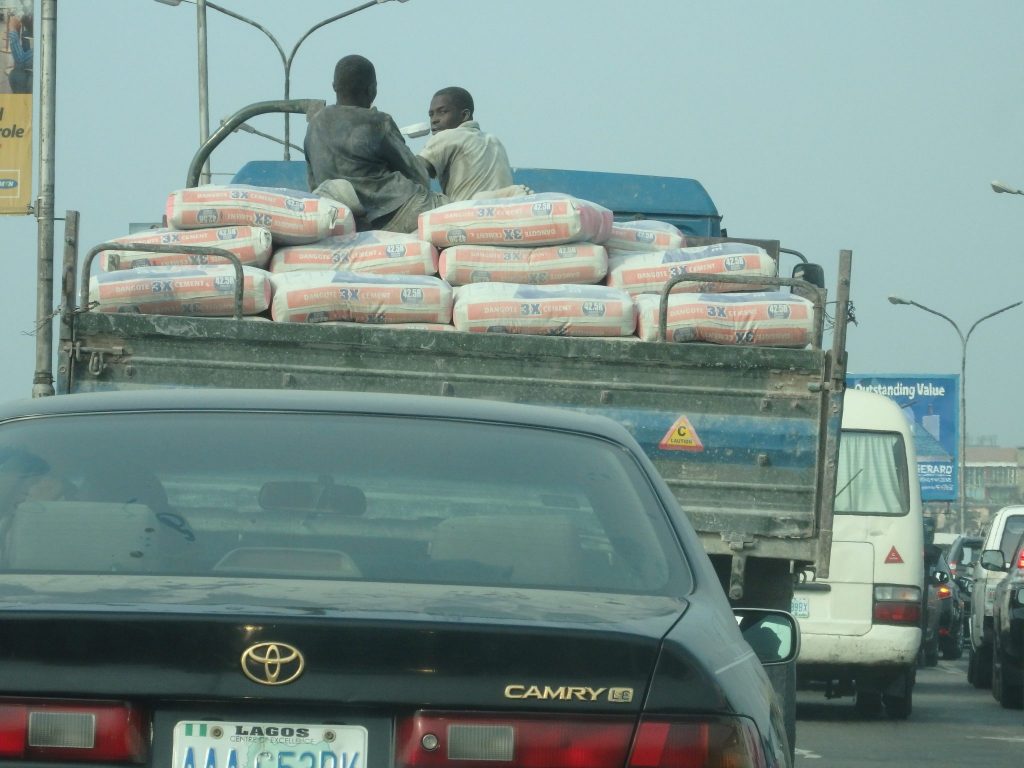 My view of traffic in Lagos

After a brief on-line search, I decided to visit Badagry, Nigeria’s equivalent of Elmina and Cape Coast in Ghana: places where slaves were collected and held, and where the Europeans arrived in their slave ships to take them away to the Americas.

While tour companies offer excursions to Badagry, I was fortunate enough to get a car, with a driver and the school’s head of security as travel companions, from the school. They picked me up at my hotel at seven in the morning, and we set off.

Badagry is listed as being about an hour away from Lagos, but it ended up more than two hours each way. There were two reasons for this. First, an hour away from where? Lagos is a huge, sprawling city of about 22 million inhabitants. According to my travel companions, Badagry isn’t even outside of Lagos; it’s within the city boundaries. And yet it took us two hours to get there. (I think they might have meant that Badagry is in the state of Lagos, rather than the city.)

I’ll tell more about Badagry itself in a separate post. For now, I’d like to tell about the driving itself.

The Roads in Lagos

The other reason for our slow progress was the state of the roads. Some sections of the highway are in good shape, with two or three well-paved lanes each way. Some sections, however, are more pothole than pavement. And when I say “pothole”, I really mean that the pavement abruptly ends, causing drivers to slow to a crawl in order not to break axles going into or out of these asphalt-less sections, which are considerably lower than the pavement itself. You can get an impression of these in this short video:

Traffic also slowed our progress, especially when we went to and from the airport. On that route, the road is a highway, marked with lanes, which often are completely ignored. Three lanes generally become four, and my driver seemed particularly adept at creating extra lanes. Passing on the right is perfectly acceptable, and drivers honk often, not in anger but more to let other drivers know what they are doing: “I’m coming up on your right in a lane that doesn’t even exist! Please watch out!”

Sometimes and in some places, the sheer volume of vehicles forces everyone to slow to a crawl, even where the pavement is good.

Nevertheless, driving in Lagos—on the outing to Badagry and on my trips to and from the school—is fascinating. Passing markets and residential areas and industrial areas meant I could study the city’s life to my heart’s content because we moved so slowly.

In the more central, more crowded part of the city, buildings are close together and every bit of space is used. Further out, buildings sit apart and their lots are away from the road, often delimited by a wall around the property line. In some places the land between buildings has been planted with cassava or covered with shanties made from scraps of metal and wood. 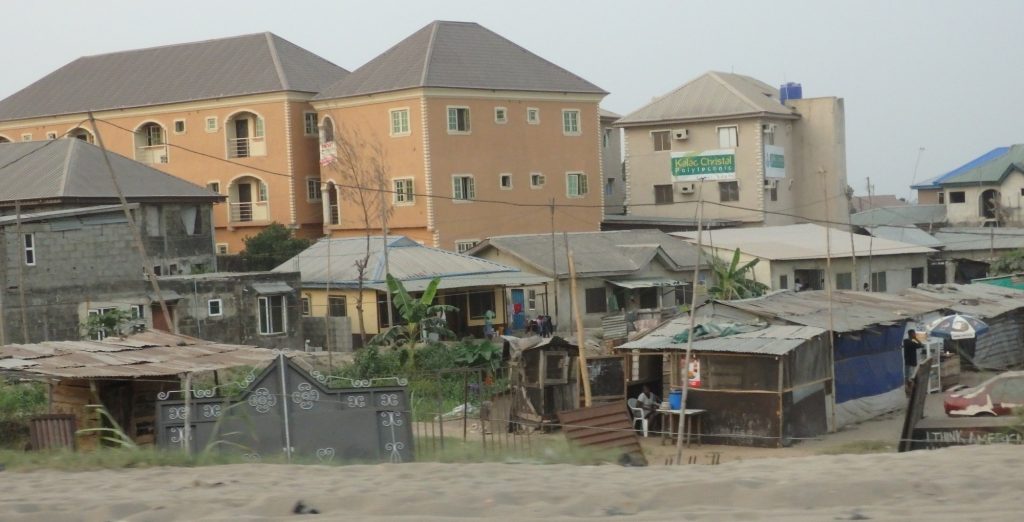 Here you can see recently-built apartment blocks next to small permanent single-family homes next to makeshift shanties.

Outside the center, where there is more space, haphazard, makeshift buildings fill the space between the road and the walls along property lines: shacks, essentially, made from bits of wood or corrugated iron, though some seemed more solidly built. Most of these do not appear to be homes, like the shantytowns I glimpsed on vacant lots here and there. These are shops, with open fronts to display items for sale. 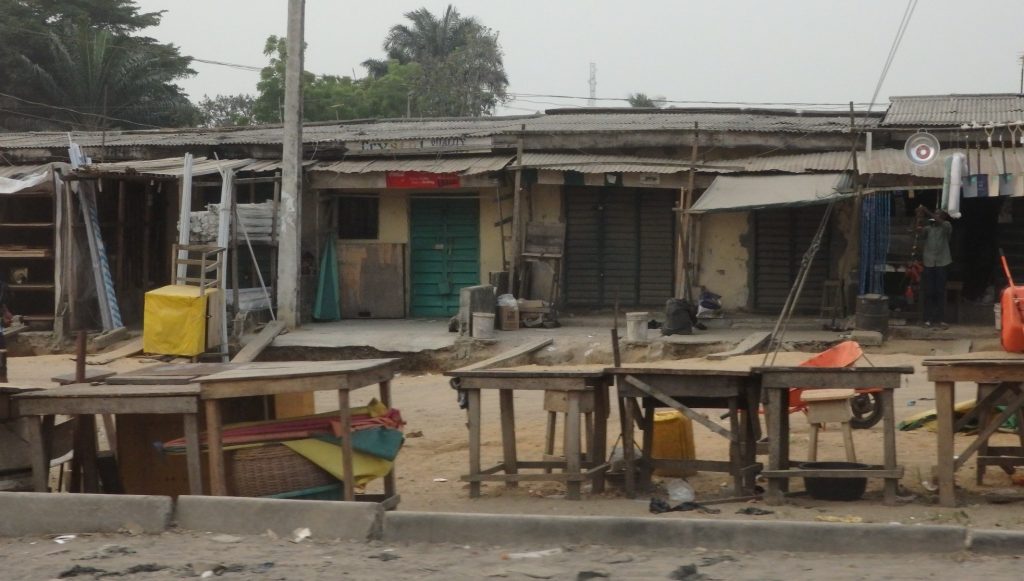 a typical row of shops, many closed since it was a Sunday morning

Besides the general chaos of the traffic, activity along the roads mostly involves commerce: women buying and selling in busy market stalls, young men with motorcycle taxis, waiting for clients, furniture makers displaying their products, hawkers braving the highway itself to sell small snacks through car windows, women carrying goods on their heads, shoppers heading home from work after buying their provisions for dinner. 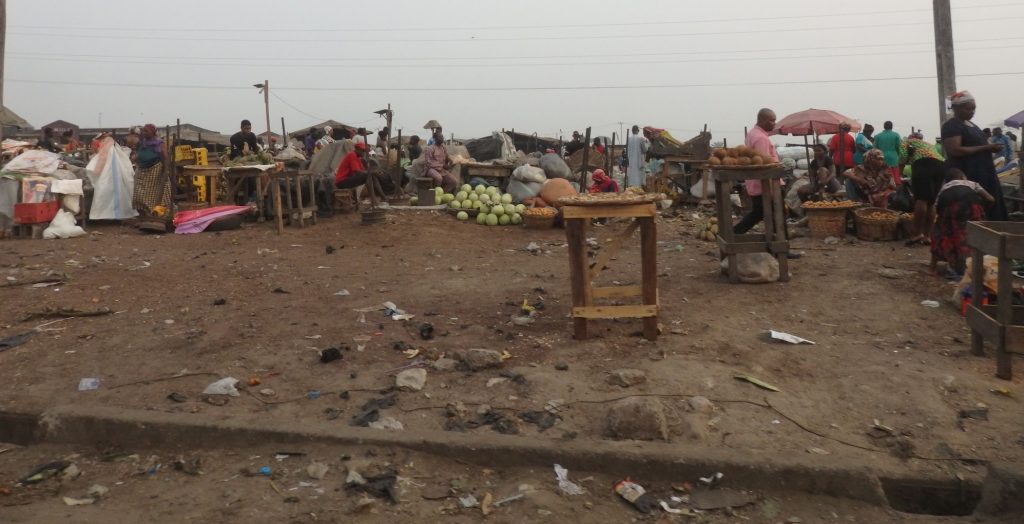 an informal market by the roadside in Lagos

While many people wear western clothing, some women wear brightly-colored traditional Nigerian dresses. I spotted quite a few men in traditional clothing too: either matching shirts and pants in the same brightly-patterned cloths as the women, or in long, plain boubous.

a woman in Nigerian dress

Everything and everyone is covered in a thick layer of dust: the sides of the road, as well as the big sections where the pavement is gone, are all sand. Presumably this will turn to mud when the rainy season starts soon. The center “divider” is a strip of sand as well, several meters wide, and in the busier business areas people use that space as well for buying and selling, or just for sitting.

Garbage is everywhere: plastic bottles and other bits of plastic, mostly. It litters the road and the paths beside the road. It accumulates in heaps in the markets. I did spot one garbage truck in three days of driving around the city, but clearly garbage collection is an issue in a city this big and this poor. 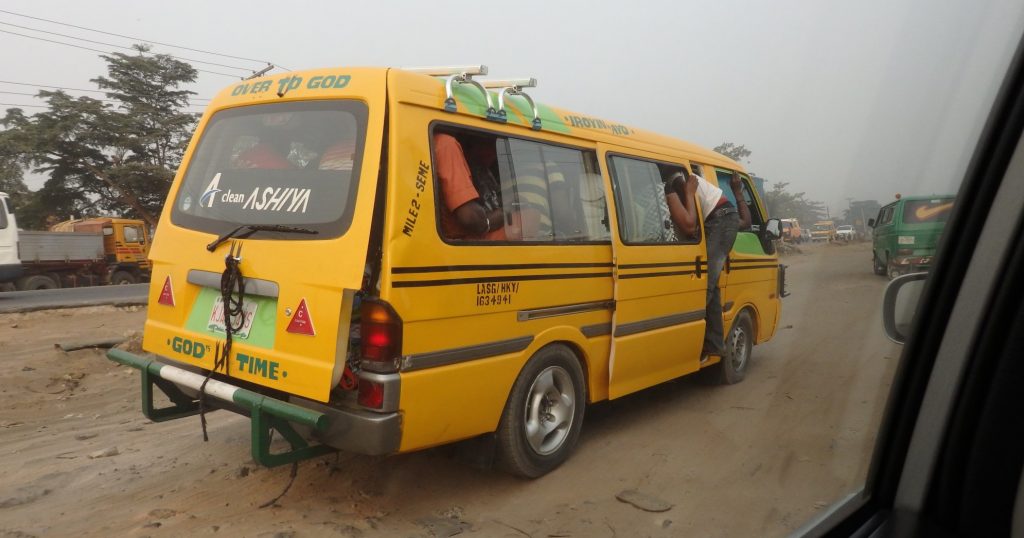 trying to fit just one more into a van

Many of the vehicles on the road are vans, used as buses, crammed with people. Some are bright yellow “tricycles,” an open-sided, three-wheeled motorized vehicle used as a taxi. 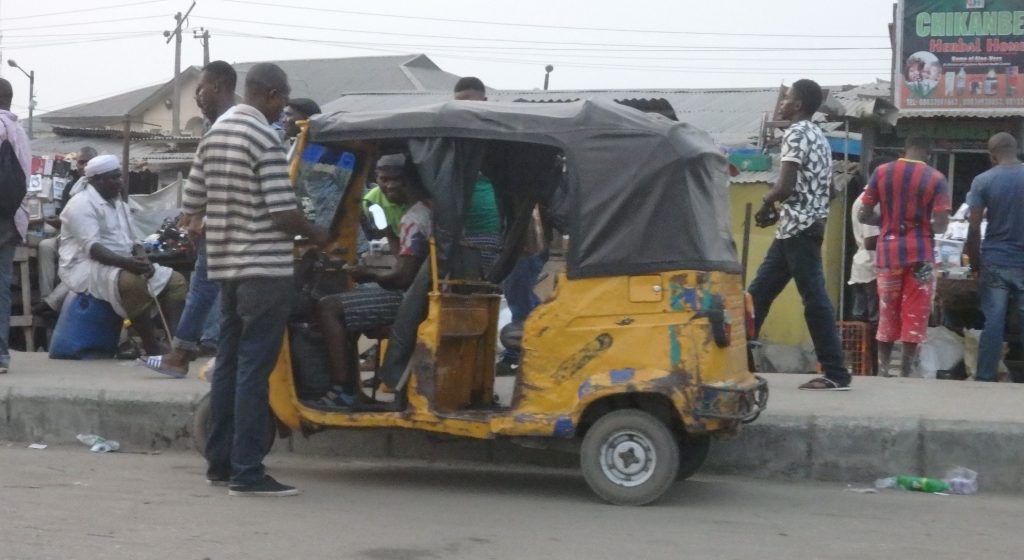 Every few kilometers, where the vans and tricycles stop, so does the traffic, because the vans take up lanes of the road, though no one seems particularly upset by it. Those spots are the busiest. Hawkers converge on the stopped cars as well as the vans. Men shout loudly and repeatedly, trying to find more customers for their vans. Customers negotiate back. Ramshackle market stalls sell fruit, small bags of water and other small, cheap products to travelers. 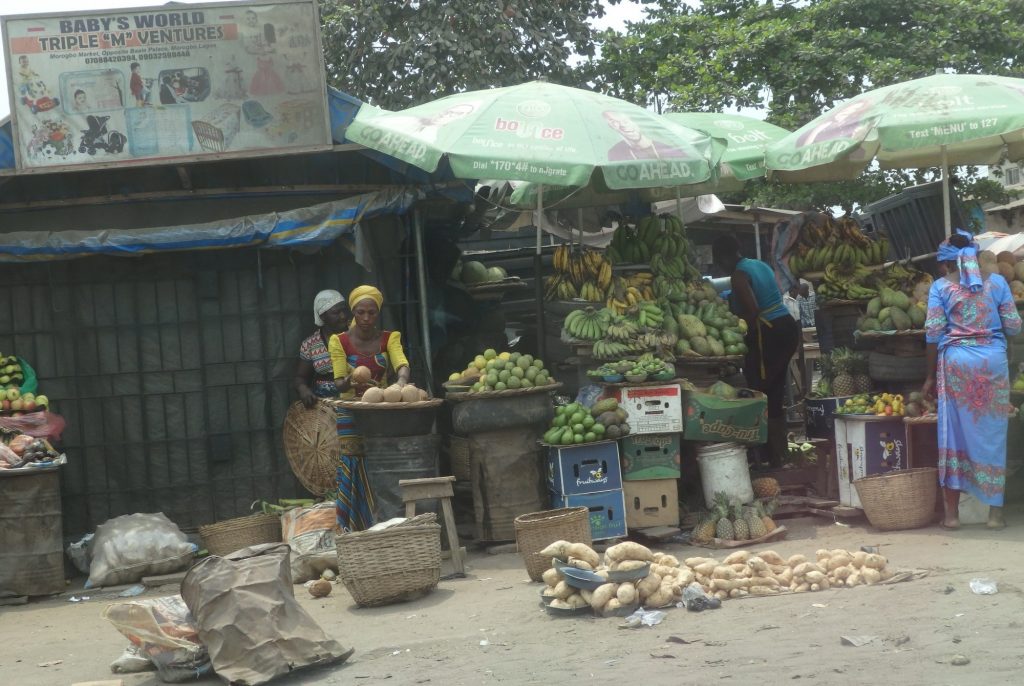 informal market stalls along the road

The cleanest, most modern buildings we passed are gas stations and banks. Housing, besides the clusters of piecemeal shanties on vacant bits of land, seems to mostly be in apartment blocks, some in better condition than others. Stalls have been added to many of the buildings on the ground floor, appearing as much of a mish-mash as the shacks of the markets and the shantytowns. 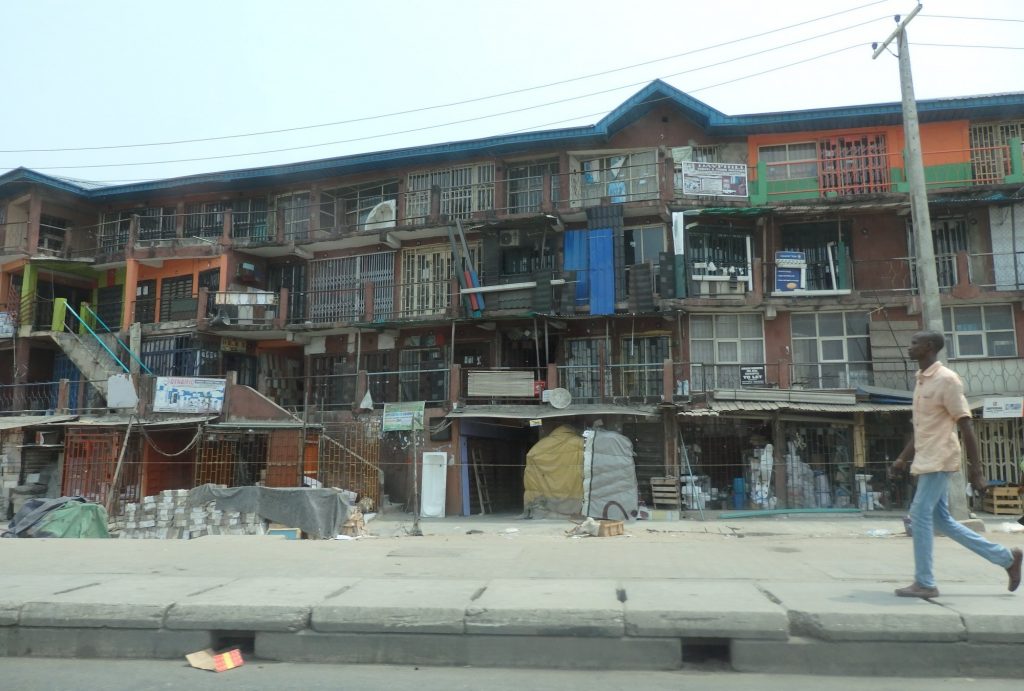 I’m not sure, but I think this building is a shopping mall, rather than housing.

I saw many churches of various denominations, most of which I’d never heard of. Mostly they are as shabby as the market shacks, with nothing but a hand-painted sign to show it’s a church. A few times I spotted a mosque, and these seem more substantial buildings than the churches.

Badagry itself is smaller scale in general: more like the small town it once was. Low-rise buildings and shops line the streets, which are narrow, compared to the multi-lane roads we drove for the rest of my visit.

A shopkeeper and her shop in Badagry

My overall impression of Lagos was of chaos, but also of industriousness, aspiration, and true capitalist spirit.

Have you ever been to Lagos, or another city that my description reminds you of? Add a comment below!