I like parks as much as the next person, but when I travel they’re not high on my list. I might pass through a park on the way to something else I want to see, or I might do a bit of people-watching in a park long enough to eat a sandwich, but that’s about it. They don’t interest me much.

The High Line, however, is a truly extraordinary park in New York City, and I’ve visited it on both my last trips there.

The High Line was originally a railway line, opened in 1934: a cargo line that once served the meatpacking district in lower Manhattan. For more than twenty years (1980 to 2006), its elevated length was simply abandoned, and gradually became overgrown with weeds.

In 1999, Friends of the High Line started a project to transform it into a park—up above street level, which is what makes it extraordinary. 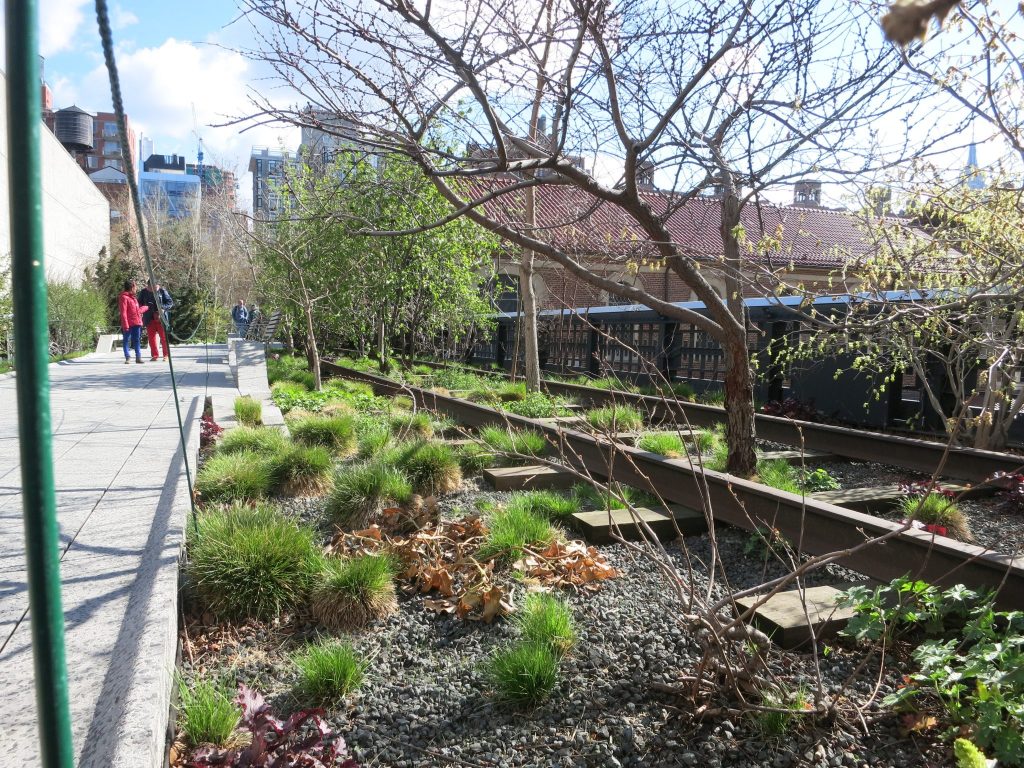 a view of a section of the park, where you can see the train tracks among the plantings

The design, for one thing, is lovely. The original tracks are incorporated into it, dotted with plants and trees, and park benches seem to rise organically from the walking paths. In one part of the route, the walking path is elevated above the track level, which allows for a mini-forest to grow undisturbed. The trees are still relatively young and small, but the “land” around them was covered with old leaves when I visited in the spring. 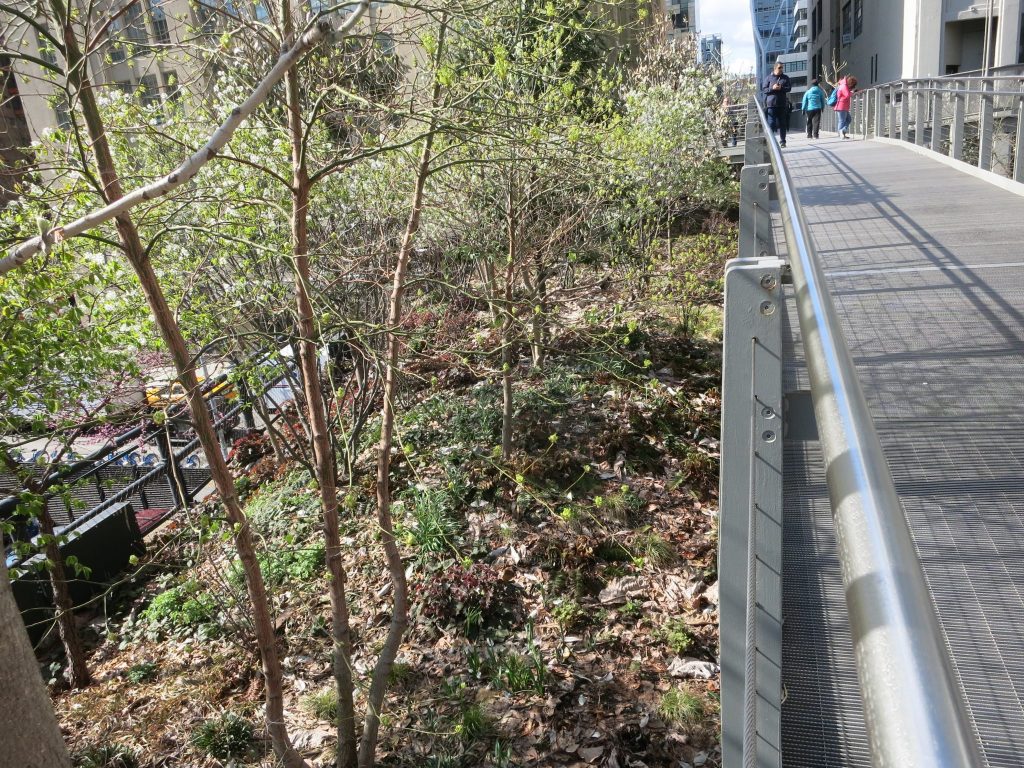 Here you can see where the walkway is raised above the track level, allowing the trees to grow undisturbed.

In other places the “ground” is carefully manicured, with lines of small shrubs, but presumably these will fill out eventually. The plantings were chosen for their hardiness, and in many cases are the same plants that self-seeded in the years that the railway was abandoned.

The line extends from Gansevoort Street in the Meatpacking District to 34th and 12th Avenue in the Hell’s Kitchen neighborhood, about 1.45 miles (2.33 km) away. Stairways allow access at different points along its length.

I still haven’t managed to walk the whole length of it, though. The first time I went, in 2013, they hadn’t completed the last section of it, where it turns on 30th Street, so it wasn’t open to the public. This time, the same end of it was closed temporarily so some enormous quantity of soil could be lifted onto it with a crane. 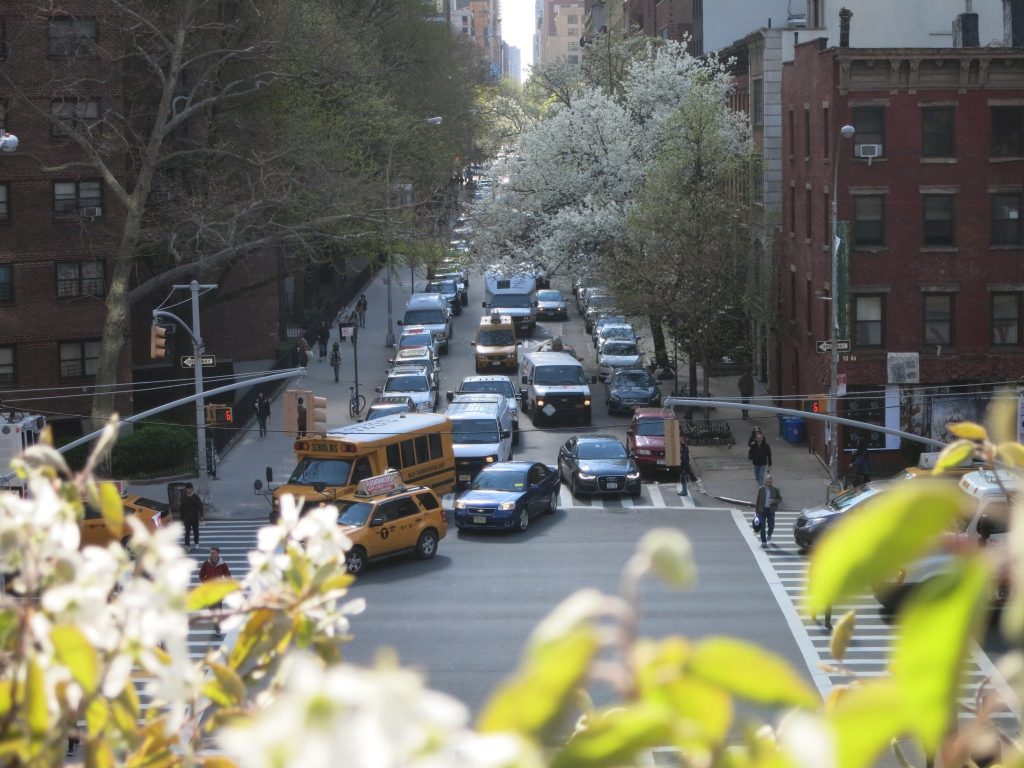 A view from the High Line

Nevertheless, it’s a fascinating walk. In some places the buildings extend over the park. In others, there are overlooks where you can stop and take in the views. These aren’t the epic views of further uptown, full of skyscrapers. These are more focused views: an ordinary intersection or a row of buildings or a glimpse of the Hudson River. That kind of view makes you notice details more, like the way the trees were flowering when I was there, or how the traffic moved—or didn’t move—through intersections, or the assortment of small businesses on a side road. 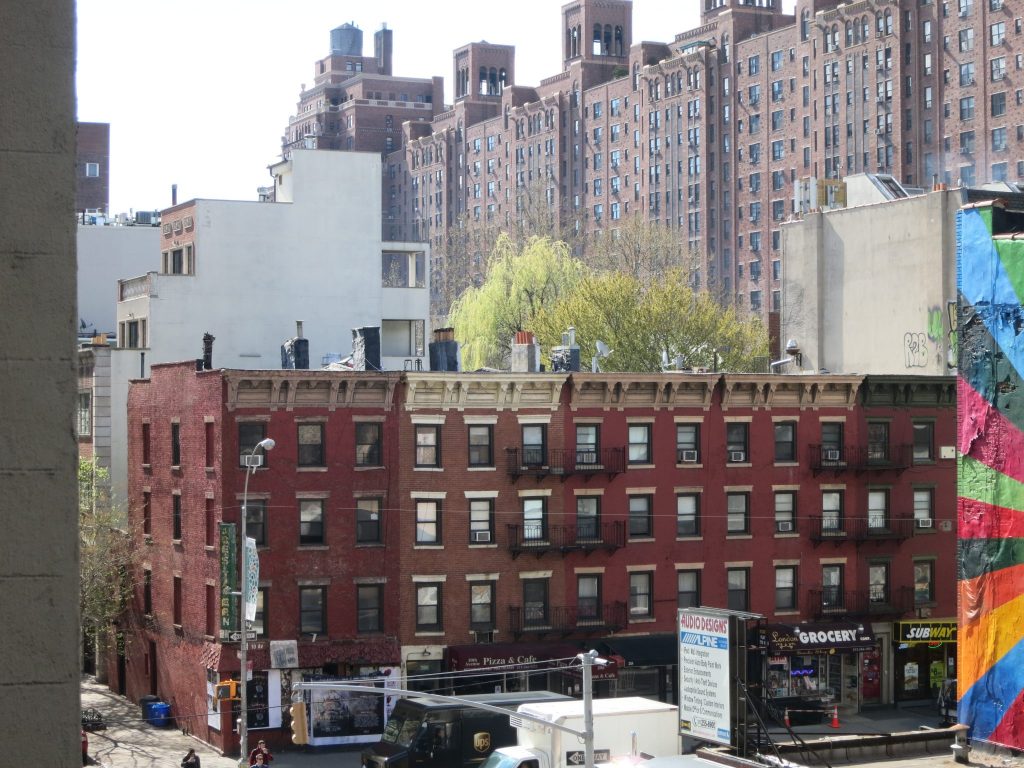 I liked seeing the variety of architecture in this part of the city.

I walked in the Meatpacking District to get to the southern end of the park, and that area shows some fascinating contrasts even before you climb the stairs to the park itself. The old meatpacking industries are still there: small, simple warehouses whose fronts are nothing but loading platforms, where men busily heave boxes of, presumably, meat onto small trucks to supply the whole metropolitan area. But cheek by jowl with these old warehouses are new chic businesses in what used to be warehouses: designer shops, painfully stylish cafes and so on.

Clearly, the arrival of the High Line has contributed to this gentrification. I saw one newly-built apartment building overlooking the park with outrageous prices, for example. 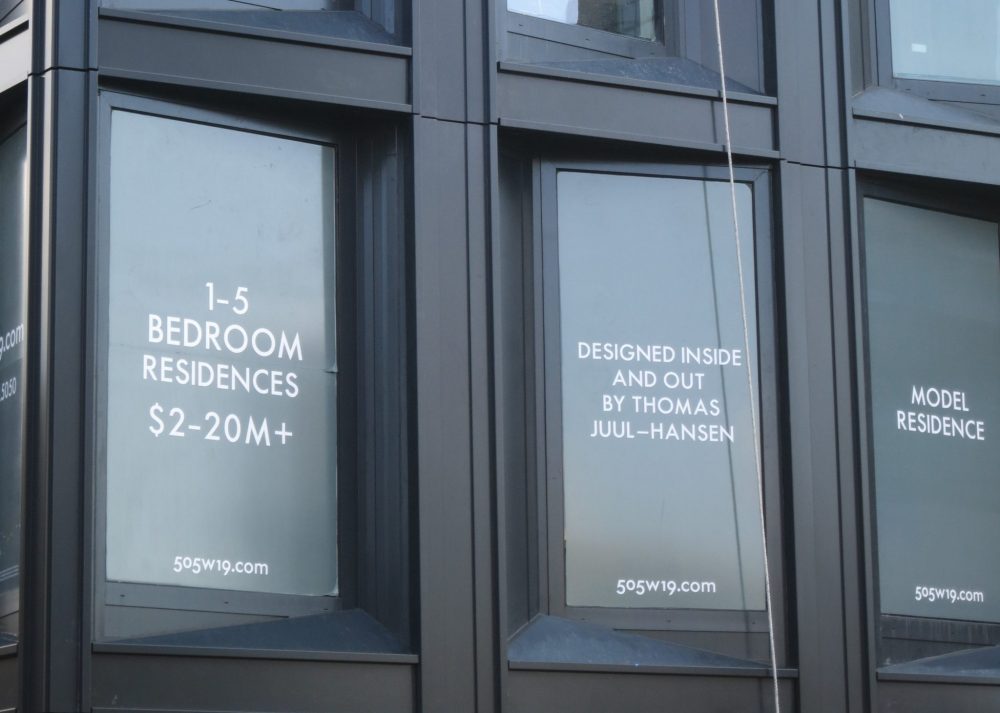 Spotted next to the High Line. That means a one-bedroom apartment is $2 million?

Despite the extreme example of gentrification, I think other cities could learn from this park. Of course, unless they happen to have a derelict elevated railroad track available, it’s not practical in the same form. However, there are roads in many cities that are practically abandoned. They’re off the commonly driven routes, or include sections where the local shops are dying because the shoppers have moved elsewhere. I can imagine that this kind of landscaping—making it into a real park, rather than just a pedestrian street with a few benches and potted plants—could revive many down-and-out areas just by becoming places where people want to be. Anybody interested?