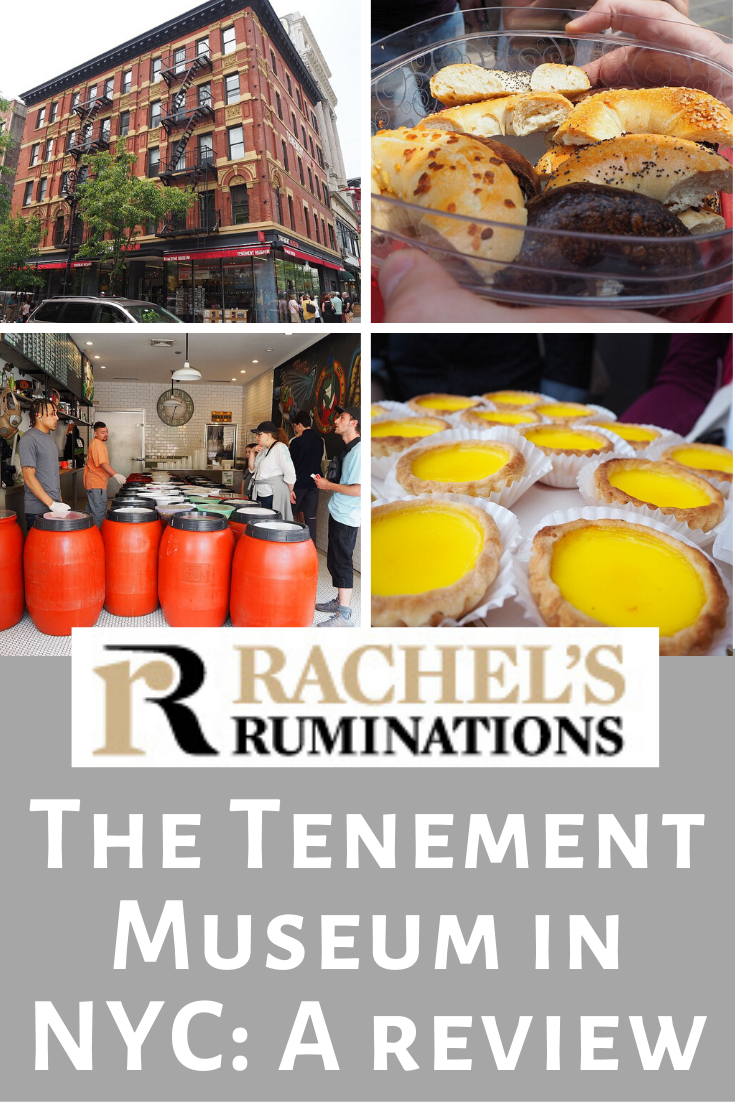 Back in 2013, I visited the Tenement Museum in New York City’s Lower East Side and loved it. When I visited again recently for a different tour, well, I didn’t love it. This article combines both reviews, with updated museum information.

They came for the same reasons as the rest of the many thousands of Jews who emigrated at that time from Eastern Europe: persecution was increasing, with regular attacks by soldiers or civilians on Jewish villages. That, combined with the lure of a better life in the US, led my ancestors to leave.

Many of these immigrants arrived in New York City, and flowed into the growing Jewish community on the Lower East Side of Manhattan. Their neighborhood became the center of a thriving garment industry starting from the mid-1800s. This isn’t what my grandparents did; some of them sailed into Boston, rather than the more common arrival point of Ellis Island in New York, and the others went to New Haven, Connecticut, after arrival.

Disclosure: I was NOT sponsored in any way on either of my visits to the Tenement Museum.

The Tenement Museum itself is a tremendously interesting and well-presented museum that is well worth the admission price.

It’s not a museum in the traditional sense of the word: a place where items of interest are on display in glass cases and visitors wander around to see them at their own pace.

Instead, the Tenement Museum consists of a single tenement building, one which was boarded up and left untouched for decades, so that it became a window on what life in that building must have been like for the immigrants who lived there in the late 1800s and early 1900s.

After years of research, including counting layers of wallpaper and linoleum, census searches, and so on, the apartments were furnished with period objects and set up as the apartments would have looked back then. The peeling wallpaper and cracked paint have been left as is, and the overall effect makes the lives of these immigrants visible and understandable.

Visitors are not left to wander around and read informational signs posted next to relevant objects. Instead, a guide takes groups through the building – on our tour, about sweatshops, we saw only two of the apartments – telling the fascinating story of one particular real-life family who lived in that apartment at a particular moment in its history.

All of the visitors in our group were Americans, all children of immigrants, and, although my ancestors were not part of this New York garment industry, the people who lived in this tenement were so much like my ancestors that I could easily picture them there.

The objects in the rooms were objects my grandparents would have had – there was even a set of candlesticks for Shabbat candles that were almost exactly like one I have at home from my grandmother – and their hardships were hardships my grandparents would have faced as well. They didn’t speak the language; they needed a job, no matter how backbreaking it might be; they had to care for children in poor, unhygienic, overcrowded conditions; and they aspired to a better future for those children.

Our guide was a young woman who could tell a good story, and she was very open to discussion. I was particularly fascinated by the question of assimilation: did the immigrants keep speaking their mother tongue, in hopes of keeping their traditions alive for their children, or did they switch to English only, change their names to something more pronounceable in English, and generally do everything they could to assimilate? Did they work on Saturdays – the Sabbath day for Jews – because they needed the job? Or did they start their own little sweatshop in their living room in order to make their own hours, so they could work on Sunday rather than Saturday?

If you’re planning a trip to New York City, check out my article “New York City on a Budget: Free or cheap things to do“!

My life as an immigrant

It’s not surprising that the tour made me think about my life as an immigrant in the Netherlands today. My immigration story is immeasurably easier than these immigrants on the Lower East Side, with my white privilege and general prosperity and a husband who speaks Dutch to help me navigate the complexities of Dutch bureaucracy.

These immigrants had to cope with coal stoves and a water pump in the back yard (and carrying coal and water up several flights of stairs many times a day), as well as tiny accommodations shared with a sweatshop for perhaps 60 hours a week. The level of prejudice against immigrants was high, and the Jews and Italians who we learned about on the tour were not considered white at the time, at least not while they had accents and dressed “foreign.”

Nevertheless, this question of assimilation is the same. How much do I assimilate and “go Dutch”? How much do I hang on to my American way of looking at the world?

And in any case, putting mayo on my fries doesn’t make me Dutch. It’s the deeper cultural elements that change more slowly: the ways we look at the world, the assumptions we make about how the world should work. The polder model of decision-making, for example, is the idea that everyone in an organization can have a say in any decisions that are made. It makes for a very slow decision-making process, but also creates consensus. My American, top-down, assumptions about decision-making can sometimes clash with this model. This kind of cultural element takes much longer to change than the more visible, surface ones involving clothing, food and so on.

And the limits of assimilation are never fully defined, or rather it can take generations. My grandparents, raised in Eastern Europe, were Orthodox Jews. My parents rejected that orthodoxy and became Humanistic Jews, still part of a Jewish community but certainly more assimilated into the larger American culture. I don’t belong to any Jewish community, though I still think of myself as Jewish. My guess is that the same sort of assimilation has happened to the families of those immigrants we heard about on the tour.

Several years after I visited the Tenement Museum, my sister and I returned again, this time for a walking tour: “Foods of the Lower East Side.” This tour wasn’t, in my view, the same quality as the museum itself.

The Lower East Side has been home to a succession of different immigrant groups: German immigration in the mid-1800s was followed by Italians and then Eastern European Jews, then various other groups from Eastern Europe into the early 20th century. Later in the 20th century it became more diverse, with African Americans, Puerto Ricans, Dominicans and more moving in. Nowadays it’s still very diverse, and various Asian groups have joined the mix.

So I expected the tour to be about these groups, and we’d taste the foods that each group had brought with them, one at a time.

The tour certainly mentioned the different ethnicities, but it wasn’t what I had hoped. While the guide was very personable and knew the neighborhood’s history, he didn’t present the history in a logical way so that it told a story.

Instead, we went from location to location, visiting a series of small businesses, most of which had long histories in the neighborhood. At each stop, the emphasis was more on the history and food of the individual businesses rather than on how they fit into the longer-term sweep of Lower East Side history.

We didn’t actually enter many of the businesses either. Instead, we stood outside in a small cluster and the guide’s colleague went inside to pick up the food we were going to taste.

To me, that was a missed opportunity, especially at a stop like The Pickle Guys, where a large variety of pickles are displayed in big vats inside the store. I would have liked to go in and peer into some of those vats, rather than just peeking in the doorway and tasting a few pickles outside on the sidewalk.

At Russ & Daughters Cafe ( or rather, outside it) we tasted bagels. This business, and more recently, this restaurant, date back a hundred years and four generations, and the bagels are top-notch (and I know bagels!). The founder of the business was a Jewish immigrant from Poland who built the business on traditional Jewish foods like herring, smoked salmon, bagels and bialys.

We did walk through the Essex Street Market, a community market that dates back a hundred years. Originally an outdoor pushcart market, it’s not really a street market anymore: in 1940 it moved into a red-brick building on the corner of Delancey and Essex and just this year added a new brightly-painted low building nearby. It’s full of all sorts of interesting stalls with foods from around the world.

At another stop, Grand 1 Bakery, we ate egg custard tarts that were excellent. It’s a Hong Kong-style bakery, but I never got a clear idea how people from Hong Kong came to the area or why or when.

If you’d like to learn more about the Chinese immigrant experience in America, read my article about MOCA New York City (Museum of Chinese in America).

We stopped at several more places: a candy story run by Greek Jews since the 1940s, an Italian food shop, a Chinese dumpling shop, and a few more.

There’s no doubt that the Lower East Side teems with interesting places to eat or buy ingredients, stemming from dozens of different ethnic traditions. Add to that a visible gentrification, and this area is foodie heaven.

Nevertheless, given that the tour operates out of the Tenement Museum, it seemed to me to miss that important historical storytelling element. However, I’m not sure if my poor review of the tour is because it just didn’t meet my expectations or because it was a poor tour. I just don’t know.

In any case, it sounds like some of the other walking tours would have suited me better. The tour “Building on the Lower East Side” looks at the design and use of buildings in the neighborhood. “Then and now” sounds like the straightforward historical tour and “Outside the home” covers historic buildings and the events that happened in them.

The Tenement Museum: 103 Orchard St., on the corner with Delancey St. The Visitors Center entrance is on Delancey.

Apartment tours: The museum can only be visited via a tour, which lasts 1-2 hours, depending on the topic of the tour. It offers 5 different apartment tours, which must be booked ahead of time on the Tenement Museum’s website. Tour price ranges from $27-$29.

Walking tours: Regular walking tours leave from the museum’s shop at 103 Orchard St., and like the apartment tours, should be booked ahead. Price: $27, but the food tour is $45.