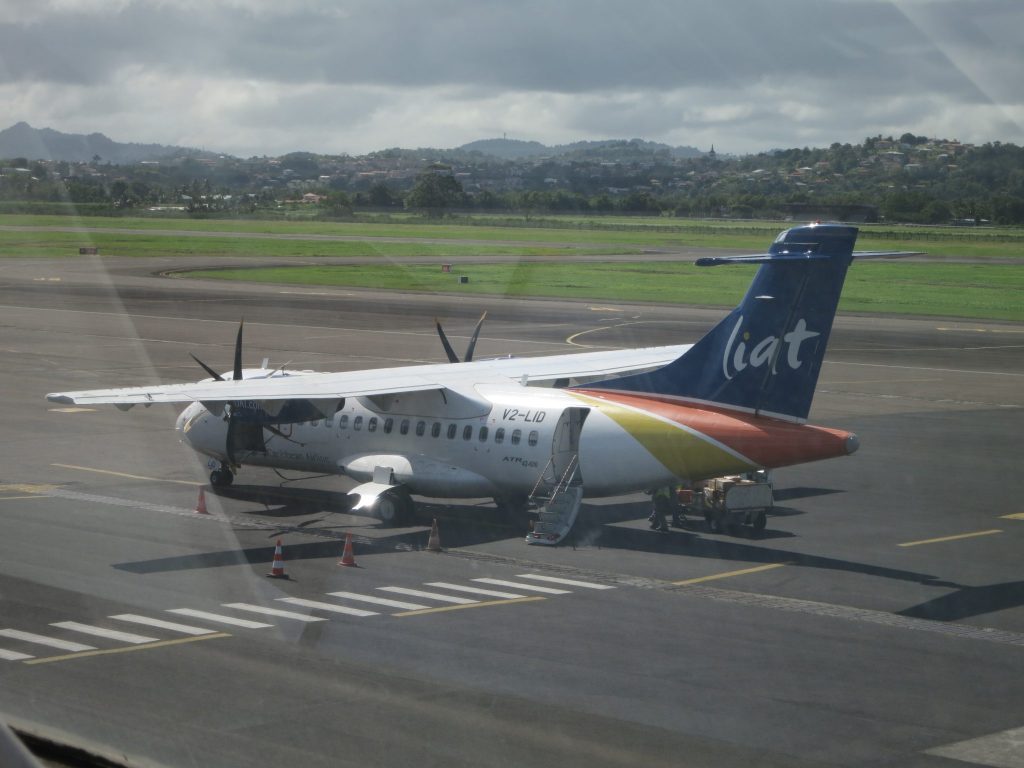 If you know me, you know that fear of flying is an ongoing issue for me. Seeing the small size and the propellers of this puddle-jumper plane pushed all my fear buttons. I couldn’t knock myself out with a sleeping pill like I often do on longer flights. I’d need to be alert enough to pick up my checked bag in Barbados to transfer to my New York flight. Instead, I took a valerian pill, meant for reducing stress, and tried to stay calm. 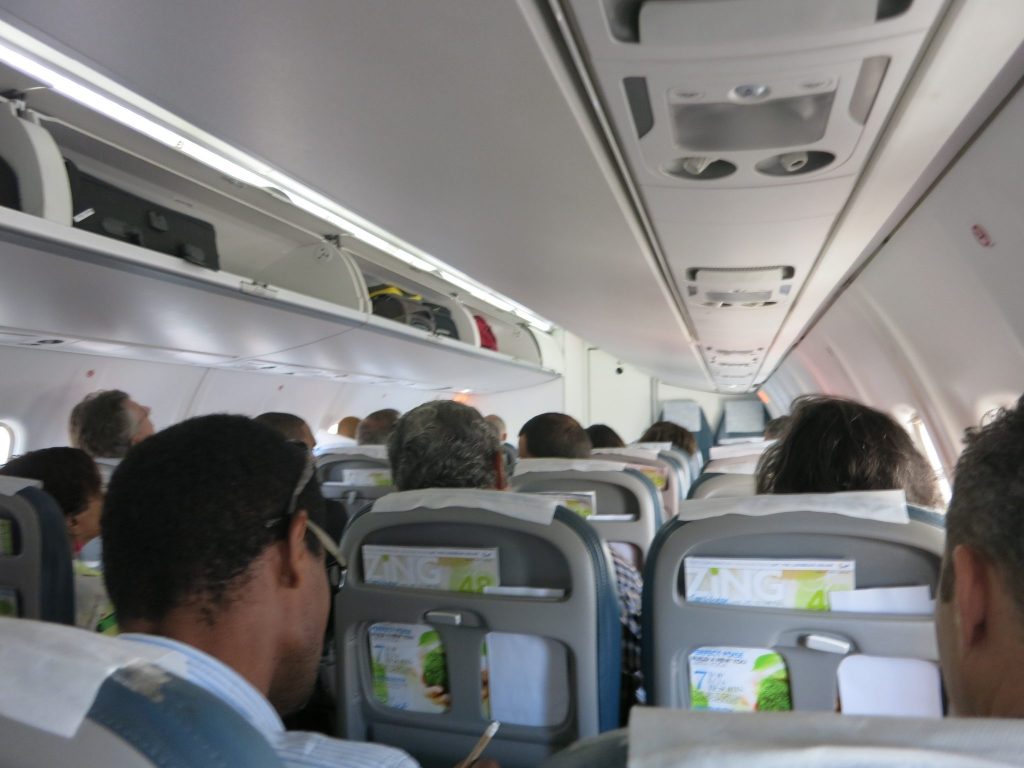 The inside was newer than I expected. I’ve been in much worse planes before!

On the first jump, I was next to the window, and a silent young Frenchman sat next to me. He wore shorts which revealed part of a tattoo of a creepy face on his knee. (Sorry, there was no way to take a photo without being noticed.) 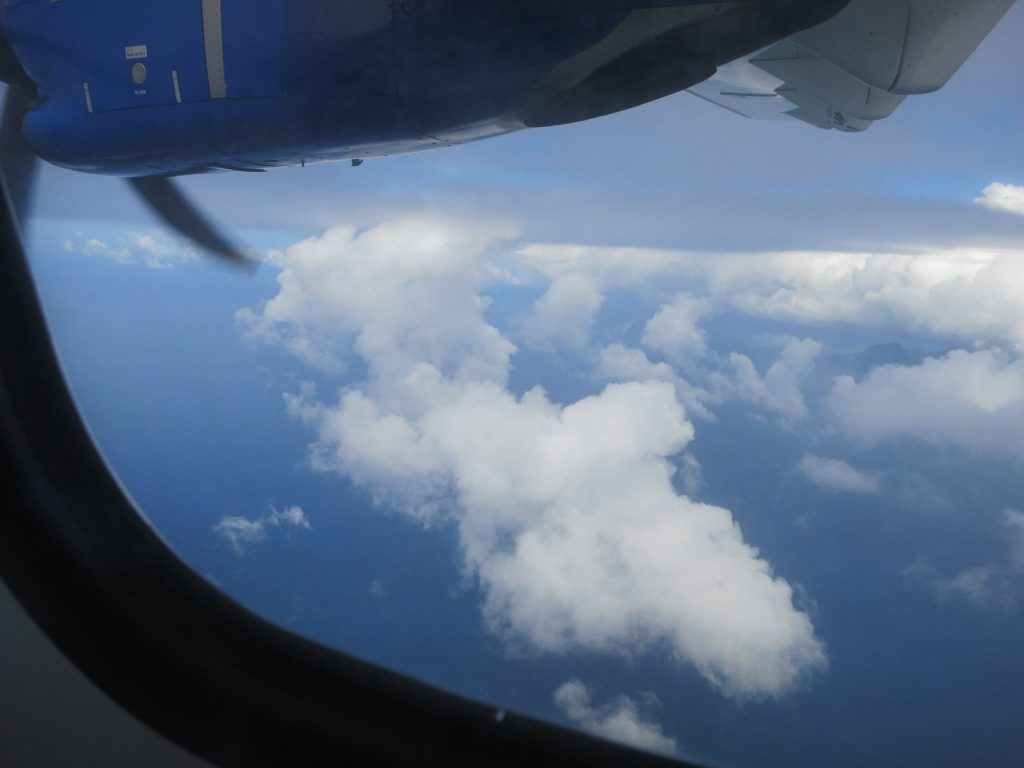 A view during the first flight.

I kept myself busy to take my mind off the fear by filming the take-off and then the landing. That helped. The flight was quick and so routine in every way that, when there was turbulence, I didn’t even get the panicky stomach I usually get. If you’d like to watch the films (they’re pretty dull and unremarkable), here they are. The first one is the take-off (about 6 minutes of the flight, until we were above the clouds).

This next film is the landing: the last two minutes of the flight.

Our stopover in St. Lucia was just long enough for some people to get off (including a couple I’d met in the departure lounge who’d spent $700 for the privilege!) and to allow others to board.

This time, an old man sat down next to me, after helping an elderly woman across the aisle to put her cane in the overhead compartment. He said “Hello” and announced that he hadn’t flown in about 15 years.

Sensing a desire to talk, I asked “Are you afraid of flying?” He nodded yes with a slightly embarrassed smile. He had laugh lines around his eyes.

We spent the next half hour—the entire duration of the flight—talking. He told me about his family (the woman across the aisle was his sister) and why he was flying after so long. I told him about my travels and my family. We discussed growing older and what’s important in life.

And he smiled a lot. His milk-chocolate-brown face was deeply lined to accommodate that smile, which revealed that a tooth was missing on the side. This, I could see, was a deeply contented man.

“I have a saying hanging in my room that I see every day,” he said, in his beautiful Caribbean accent: 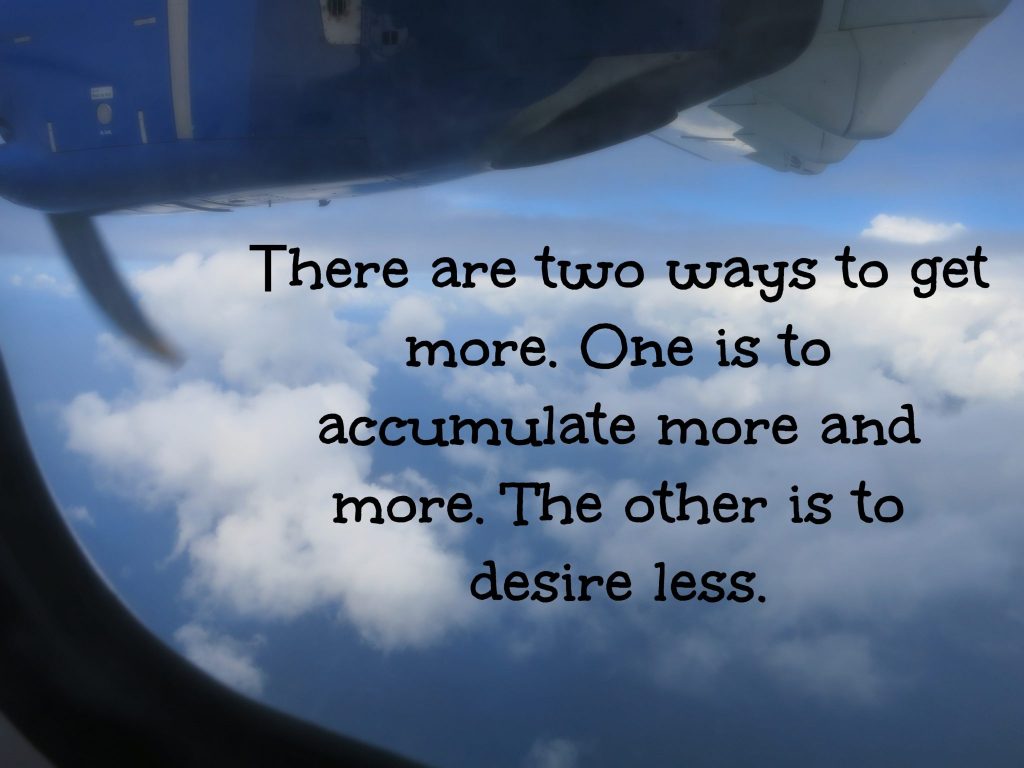 What the old man told me.

It was only a half-hour’s flight, but I was reluctant to part with this special person after such a short time. I think he felt the same, because he insisted on giving me his name and phone number, extracting a promise to visit St. Lucia. I hope I can keep that promise. His rich life experience, his love for his family, his air of contentment: all these things made me feel calm, but also made me wish the flight was longer.

I was completely fearless during this flight, and I think he was as well. What a gift! And not only that, the feeling of serenity he’d given me lasted through the whole flight from Barbados to New York, despite some rather strong turbulence.

In many ways, this stranger, this senior citizen, is who I want to become. He was bursting with love and pride in his family, both past and present. He was completely content: satisfied with his life as it is and how he lived it in the past.

Isn’t that how we’d all like to feel as we near the end of our lives?