Electric Ladyland in Amsterdam is definitely one of the weirdest museums I’ve visited yet. (Okay, the Toilet Museum in Suwon, South Korea, was pretty weird too, but this isn’t a contest. At least not yet … ) 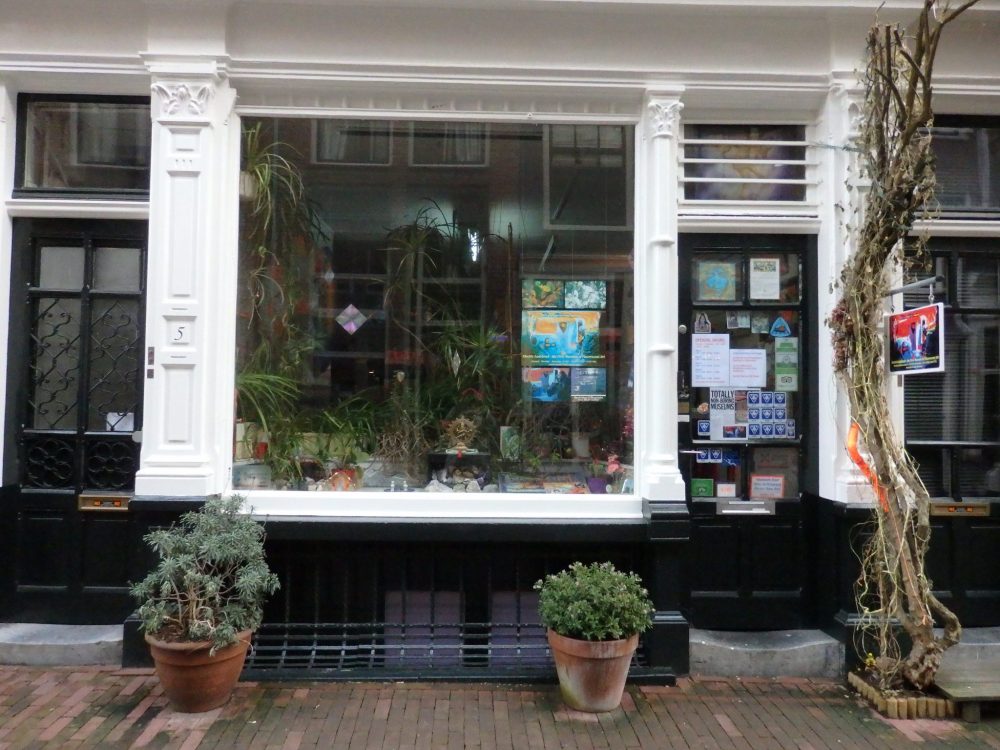 Electric Ladyland as it looks from the street.

The museum claims to be the “first museum of fluorescent art.” It certainly includes a lot of fluorescent paint. Whether much of it is actually art is another question…

The Ground Floor of Electric Ladyland

When we (my daughter, a friend and I) entered the shop, which overflowed with “art”, I felt a bit overwhelmed. Paintings covered the wall, but were also leaning in stacks of all shapes and sizes. I put the word “art” in quotation marks because much of it looked simple and amateurish. The fact that it was painted with fluorescent colors didn’t help. The word “cacophony” comes to mind, but it was a cacophony of colors rather than sounds.

Puzzlingly, various random objects were also on display which, presumably, have something to do with fluorescence. The clutter allowed only a very narrow space for us to enter the shop. 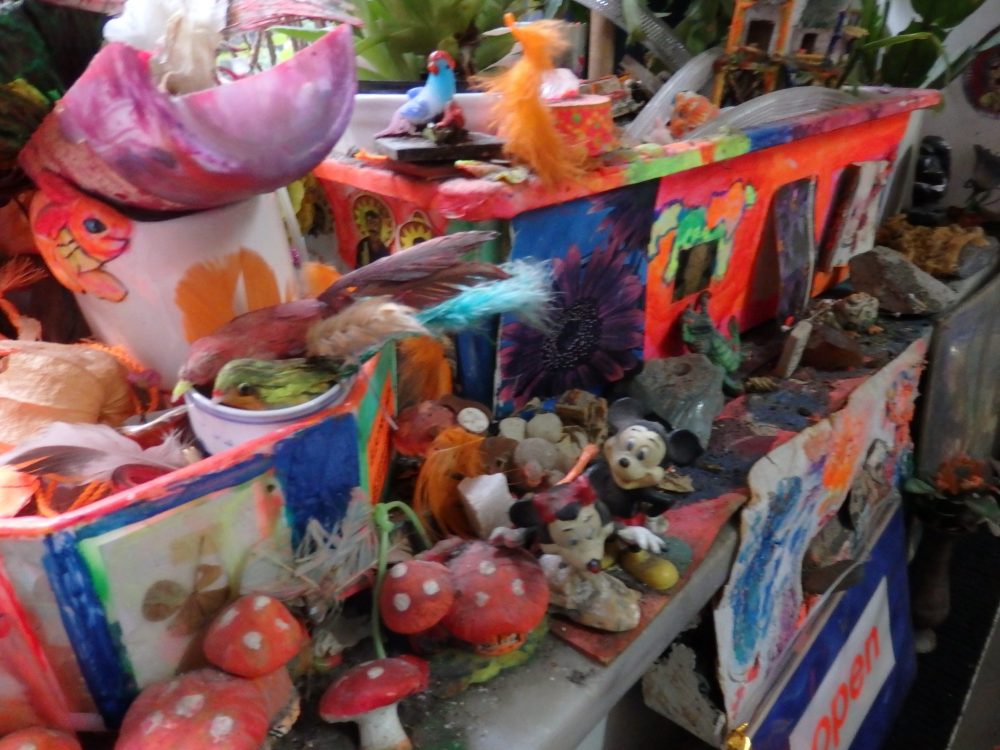 the clutter just inside the door of Electric Ladyland. Are these objects for sale? Or just for decoration? It must be a fire hazard!

Inside, we met Michèle Delage, who explained that before entering the museum itself, which was downstairs in the basement, we’d have to pay admission and take off our coats and shoes. We were also expected to place a pair of socks or booties over our own.

None of these requirements would normally be a problem, but in such a small space it was hard to maneuver and at the same time avoid bumping into some random object or person. It got even worse when a group of people emerged from the basement and tried to put on coats and shoes at the same time that we were removing ours.

Finally coatless and shoeless, we descended the basement stairs to experience Nick Padalino’s “Flourescent ‘Participatory’ Environment.” One end of the space – quite a small basement occupying the same footprint as the shop upstairs, I think – bulged from floor to low ceiling with strange shapes. It seemed to be intended to resemble a cave, and the reason we wore socks was that all of it, including the ceiling and floor, screamed in a range of loud fluorescent colors. We wouldn’t want to scrape any of that glare off by mistake, would we?

The participatory part was that we could walk into the space. We could peer into small “caves” within the “environment” and push buttons to turn on various lights. 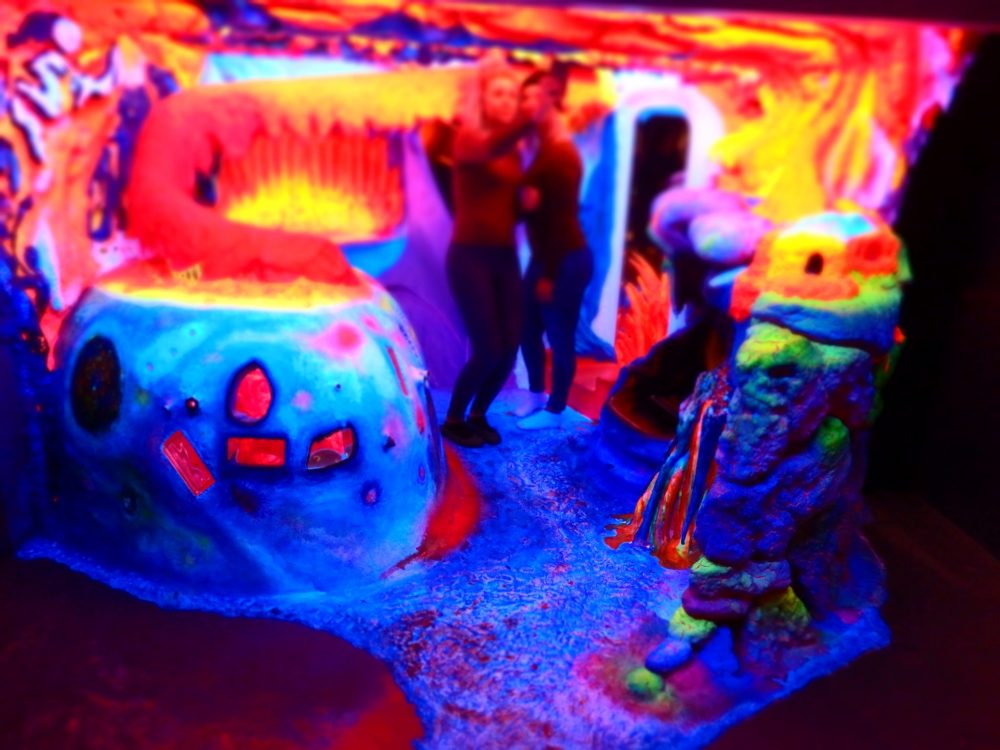 To give you an idea of the size of the museum, the photo above, with the two young women, covers about half the floor space.

Visiting the Electric Ladyland website later on, I learned that each small part of this very small installation expresses something that Padalino has seen or experienced. For example, the explanation for the “Plains of Heaven” segment, according to the website, is: “The luminous energy of the Heavens above the pure plains of clouds manifests itself in the flowing waters of the Ganga and evolves onto land.”

Well, that clears that up.

To me, the “environment” seemed like something from a bad drug trip. And it made me wonder about what happens inside Padalino’s head. 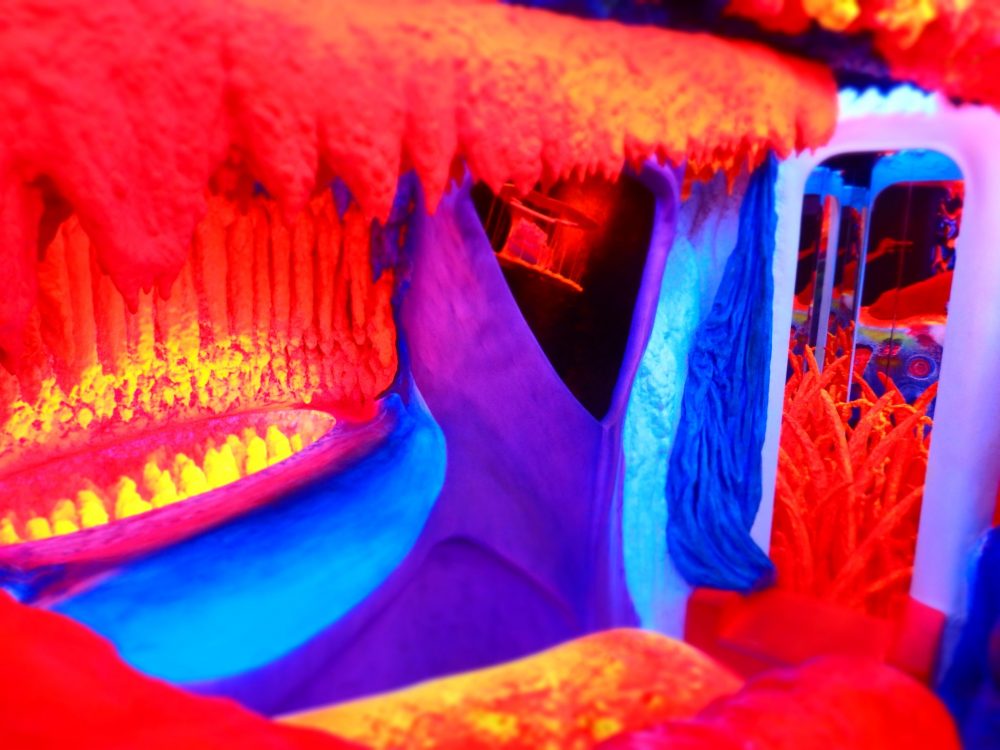 Another angle on the “environment” at Electric Ladyland. It’s the same space the girls in the other picture were standing in.

A “Tour” of Electric Ladyland

As we explored the “environment,” Padalino played tour guide, explaining everything – and I mean everything – about fluorescence.

He explained the science, the difference between natural and manufactured fluorescent colors, the “art” hanging behind a display counter: more than I really needed to know, to be honest. 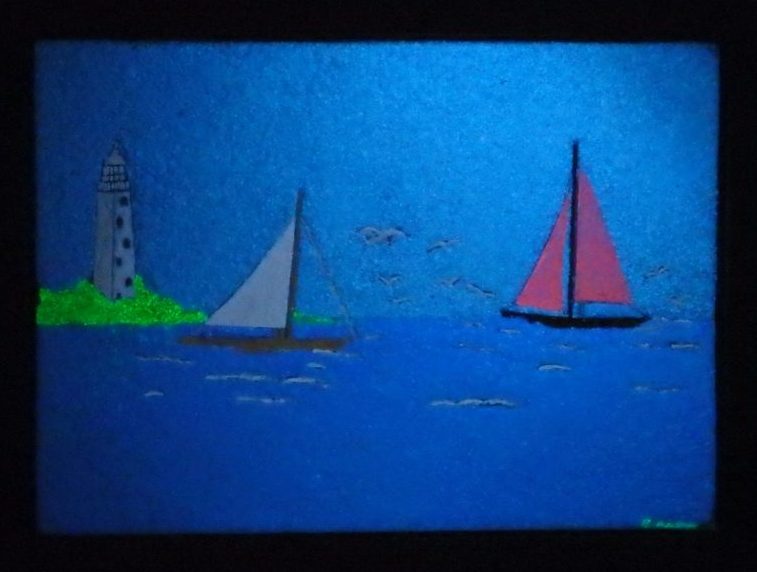 This artwork was made from ground-up naturally-fluorescent rocks.

He talked non-stop, often repeating himself. Turning off the lights on the other end of the basement, he waved black lights and lights of other wavelengths over a range of objects in cases: rocks, for example, that looked like simple grey rocks, glowed in a range of colors under the lights. The various wavelengths revealed patterns on money, ID cards and passports that we would not otherwise have seen. 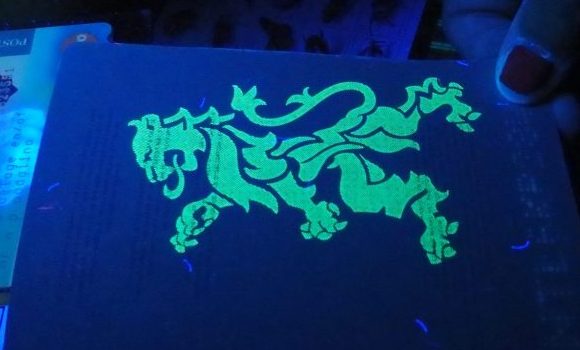 You can barely see the watermark on the pages of a Dutch passport under normal light, but the black light revealed this lion.

In between the facts and figures, he mentioned trips to India and New Jersey (apparently a leading source of naturally fluorescent rocks). He revealed that Delage upstairs is his partner. They both washed up in Amsterdam (Delage is French; he is American) sometime in the 1970s and never left. Padalino’s obsession with fluorescence led them to set up this “museum” in 1999.

While it was interesting at times, it was a bit of an assault on the senses. His non-stop spiel – with a New Jersey accent, which felt pleasantly familiar to me at first – tired me. We spent too long “exploring” the environment, when five or ten minutes would have been enough. I wanted to leave well before the half-hour “tour” was over. Given that the “museum” is just one room the size of a postage stamp, it seemed a bit much to call this a “tour,” but just heading for the stairs while he was still talking would have been rude.

It occurred to me that Electric Ladyland is, essentially, Padalino’s “man-cave,” except he allows visitors. 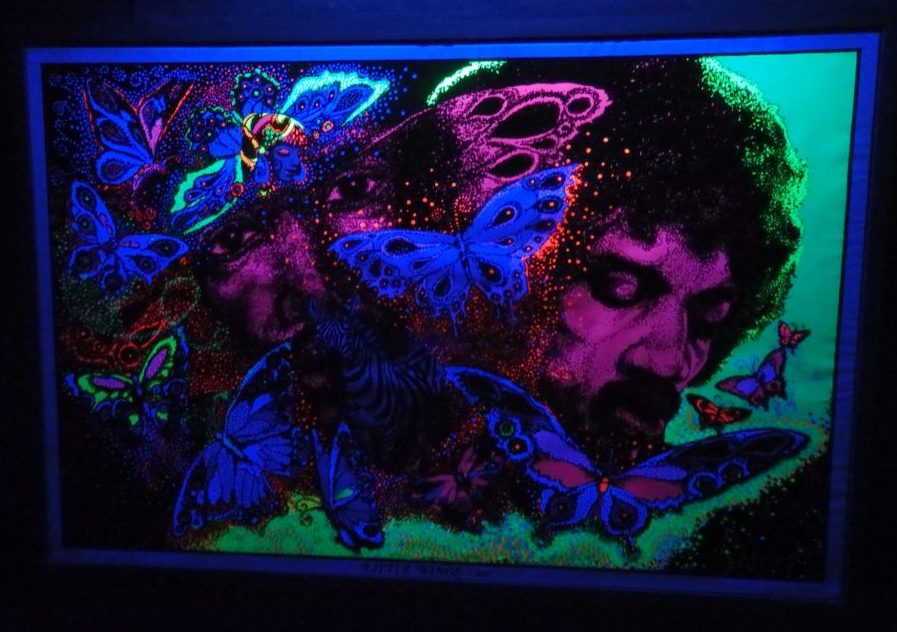 Is this black light poster a flash from your past?

Should you visit Electric Ladyland?

If you feel nostalgic for a psychedelic youth when black light posters were the ultimate cool, this is definitely the place for you. Or I suppose if you’re into geology and would like to see his collection of naturally-fluorescent rocks.

Otherwise? Not so much.

This post is one of a series on small museums in Amsterdam.