Those of us who are not religious often see the Bible as nothing more than a collection of myths. Yet archeologists have confirmed many elements of Bible stories. Visiting the City of David reintroduced me to the overwhelmingly long history of Jerusalem. There’s something awe-inspiring about its sheer length, covering thousands of years of human history.

While every tourist in Jerusalem explores the Old City with its holy sites, central to three religions, many overlook the City of David National Park, just outside the city walls. This site, older than the more well-known city above, sits on a spur of land below the Old City.

Visiting the City of David

This is the place where the original King David, of Bible fame (about 1010–970 BCE), established the capital city of Judea, or possibly of a united Israel and Judea, though archeologists dispute the facts. There was certainly already a town on this spot, many centuries old. Today, a national park endeavors to make that ancient city visible in the remains of what was likely David’s palace and other buildings. It’s only a partial excavation, since the modern city has grown over the centuries on top of older structures.

A viewpoint, not far from the entrance to the park, made clear to me why the original city of Jerusalem grew in this location. The deep valleys that surrounded the site on three sides formed, in effect, a natural moat. Above the city, on what is now called the Old City, the First Temple was built by King Solomon not long after David’s reign. (The ancient retaining wall of the First and, later, Second Temples is now known as the Western Wall, a holy site for Jews.) 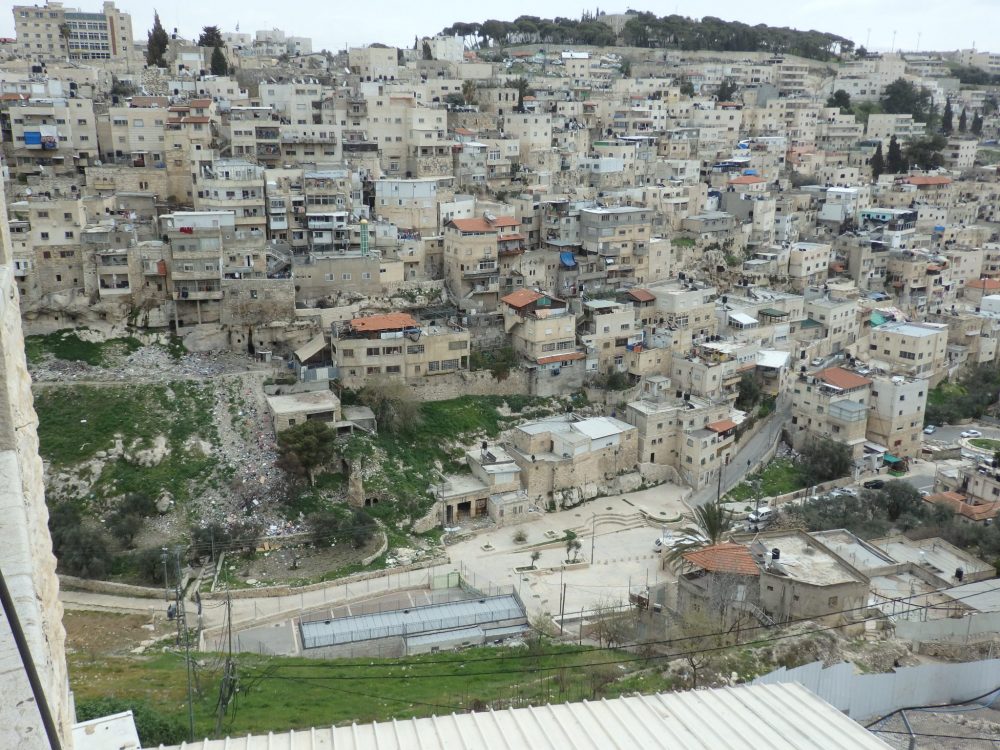 In this view from the viewpoint in the City of David, you can see the valley far below and the buildings of an Arab neighborhood across the way.

Below the viewpoint, a short bridge led me, with two other bloggers and our guide, over what remains of the palace’s foundations: the “Large Stone Structure.” Whether it actually is King David’s palace is still unproven, but in any case it dates to the same period, the 10th century BCE.

Our guide, Matityahu Glassman, provided to us by City of David, was extremely knowledgeable about the history and archeology of the City of David. He was able to point out, in this limited view of the ruins, some of the evidence that this was indeed a palace, and likely King David’s palace.

Visiting the City of David: Talking about water

Much of the tour ended up being about water, rather than buildings. The water supply for the town was the Gihon spring, down in a valley below the city. The fortifications around the city extended downhill to the spring.

Nearby, in around the 18th century BCE (3800 years ago!) the Canaanite inhabitants of the city carved a pool out of the bedrock, and carved a channel for the spring water to reach the pool. Adding fortifications around the pool ensured the city’s water supply, even in times of war or siege.

Our tour led through the ancient route used by citizens to access that pool to draw water. Now covered, this route between the walls would once have been open to the sky.

Visiting the City of David: The Siloam tunnel

The highlight of the tour, though, was the later Siloam tunnel, dating from King Hezekiah’s reign about 2700 years ago and mentioned in 2 Kings 20:20:

As for the other events of Hezekiah’s reign, all his achievements and how he made the pool and the tunnel by which he brought water into the city, are they not written in the book of the annals of the kings of Judah?

When Hezekiah saw that Sennacherib [king of Assyria from 705 BCE to 681 BCE] had come and that he intended to wage war against Jerusalem, he consulted with his officials and military staff about blocking off the water from the springs outside the city, and they helped him. They gathered a large group of people who blocked all the springs and the stream that flowed through the land. “Why should the kings of Assyria come and find plenty of water?” they said.

So Hezekiah ordered the tunnel to be built so that the city could withstand a siege by the Assyrians. Passing under the city and directing water from the Gihon spring to the Siloam pool, the resulting tunnel, 533 meters long, was carved with axes through the bedrock. Still channeling water today, it is open for visitors to walk through.

Visiting the City of David, wading in the dark

I had not come prepared. I didn’t have water shoes, or quick-drying pants or shorts or a bathing suit. But, never mind. I decided to go for it anyway. Removing my shoes, I tied their laces together and slung them over a shoulder. I stuffed my socks into my handbag, which I placed in front rather than on my back as usual. Rolling up my jeans as far as I could, I was as ready as I could be.

In front of me walked another blogger, followed by Matityahu, the tour guide. Behind me was one more blogger. Since Matityahu and the woman behind me were using their phones as flashlights, I decided I didn’t need to. I could see enough by theirs. 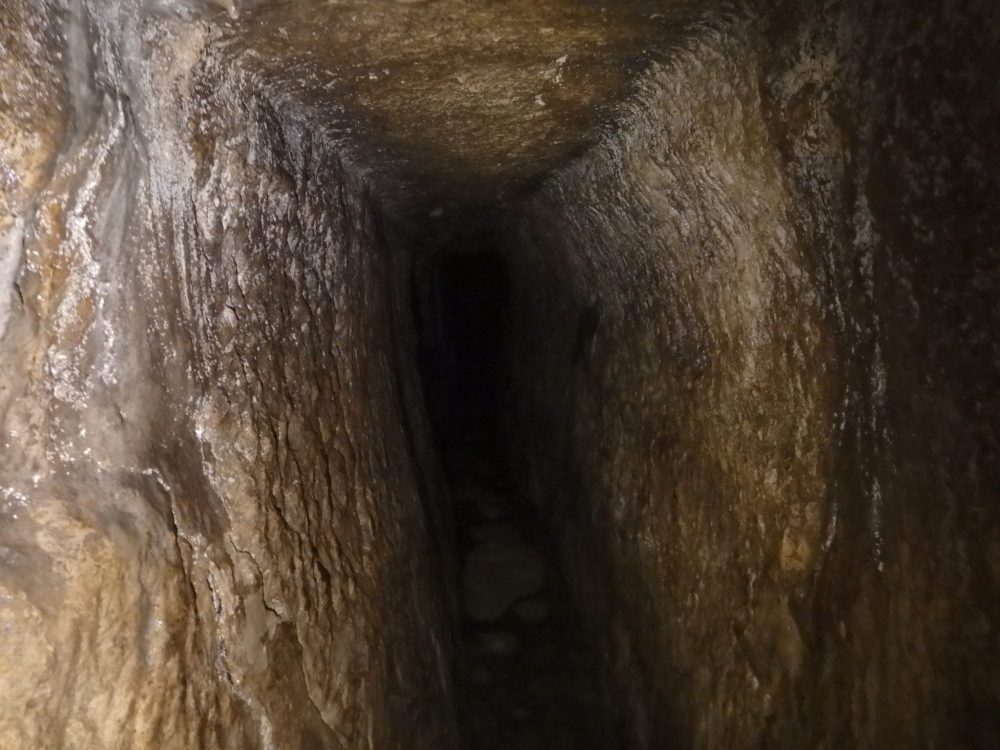 This is the best picture I managed to get inside the tunnel.

Within a few steps of starting out – the water felt cold but not numbing, and the bottom of the tunnel stayed relatively even – I was soaked to my thighs. Soon the water became less deep – to mid-shin – and stayed that way for most of the rest of the walk.

This is not a walk for claustrophobics. So narrow that at times I had to turn a bit sideways, I moved awkwardly. My shoes banged against the walls. I held my hands out on both sides, feeling the walls in the dark. While the floor of the tunnel felt relatively smooth, parts had concrete patches, a slightly rough surface, hurting the soles of my feet. To make matters worse, at times the roof was so low I had to bend over as well.

Nevertheless, we had fun, making jokes about snakes in the water and monsters coming out of the darkness behind us.

At the same time, I marveled at the age of the rock forming the tunnel. Or, rather, not the rock itself, but the axe marks still visible after centuries. The amount of work it must have taken to hack a 533-meter-long tunnel through solid rock is mind-boggling. And the fact that the tunnel is still doing its job 2700 years later is amazing.

Eventually we emerged, with sodden pants and sore feet, into the light again at Siloam pool. The inhabitants, even during a siege, would have been able to draw water here or at the Gihon spring itself. 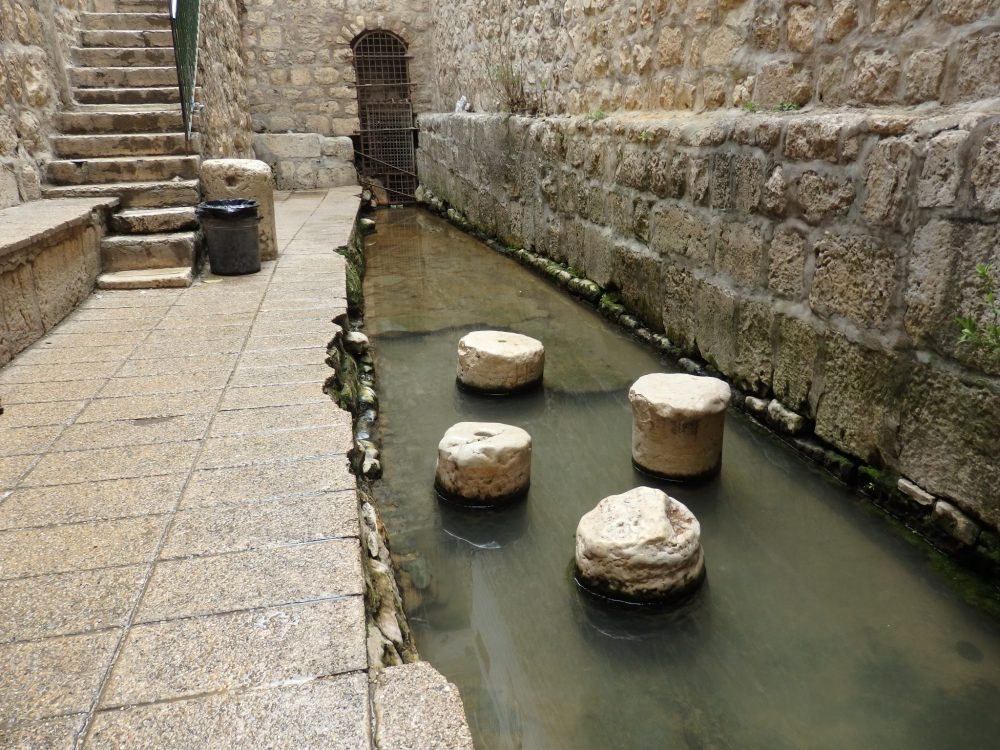 the end of the Siloam tunnel. We went up the stairs and then down again to reach the Siloam pool itself.

I should add, however, that there is a dry tunnel option as well. The guide let us choose, and I’m glad we took the wet option.

Is visiting the City of David worth it?

At 45 shekels (about 11 euros) for a guided tour, the City of David National Park is certainly worth visiting to get an idea of the complicated and long history of Jerusalem. The entry fee includes a 15-minute film summarizing the history. (I missed it because I was late for the tour.) The tour guide is key to the experience: ours was able to help us “see” what once stood on this site. He effectively used quotes directly from a well-worn Bible to show the links between well-known stories and archeological fact.

Disclosure: I received admission to the City of David National Park for free. Nevertheless, all opinions are my own.