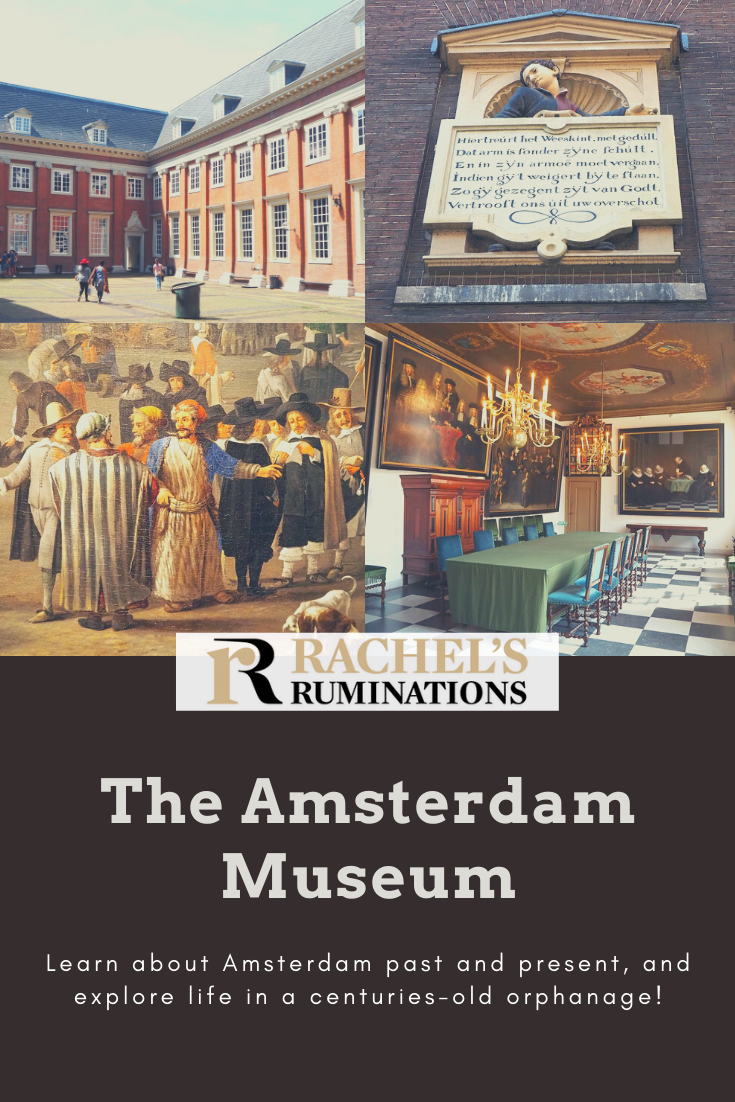 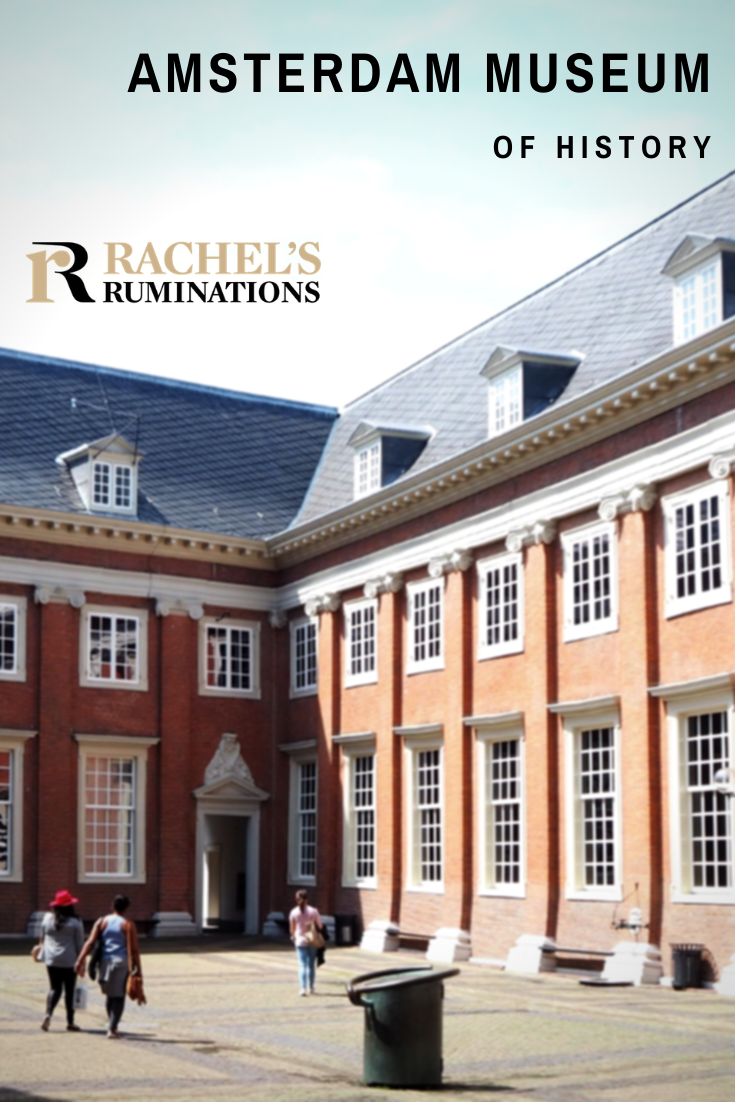 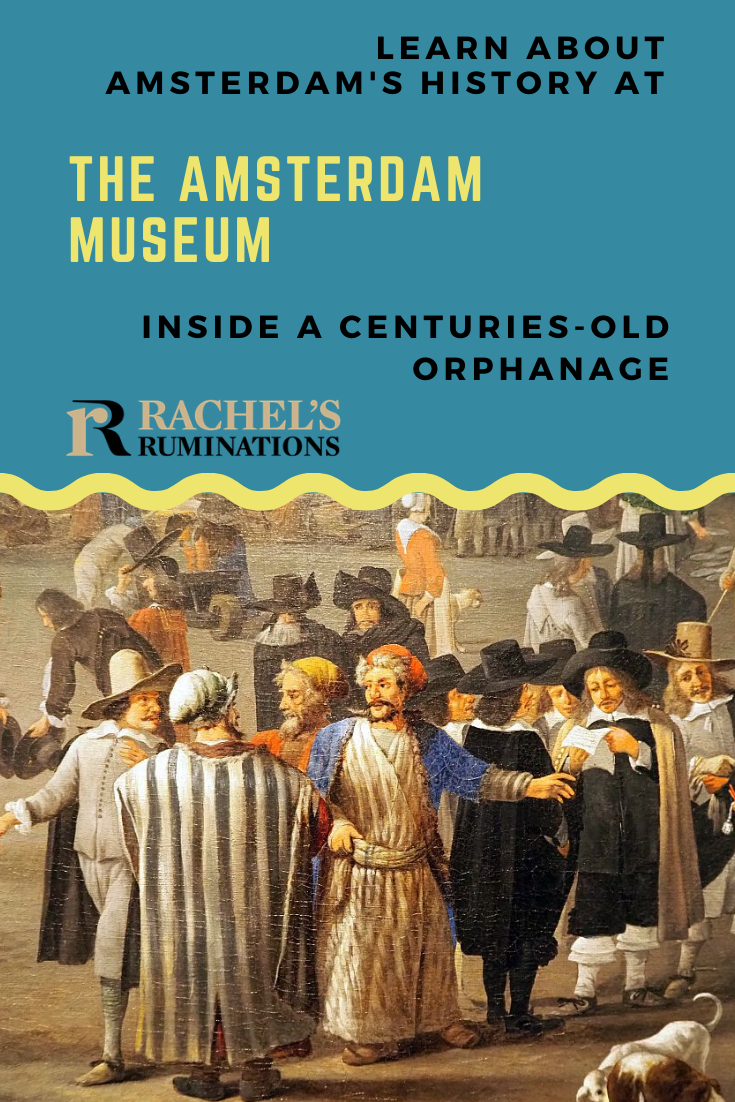 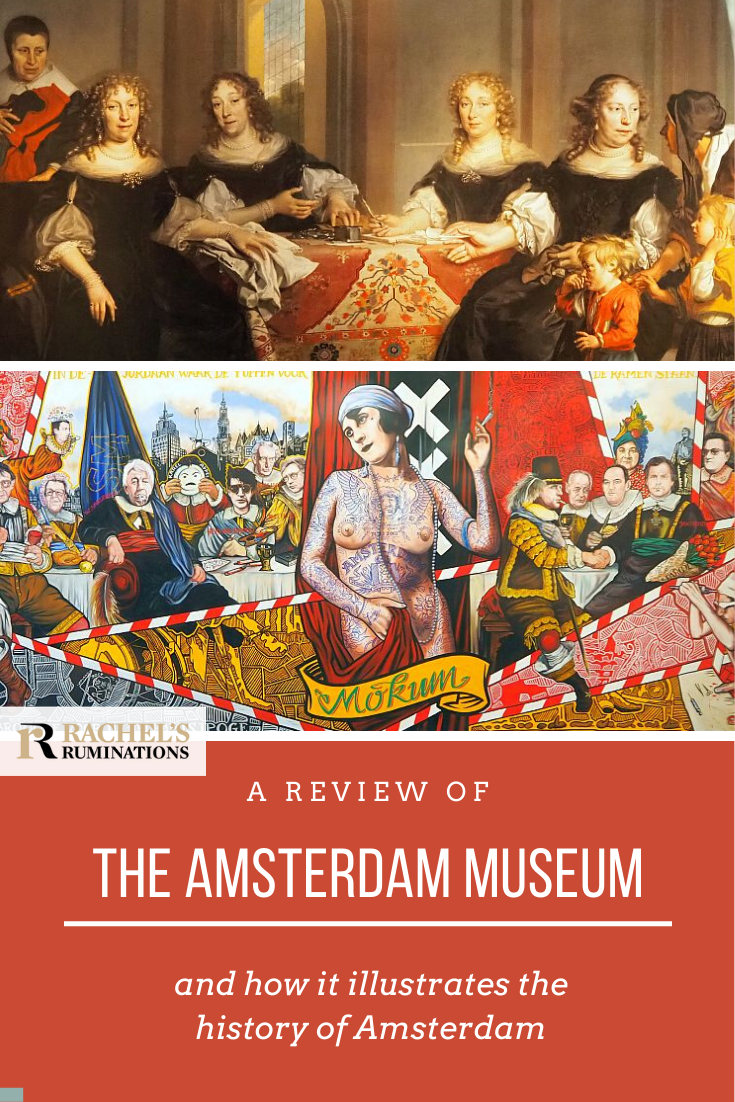 I visited the Amsterdam Historical Museum (more properly just called the Amsterdam Museum) as an afterthought. It was on my list: one of the many small museums in Amsterdam that I like to visit and write about.

That day, though, I wanted to see Below the Surface, an archeological exhibit in Rokin metro station. But that didn’t take me long and, noticing signs in the metro station to the Amsterdam Museum, that’s where I went.

The Amsterdam Historical Museum, of course, focuses on the city of Amsterdam. Using a series of interactive exhibits inside a Golden Age-era building, it takes visitors through the history of the city, addressing the different ways in which it has been viewed and redefined along the way.

The Amsterdam Museum is housed in what used to be the Civic Orphanage, founded in 1578. Before that, the building was a convent, but once the Reformation hit Amsterdam, the city government confiscated the building from the nuns who lived there.

The children, in that period often orphans because of the plague or other infectious diseases, received schooling and training at the Civic Orphanage. The boys learned trades and the girls learned homemaking skills. The orphanage had a good reputation: a high-status project, it stayed in operation until 1960.

The traces of the orphanage are visible in various ways today. For one thing, the boys’ lockers, where they stored the tools they used in their vocational apprenticeships, open out onto the inner courtyard of the building. Today they shelter an exhibit about the orphanage, and visitors can peer into each one to learn about aspects of the children’s lives: their routine, what they were taught, how they got there, what they wore, and so on.

The idea was to bring these poor orphans up in a Christian environment so that they would become good workers as adults. Placing the orphanage in such a central location was intentional: to make sure the people of Amsterdam saw them and how neat and obedient they were, so that the city’s prominent citizens would donate to support the orphanage.

The Regentenkamer (the Regents’ room) was where the governors of the orphanage met: six men, prominent citizens doing charity work for the poor. Four female regents met separately from the men. Regents commissioned paintings of themselves, emphasizing their status as leaders in charity. This painting, for example, from elsewhere in the building, is The Governesses of the Civic Orphanage, by Adriaen Backer, and dates from 1683.

An exhibit for children called “The Little Orphanage” gives a more hands-on look at life in the orphanage in the 17th century. Kids visit rooms of the orphanage including the refectory (where the orphans ate), a dormitory, and so on.

Through a wristband they receive at the entrance, children can activate “speaking objects” along the way, which tell the story of an orphan named Jurriaan. In these rooms the children are allowed to touch things, and that includes activities like crawling through a tunnel, lying on a bed, dressing in an orphan’s uniform, and so on.

If you are planning a visit to the Netherlands, you might also enjoy these articles:

A permanent exhibition of the Amsterdam Historical Museum, “Amsterdam DNA,” covers the larger history of the whole city. I found some of the detail most interesting, some of which I’m including in this article as “little-known facts.”

The diagrams showing the city in comparison to sea level emphasize the importance of water management. Other diagrams show the piles that the 17th century buildings in Amsterdam’s center still rest on: the sheer number is truly impressive, especially when you realize that all those piles came to Amsterdam from other parts of the world, particularly America.

Little-known fact: The palace on the Dam, built in 1665, rests on 13,659 wooden piles! #amsterdammuseum Click To Tweet

The displays cover Amsterdam’s importance as a major world port and all of the major turning points in Amsterdam history including the impact of the Dutch East India Company on Amsterdam’s growth, the effects of the Reformation on city life, the city’s importance in Europe and as a colonial power, and so on. It does not shy away from the dark side of what is still called the “Golden Age.”

Little-known fact: Sailors who enlisted to work for the Dutch East India Company had to serve for a minimum of 5 years. #amsterdammuseum Click To Tweet

I was touched by the simplicity and effectiveness of a wall in the World War II section. I didn’t see what the pattern on it meant until I moved closer and saw that each of the little dots was a human figure: men, women and children. The wall shows all 60,000 Jews from Amsterdam who died in the Holocaust.

Providing a proud note, later in the chronology, a small display marks the first day of same-sex marriages in the Netherlands in 2001.

Little-known fact: The Netherlands was the first country in the world to legalize same-sex marriage. #marriageequality #amsterdammuseum Click To Tweet

A window reveals a painting called Amsterdam Civic Guard Portrait, from 2001, mounted high in the central hallway of the museum, a clear reference to Rembrandt’s Nightwatch.

It portrays a grouping of “free spirits of Amsterdam”: well-known businessmen, artists, politicians, protesters, writers, sportsmen, musicians. The figure in the center, “Mokum,” represents Amsterdam in all its grittiness, complete with a joint in her hand and a tattoo of Rembrandt on her breast.

World – City is the other permanent exhibit of the Amsterdam Historical Museum, and it follows on very logically from the Amsterdam DNA exhibit. It focuses on the city’s place in the world: its relationship to other parts of the world, but also its inhabitants themselves, a very diverse population, both today and in the past.

The museum seems to emphasize the different ways that Amsterdam has redefined itself over the centuries; I found its look at more recent shifts quite interesting. How did a wealthy city, built, both figuratively and literally, on the profits of the slave trade and colonialism, transition over the centuries to the still-unattained ideal of tolerance that it cherishes today?

This presentation does not hesitate to confront Amsterdam’s colonial past and its present-day remnants. It has six sections: “From settlement to world city,” “Seeking happiness,” “I Amsterdam,” “Perpetrator or victim,” Religion and tolerance,” and “World – City revisited.”

A section on some of 20th century protest movements would be particularly interesting, I think, to foreigners visiting Amsterdam. It illustrates the kinds of domestic political controversies, mostly unknown to visiting tourists, that arguably led to the city’s current attitude of pragmatic tolerance.

Price: Adults: €15 ($17), but it’s free for children up to and including 17 years old. Buy your tickets ahead by clicking here. Entrance to the museum includes an audio guide, which you can activate at marked points throughout the exhibition.

You can see the building and the courtyards for free, as well as the orphanage lockers, which open onto a courtyard used by the museum café.