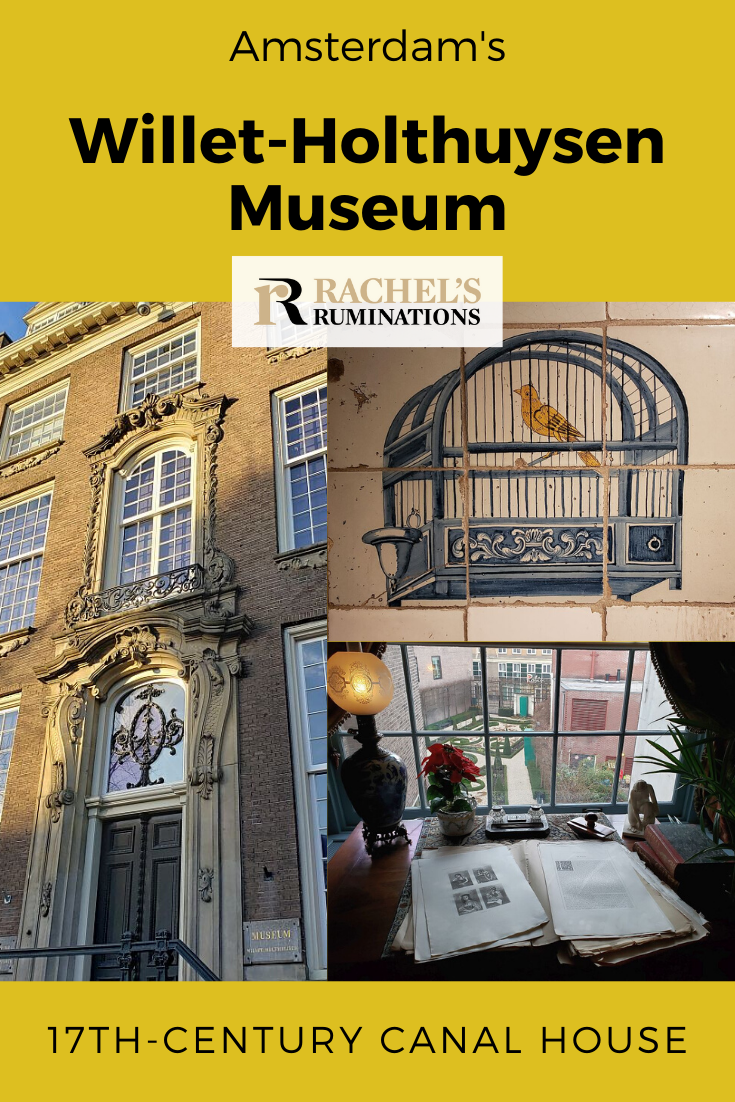 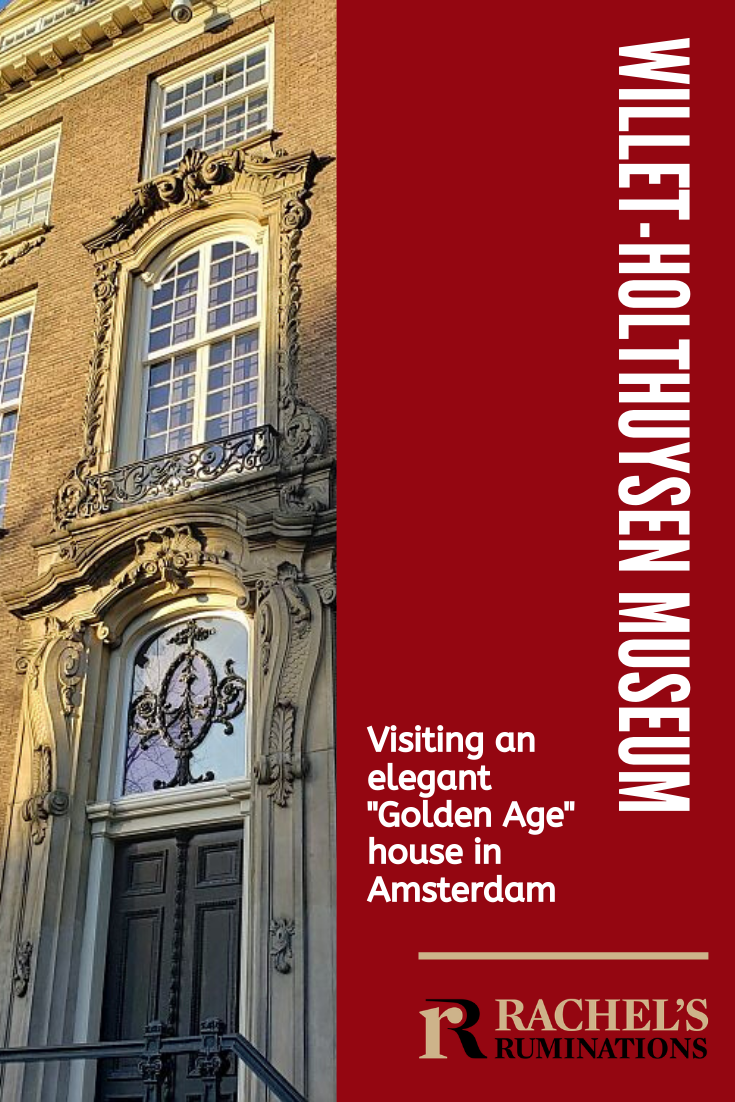 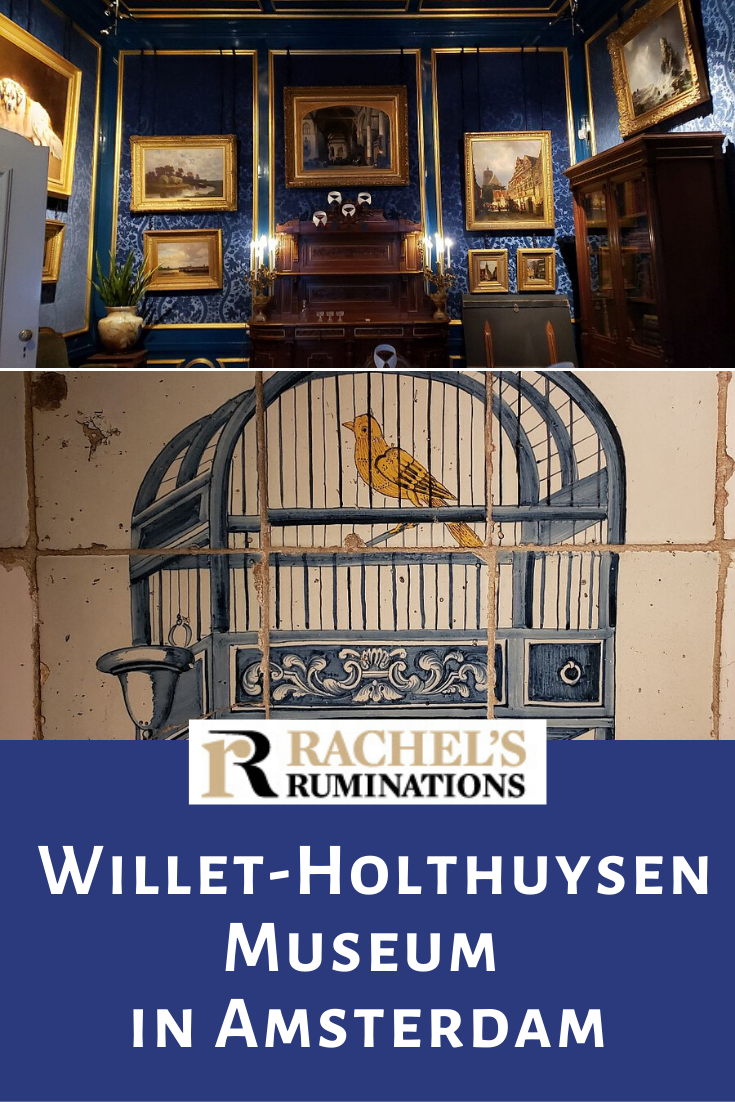 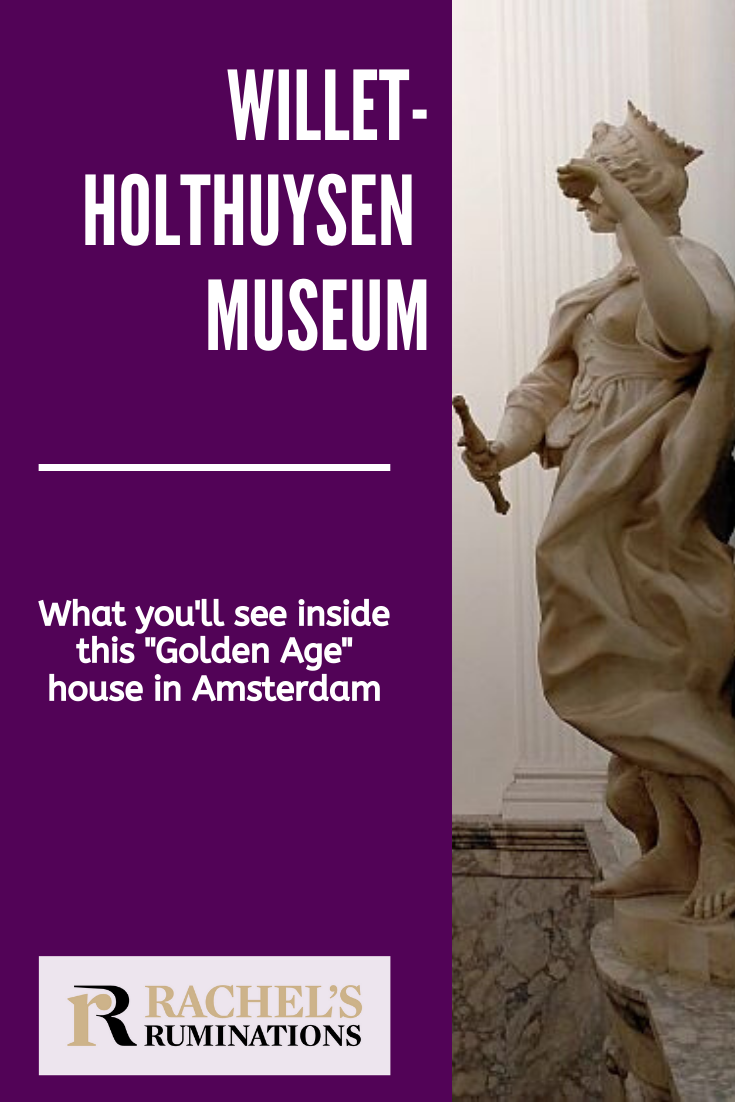 Many tourists visiting Amsterdam come to see the beautiful buildings in the old center. The UNESCO site – officially called “the Seventeenth-Century Canal Ring Area of Amsterdam inside the Singelgracht” – is lined with elegant “Golden Age” houses. It’s very picturesque and very Instagrammable. You can see a few of them on the inside: one of those houses is the Willet-Holthuysen Museum.

Disclosure: This article contains affiliate links. If you click on one and make a purchase, I will receive a small commission.

A “Golden Age” house in Amsterdam

The Willet-Holthuysen Museum’s building dates to 1687, the late end of the “Golden Age,” when the mayor of Amsterdam, Jacob Hop, lived there. I don’t know if he owned it at the time or the city bought it for the mayor’s residence. I suspect the latter because other mayors lived there after him.

Either way, it was an enormously valuable piece of real estate, with its double-width frontage.  Houses were taxed according to width in the 17th century, so building a wide house was a clear sign of wealth.

I put the name “Golden Age” in quotation marks above because the term is falling out of use. The Golden Age was a period of enormous growth and prosperity in Amsterdam: when those canal rings were built and expanded. Yet the “golden” part of it was only for the wealthy merchants. They made their money from shipping and trading in goods from overseas: slaves, for example, and sugar grown on plantations worked by enslaved people.

Not really so golden when you look at it that way.

Some museums – I know of the Amsterdam Museum and the Maritime Museum – have decided to stop using the term. The problem is that a good replacement name isn’t easy to find, other than the rather nondescript “17th century.” Hence my reluctant continued use of “Golden Age.” Maybe “the Age of Exploitation” would be more appropriate?

History of the Willet-Holthuysen house

The house passed through many owners over the centuries until Abraham Willet and his wife, Lousa Holthuysen, bought it in 1861. Louisa Holthuysen died a widow in 1895, leaving the house to the city so that it could become a museum.

Like the Van Loon House, another Golden Age house in Amsterdam that you can visit – click the link for my review – the Willet-Holthuysen Museum offers a glimpse of life in the 18th and 19th century.

Apparently the visitors of the time – the turn of the 20th century –  were only interested in the grandest rooms on the bel-etage, above the ground floor, so much of the upstairs was emptied and not maintained. Now under the ownership of the Rijksmuseum, the house has been refurnished and brought back to its late 19th century look.

A tour of the Willet-Holthuysen Museum

Admission to the museum includes an audio tour, which is worth taking for the background information. It’s the kind that you trigger by pointing it at a sign, and you can push additional buttons for more detail. This allows you to view the rooms in whatever order you please. Posted signs offer more information on particular items on display, many placed here from the Rijksmuseum’s collections.

Entering on the ground floor, now mostly used for museum business, you can go straight down the hall after buying your ticket to see a short film about the house’s history and to visit the reconstructed kitchen. All of these “below stairs” rooms would have once been work spaces in the Golden Age.

The bel-etage, or rather the floor right above the kitchen level, was meant to impress, and it does. People of the 19th century who could afford to live in a Golden Age house in Amsterdam did not cut corners!

The beautiful ballroom upstairs on the bel-etage sets the tone, with its elegant chandelier and wallpaper in Louis XVI style. Apparently, the money that Willet spent decorating it would be, in today’s money, the equivalent of half a million euros.

Most of the rest of the bel-etage continues this effect: the gentlemen’s parlor, the ladies’ salon, and the dining room.

I especially like the dining room: the table is richly set, yet you can imagine a rather intimate small gathering there.

My other favorite room is the koepelkamer (conservatory), a small, eight-sided room on the back of the house with enormously tall windows looking out on the garden. It’s light and bright and would be a pleasant place for a cup of tea.

If you’re planning a visit to Amsterdam, make sure to check out my whole series on small Amsterdam museums.

Upstairs in the Willet-Holthuysen Museum

Upstairs, the bedroom and study are just as grand. Yet, at the same time, it seems like it must have been comfortable as well, when the Willet-Holthuysens weren’t entertaining.

The small, octagonal, collector’s room is an interesting one: Willet used it to show his smaller art objects to friends. (Can you imagine having a separate room just for showing people your valuables?) It’s very different from the rest of the house: in a Renaissance style, with dark furniture, dark red cloth wallpaper, and painted glass windows.

Also check out the over-the-top statues in the stairwell upstairs. The stairwell, by the way, was pretty much the only thing that the Willet-Holthuysens didn’t change when they moved in, so it dates to an earlier conversion in the mid-18th century.

You get a good view of the garden from the study upstairs. It’s extremely formal, redesigned to a French classical style popular in the 17th century. The whole thing is a reconstruction, since the original would have been smaller to accommodate a stable and coach house.

A few additional rooms house an exhibit of various Willet-Holthuysen-related items: ornate furniture and ceramics as well as art pieces, some of which are by Golden Age masters and some of which are the family’s amateur works.

Servants at the Willet-Holthuysen residence

Of course, any elegant Golden Age house in Amsterdam would have amounted to nothing without the servant classes, and the Willet-Holthuysen Museum does give a bit of information about their work. We saw the kitchen, which, reconstructed and quite homey-looking, probably disguises how much work it would have been to keep the family and all their visitors fed, clothed and clean. The occasional bird images on the mostly-plain tiling are particularly charming.

In a sort of in-between floor between the bel-etage and the bedroom floor upstairs, we found the provisiekamer: the pantry. The china that wasn’t used every day, the silverware and other valuables would be locked up in this room, safe from theft. I imagine the servants spent a lot of time there polishing the silver.

Unfortunately, the servants’ quarters further upstairs are not open to the public. I would have liked more insight into their lives.

Book your hotel in Amsterdam here.

Should you visit the Willet-Holthuysen Museum?

Would I recommend this museum? Yes, but I wouldn’t recommend going to both this one and the Van Loon House unless you’re a particular fan of Golden Age houses in Amsterdam. I would certainly, if you want to learn more about the growth of Amsterdam in the Golden Age, combine it with the Grachtenhuis museum (a.k.a. Canal House Museum), which specifically focuses on how the city grew and how the houses were built and used. The Amsterdam Historical Museum would also combine well with this.

Book your ticket to the Willet-Holthuysen Museum ahead of time, including a one-hour tour, by clicking here.