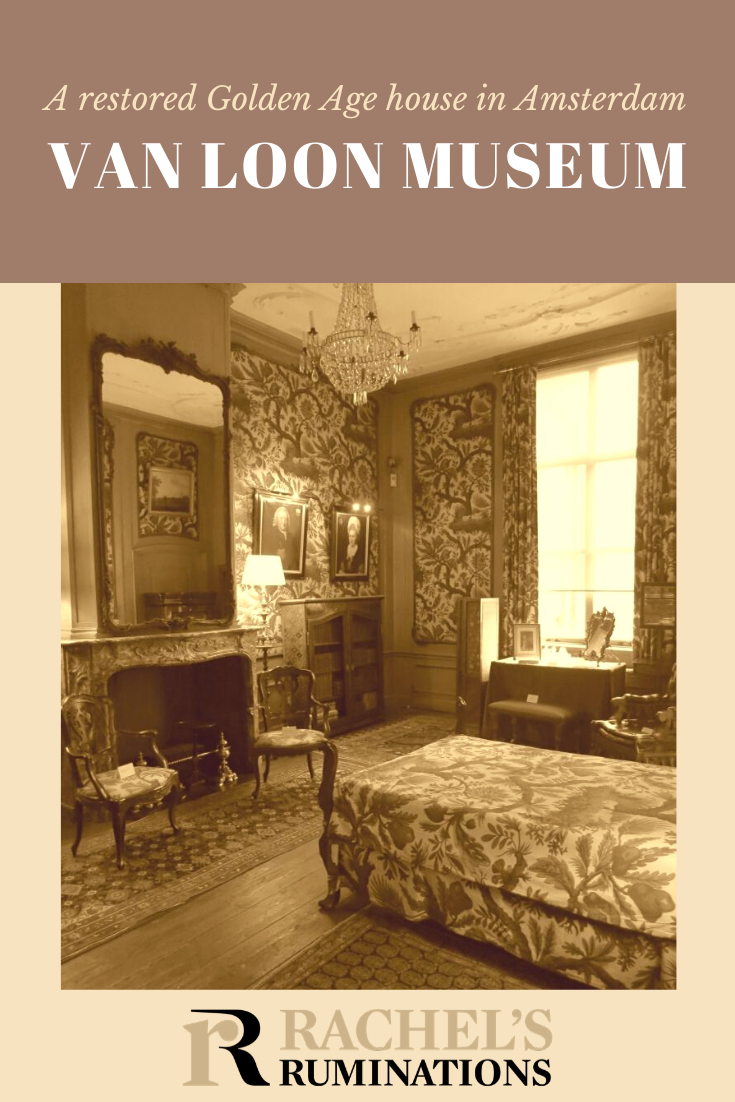 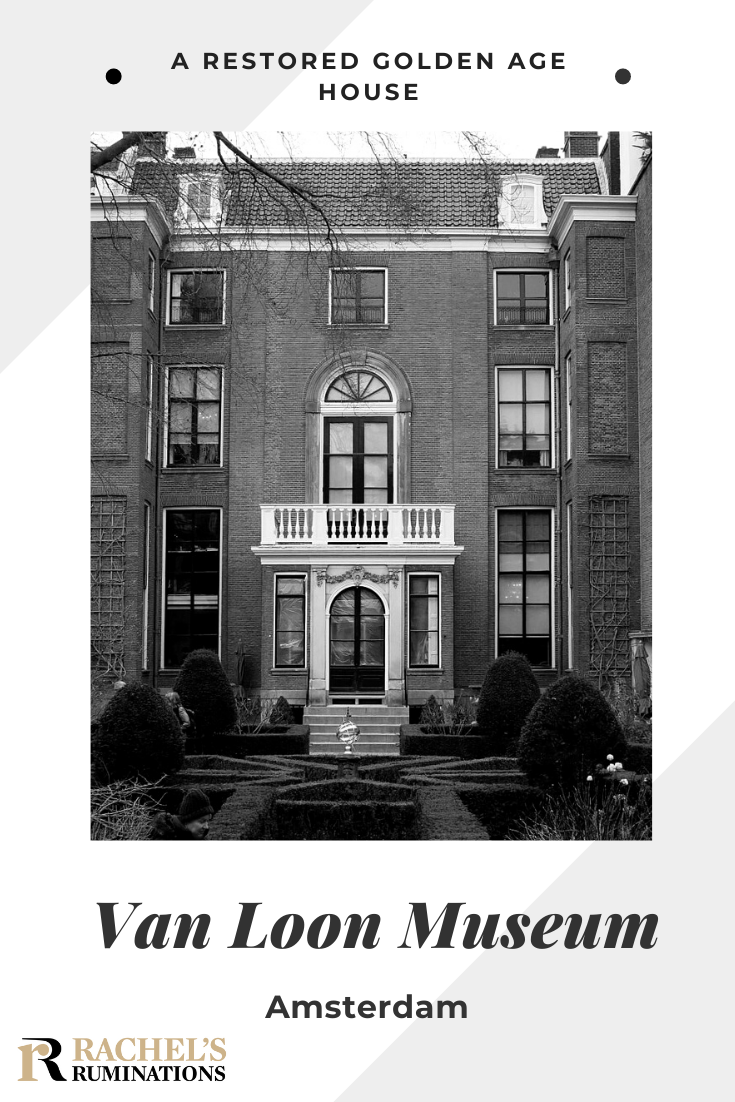 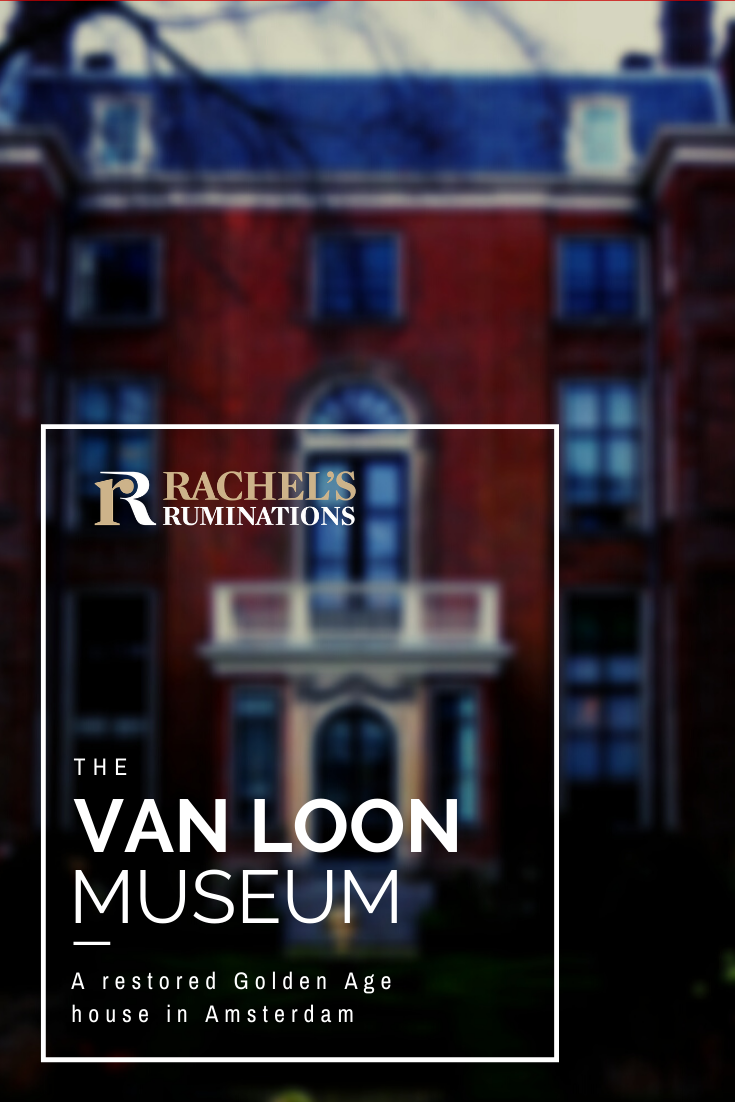 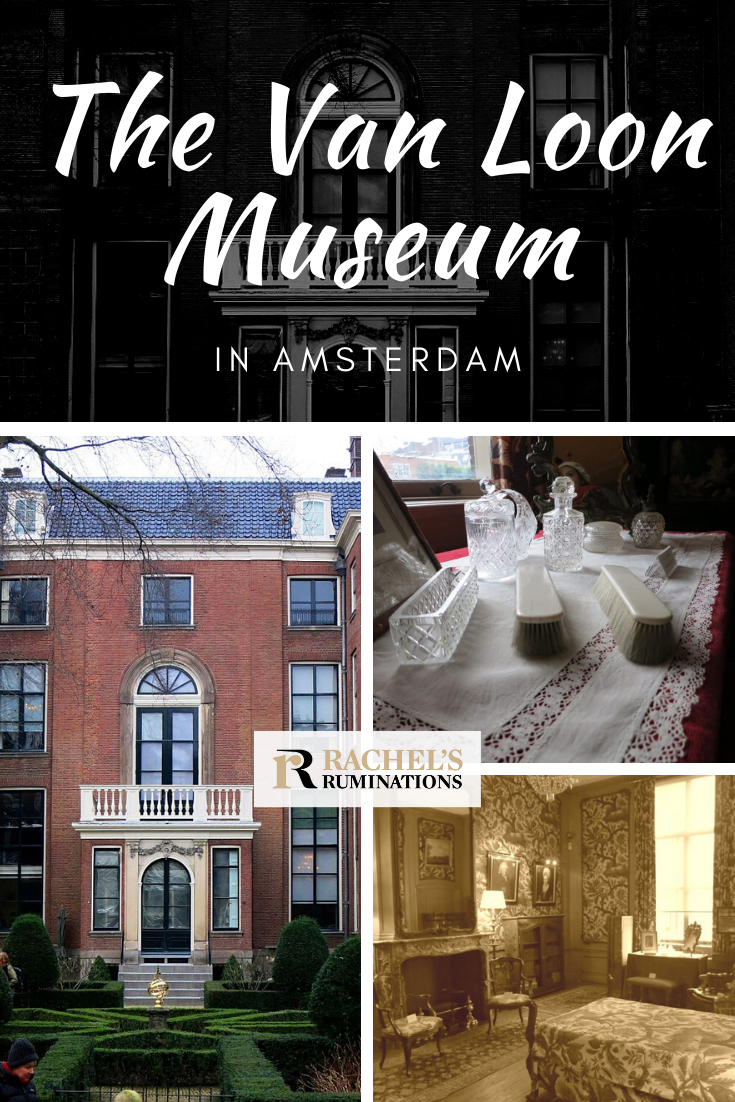 This is what I’d been expecting when we visited the Canal House Museum: rooms that give an impression of how wealthy residents of Amsterdam’s Golden Age lived and, to a much lesser extent, how their servants lived. While the van Loon house dates to that period, it is furnished to the style that reflects later – still wealthy – residents.

History of the house

This museum is named after Willem van Loon, a founder of the Dutch East-India Company (VOC). (Loon is pronounced like “loan”, by the way.) The fact is that a large proportion of the profits from the VOC was based on slavery or on other forms of oppression of native peoples. Nevertheless, houses like this are an enduring and beautiful legacy.

Built in 1672, its first resident was Ferdinand Bol, whose paintings can be viewed in the Rijksmuseum. The van Loon family didn’t move in until the late 1800’s. When they did, they filled it with their family’s history, particularly in evidence in the paintings.

The house is intact, inside and out, and has been filled with a collection of articles from several different centuries, which is, I suppose, what would have happened with a patrician family like the van Loons. They would have replaced some pieces and kept some old ones, as any family would.

There is no set route through the van Loon house, and you are free to wander around at will. There’s a lot to examine, if you’re so inclined: period furniture, paintings, porcelain, decorative moldings, chandeliers, and so on. A few signs explain the elements of each room, and notes on all of the furniture remin visitors not to sit down, but they’ve done a good job at keeping modern intrusions to a minimum. It was quite a restful contrast to the multimedia activity of the Museum of the Canals.

I was particularly drawn to the details: the items laid out on the dressing table in the bedroom, the shiny copper pots on the enormous cast-iron stove down in the kitchen. Perhaps it was because the afternoon light through a cloudy sky was so much like a Vermeer painting.

If you’re curious about other small museums to visit in Amsterdam, check out these articles:

The small garden is laid out in formal style and from the back of the garden you can look back at the house to see its elegant symmetry, somewhat marred by the asymmetry of the houses on either side.

A coach house, closed when we visited, backs the garden. It is usually used to exhibit the van Loon family’s collection of carriages, coaches, and other accoutrements that belong in a coach house.

It all seemed very much an Amsterdam-based Downton Abbey to me, with its air of old money and women swishing around in long skirts or drinking tea from very delicate china. If that’s what you’d like to see, this small museum is definitely worth a short visit next time you’re in Amsterdam.

The van Loon Museum: Keizersgracht 672 between Vijzelstraat and Reguliersgracht. Take Tram 24 to the Muntplein stop. Open daily 10:00-17:00. Admission €10/$11 for adults.