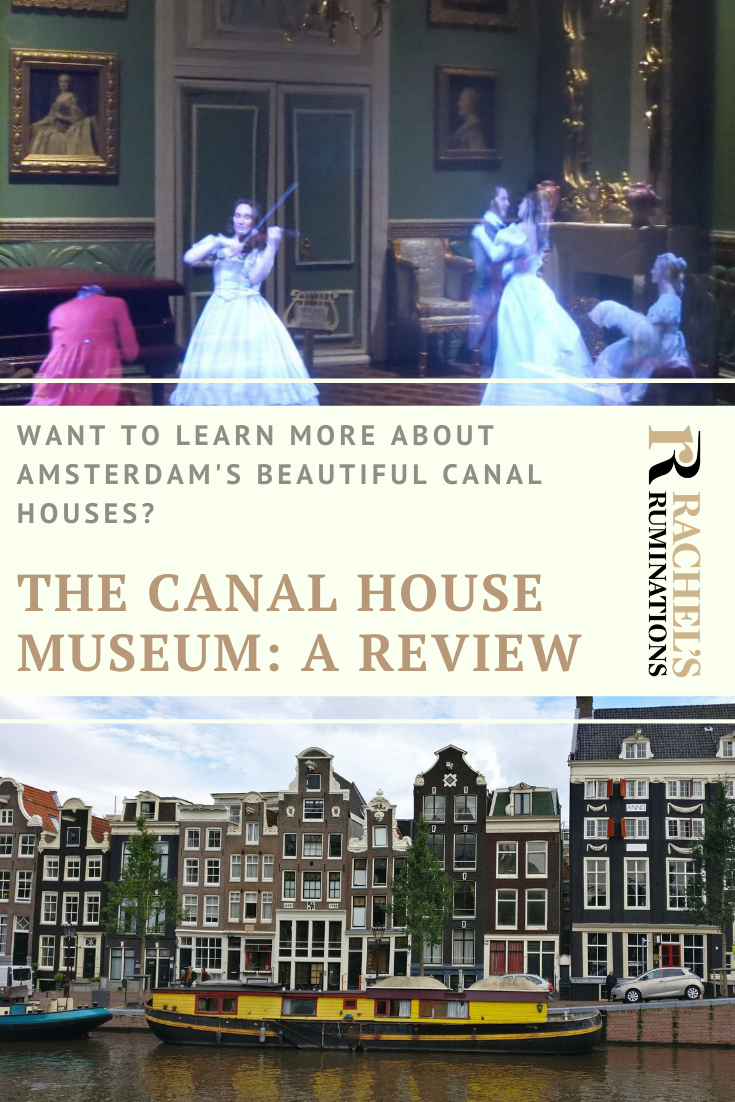 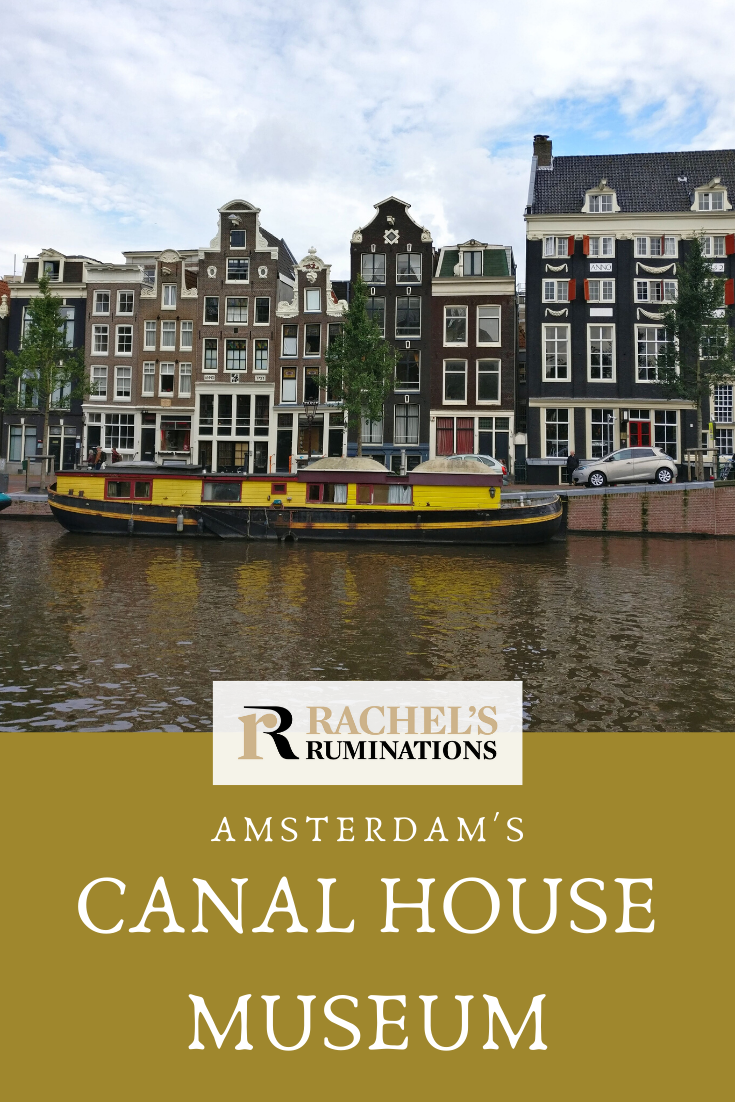 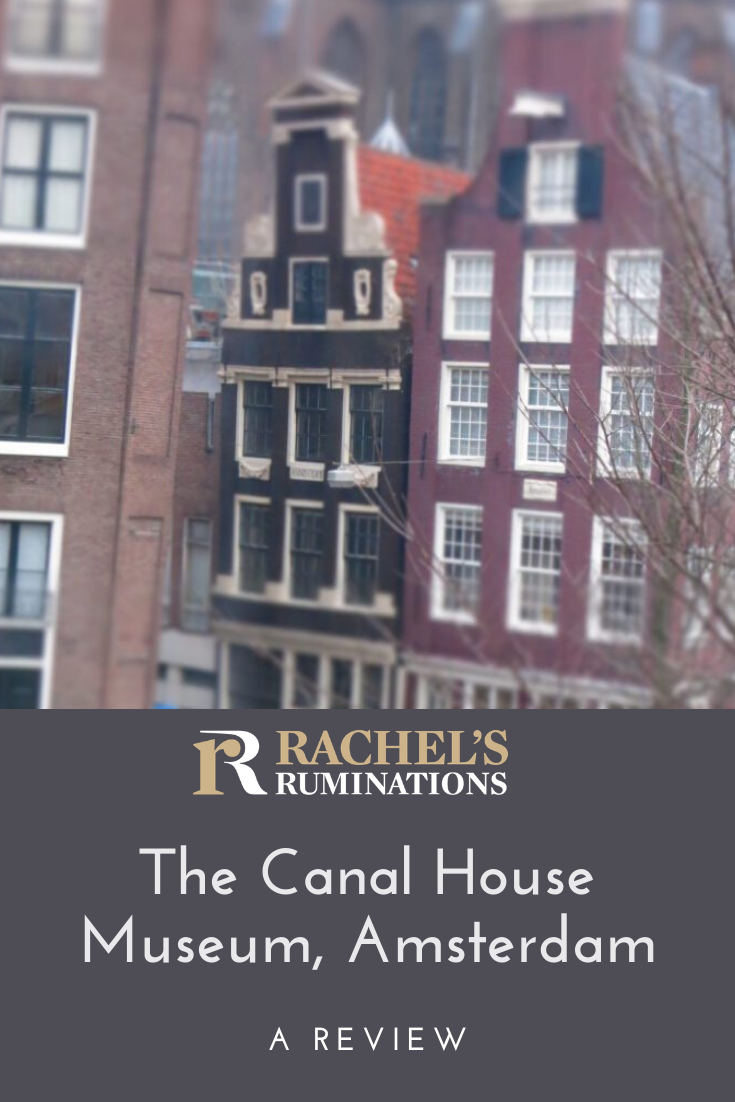 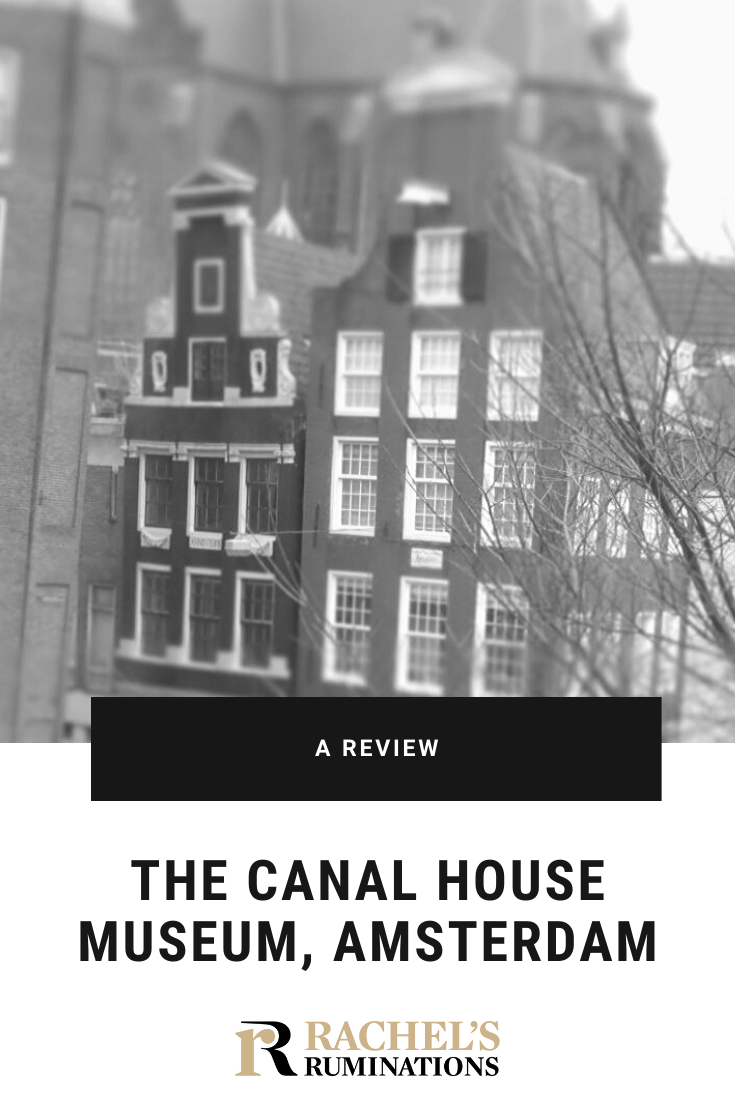 I already posted about the first of the three little museums I visited in Amsterdam with a friend: Ons’ Lieve Heer op Solder. After a bite for lunch—Burgermeester has surprisingly good burgers!—we moved on to the Canal House Museum Amsterdam (In Dutch it’s called Het Grachtenhuis.).

It’s not surprising that a canal house museum is housed in one of the many charming Golden Age row houses that fill the center of Amsterdam.

We went there expecting it to be restored to how it might have looked during the Golden Age of Amsterdam. We expected to wander the rooms, admiring period paintings and building details, drinking in the atmosphere of a wealthy merchant family of the 1600’s or 1700’s.

By the way, I’m using the term “Golden Age” only for lack of a better one. The term is misleading and, ultimately, smacks of racism. The period was only “golden” for the merchants making a fortune on the back of the slave trade and on the products of slave labor in other parts of the world.

That’s not at all what we got. Instead, the Canal House Museum took us on a sort of multimedia tour through Amsterdam’s history, from the Golden Age to the present day. At first, I was disappointed, walking into rooms that were stripped of their original adornments. But once I let myself take in what was being presented, I enjoyed myself.

In one room, for example, a mockup of the city was the stage for a series of projected animations, covering a huge span of history in very general terms. I didn’t learn much, but it was an entertaining presentation.

Another room was much more informative. In the middle stood a table, with chairs around it set up as if for a board meeting. Each chair had a label: the mayor would sit at the end, of course, and he would meet with a military engineer, a water expert, and so on. Through audio guides that were included in the tour, we heard their discussion in English. Or, rather, a series of discussions over the course of a century of the city’s expansion.

At the same time we heard their voices, maps of the city were projected onto the table. The discussion made clear the decisions they were making in each meeting: should we move the city walls to accommodate more canals and houses? If so, where to? In what format should we lay out the blocks of houses? What will we do to avoid the canals getting too smelly? How can we keep the residents safe? And so on. It was a clear explanation of how and why the city grew in the way it did in the 1600’s, and it wasn’t at all dry or dull as you might expect.

Another room had a model of canal houses in several stages of building, and explained how the processes involved in their construction. It’s hard to imagine that the piles supporting these canal houses for these many centuries are wooden. About 40 support each house, 10 to 12 meters long each. They’ve lasted so long because they’re in an oxygen-poor environment, so they don’t rot. It made me think of the construction site near my house: we endured days and weeks of that rhythmic pounding with one of those huge machines while they were placing the foundations. In the Golden Age, that was all done with hand-powered machinery!

If you’d like to learn more about some of the other small museums in Amsterdam, try these:

Also, if you’re curious about all the “stuff” that ends up in the canals, read about the Below the Surface exhibit here.

My favorite part of this unusual museum, though, was a room dominated by what looked like a dollhouse, but without the usual open side. Instead, there were windows on all four sides we could peer into. Feeling like a Peeping Tom, I did just that: gaped into each window one at a time. For each one, I could type a number into my audio guide and hear the soundtrack that went with the scene inside.

These weren’t just still scenes, however. In most of the rooms, tiny projections depicted what might have taken place in that room at some point in its history. One room looked like the 18th century, and musicians played while elegant ladies and gentlemen danced. In another a woman posed while an artist painted her portrait. A boy in the attic pushed a girl on a swing. A mother washed her child in a bathtub upstairs, singing with her, looking mid-20th century in her outfit; and a 1960s mother nursed her baby while her husband played a guitar.

These glimpses of history were charming and haunting. The projections were there—I could photograph them—yet not there—I could see through them. They felt like literal ghosts of the past.

In the same room, around the wall, was a drawing of the many canal houses. On some, there were small peepholes, allowing a look into actual, historical rooms either through paintings or photographs. Each picture had a label so we could learn what it showed, and in which time period. When it came down to it, this was just a series of pictures, yet presenting it this way made it far more interesting somehow.

Downstairs, we finally got to what we’d been expecting to see: a few rooms done to period. Yet even these had their multimedia elements, with tablets allowing us to read about what we were seeing, and audio guides explaining them as well. The most interesting part was the paintings on the walls—not hung, but rather painted right onto the walls—bucolic scenes that obscured whole doorways.

Should you go to the Canal House Museum in Amsterdam?

Don’t go to this museum expecting a restored Golden Age house, although it would combine well with such a museum. If that’s what you’re looking for, try the Museum van Loon and or the Willet-Holthuysen Museum, though in both, the decor inside reflects a later century.

Go to the Canal House Museum first. Learning about what went into the building of these houses in the Golden Age will increase your appreciation for what you see in a restored house, as well as all of the rows of houses you can admire as you stroll along any of the inner canals in Amsterdam.

It would also be a good choice if you’re traveling with children. The interactive nature of it would keep them entertained long enough for you to enjoy it as well.

Click on this link to buy tickets to the Museum of the Canals.

If you haven’t booked a hotel yet, you can book through this booking.com link.

Admission: €15/$17 for adults, which includes the audio guide.