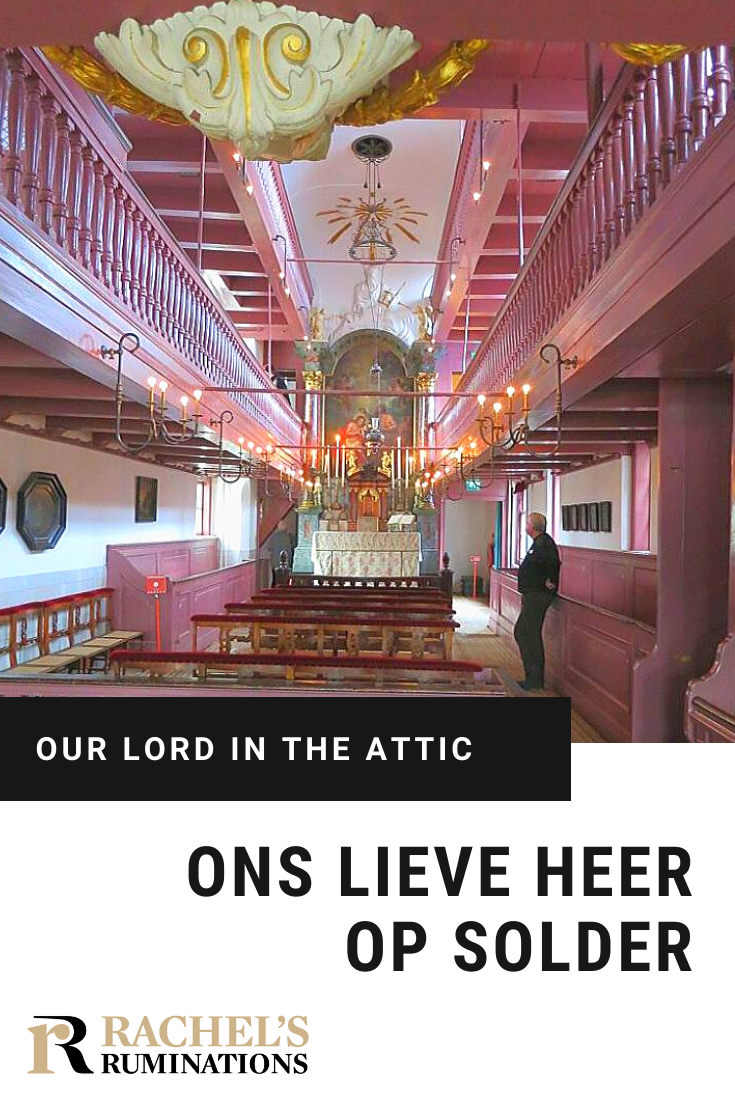 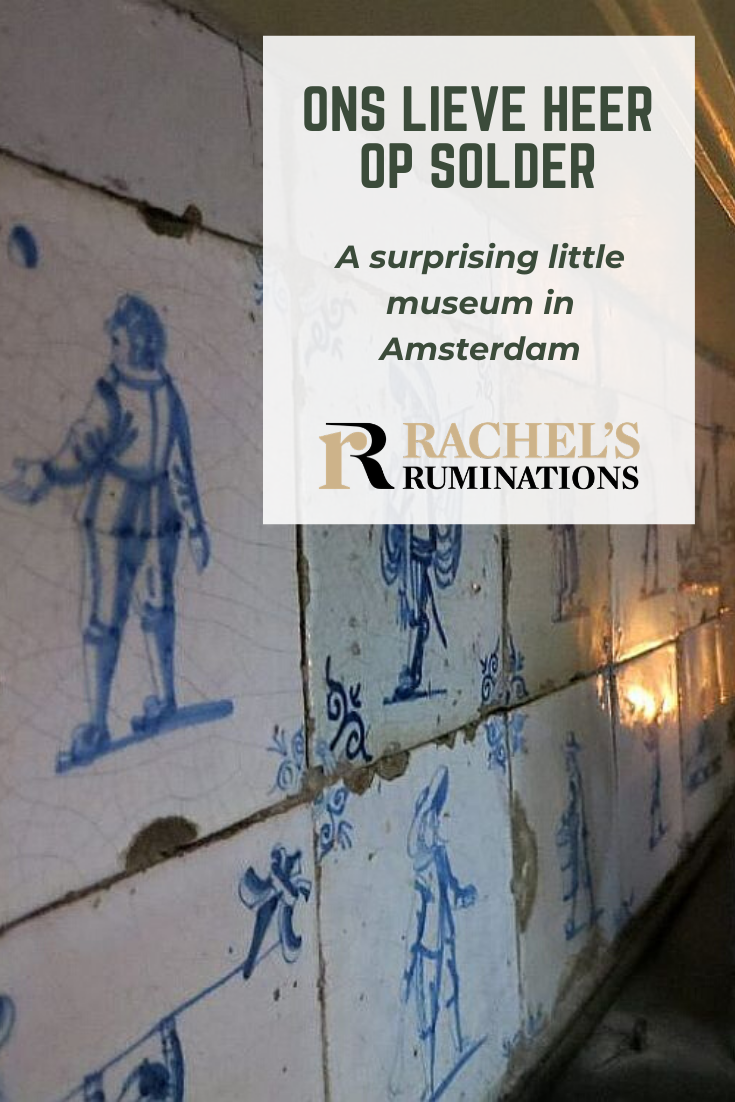 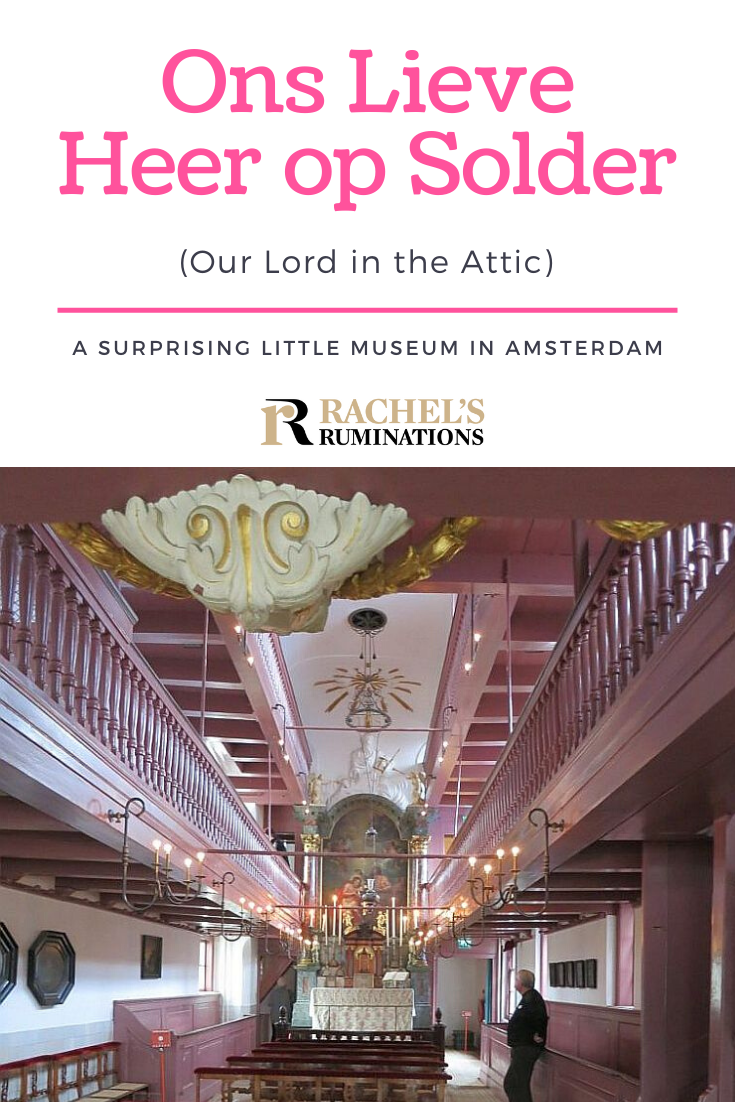 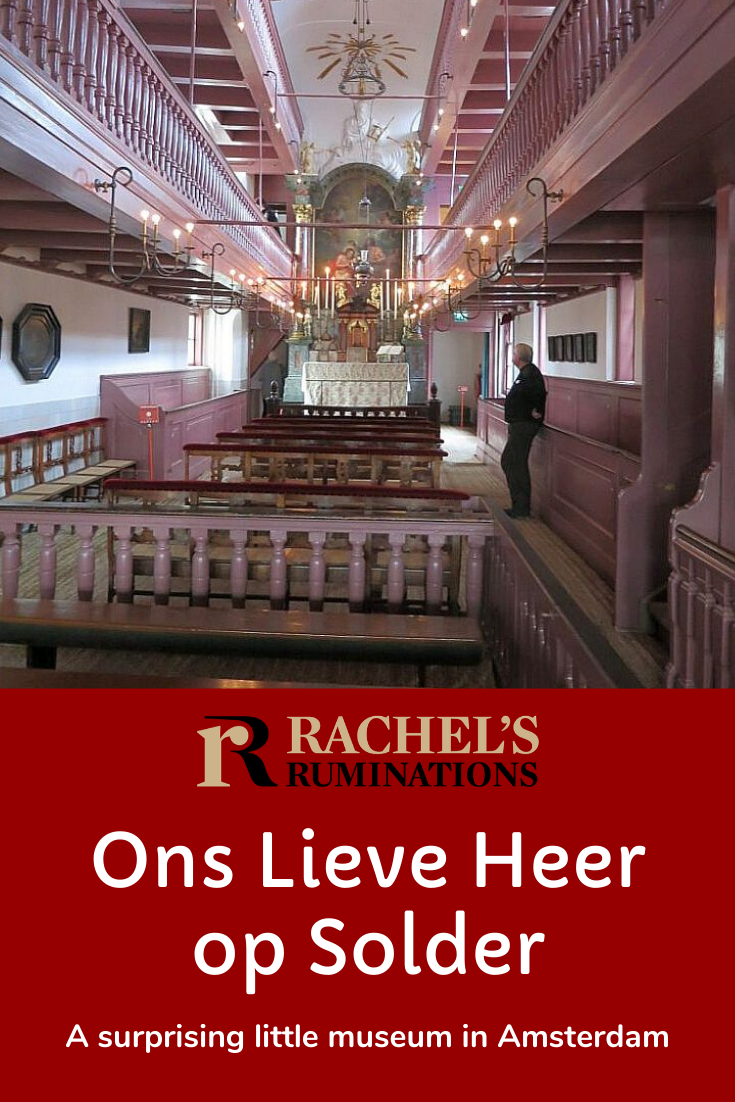 Tourists in Amsterdam, if they visit museums at all, generally hit the big ones: the Rijksmuseum and the Van Gogh, for example. But there are dozens of smaller museums in Amsterdam that are just as interesting and worth seeing. Ons Lieve Heer op Solder is one of them.

This museum’s name translates to “Our Lord in the Attic.” From the street, it looks like any of the other 17th century houses along the inner canals of Amsterdam. That façade, however, conceals a lovely hidden church.

Back in the Reformation in this part of the Netherlands, holding Catholic rituals was illegal. The Catholic churches, like the Oude Kerk nearby, were seized, stripped of their statues and other embellishments, and used for the more somber Protestant services instead.

The Catholics didn’t all convert, however. They established hidden churches. This was one of those clandestine churches, built in 1663 inside the upper floors of a typical Golden Age Amsterdam row house.

According to the museum’s website, the church was an open secret; the authorities did not allow mass, but nevertheless tolerated the church’s existence.

Our Lord in the Attic today

Entering the building, it seems, at first, to be a rather dark, simple home. The owner of the building in the 17th century lived on the lower floors of the house. The restored salon was quite grand: to impress his guests, I suppose. The furnishings were simpler upstairs, with bedstees, which are beds inside a closet in the wall.

The stairway is steep and dark, and the ceilings low. I heard, through the audio device that comes with the entrance fee, that every week 150 people walked up this stairway to attend mass, and they had to walk right through this man’s home.

You can imagine that with that many people filing in and out every Sunday, the church’s existence would be a hard secret to keep. Fortunately, Dutch society even then was relatively tolerant.

Despite the fact that I knew I was climbing up to a church, my first sight of it was a surprise. I expected a small, narrow, cramped space, badly lit and sparsely furnished. It was anything but that.

Emerging at the top of that dark stairway, I saw a huge space, three stories tall, filled with light, despite the overcast outside. What these Catholics did, back in the mid-seventeenth century, was to partially remove two floors inside the building. They cut through the cross-beams and replaced some of them with metal bars. They combined three floors of space in this and two neighboring houses to create a beautiful, fully-fledged church. The light comes from windows on three sides, above the roof-line of the neighboring houses. It’s truly impressive. I can imagine it’s even lovelier when the sun is shining.

I expected, when I went in, to spend perhaps a half hour to see a little attic church. Instead, it was over an hour because the audio tour was so interesting. The whole space has been carefully restored to its 19th century look, which explains the pinkish-purplish paint and the gothic-themed wallpaper, reproduced from remnants that were found during renovation.

Our Lord in the Attic is an impressive museum and an enduring place of worship—it is still sometimes used for masses or weddings. It is well worth a visit if you want to see something that’s a bit off the beaten track, but of clear cultural and historical value. A short walk from the Amsterdam central train station, it’s also a great choice if you have only a few hours and want a quick taste of the Golden Age of Amsterdam.

Note: I wrote this article before Ons Lieve Heer op Solder went through an extensive renovation. A neighboring building has been added and become the main entrance; it is connected to the historical building through an underground passage. The new building, besides offering facilities like educational space, a cafe and a shop, provides space for extra exhibits. One, called “Voices of Tolerance,” stresses the importance of religious freedom. Another new exhibit shows objects from the excavation of an 18th century cesspit.

If you’re planning a trip to Amsterdam and still haven’t booked your hotel, use this link.

Information for visiting Our Lord in the Attic