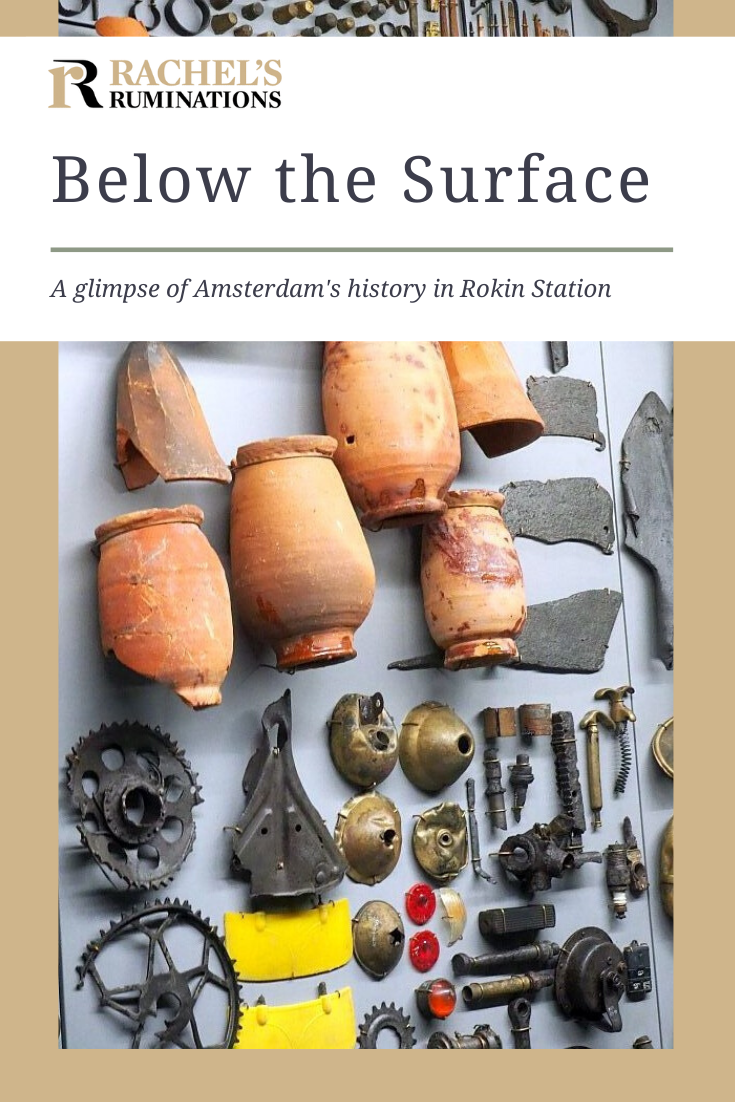 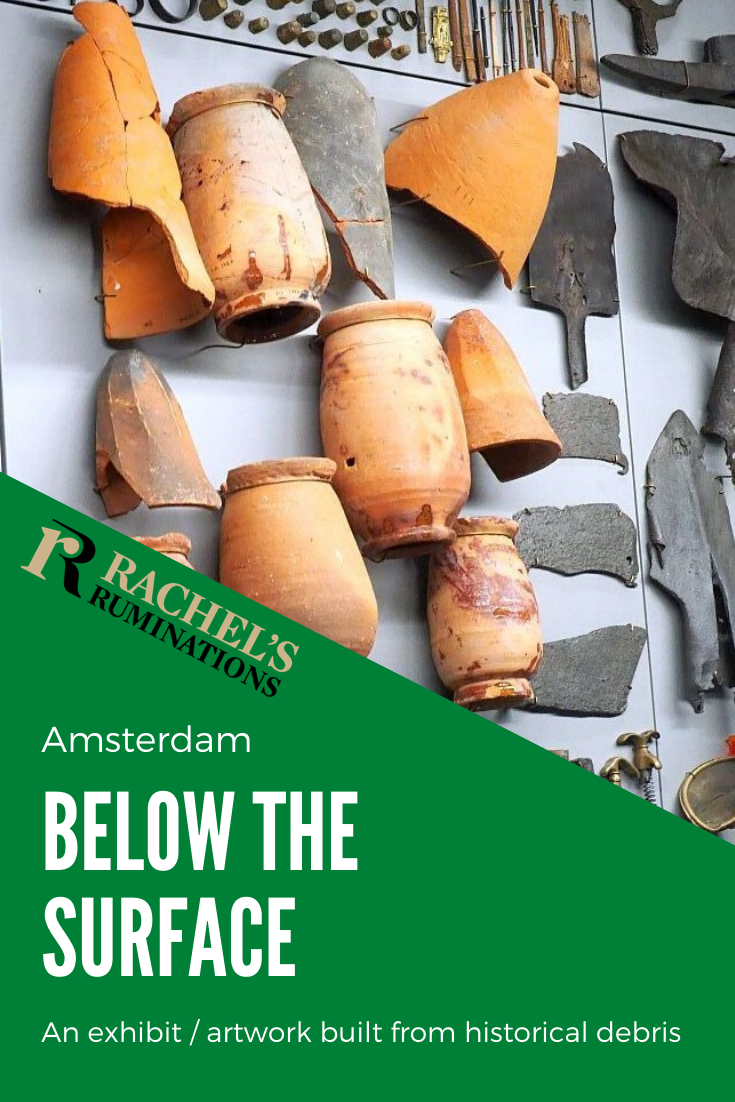 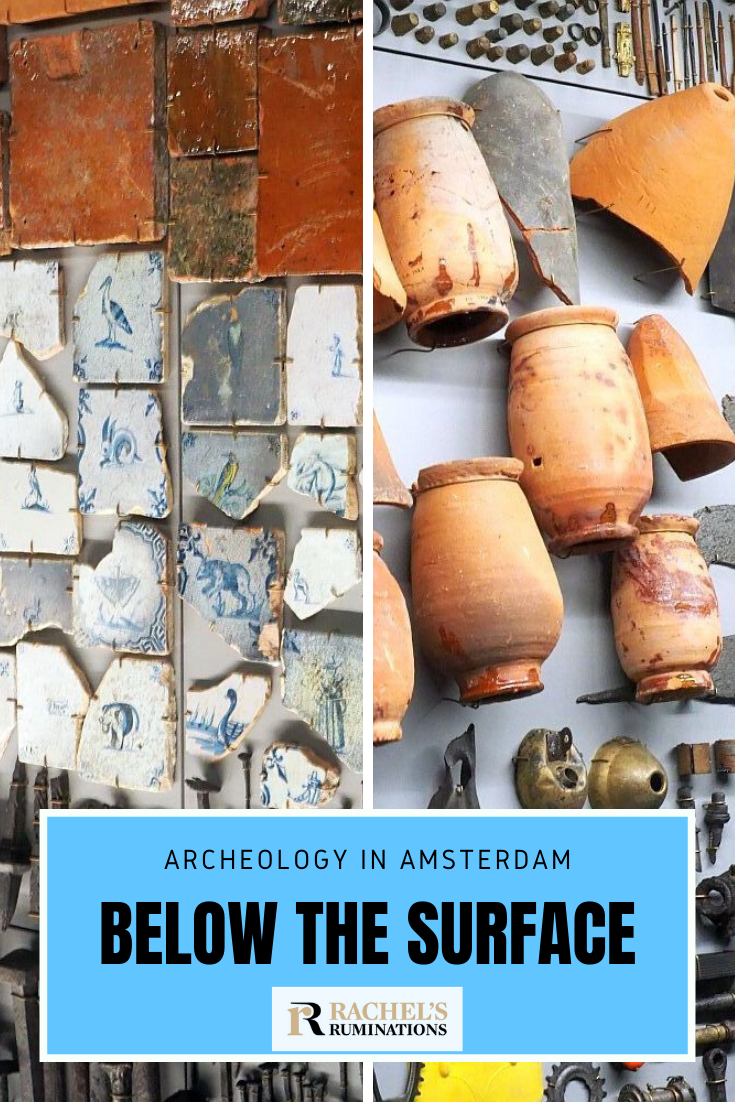 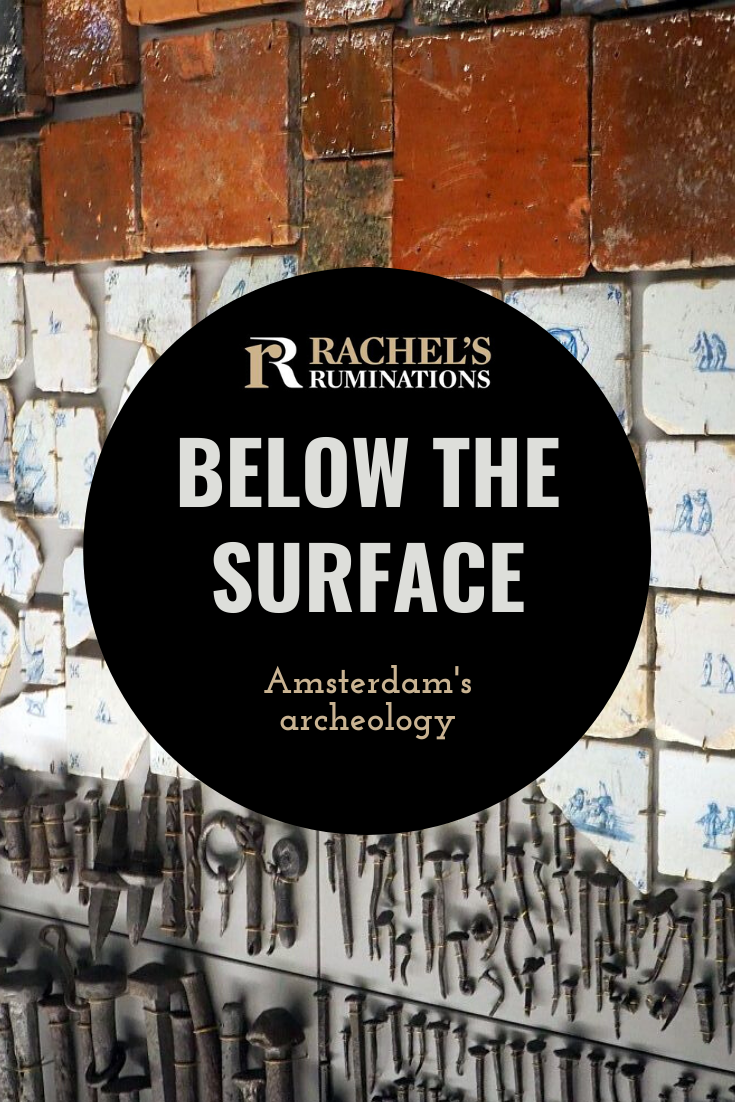 When I went to see Below the Surface in Amsterdam, to be honest, I hadn’t done my research. Just a quick internet search, and I added it to my list of what I might see that day in Amsterdam. I expected a museum, a small one, in or near Rokin metro station, since that was its address.

Archeological finds from building the new metro line: that’s all I knew about it, and that’s what I got.

It turns out that Below the Surface is not a museum; it’s an exhibit of sorts. Or maybe I should call it a display.

Or perhaps I can describe it more accurately as an artwork, or rather two artworks. Mostly, though, it’s a website.

First, some background. Starting in the late 1990s, the city of Amsterdam began to plan and then build a new metro line, going north and south of Amsterdam Central Station. The problem, as you can imagine, was the age and value of the buildings in central Amsterdam; the whole middle of the city inside Singelgracht is a UNESCO site, and the line had to pass straight through it.

The solution, then, was to build the tunnel following existing streets and old former waterways, including what used to be the Amstel River, and to bore the tunnel through rather than digging from street level. The designers of the new line set the depth of the tunnel far below the deepest wooden pilings supporting the historic buildings it passed.

(Yes, those historic houses in Amsterdam are still supported, for the most part, on the original wooden pilings from centuries ago. Check out the Museum of the Canals to learn all about it.)

Construction started in 2003 and went on until 2018. The stations, unlike most of the tunnels, were built by digging down from the surface, and the archeologists focused their attention there. By digging down, they could see the layers of history and place whatever they found in its historical context. Four of the stations are located where rivers or streams used to flow.

Archeology below the surface of Amsterdam

Not surprisingly, places where water once flowed are rich archeological sites. Think of all the junk dredgers pull out of rivers and canals these days – more bicycles than anything else here in the Netherlands. Objects have landed in waterways, whether accidentally or intentionally, for centuries.

The excavations on the North-South metro line went further back than even the earliest human habitation, and examined how the river itself evolved.

Human presence – not necessarily settlement – started in the late Neolithic or early Bronze Age and extended through the Late Bronze to the Late Iron Age and through the region’s Roman period (up to 450 AD). It was, essentially, a peat bog, so it seems that people passed through but didn’t settle. Later the land was drained to allow farming, and at that point settlements appeared.

After a series of floods in the 12th century, the Amstel River became connected to other actively used waterways, making it a good place for a trading settlement. The objects that form the exhibit called “Below the Surface” are basically debris, dating from the 13th to the 19th centuries, that fell or was discarded into the Amstel.

Both Damrak and Rokin metro stations are where the most items were excavated, both located where the Amstel River used to flow.

Damrak metro station’s site is where an important bridge once stood connecting the two banks of the river. Originally wood, then later stone and, later still, brick, it was an important harbor entrance. Shipping-related objects would be found there, as well as commercial objects since all sorts of economic activity happened around the crossing. In the 16th century this bridge was part of the city’s defense, so military debris would end up in the water as well.

On the other hand, today’s Rokin metro station stands where once an inland harbor teemed with boats coming and going, carrying merchandise. With all that economic activity and the city crowding around the harbor, it’s not hard to imagine the kinds of waste that would end up in the water.

Make sure to check out my whole series on small museums in Amsterdam as well as my article on Amsterdam Central train station sightseeing!

In total, archeologists working on the north-south line recorded 697,235 finds, mostly from Damrak and Rokin, but also including fewer than 2000 pieces from other sites. The numbers include each individual fragment of broken pieces, so perhaps a more realistic indicator is the number of “records,” where pieces of a single object put together count as one: 134,282. Still pretty impressive, isn’t it?

In order of frequency, the most common object was ceramic, then bone, metal, leather, pipe clay, glass and building ceramics. Most of Damrak’s objects come from 1450-1600 while most of Rokin’s come from 1650-1875.

The project’s website (where I got most of the information for this article) goes into far more detail about all of the processes archeologists used to draw conclusions from what they found and where they found it.

The website also shows photographs of the objects. All are carefully catalogued – the catalogue is called “Stuff” – by function, time and space. They are arranged according to city functions like “building and structures,” “interiors and accessories,” “craft and industry” and so on. There are 10 categories in all, shown in 11,279 pictures.

On the website you can search the catalogue in a variety of ways, and you can make your own display, choosing objects to illustrate your own interests. Or you can click on “object stories” and get more information on particular objects and their context.

Designed by Daniel Dewar and Gregory Gicquel, the artwork in the new Rokin Station incorporates 9500 of the archeological objects as well as large mosaics on the walls of the station that reflect themes deriving from the objects.

The objects are displayed in two long cases, on a slant, extending between the up and down escalators at the north and south ends of the station. One is 12 meters long and the other is 14 meters long.

Closely placed in the cases, the objects are grouped by function. The display gives a fleeting impression rather than an opportunity to study individual pieces. There are no labels or informational signs. For detail, you’d have to visit the website’s page about the Rokin Station exhibit. There, you can view each of the cases as one image, zoom in and click on an individual object for more detail.

The escalator can’t be slowed or stopped, and no other way to peer in at the objects in real life is available. The result is more of a glimpse of quantity – Wow, what a lot of old objects! – rather than an understanding of what the objects actually are.

Yet, as you pass – and I have to admit I went up and down a number of times – some objects stand out: bones, pottery, Delftware tiles, a large ship’s anchor, and lots of iron nails.

I ruminated a bit as I traveled up and down the escalators:

Below the Surface is not a museum. It’s a teaser, it seems to me, for the associated website. That doesn’t make it any less valuable or worth seeing.

How to get to Below the Surface at Rokin Station

There are a number of ways to get to the Rokin Metro Station. It’s quite central, so from many of the tourist hotels it’s within walking distance. However, the two displays are inside, after the ticket barrier.

The North-South metro line is number 52.