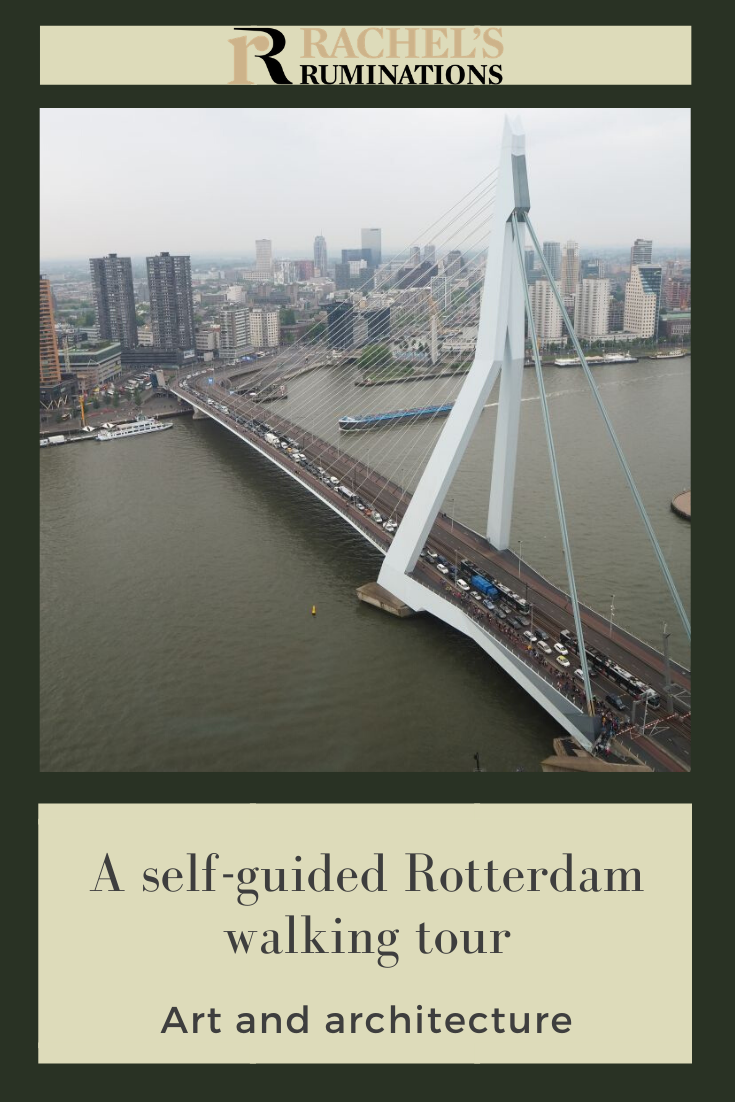 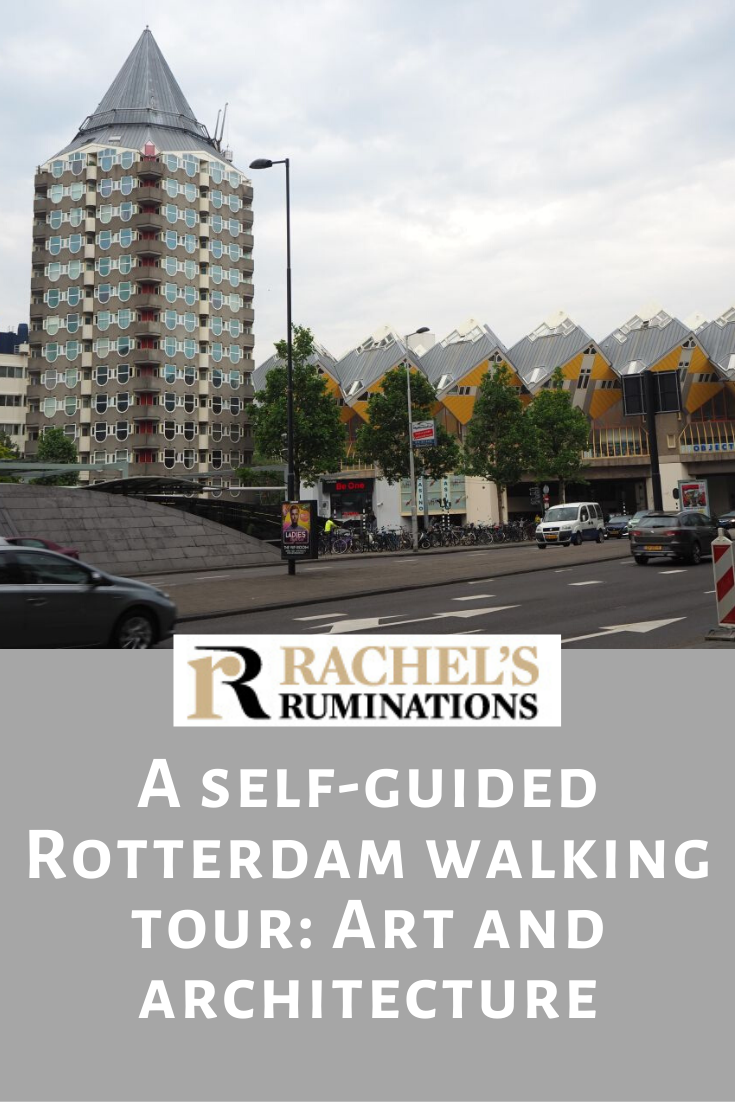 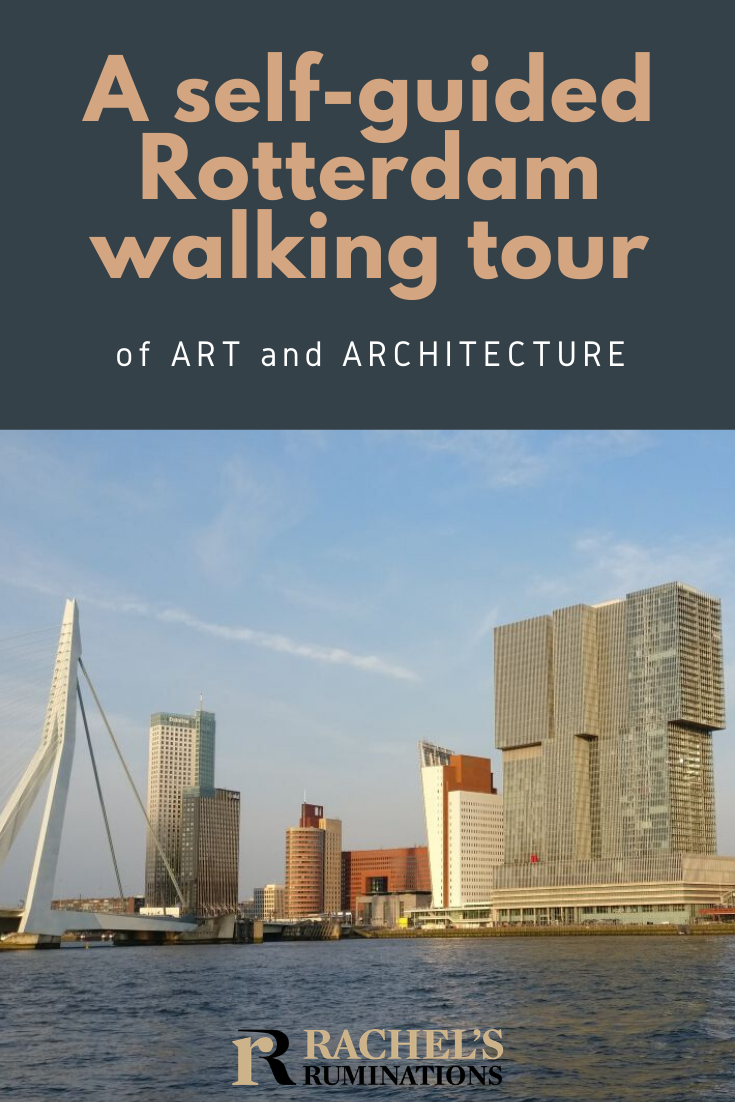 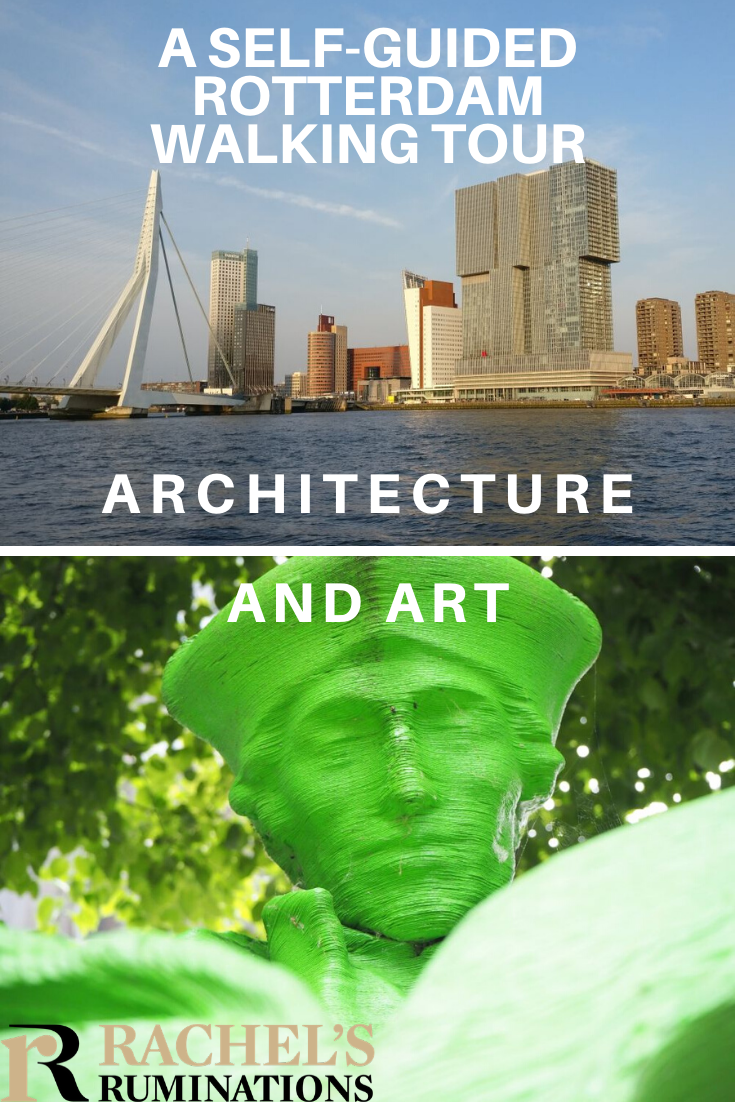 Rotterdam is famous for its post-war architecture, mostly because a World War II bombing in 1940 destroyed much of the city. Yet it didn’t just rebuild and settle in; it is still constantly changing, expanding and reinventing whole neighborhoods. On a recent visit, I took a tour of a few new buildings, but I also passed other interesting ones – both pre- and post-war – on the way to and from conference venues and my hotel. This self-guided Rotterdam walking tour is the result.

Disclosure: This article contains affiliate links. If you click on one of them and make a purchase, I’ll receive a small commission. This will not affect your price.

I have listed the buildings and art in the order that makes most sense to me as a walking tour of Rotterdam, and I’ve divided it into two parts. The first makes a wide circle on the north side of the Maas River. The second part takes you across the Erasmus Bridge to the redeveloped Wilhelmina Pier.

The map below shows all the points I mention in this article. You can use it to decide your own route, or follow the order as it is. Click on the square at the top right of the map to see the map full-screen, including my key. Alternatively, click on the icon at the top left to open the key in this window.

Depending on your fitness level, you might need to do the tour over two days rather than trying to see everything in one day. The other option would be to rent a bike or borrow one from your hotel and bike from stop to stop, which would make it quite doable in one day.

Keep in mind that I’m no architecture expert, and there are lots more new or newish buildings scattered around Rotterdam that are worth seeing. These, though, are the highlights, in my view.

If you’d rather follow an expert, you can take a professional architecture tour in Rotterdam; click this link for a list of tours to choose from.

While I already wrote about Rotterdam Central Station in my last post about the De Rotterdam Architecture Tour, we’ll start there anyway because you’re likely to come in through here, or at least it’s easy to find from any metro or tram line.

Completed in 2014, designed by Adriaan Geuze, the building of Rotterdam Central Station led to a revival of the whole area around it. It really is an imposing design, isn’t it, with that soaring point on the front? Make sure to go inside too. The large screen on one side shows images of the Port of Rotterdam, the biggest port in Europe.

This pre-war building used to be the city hall of Rotterdam, opened in 1920. Take a good look at it. A golden eagle of peace tops the tower. Statues on the exterior honor prominent Rotterdammers, and you can also spot images of various virtues like trustworthiness and determination.

What you’ll also notice on the stadhuis is damage to the exterior: pockmarks. These are scars from the 1940 bombardment of Rotterdam that destroyed most of the city.

The Stadhuis is a working city office building, open Monday-Friday 8:30-17:00.

Designed by Rem Koolhaas, this “horizontal skyscraper” would be easy to overlook from street level. It was opened in 2015, and you can read a bit more about it in my post about De Rotterdam Tour. Make sure to at least go into the lobby.

This statue dates from 1622, made by Hendrick de Keyser. Erasmus was a Dutch Christian humanist scholar, born in 1467 in Rotterdam.

Looking a bit forlorn surrounded by some ugly 1950s and 60s buildings, St. Laurens is the only remaining building from the medieval period left in Rotterdam. Its current form dates to the 15th and 16th centuries. It was heavily damaged in the war, but restored afterwards.

From March to October, you can climb the tower of St. Laurens Church with a guide for €5: on Wednesdays at 14:00 and Saturdays at 12:00 or 13:30. You can buy the tickets the same day inside the church.

Piet Blom designed this tall apartment house, commonly called the “Potlood,” which means “pencil.” You can see why. It was built in 1984: not my favorite architecture, but significant because Piet Blom was the architect.

The next stop on our Rotterdam walking tour is the Cube Houses, what Piet Blom is most known for. Probably the most famous post-war architecture in Rotterdam, they were finished in 1984. The original plan included 74 houses, trimmed down to the 38 that were actually built.

Blom’s idea was to develop housing on a human scale, which is why the Cube Houses surround and overlook pleasant small plazas above street level. The idea was that the house stands on the “trunk” of a tree and the houses themselves form the branches and leaves so that the cluster of houses represents a forest.

One of the houses is open to visitors. Climbing the stairs from the front door, you step into the living room, with windows at a 45-degree angle tilted inwards. Nevertheless, it doesn’t feel too small, since the furniture – two sofas in this living room – is built in. Around the corner is the kitchen, with its worktops also built in and the windows leaning outwards. Upstairs are two bedrooms with similar 45-degree windows, leaning in or leaning out. In this particular house, one of the bedrooms is furnished as a workspace. On the top floor is the most attractive room, which could be used as a bedroom or study and has windows on all sides. Despite the odd shapes, it made a pleasant, cozy impression.

This apartment/office building/marketplace opened in 2014. Make sure to go into the marketplace under the arch of the building to admire the massive artwork on the inside of the arch. It’s by Arno Coenen and it’s called “Horn of Plenty.” The apartments must have an unusual shape on the inside, with that curved wall and windows that aren’t vertical.

This elegant statue (1995) by Kees Verkade is called Triomf (Triumph).

Once housing Rotterdam’s water board, this lovely building with baroque detail was built in 1665 for Rotterdam’s water control board, a powerful organization at the time. In 1811, Napoleon slept here. The interior was destroyed in a fire in 1864, then rebuilt to house a museum. Today it is home to Rotterdam Partners, a marketing agency focused on promoting Rotterdam.

This is a copy of the Erasmus statue at the Saint Laurens Church pictured above. This version, though, is a 3D-print by 3D-Robot Printing, 2017. It stands in the garden of the Rotterdam Tourist Information office, a good place to get information or pick up a souvenir or two. Open every day 9:30-18:00.

Created by Paul McCarthy, this statue is good for a giggle. Depicting Santa holding a Christmas tree, Rotterdammers generally refer to it, with typical Dutch bluntness, as the “butt plug Santa.” It’s had several homes, since no one wanted it in their neighborhoods, but it seems to have settled here on the Eendrachtsplein.

Designed by William Alsop, opened in 1960 and renovated in 2013, Pauluskerk has shifted its focus. While at first it was primarily just a church, nowadays it also focuses on good works with vulnerable groups in the community such as drug addicts, the homeless and illegal immigrants.

(Don’t be put off by those directions. Ask at the ticket office for a metro line map and you’ll see it’s pretty straightforward: one stop, change trains at Beurs, then one more stop, get off at Leuvehaven.)

On the other hand, if you still have the energy, the next stops are still within walking distance. I guess it just depends on your level of fitness.

While this one doesn’t turn up on most lists, I just think it’s a fascinating design in terms of how that top floor is cantilevered out over the street. This Rotterdam walking tour takes you right by it anyway, if you want to cross the Erasmus Bridge.

While the Inntel opened on this site in 1989, this unusual tower wasn’t built until 2007. The two topmost floors (15th and 16th) are used for meetings and events. The theme of the hotel is “sight on water,” referring to its location overlooking the river. (If this hotel appeals to you, click here to book a room!)

The Erasmus Bridge has become a symbol of Rotterdam, with its dramatic sweep of cables. If you like numbers, you’ll want to know that the bridge is 802 meters long (2,631 feet). Designed by Ben van Berkel and opened in 1996, its color, apparently, is the average color of the sky in Rotterdam.

Right on the other side of the Erasmus Bridge, you’ll see this amusing design, leaning on what looks to be a supporting pole. Home to KPN, a telecommunications company, it opened in 2000, designed by Renzo Piano. The top section, a sort of false front, is a huge light wall, used for advertisements and artworks. Things happen fast in the world of Rotterdam architecture: the entrance level was redesigned in 2017.

The very large building right next to the Toren op Zuid is De Rotterdam, designed by Rem Koolhaas and opened in 2013. I wrote about it in more detail in my post about De Rotterdam Tour.

This little building, surrounded by tall apartment buildings, used to be the head office of the Holland-America Line. This was before air travel for civilians, and it wasn’t about today’s cruise ships either. From this place, the Wilhelmina Pier, thousands of people from all over Europe boarded ships to sail to America, hoping to make a new life for themselves.

Today the building is a hotel and restaurant. (If you’d like to stay there, click here!) Make sure to notice the ventilation pipes from the nearby underground parking garage. I think it’s so clever how the designers made them suggest the old steamship exhaust pipes.

If you need a place to stay in Rotterdam, click here for the booking.com listings.

What next on your tour of Rotterdam?

At this point, you’re at the end of the road and the end of your Rotterdam walking tour. The nearest Metro station is back where you came from, past De Rotterdam to the Wilhelminaplein metro station.

Your other option from the Hotel New York is to cross the footbridge away from the Maas River to the Katendrecht neighborhood. This area, formerly quite dilapidated and ignored, is experiencing a comeback. You’ll find plenty of places to eat and drink, starting right at the other end of the bridge at the Fenix Food Factory. This old warehouse is now a collection of food-oriented start-up businesses. (Hours vary, but all are closed on Monday).

And one more: Delfshaven

Delfshaven is not on the walking tour because it’s further away, but if you have the time maybe you can get there another day. This is the only part of the city that didn’t take heavy damage in the 1940 bombing. Here you can see what Rotterdam must have been like before the war: complete with canals, centuries-old brick rowhouses and all. It’s quite a contrast to the rest of the sights!

I hope you’ve found this tour useful. If so, please share it on social media so others can find it.